Cherry Salmon with Heart of Palm

Spot Prawn with Corn and Sishito

Black Cod, its Skin and Chestnuts

This unforgettable evening was an auction lot built around an all-access pass to wines from my personal cellar paired with dinner donated by Saison that was sold at the most recent Festa del Barolo to support children’s pediatrics at the Mount Sinai Hospital. I would like to extend a huge ‘thank you!’ to our patrons for their extraordinary generosity. This dinner raised $55,000, 100% of which went to charity. I have been fortunate to enjoy many spectacular meals at Saison over the last few years. This may have been the best, and that is saying a lot. Chef Laurent Gras and his team presented a stunning series of courses on an evening night that was truly amazing. Gras has really succeeded in weaving together menus that hit some of the Josh Skenes favorites with many new dishes that beautifully capture the essence of the Saison style that marries elements of stark minimalism and intense flavors, often with the influence of fire in its many guises. 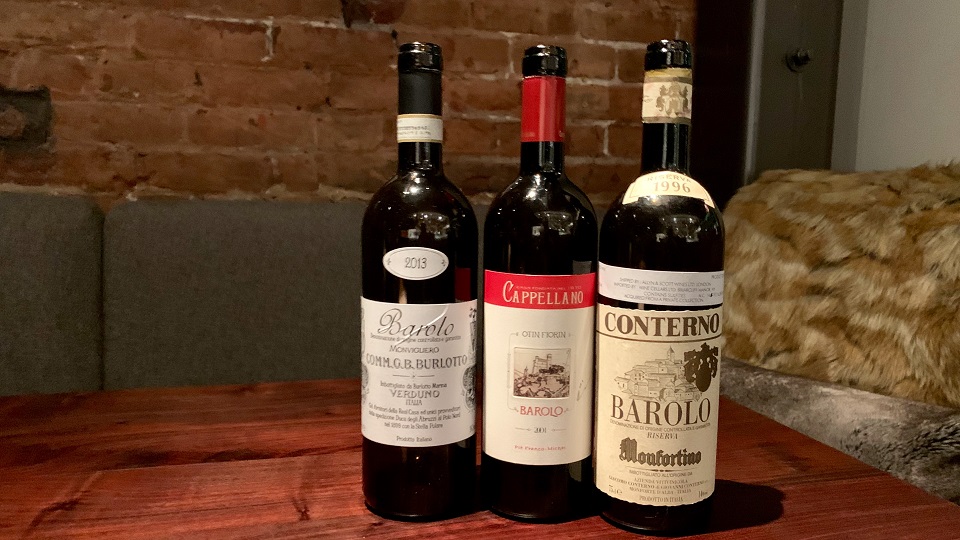 The Barolo flight is off the charts

As for the wines, well, they were just stellar. We opened them about an hour before dinner, starting with the white Burgundies, which I feel need a lot of air to be at their very best. Wine Director Mark Bright and Sommeliers Giacomo Latona and Joo Lee did a fabulous job with wine service throughout the night. 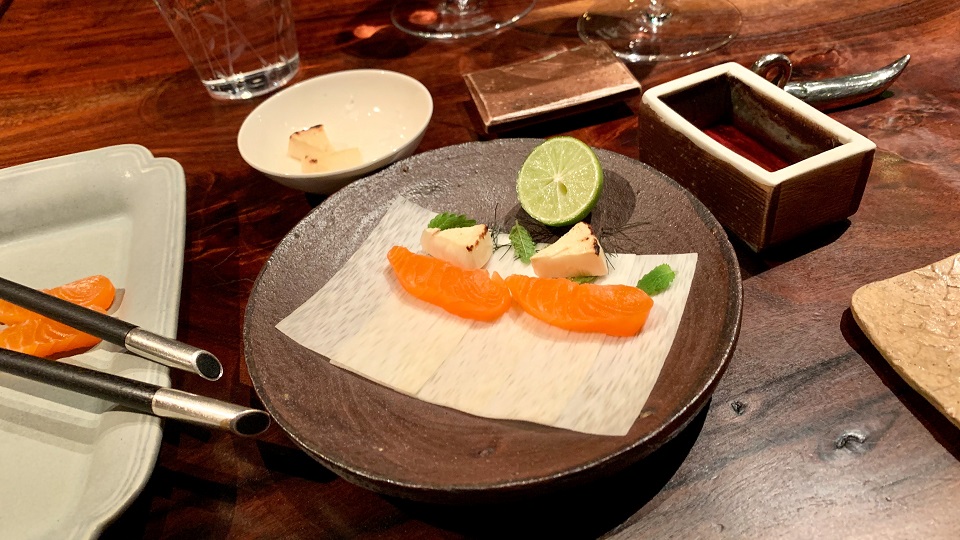 Cherry Salmon with Heart of Palm

It’s hard to know where to start, as so many dishes were unforgettable. The Cherry Salmon, served raw, on rice paper, with hearts of palm and a light sauce, was divine and also a terrific example of the minimalist Saison aesthetic. Krug’s Grande Cuvée 167ème Édition continues to impress for its depth, richness and sheer beauty, all of which are made especially remarkable given that this release is based on the highly challenging 2011 harvest. The 167ème Édition is gorgeous. Sadly, the 1996 Vintage is a bad bottle, and I choose not to serve it. Raveneau’s 2010 Chablis Blanchot Grand Cru is a bit more open and slightly more tropical than a bottle I opened last year, but that is not a bad thing at all. If anything, this bottle of the 2010 Blanchot is quite giving. The 2005 Chablis Forest 1er Cru from Dauvissat is supremely expressive, especially in its bouquet, where a whole range of candied lemon peel, mineral and floral notes all open up. This is such a beautiful wine, and just in the perfect spot to deliver maximum pleasure. 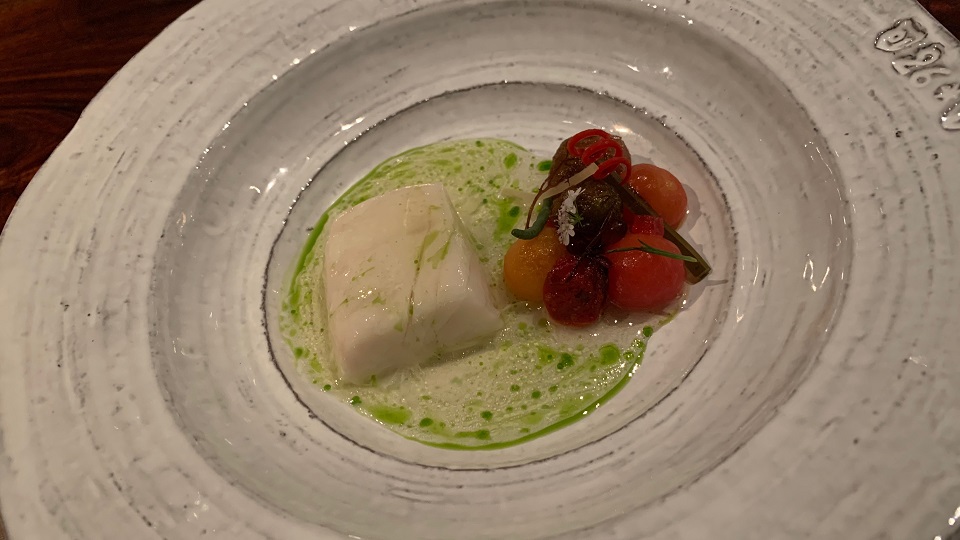 I love the halibut, and especially the succulent roasted tomatoes that, for a moment, seemed to extend the feeling of summer on this autumn night. The Santa Barbara spot prawn is another dish that just tastes of the sea. Both are terrific with a pair of stunning Meursaults. Roulot’s 2010 Meursault Charmes 1er Cru is off the charts. Fresh, taut and wonderfully vibrant, the 2010 has developed beautifully over the last few years. At nearly ten years of age, jt is just entering a plateau of maturity. I was absolutely blown away by Comte Lafon’s Meursault Charmes 1er Cru. Wow! What a wine! Creamy and expansive on the palate, with tremendous depth, the 2010 is just stunning. All four white Burgundies, purchased in France on release, were fabulous. I checked back on all four at the end of the evening, and they were all in great shape. 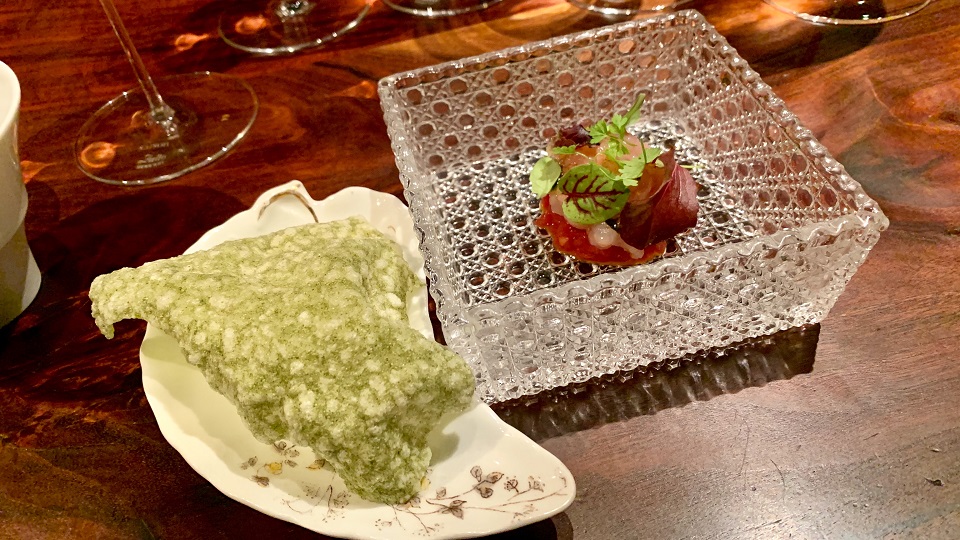 A sensational lobster and lamb ‘crudo’ follows. The interplay of flavors and textures was just dazzling. I often like to serve Champagne in the middle of dinner as a palate freshener, and also to show that Champagne is first, and foremost, a wine. The 2014 Rosé de Saignée Creux d'Enfer from Cédric Bouchard’s Roses de Jeanne is superb. Clean, steely and vibrant, the 2014 sizzles with energy and tension. I absolutely adore this wine. Unfortunately I only get one bottle per year. 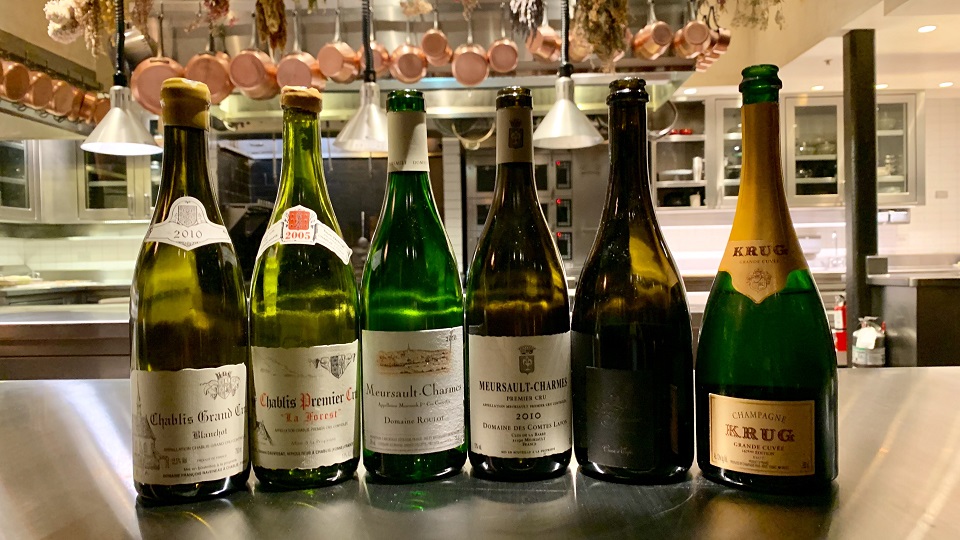 A fabulous range of Champagnes and white Burgundies

The Parker House Rolls, often seen as an accompaniment here, are presented as a separate course. And why not? They merit center stage. Black Cod with its skin and chestnuts marries lightness with richness. Sea Urchin on Grilled Bread, a Saison classic, was brilliant on this night. All three work beautifully with two unique expressions of Nebbiolo. The 1955 Spanna from Vallana is mature and past prime, yet it holds on to just enough freshness to be interesting, which it most certainly is alongside the middle courses in this menu. Ar.Pe.Pe.’s 2002 Valtellina Superiore Sassella Riserva Rocce Rosse is just as compelling as it was a few years ago, when I first tasted it. Moreover, it clearly shows that top-flight Nebbiolo from Valtellina deserves a seat at the table next to the world’s greatest wines. 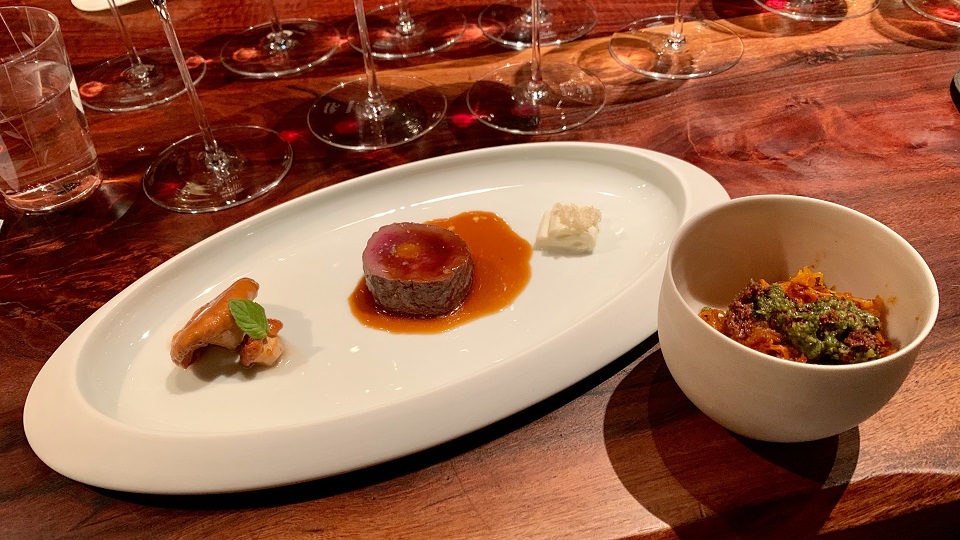 The Venison with Honey Nut squash and chanterelles is a perfect early fall dish that also works beautifully with a flight of 2009s from Domaine de la Romanée-Conti, wines that take us into the stratosphere of pure and total pleasure. The 2009 Grands Échézeaux Grand Cru is not going to win any awards for nuance, but it is explosive, hedonistically satisfying and just tremendously delicious. After all, the first thing a wine should do is deliver pleasure. The 2009 GE certainly does that. Wow. The 2009 Romanée St. Vivant Grand Cru is classic RSV, with beautifully perfumed aromatics to match its gracious, mid-weight personality. Even in 2009, a warm year, the RSV is a Burgundy of sublime polish and enchantment. The 2009 La Tâche Grand Cru is the most ethereal of the three wines in this flight. Whole cluster influence is especially marked here. A whole range of spice, dried flower, mint and savory overtones infuse the 2009 with layers of nuance. Next to the other wines in this flight, La Tâche is ethereal and harder to fully capture with words, an attribute many, if not most, of the world’s greatest wines share. 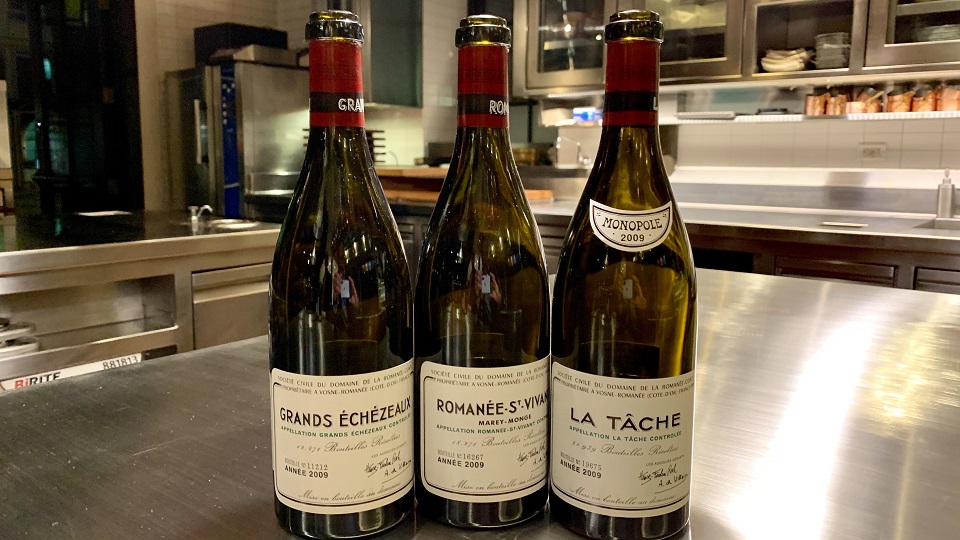 Venison is followed by the Hida Wagyu with Hen of the Woods mushroom. Here, the pairing of the beef and three Barolos was just stellar. A stellar flight of Barolos rounds out the night. Burlotto’s 2013 Barolo Monvigliero is a wine I like to serve at dinners like this one, as I know most people may never taste it, which is a shame. Of course, the 2013 is young, but its profound greatness is evident in the early going, The interplay of aromatics, fruit and structure really brings out the stunning beauty of the Monvigliero cru. The 2013 is simply a phenomenal wine and a towering achievement from Fabio Alessandria. Baldo Cappellano’s 2001 Barolo Pie Franco-Michet takes me back to the days I used to taste with him in that tiny cellar at the base of Serralunga. Surprisingly powerful and deep, the 2001 is frankly even more impressive than I remember it. In a word: superb! Would you believe I had a chance to buy a large parcel of Giovanni Conterno’s 1996 Barolo Riserva Monfortino when it was first released? Well, I did, but I was in business school, full of debt, and although I still bought a financially irresponsible amount of wine, it was not enough. This bottle of the 1996 is simply moving in its beauty. Dense and powerful in the glass, the 1996 possesses enough pedigree to drink well for another 30 years. All the classic Monfortino signatures come through in an epic, deeply moving Barolo that represents another time at Conterno. 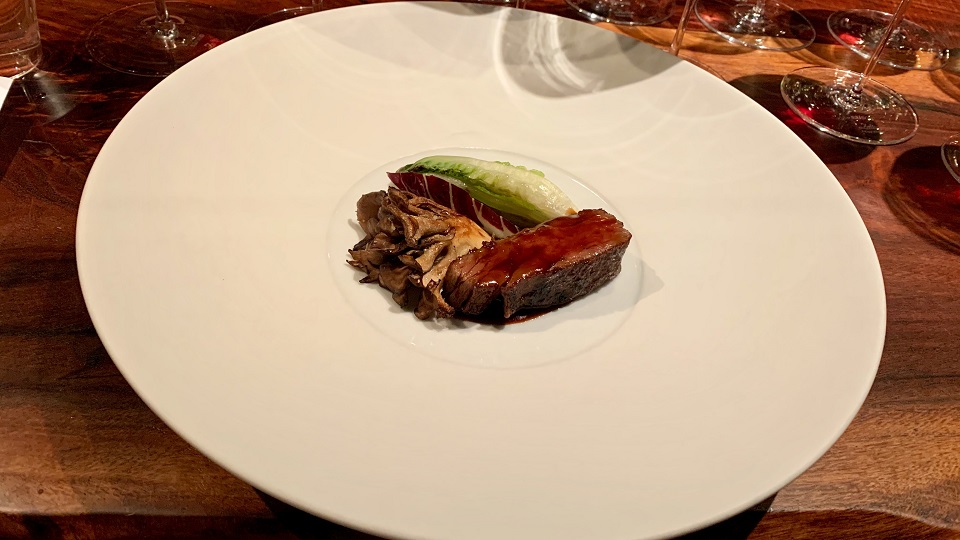 Saison regulars and Vinous readers might wonder about the placement of the Caviar, another Saison classic, so late in the menu, as it is typically the first course of the night. A little while back I complained that the tasting menu at Saison was too repetitive. This is a real problem for very well-known, high-profile restaurants. Many guests come especially for the famous dishes, so not offering them is a risk, and yet, at the same time many want to see something new. So, as dinner moved along, I noticed there was no caviar. At that point, the staff were probably thinking something like “that (insert expletive) guy always complains the menu is the same, and now he wants the caviar? Yes, I did. And Saison’s staff were perceptive to pick that up, so out came the caviar. 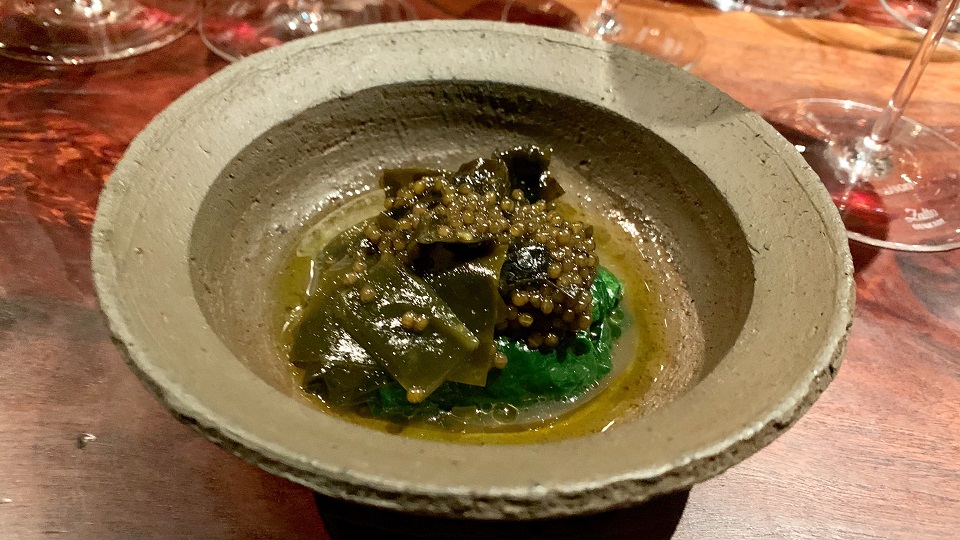 Desserts were good, if a bit simple. That was not much of an issue, as we really wanted to focus on finishing the wines. 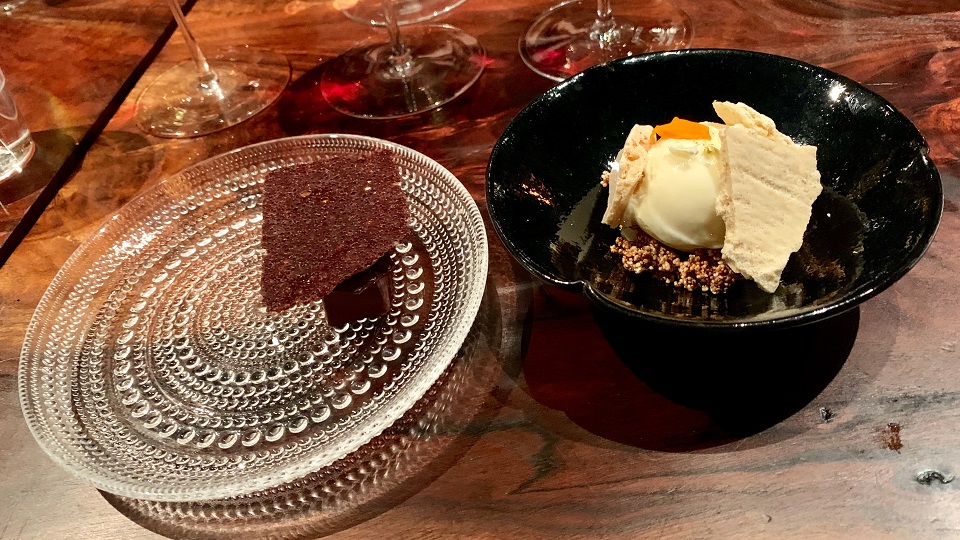 As the evening winds down I check back on a few wines, with a focus on the whites. I often find that white Burgundies need significant aeration to show their best. That is certainly my feeling on this night. It is too hard to pick favorites, but the Comtes Lafon is way, way up there. I also love the 2009 Grands Échézeaux for its hedonistic intensity, the 2014 Creux d'Enfer for its purity and the 1996 Monfortino for its Nebbiolo classicism, although the truth is in this cherry-picked lineup, any of these wines would have made a centerpiece for a fabulous dinner. I would like to thank the entire staff at Saison for their relentless drive towards perfection and our donors for their extraordinary support of La Festa del Barolo.