California Syrah on the Big Stage 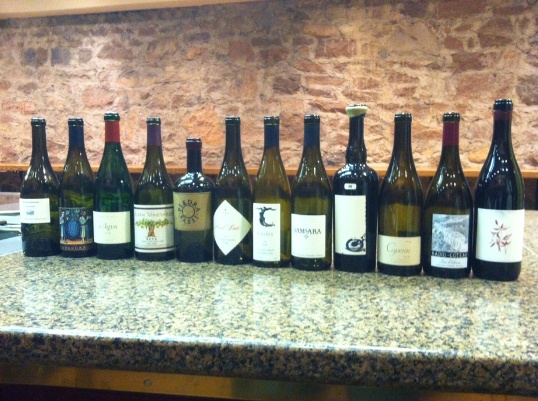 This charity event at the Culinary Institute of America last October was special for so many reasons. First and foremost, the tasting and dinner at Press that followed raised over $110,000 for two very worthwhile causes, students in the CIA’s wine program and a division of The Mount Sinai Hospital that treats children with terminal cancer. As for the wines, well, they were pretty special, too.

The Culinary Institute of America’s EcoLab Theater is a dramatic room. Designed as a classroom for cooking demonstrations, the audience is seated amphitheater-style while the presenters are on the ground floor. At times, it can be daunting to look up at all of those people. I did better this year than last year, when I arrived late for my own event! It must have been my Italian genes. By the time I walked into the room, I had spent over a month and a half in California in 2012 alone. During the ten days leading up to this memorable afternoon I had tasted virtually every major Napa Valley wine, many more than once. So, it would have been understandable if the twelve Syrahs I had chosen for the tasting might have suffered in comparison. Instead, the exact opposite happened. I was completely blown away. One after the other, the wines were just drop-dead gorgeous. As my co-host, Karen MacNeil, and I surveyed the wines, I knew instantly it was going to be a great tasting. And it was.

Because I usually taste within each region in California separately, I don’t often have the occasion to taste one variety across many different appellations. Based on what I heard from the audience, it turns out I am not alone. A number of attendees mentioned how much they enjoyed tasting a wide range of wines from different parts of the state. I felt the same way.

I wanted to challenge the audience, and also take some risks. It isn’t enough to taste a set of great wines, even when it is for charity. There has to be something more than that. Hopefully something that remains. So I decided to toss out the conventional rule of thumb when it comes to putting wines in flights of going from lightest to richest. I wanted to debunk one of the most common urban myths I often run across; the idea that delicate wines are easily overpowered in a group tasting.

We started with three wines from Napa Valley, as I wanted to open with wines that presented a sense of familiarity. Did they ever. The Araujo and Colgin Syrahs had something in common in that they were first and foremost wines of place. In this setting in particular, the 2010 Araujo Syrah really screamed Eisele Vineyard, with warm tobacco, smoke and grilled herb overtones. It was so distinct and pure. Along similar lines, 2009 Colgin’s Syrah from IX Estate on Pritchard Hill, was very much defined by a hillside sense of structure. Both were gorgeous. John Kongsgaard’s 2009 Syrah from Hudson Vineyard, in the southern part of Napa, had a little of both, or better said a lot of both. It was deeply reflective of place, but also incredibly varietally expressive. Dazzling pretty much sums it up. This was a stunning flight.

John Alban’s 2008 Syrah Reva impressed for its power, but came across as very, very young. On this day, the oak was a little more pronounced than in previous tastings, something I also heard from a few attendees. Still, all of the pedigree was there. Sashi Moorman’s 2009 Piedrasassi Syrah Rim Rock was fabulous. Rim Rock is a little-known vineyard in San Luis Obispo planted with Syrah that was grafted onto existing Chardonnay rootstock. The 2009 Rim Rock was firing on all cylinders, with tons of varietal nuance and plenty of explosive fruit. Wines from this site have the ability to deliver intensity with no excess weight. That was certainly the case here. As they so often are, Paul Lato’s 2010 Syrah Il Padrino Bien Nacido Vineyard was pure sophistication, elegance and class. A dash of Viognier and partial use of whole clusters came through in the wine’s striking inner perfume. The audience loved it, and so did I.

To be honest, I had some reservations about including one of Joey Tensley’s wines, as the 2009s were so tannic when I first tasted them. But the wines were fabulous, so I chose the Colson Canyon, from the warmest site Tensley works with, in the hope a few additional months in bottle would help. Thankfully, they did. The 2009 Syrah Colson Canyon was one of the most expressive, beautiful wines of the afternoon. It elicited numerous positive comments. What a great, great showing. Chad Melville’s 2009 Samsara Syrah Melville Vineyard was impressive from the beginning and was equally superb here. Intensely aromatic and fragrant, it was one of the most savory, exotic, layered wines in this tasting. Screamingly beautiful and haunting, the Syrah Melville was breathtaking. It was quite a shift to move to the 2008 Sine Qua Non Syrah The Duel from Manfred and Elaine Krankl. Stunning in its depth, texture and pure beauty, the 2008 was absolutely breathtaking. Stylistically, it was of course one of the more intense, fruit-driven wines of the day. Since then, the 2008 has only become more expressive. Several recent bottles have been fabulous.

Without question Wells Guthrie’s 2009 Copain Syrah Baker Ranch was one of the most talked about wines of the afternoon. How could a wine deliver so much fruit intensity and yet remain so weightless? Well, that is one of the great mysteries of wine. Pinot Noir can do that, and not just in Burgundy. After the tasting, several sommeliers came up to me and told they thought I was crazy to serve the Copain after the Sine Qua Non and the other bigger wines. But I wanted to prove a point. And that is that delicate wines can be appreciated after more intense wines. The idea that concentration and ripeness overpower understatement is nothing more than an urban myth. If and when that happens, those results reflect the preferences of specific tasters, not the inherent qualities of the wines themselves. It took a lot of time for people to wrap their minds around the Copain Baker Ranch. But there appeared to be a consensus. It was a dazzling wine.

The Copain set the stage for our last two Syrahs, both from the Sonoma Coast, a part of California I find immensely intriguing. Here, too, these wines had no problem being served after some of the richer wines. If anything, the freshness and brightness of the flavors left an impression of vitality and energy that carried through the rest of the day. Eric Sussman’s 2010 Radio-Coteau Syrah Las Colinas impressed for its purity and silkiness, both qualities it has shown from the very beginning. The combination of fruit and savory, peppery notes was fabulous. Explosive and beautiful, the 2010 Las Colinas was a total turn-on. Much the same can be said for the 2010 Syrah Griffin's Lair from Arnot-Roberts, a wine that had put on quite a bit of weight since I last tasted it. Here, the aromas and flavors were smoky, earthy and meaty.

In tastings like this, there is often a wine or two that doesn't quite measure up to expectations. On this day, though, all the wines were just fabulous. Frankly, I had a hard time leaving the room. At the end of the afternoon, I could only marvel at the breadth and diversity of the wines we had tasted.

For some reason (or reasons) Syrah has never caught on in a big way with consumers. I have heard a number of explanations for that, many of which were discussed during this tasting. There is no low-price, widely available, high quality Syrah in the market a la Kendall Jackson Chardonnay Vintner’s Reserve that might turn on wider public, I was told. Others ascribed Syrah’s lackluster performance in the market to an incredibly broad range of styles that might be too much for the average consumer to grasp. Fair point. We certainly saw a huge number of unique styles in these twelve wines alone. Some said consumers lack reference points for great Syrahs from France, while the wines of Bordeaux and Burgundy are more familiar. That makes sense, too. But the best California Syrahs need no reference to France, or anywhere else, for that matter. They stand on their own. I also heard that after an initial boom a few years back, Syrah is now overplanted. Not much anyone can do about that, I am afraid, at least not in the near term.

Still, it is impossible to miss the central truth. Syrah is one of the most compelling grapes in California. Leaving aside the handful of famous wines that have reached high prices, the vast majority of California’s Syrahs remain reasonably priced within the context of the world’s great wines. I have no doubt that most, if not all, the bottles in this tasting would sell for two to three times as much if they said ‘Napa Valley Cabernet Sauvignon’ on their labels. Savvy consumers who want to drink the world’s best without spending a fortune will want to take a little time getting to know California’s top Syrahs.