Chicken breast and leg with gnocchi, flat mushroom and a tarragon sauce

Perhaps as a result of my eternal optimism, or maybe just because it’s a phrase I frequently read in the media, I almost described this as the first post-COVID Vinous Table. Alas, the idea that a pandemic has a beginning, middle and end is a chimera. Writing this at the beginning of August 2020, I had the disquieting realization that we are in the opening chapter of an ongoing war, and like any conflict, it will be a drawn-out affair with many casualties, without a full stop, without the ”and they all lived happily ever after” ending we dream about. This is more a war of attrition, chipping away at the invisible enemy. Nevertheless, I remain convinced that life will one day return to some semblance of what is oft described as the “new normal” once the human race is armed with a vaccine and/or an effective treatment, sooner than skeptics might think. In the meantime, the hospitality industry tries to keep its head above water as restaurants fight for survival and even long-established names vanish at a dispiriting rate. 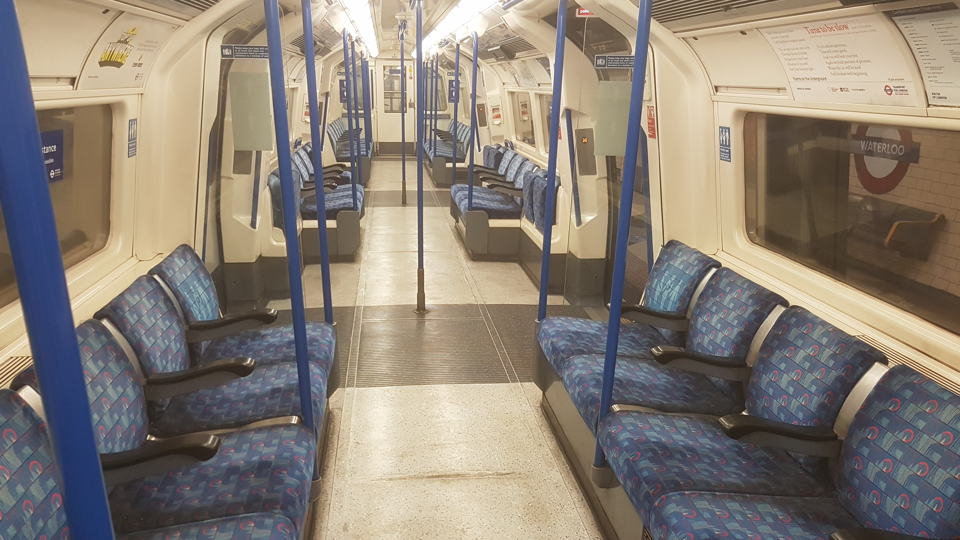 This was the underground carriage on the usually busy Northern Line from Waterloo Station. Not a soul.

Here in the UK, restaurants commenced reopening in early July. They have had to comply with government rules on social distancing, calculating whether that makes them financially viable, and praying that customers will overcome the fear of enclosed spaces that gestated during isolation, take a deep breath and reenter their doors. Judging by those I have spoken with, it seems that restaurants with a loyal customer base can depend on them to support the business through to that elusive “other side.” For those who did not have such a base before the pandemic, things look bleak.

So it came to pass that on July 29, I met two friends for my first dinner at Noizé in central London, a restaurant that I reviewed before on Vinous. We wanted delicious but straightforward cooking; nothing glamorous, no fancy haute cuisine, as such luxurious dining did not seem appropriate. The evening marked my first time back to London since early March. Kitted up with hand sanitizer and enough masks to supply England with PPE until the end of the year, I caught a virtually empty train to Waterloo. That was a blessing in terms of social distancing, though I missed the noise of excited day-trippers, ululating children and loud teenagers chatting inanely on their smartphones. The streets of London were also sparsely populated. Where was the cacophonous music of foreign voices? Everything felt... silent. You could count the number of tourists on one hand. 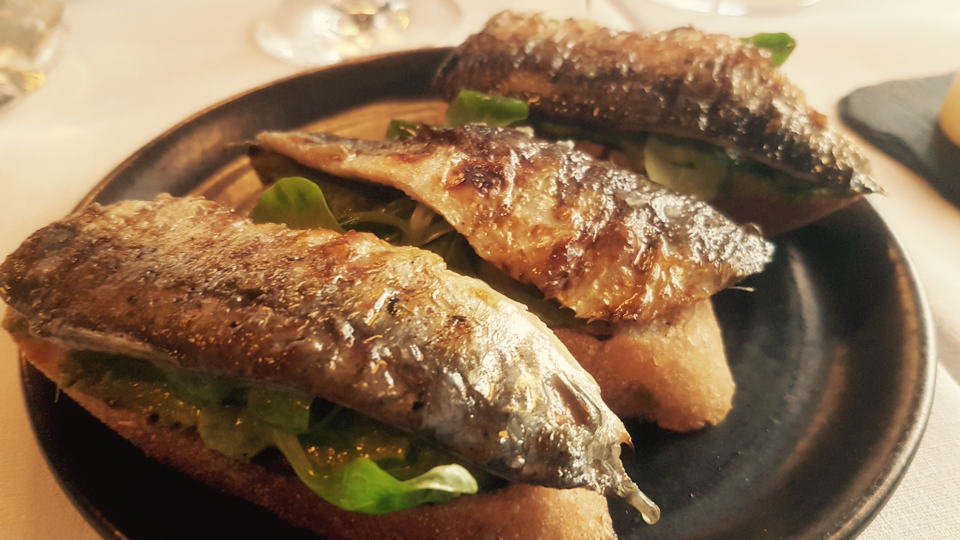 Arriving early after a detour to Soho’s secondhand record shops (which were as busy as ever, since the vinyl-collecting community is apparently immune to coronavirus), I sat at an outside table and met co-proprietor Mathieu Germond. He seemed pleased to see an old face. I inquired how business was faring, and he told me that the first weeks had gone well enough thanks to returning loyal customers, but things had quieted down in recent days, perhaps because people have finally been able to escape London for a vacation. Noizé has not changed, but it has had to adapt. Tables have been removed on the ground floor, and I never felt uncomfortable in terms of social distancing. Noizé has a moderately capacious interior if you include the basement, though there was no need to use it, since only three or four tables were occupied on this Wednesday night. The restaurant had introduced hygiene measures prescribed by the government, though I observed that waitstaff were not attired in facemasks. 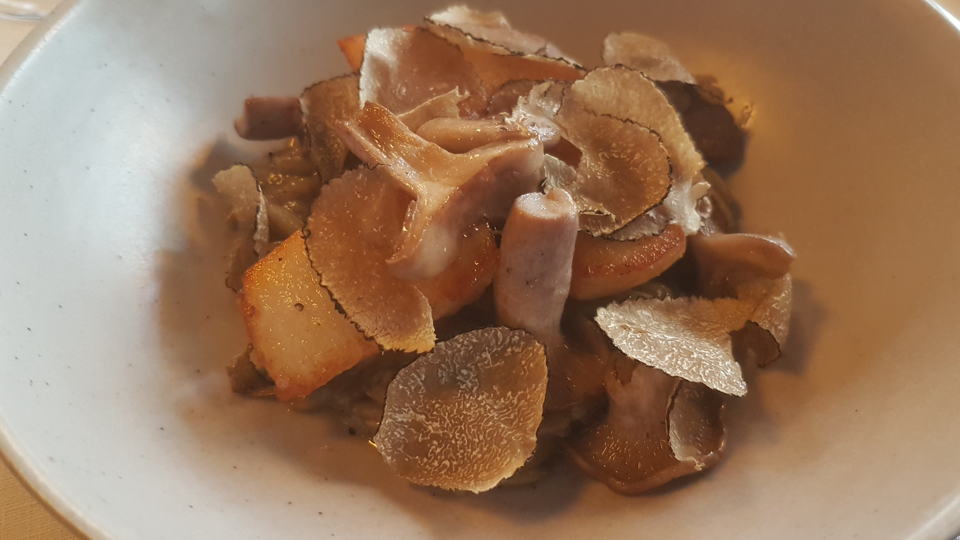 The food was excellent, as expected. I had to resist the Cheddar gougères and opted instead for failsafe sardines on toast. These were perfectly cooked with just enough saline bite, simple but brutally effective, as well as brimming with Omega-3s. The skin had that lovely flaky crunch – just perfect.

To follow, I chose the special: pan-fried scallops with field mushrooms and generous shavings of black truffles. This was a superb dish that reminded me how much I miss dining out. The scallops were perfectly cooked and irresistible in combination with the fungi. The dish could have been heavy and over-seasoned, but it was surprisingly light and allowed the juicy flavor of the scallops to shine. 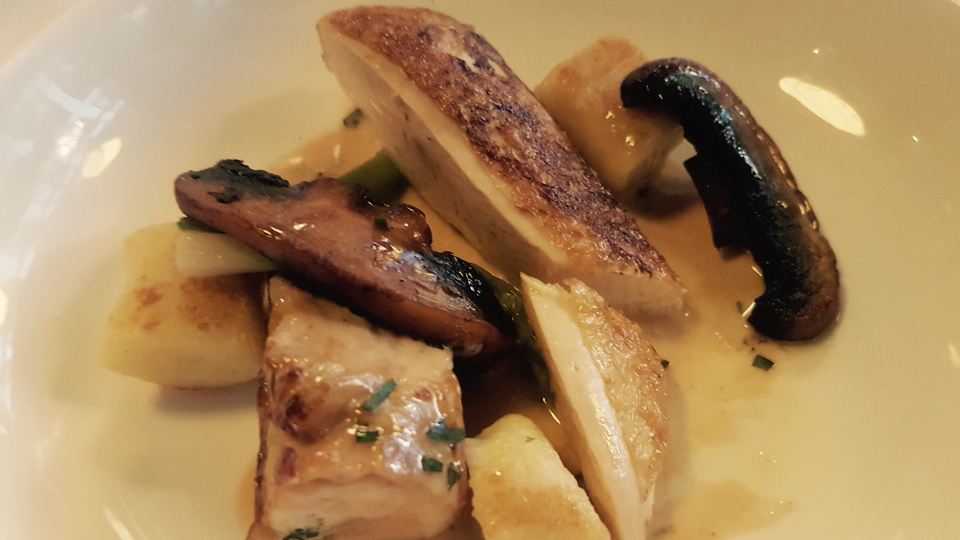 Chicken breast and leg with gnocchi, flat mushroom and a tarragon sauce.

For the main course, I played it safe with chicken breast and leg, partnered with gnocchi and flat mushrooms in a tarragon sauce. It was no master-class of technical wizardry in the kitchen, but rather top-notch French bistro cuisine served with minimal fuss and maximum flavor. I could not resist the apricot tart to finish. This was possibly the standout dish, beautifully prepared, the pastry light as a feather, the fruit bright and fresh without any heaviness. 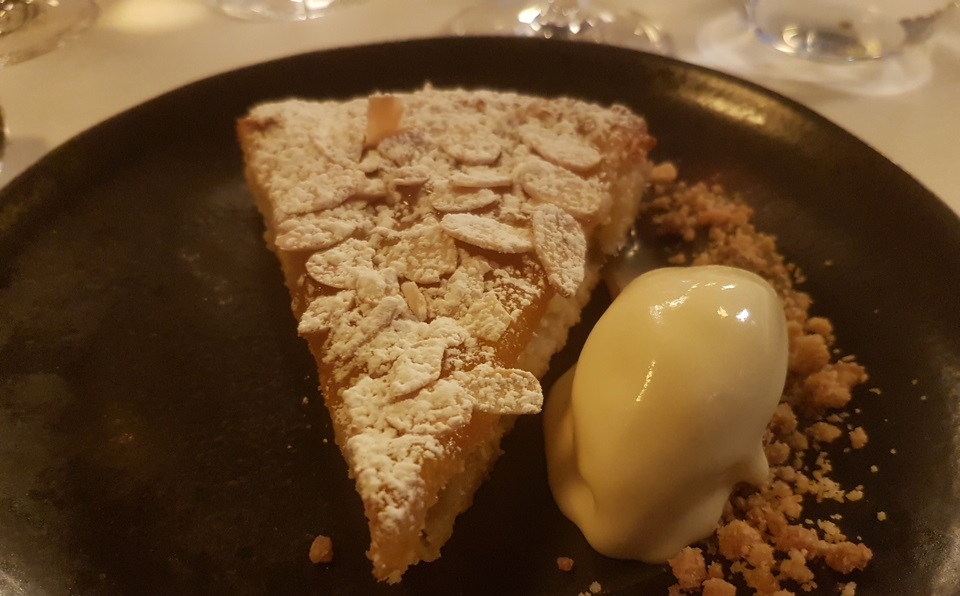 My friends never fail to bring out exceptional bottles, and why not, when we are celebrating a return to dining and, most importantly, friendship?

We started with a sensational 2002 Taittinger Blanc de Blancs Comtes de Champagne. My word, this is exquisite, representing everything I adore in champagne. Limpid gold in hue, it has a compelling bouquet of walnut, smoke, dried honey and shucked oyster shells that I found utterly entrancing. The palate does not disappoint, displaying an irresistible rounded texture and perfectly pitched acidity that cuts through the flavors of lemon curd, orange pith and crushed stone. It was as if this champagne tries to give you everything you desire, and does it with such aplomb that you cannot help but be smitten. I have no doubt that it will cruise at a high altitude for many years. Alas, our eagerly awaited 1988 Meursault Tessons Clos de Mon Plaisir from Domaine Guy Roulot, pre-dating the arrival of his son Jean-Marc, was oxidized on arrival. Some things have not changed.

Having been in the region the previous week, I brought a Chablis. The abundant high yields of 2018 meant that producers had to either send excess fruit to the distillers or keep a barrel or two back for private use. The 2018 Chablis “Prorata” from Domaine Edouard & Eleni Vocoret is a blend of three different vineyards (Les Pargues, Le Bas de Chapelot and Les Butteaux) and will not be commercialized. That’s a shame because it is a fascinating one-off. The distinctive nose of citrus fruit, Japanese yuzu and greengage successfully carries an intriguing, almost dissonant top note of wet clay or pottery. The palate has a zippy saline entry with good depth, displaying touches of limoncello and orange zest. The saline theme continues toward the finish. This wine improved with an hour’s aeration and showcases two of the brightest talents in Chablis. Readers can look forward to my review of their 2018 and 2019 very soon. 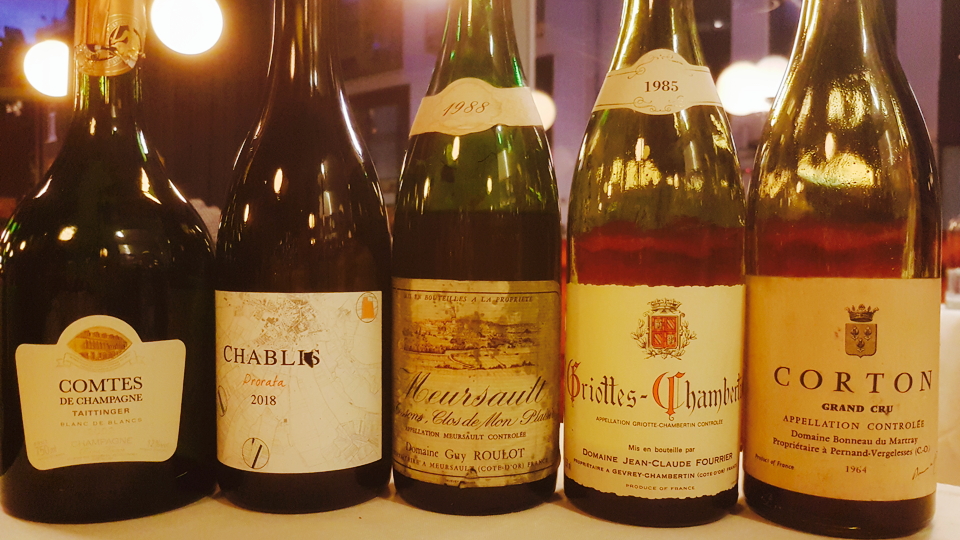 Moving on to our pair of Burgundy reds, we began with the rare 1964 Le Corton Grand Cru from Domaine Bonneau du Martray. It is true that recent vintages of this cuvée have been criticized as rustic and, to use Clive Coates’s vernacular, rather “slight” and not comparable to the Corton-Charlemagne, irrespective of premature oxidation. However, my experience proves that this has not always been the case. A 1971 Le Corton, which will appear in a forthcoming article, was drinking exquisitely last November; ditto this 1964, which was made when René Bonneau du Martray was at the helm. He often sold the production to négociants, which is why vintages from this era are as rare as hens’ teeth. Deep in color with minor turbidity, and a punchy nose offering cranberry, black olive, tobacco, dried blood and seawater scents, this is well defined and still vigorous after 56 years. The palate is medium-bodied with rigid tannins and quite saline in the mouth, revealing a strong marine influence toward the pure, focused finish. You could argue that it never kicks on with aeration and even fades a little, yet it proves that back in the day, Bonneau du Martray crafted Cortons that could really stand the test of time. Finally, there was a 1985 Griotte-Chambertin Grand Cru from Domaine Jean-Claude Fourrier, the father of present winemaker Jean-Marie. This was my second bottle, the first having turned up at a private La Paulée in 2018. It was deep in color with plenty of pastille-like red fruit on the nose, crushed strawberry mingling with cranberry, orange peel and light ferrous scents. The palate was firm and sinewy, grippy and, perhaps like the domaine’s wines of this era, a tad rustic and brutish toward the finish. Yet its backbone has held it up for 35 years, and while I cannot envisage improvement, it will certainly give another decade of drinking pleasure.

So ended my first soirée in London in an altered world still coming to terms with unfolding events. I cannot deny that initially I missed the hubbub, the background clatter and chatter, the warm atmosphere of a packed restaurant that adds to the occasion. While current distancing measures are in place, we must do without the thrill of the crowd. That does not necessarily preclude us from enjoying a meal out, however, and I had a thoroughly pleasant evening in every way, one that meant a lot after months in hibernation. Here in the UK, the government’s “Eat Out to Help Out” campaign, designed to encourage diners back to restaurants in August, means that I’ll be taking advantage of reduced bills, and my contributions to Vinous Table will focus on participating restaurants that offer sound value and great cooking and would be an irretrievable loss were they to disappear. At this moment in time, it’s not for me to encourage readers to check out this or that restaurant because it’s up to each person to decide whether they feel safe enough. What is certain is that in this crucial moment, every customer, every occupied seat, every dish and bottle ordered represents a small lifeline. Lend your support in any way you can, whether it’s picking up a take-out coffee from your local coffee shop or booking a table at your favorite restaurant. The sight of a familiar face will mean as much to them as it will to you.