Rumor has it that in early 1996 if Christian Moueix had known that the property just above his Dominus Estate on the west side of Yountville was available for purchase, he would surely have snapped it up. It turns out the story was not apocryphal. In a perfect case of preparation meeting opportunity, Claude Blankiet got there first. Blankiet, a native Burgundian who was in the textile business in Texas at the time, had been searching for prime vineyard land in the western hills above Yountville for three years. “Then one day our real estate broker told us that he had secured a 24-hour hold for us to look at some land, which was essentially three knolls.  We flew from Texas on a rainy January day in 1996, walked the land, and signed a contract on the spot.”

Blankiet named the property Paradise Hills Vineyard, explaining that Christian Moueix had often told the press that the central avenue of his Napanook vineyard was the gateway to paradise. He and his wife Katherine planted their first vineyard that year to a Cabernet Sauvignon clone that came from Lafite-Rothschild. Blankiet met winemaker Helen Turley and her husband John Wetlaufer in 1997, after having become one of the earliest clients for their Marcassin wines, and together they decided to bring in star viticulturalist David Abreu to plant additional acreage in ’97, ’98 and ’99. 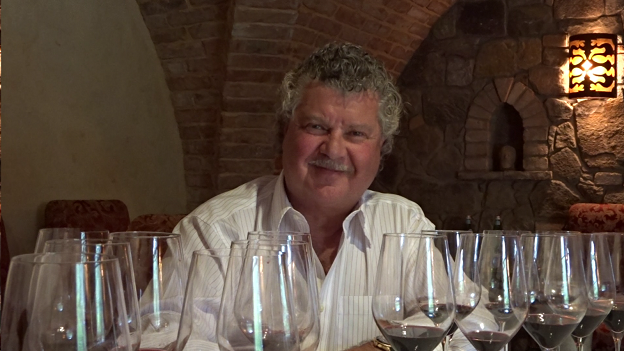 Multimedia: A Conversation With Claude Blankiet

Blankiet’s three hillocks feature different soil types, all of volcanic origin, while the acreage below his winery is alluvial soil from erosion off the mountain. Roughly two-thirds of the vineyard acreage faces east, and most of the rest, including the best block of Cabernet Sauvignon, faces southeast or south.

Blankiet’s maiden 1999 release, made by Turley, was 100% Cabernet Sauvignon from the 1996 planting. The wine was aged in 100% new heavy-toast Taransaud barriques, but by 2003 and 2004 Turley had started mixing in some medium-toast barrels. More recently, Blankiet has reduced the percentage of Taransaud barrels in his flagship Cabernet to about 70%, adding barrels from other coopers like Ermitage, Boutes and Jarnac (located in Cognac). And the percentage of new oak is now typically 90% or 95% and may go lower in the future, especially for Blankiet’s top Merlot-based blend, the Rive Droite. 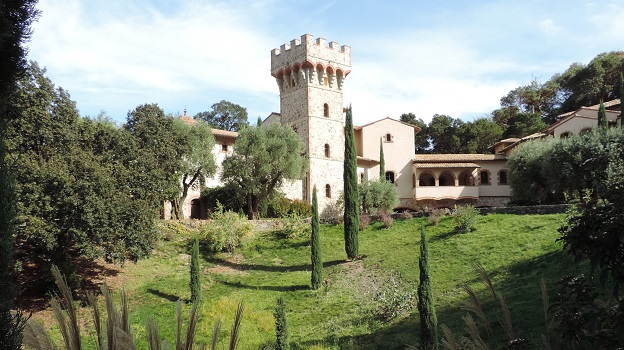 While no new vineyards have been planted since 1999 (there are now 16 acres under vine), some vines have been regrafted—for example, in 2007 a section of Merlot was changed over to Cabernet Franc and Petit Verdot, and in 2012 another block of Merlot was grafted over to Cabernet Sauvignon. “We now have Merlot where it should be,” noted Blankiet, “in cooler spots with more clay in the soil.” Today about 65% of the acreage is Cabernet Sauvignon and 25% is Merlot. The rest is Petit Verdot and Cabernet Franc.

Blankiet has worked with three very talented winemakers since the outset, as well as one world-famous enologist. Helen Turley vinified through 2005, then Martha McClellan, who also serves as winemaker at Sloan Estate, made the 2006 through 2008 vintages, with enologist Michel Rolland serving in an advisory role. The 2009 was made by then-assistant winemaker Max Duimstra and Rolland. Denis Malbec, who also makes the wines for Kapcsándy Family Winery, took over in February of 2010. 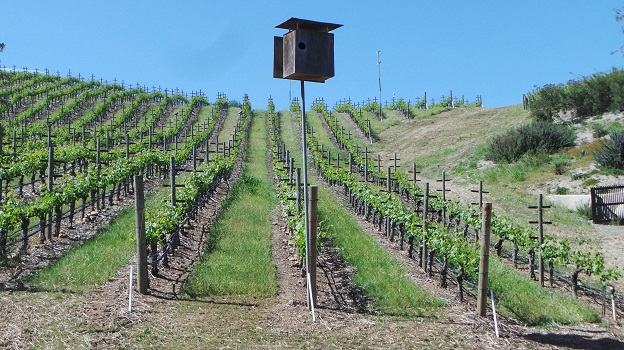 This March I had the privilege of tasting a vertical of Blankiet’s top red wine (100% Cabernet Sauvignon through vintage 2005 and thereafter labeled Proprietary Red to reflect the growing role of Merlot), in the company of Claude and Katherine Blankiet and Denis and May-Britt Malbec. Although it was a consistently spectacular line-up, my favorites were the most recent vintages, which I found to be Blankiet’s most complete wines made to date, showing greater harmony in the early going and nobler tannins than most earlier vintages. (The 2010 was one of the top dozen bottles of California Cabernet I’ve yet tasted.) “We have learned from experience,” noted Claude Blankiet. “It has taken us years and years of trying different things to get the true expression of the site, which was always our goal.”

Vine stress was a problem in some early vintages, as it continues to be for many Napa Valley growers.  Following the loss of a sizable portion of his Cabernet Sauvignon grapes to dehydration in 2003, Blankiet installed misting machines in the vineyards and began to use shade cloth; he credits these improvements with saving the 2004 vintage, which also featured serious heat spikes at the end of August and again in early September. 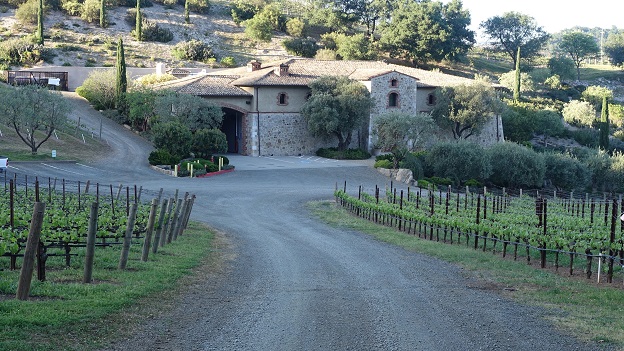 The winery, as seen coming down from the castle

But in more recent vintages, he has made little use of the misting machines, due in large part to improvements in grape-growing. Denis Malbec has overseen significant changes in the vineyards, beginning with a new philosophy on managing the leaves. For starters, today more leaves are left above the clusters to protect the fruit against hot direct sun. “Now we can wait longer to pick,” noted Malbec, “and we don’t necessarily get more sugar in the grapes because they are not dehydrating.” The profile of the vines is different today: “Previously there were fewer clusters and leaves, but the grapes were very exposed to the sun.” Thus the misting machines have virtually been retired, and the use of shade cloth is normally limited to a handful of rows that are particularly exposed.

Malbec is also more meticulous today when it comes to irrigation. While he does not use more total water than previously, he waters more frequently, in smaller doses, to prevent stress that would interfere with the ripening of the tannins. Malbec also extracts earlier in the vinification, before much of the sugar has been transformed to alcohol, so as to avoid getting harsh tannins. His goal is to make wines with “acidity, energy, minerality and soft tannins.” He typically adds some Petit Verdot at the end of the blending process, to bring a bit more focus to the wine, as well as to add “a touch of graphite minerality, and notes of iron, blood and iodine.” Not surprisingly, the wines from recent vintages have shown slightly lower alcohol levels and slightly higher acidity than the earlier bottlings. 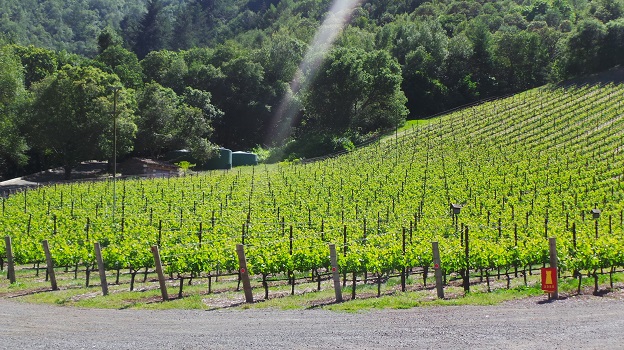 A glorious spring afternoon at the estate

Malbec does a cuvaison lasting 5 or 6 weeks, including 4 to 7 days of pre-fermentation cold soak and 10 to 20 days of post-fermentation maceration. The wines are racked as needed, and Malbec does a lot of stirring of the fine lees. Bottling takes place in late August or September. 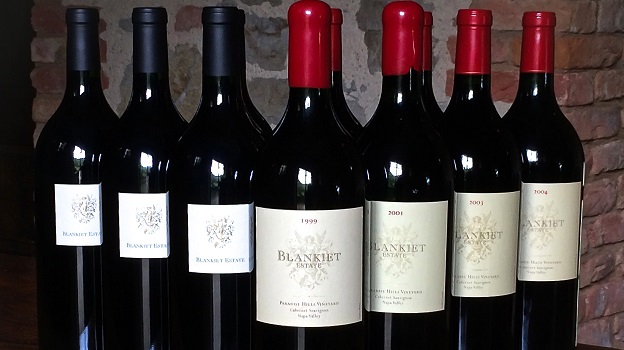 A stunning collection of magnums

In contrast to the other vertical tastings I was part of in March, at Blankiet I tasted all of the wines in magnums, as Claude Blankiet was out of stock on a few of the early vintages and did not trust his 1999 bottles, which had spent time in his cellar in Texas. Certainly the magnums I tasted were all full of life, but I should emphasize that the recommended drinking windows I have provided in my tasting notes are for these magnums, which age significantly more slowly than regular 750-milliliter bottles.

See all the wines (in chronological order)