Meet the Mahers: Two Premier Grape Growers in One Household

Although winemakers get most of the attention in Napa Valley, vineyard managers are increasingly growing in stature. Career options are surprisingly similar: one can either commit fully to a single estate, or function more as a consultant and oversee several properties at once. Kelly and Mary Maher, two of Napa’s top vineyard managers who also happen to be married, came up in the industry together but ultimately took different forks in that path. Kelly founded his own company, Kelly Maher Viticultural Services, and currently manages 14 properties in Napa and one in Mexico. Mary, by contrast, has worked exclusively for Bill Harlan and his many projects since 2001. Taken together, the Mahers are directly responsible for the care of a significant number of Napa’s top vineyards, and though each offers their own particular skill set and areas of expertise, both are renowned within Napa Valley for the exceptional quality of their work. 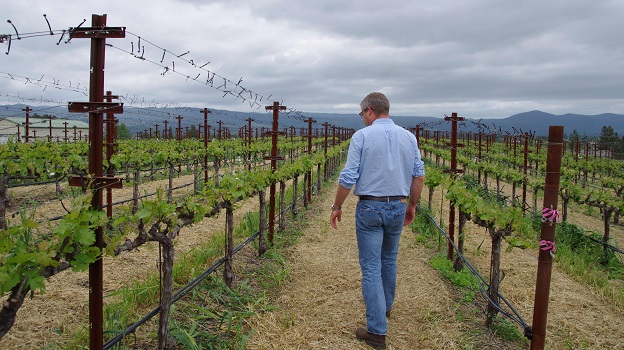 Kelly Maher was born in Connecticut, the son of a Heublein executive. Heublein had long been a major player in the spirits industry, but in the late 1960s it jumped headlong into the wine business through the acquisition of United Vintners (which had recently purchased Inglenook) as well as Beaulieu Vineyard. Following this massive investment, many key personnel were moved from Connecticut out to Napa Valley. This list famously includes Andy Beckstoffer as well as Kelly’s father- Dick Maher- who brought his family west in 1975. Kelly was five years old at the time, and spent the next several years playing among the valley’s many vines. He was not to linger long, however, as his father’s career kept them on the move. Over the course of several decades, Dick Maher served as President of Beringer, Seagrams, Heublein, and ultimately Christian Brothers. By the time he was ready to strike out on his own, Kelly had attended five different high schools, the final year of which was spent back in Napa, at St. Helena High.

He briefly entertained the notion of becoming an architect, but didn’t get far into his studies before realizing he needed to work with his hands, ideally outdoors. Towards this end, he took some time off from school and returned to Napa, securing a job at Charles Shaw under the watchful eyes of Ric Forman, Scott McLeod, and Reg Oliver. The work was primarily in the cellar, but the short amount of time he was able to spend in the vineyards was sufficient to sway him in that direction. 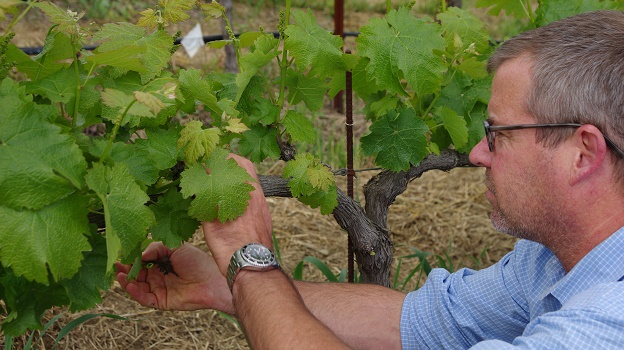 Following stints at the University of California at Fresno and Davis, Kelly graduated in 1992 in the midst of an economic crash. He sent out 80 cover letters before receiving an offer from Clos du Val, where he was appointed the director of vineyard and nursery operations. Kelly remained for 4-5 years, working alongside the widely admired Bernard Portet. “I liked working under Bernard,” Kelly says. “It was  different working for the French. They were really into giving me a lot of responsibility, which was great.” For his next move, Kelly spent five years at  Domaine Chandon, where he directly managed 1,600 acres of vineyards across Napa and Sonoma in addition to contracting over 10,000 tons of fruit annually. “Domaine Chandon took five different vineyard jobs and gave them all to me. By the time I left I essentially had the job of nine people,” he pauses to laugh, “that’s called a French promotion!”

In preparation for the millennium, Chandon made far too much sparkling wine, and the strain of the surplus forced Kelly to lay off several of his workers. Seeing this as a cue for change, Kelly tested the consultancy waters, stepping back a bit from Chandon and adding Etude to his roster. After only a year, however, he found himself at another crossroads, when his contract with Chandon ended simultaneously to Etude selling to Beringer. Suddenly committed to life as a consultant, Kelly drew on his professional contacts and childhood connections, and quickly assembled an impressive list of clients. 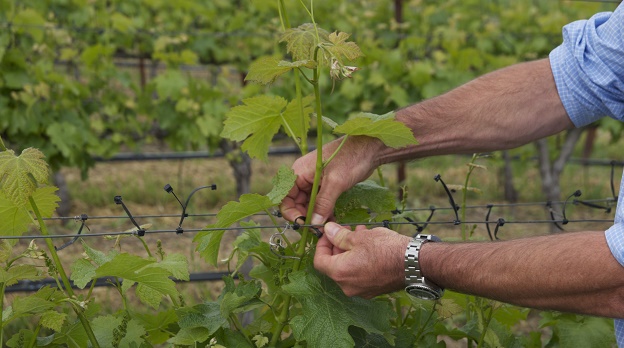 It has now been 15 years of self-employment for Kelly, and he has retained the majority of his clients for all or most of that time. His working relationship with the Moulds Vineyard – most famous as a vineyard designated wine from the Behrens Family – began in 2002. Stony Hill, Hourglass and Forman also hired him in 2002. Duckhorn, Larkmead, and, most recently, Dunn, followed.

What is the secret to the longevity of his relationships – especially in fickle Napa Valley where consultants change jobs like pairs of socks? Putting the person ahead of the project. “Personality is 99% of it,” Kelly tells me, “I’m friends with most of my clients. But beyond that, I like to work with open-minded people who are willing to spend the time and money to get things right. The ego-centric person who doesn’t drink wine but wants 100 points is not my first choice as a client. And there’s a good amount of that around here.” Of course, managing one’s friends is not always an easy task, especially when they’ve been around for longer than you have. “Guys like Mike Chelini (of Stony Hill) and Ric Forman like working with me because I’m always honest with them and I’m not afraid to speak my mind. That said, they have a lot of knowledge of their own, so they can be a bit difficult to steer. If I want them to do three things, I have to give them a list of ten.” 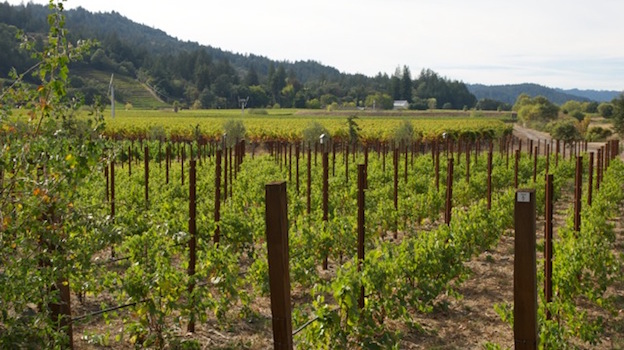 The vineyard at Larkmead

Interestingly, though Kelly prefers clients who aren’t afraid to spend, a given project’s economic viability is extremely important to him. “I like the challenge of a budget. It makes you more intelligent in your path toward quality.” For him, the ideal farmer considers economic as well as ecologic sustainability – another of his specialties, along with soil nutrition and vineyard design.

But while financial restrictions can be stimulating to Kelly, they barely register on his wife’s radar. Mary Maher, an equally accomplished vineyard manager, works exclusively for Bill Harlan, a man notorious for spending whatever it takes in the pursuit of the highest quality.

Mary’s path toward Harlan was indirect. She grew up in the Sacramento Valley – one of California’s key agricultural centers – the descendant of cattle farmers. Like many of their generation, her parents were cocktail drinkers, so wine was decidedly not a part of Mary’s upbringing. She settled on agriculture early in her studies, majoring in plant sciences and pomology – the study of stone fruits – at Chico State. After graduation, she moved to the Bay area but was unsuccessful finding a job in horticulture. Aware of her extensive chemistry background, a friend casually suggested she look for a job in the wine industry, and soon Mary was moving to San Jose to accept a position at J. Lohr. Though the work was mostly contained within the cellar and lab, her grape sampling forays showed her a glimmer of a future in the vineyards. 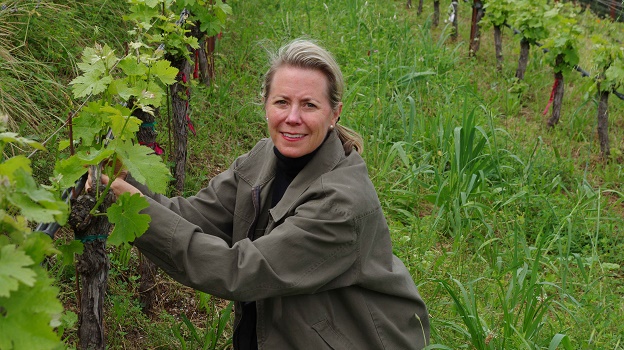 Mary Maher among the vines of Harlan Estate

Armed with this fresh inspiration, Mary applied for a variety of vineyard manager positions, but lacked the experience to command such a title. Seeking a backdoor, she deliberately sought cellar work only at wineries that controlled significant vineyard land, in hopes of eventually talking her way into the field. This is precisely how she ended up at Buena Vista, who owned over 1,000 acres of vines in Carneros. Mary worked there from 1985 to 1995, and was able to transition out into the vineyards after only a single year in the cellar. At the same time, she commuted to U.C. Davis for coursework in viticulture.

Mary looks back on this period with great fondness, “I was learning so much. I worked with a dozen different varieties, both old vines and new. I absolutely fell in love with the field work, the land, the crews.” But Buena Vista’s wines sold mostly at a value price point, and after 10 years of serious budget balancing, she was ready to move in a more premium direction. Leaving Buena Vista, she too formed a consultancy. For several years she worked very closely with Tony Soter, whom she credits as a major personal inspiration, and also advised on the farming at Saintsbury, Domaine Carneros, and Acacia, where she helped to develop their vineyards. 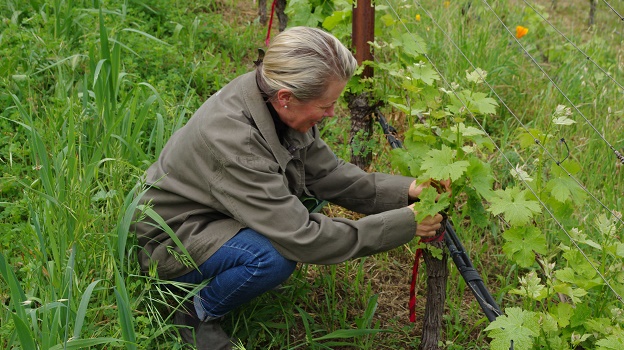 During this time, Mary was contracted to perform due diligence on the site that would become Harlan’s Napa Valley Reserve in 1997. Three years later, Harlan called Mary back. He had finally pulled the trigger on the land and was hoping to hire her to help develop it. She hesitated only briefly – her primary interest was in working with Pinot Noir, not Cabernet Sauvignon – but the timing couldn’t have been better, as Etude had just been sold, and Acacia was undergoing a similar transition. In 2001, she joined the Harlan team full time.

In the 15 years since, the scope of Harlan’s operation has grown significantly, from the establishment of the Reserve to the slow expansion of BOND, as well as the recent launch of Promontory. In the beginning, Mary worked alongside David Abreu’s crew, who managed Harlan’s vineyards for a number of years, but in 2008 Harlan took farming in-house. For many years, Mary oversaw all of Harlan’s various projects, but these days she focuses her attention on Harlan Estate and Promontory.

One of Mary’s primary contributions at Harlan has been transitioning farming towards organic methods, a conversion that has accelerated since she took the farming over completely in 2008. She has also spearheaded a move toward dry-farming; irrigation company-wide is down significantly, and several sites now require no water whatsoever. Of course, as dynamic and forward-thinking an organization as Harlan is, nothing happens without slow and careful measurement, and improved quality in the resulting wine is the ultimate goal. Happily, the winemaking team is thrilled with Mary’s measures, “Cory [Empting] says that the change to dry-farming has resulted in brighter fruit and fresher natural acidity in the wines.” 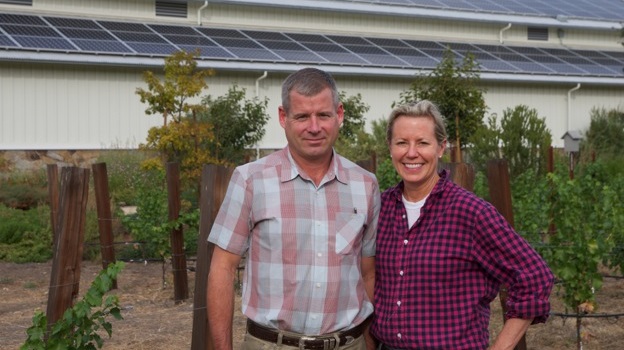 It’s clear when talking to Kelly and Mary that they have a deep professional respect for one another; this is likely due to the fact that they were colleagues and friends for many years before getting married. They first met in the late 1990s when Etude – Mary’s employer – started purchasing fruit from Domaine Chandon. She and Kelly worked side by side on Etude’s blocks and hit it off immediately. “We were just friends for years and years,” Mary explained, laughing, “I even tried to set him up on dates a few times!”

Something changed between them in 2004, however; after a day spent fly-fishing with Lee Hudson, they went out to a movie and suddenly saw each other in a different light. Three years later they were married. I asked them if they often talked shop at home. “Not really,” Kelly led. “We sometimes bounce ideas off each other, but when I get home from work I want to watch the Giants game, not talk about my day.” “We try to keep work out of our home,” Mary explained, “our home life is pretty much centered around baseball, fishing, dogs, scrabble, and books.” The possible exception to this rule might be their massive garden, which includes a sizeable pepper patch as well as 32-tree fruit orchard. “Kelly does most of the pruning there,” said Mary, “though I help occasionally.” She pauses, then adds with a smile, “Pruning the orchard… yeah, that can get dangerous. We sometimes fight about that. We can really get into it over pruning.”