Where would Britain’s fine dining scene be without the Roux family? Would our Sceptred Isle be dappled with so many Michelin-starred restaurants along its length and breadth? I doubt it. In an enlightening interview in Noble Rot back in 2017, Albert Roux recalls arriving on a train at Victoria Station to what he described as a “gastronomy desert”. And it was. Together with his brother Michel they established La Gavroche in Mayfair in 1967, which welcomed everyone from Chaplin to Chagall, The Beatles to the Rolling Stones. Five years later, they bought a rundown boozer in the nondescript town of Bray, a 30-minute drive outside London overlooking the Thames. The Waterside Inn became the first recipient of a star in 1974 and added another in 1977, then a third star in 1985. It has retained those stars ever since and become the UK’s longest-serving three-starred restaurant.

The business was divided between the brothers, Michel Roux Senior taking charge at Waterside and Albert at the helm of La Gavroche, subsequently passing them on to their sons, Michel Roux Junior and Alain Roux respectively. Michel Senior passed away in 2020 after a glittering career, though Alain had already been at the helm since 2002.

I have to confess that having lunched at The Waterside Inn a couple of times over the years, I departed rather…nonplussed. These were preorganized lunches with a large party from the wine trade, and though thoroughly enjoyable, I could not understand what made the cooking special or why it deserved its status. Therefore, I bided my time and waited the opportunity to dine there as a regular patron, which finally arose in June when a good friend from the Far East booked a table and guess what. It turned out to be potentially my favourite dinner this year. 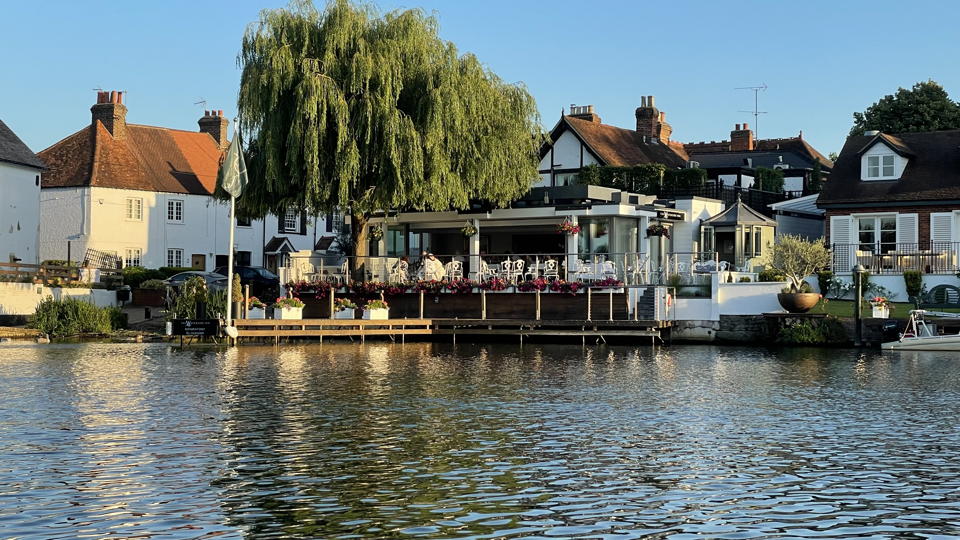 I took this shot as we returned to the restaurant after our river jaunt.

There are a number of reasons. Firstly, we picked a glorious evening. Close to the summer equinox, the setting of The Waterside Inn was idyllic. Bray is a picturesque village that boasts not one but two three-starred restaurants, The Fat Duck just round the corner. It lies far from the hustle and bustle of London, so tranquil and calm, located down a tiny street that ends with a slipway down to the river, currently obstructed by a huge swans’ nest. Its rear garden backs straight onto a willow-flanked bank, rowing teams gliding by every other minute. A motorboat is moored at a private jetty, guests at liberty to take a half-hour jaunt downstream to wave at picnickers and gawp at salubrious riverside mansions. On this evening, the entire rear of The Waterside Inn was opened up to create an open air feeling and enhance the relaxed ambiance impossible to create in an urban setting. 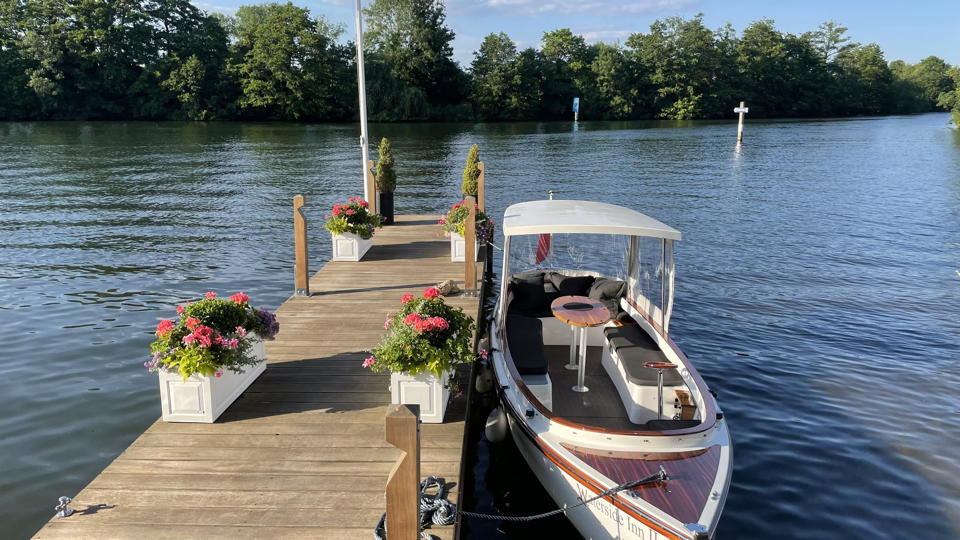 The motorboat is moored at a private jetty.

The cuisine was in a different league to my previous experiences. Alain Roux’s take on French cuisine is exquisite from start to finish - kudos to Belgian head chef, Fabrice Uhryn who oversees a team of 25 chefs. We warmed up with a couple of amuses-bouches, my favourite, tartlets of peeled courgette and yellow peppers. 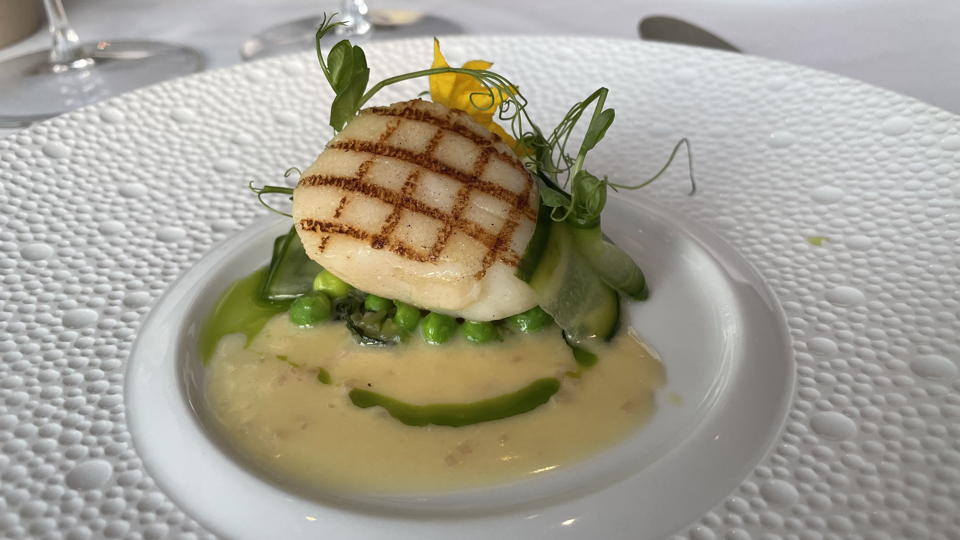 The first entrée consisted of lightly-grilled Orkney scallops with minted pears and beurre blanc sauce. Perfection. The scallop was perfectly cooked and married beautifully with the peas and beurre blanc that had a tempered richness so that it did not overwhelm the nuanced flavours of the scallop. Delicately adorned with flowers and pea shoots, this was the perfect summer starter. 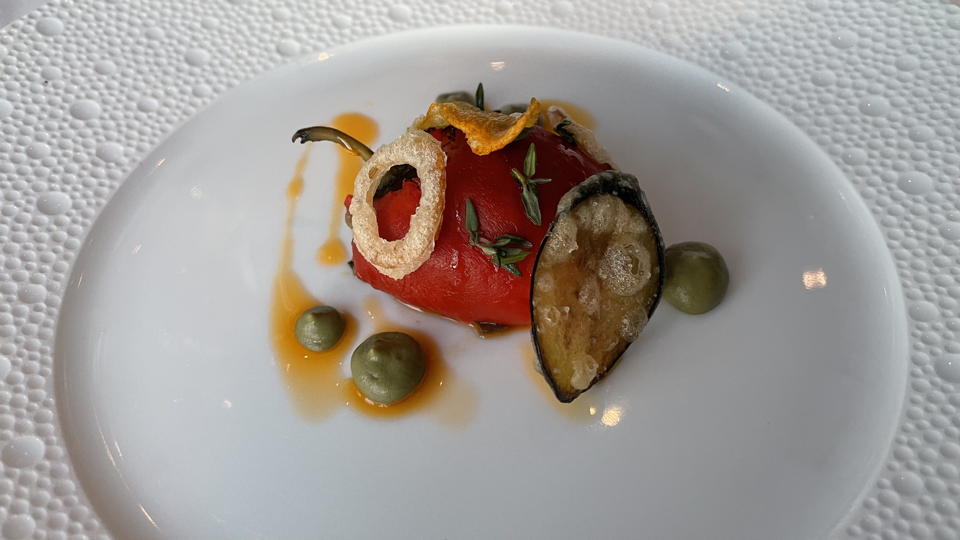 The baby red pepper filled with courgette, caper puree and paprika oil kept the standard high, the tangy puree offsetting the delicately-flavoured pepper, the grilled courgette lending texture and the paprika a welcome pinch of heat. 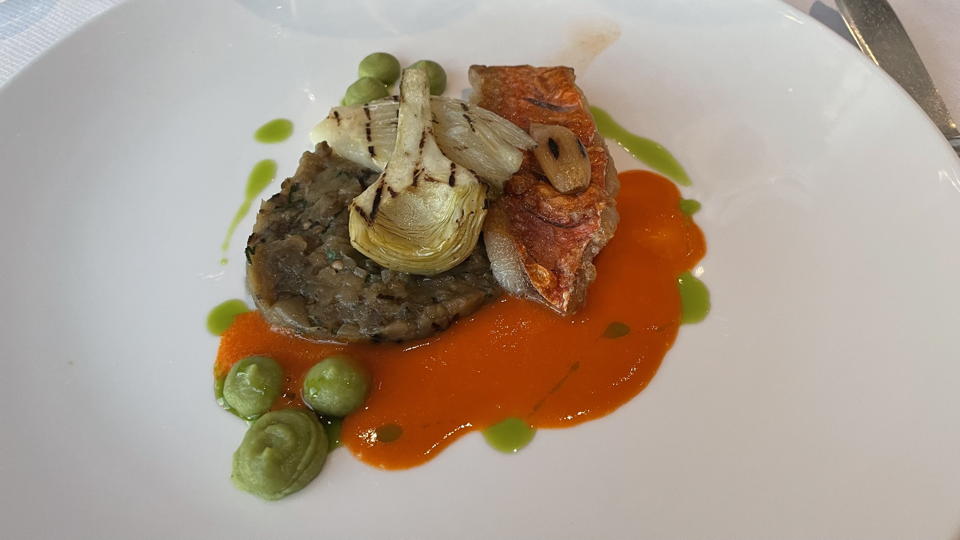 The pan-fried red mullet on aubergine caviar, grilled miniature artichokes and reduced jus flavoured with sweet piquillo peppers was the standout for me. The ingredients were in absolute harmony and the crisp texture of the fish was textbook. Its simplicity belies the detail of this dish, how the heat of the piquillo peppers was exactly measured so that it complemented the mullet. 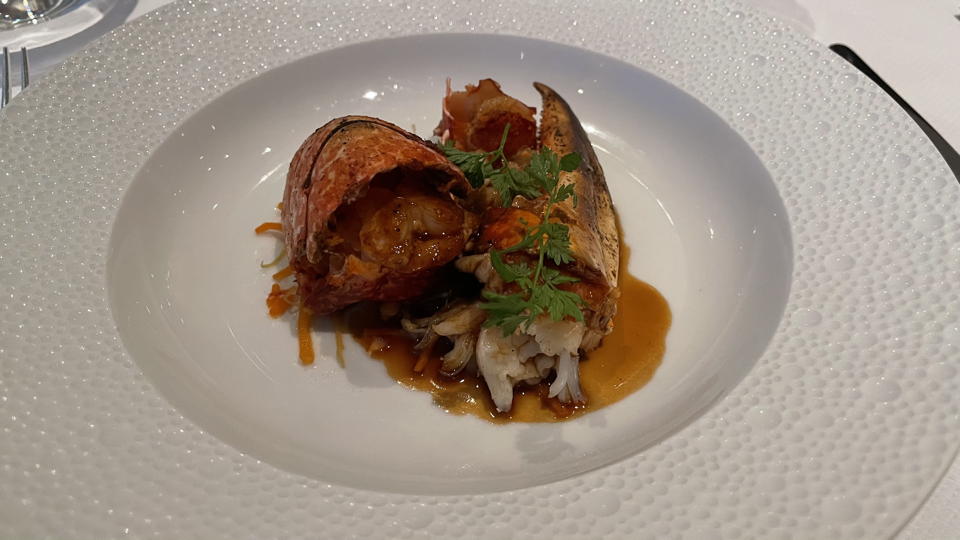 I passed on the foie gras for dietary reasons and looked on enviously. But my substitute was wonderful. The pan-fried lobster medallions and ginger flavoured vegetable julienne with a white port sauce was heavier than previous courses, which I felt I deserved since hitherto the dishes had been lighter. I am not an ardent lobster fan, but the meat was succulent and perfectly seasoned, the white port sauce not overly reduced.

The main course comprised of chopped veal, served with a caramelized shallot tart tatin with sautéed girolle mushrooms and savoury-scented jus. Stunning. The meat was so tender that it had a melt-in-your-mouth consistency, so good that it needed the accoutrements to play supporting roles, which the tarte tatin did with aplomb. 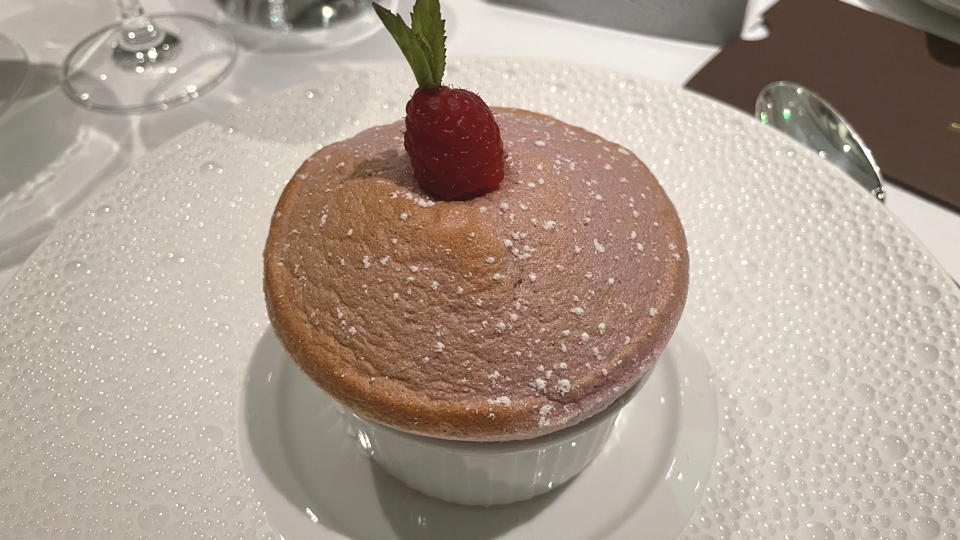 The soufflé is legendary; this warm raspberry iteration was light, subtly-flavoured and could bring a grown man to tears. I wanted to elope with it on the motorboat outside. Maybe someone has tried to do that in the past? Petits-fours completed the evening, by which time my taxi had already been waiting outside for 20 minutes.

Our host has been certified as Hong Kong’s most avid oenophile and had prearranged some very special bottles from the extensive list. As you can probably guess, the list leans towards classic regions, though I was pleased to see good representation from the New World. Prices are not inexpensive, then again, take your time and you will find that their policy of cellaring bottles for long-term consumption means that market prices have leapt ahead. As a consequence, though these bottles were undeniably expensive, they would cost far more if I went out and bought them on the current secondary market. I must complement head sommelier Michael Trenga, who is clearly knowledgeable and amiable. Whereas some sommeliers occupying these lofty positions can come across rather snobby and pretentious, Trenga was chatty and relaxed, a guiding hand rather than someone imposing their tastes. 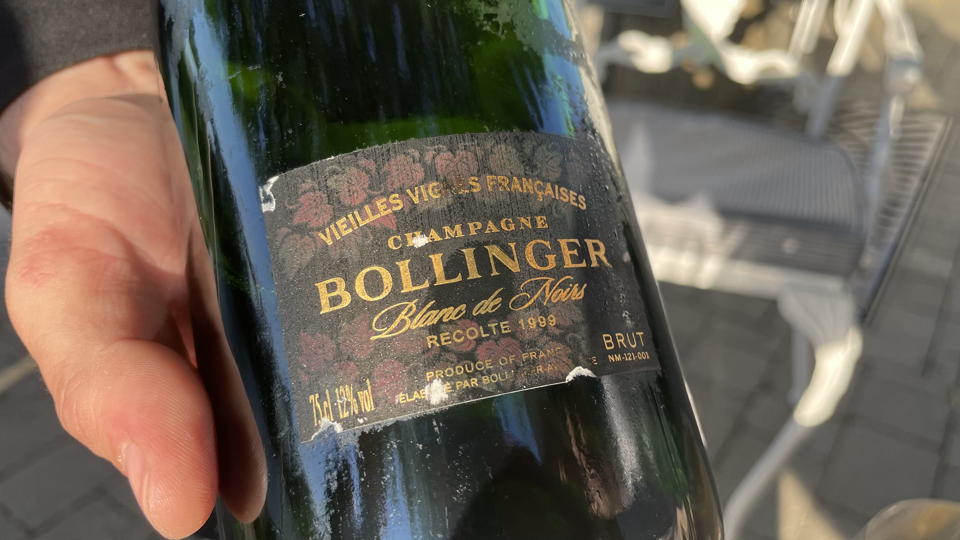 We began with the 1999 Vieilles Vignes Française from Bollinger, disgorged in July 2008. It was an interesting opener. I must confess that I found this bottle more oxidative than I expected. Grilled walnut, pressed flowers and ginger spring up on the nose, the palate is intense with a fine bead of acidity. That oxidative element is quite powerful, and I find it rather distracting, especially compared to the purity expressed by the 2000 that blew me away a couple of years earlier. I wonder if there are better bottles out there? 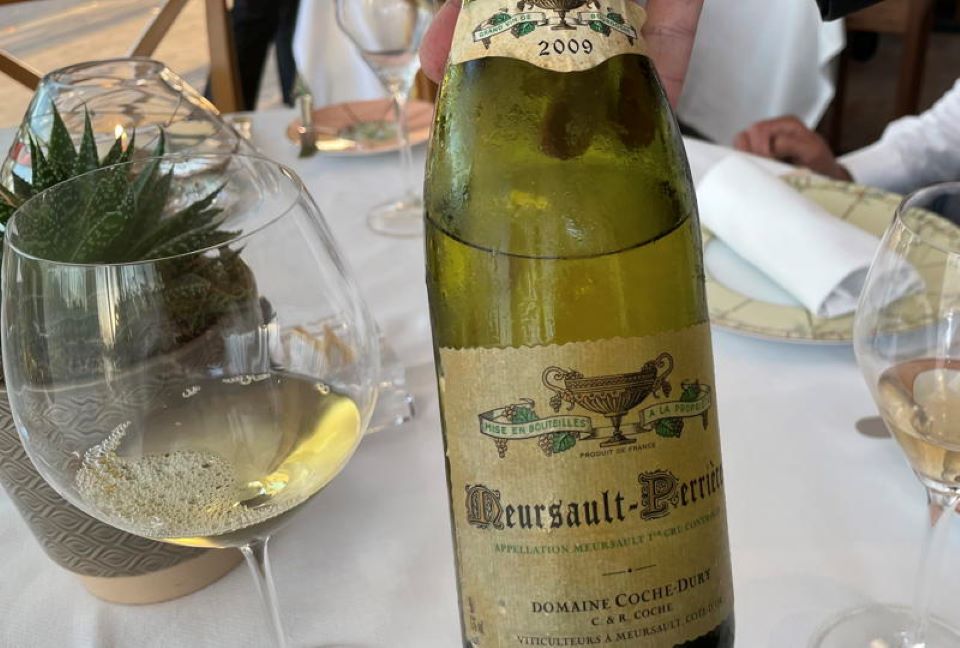 There were no reservations about the stellar white. The 2009 Meursault Les Perrières 1er Cru from Domaine Jean-François Coche-Dury is riveting from start to finish. Laser-like precision on the killer nose, it threatens to overwhelm the olfactory senses. Struck flint, citrus peel and linden, it gains intensity with aeration without ever losing an ounce of its breath-taking delineation. The palate followed suit with ethereal balance, perfect acidity, astonishing energy and a mineral-rich finish that leaves you lost for words. After 13-years, this Meursault is at its peak, though I cannot foresee any decline in the near future. Such is the magic of Coche-Dury. 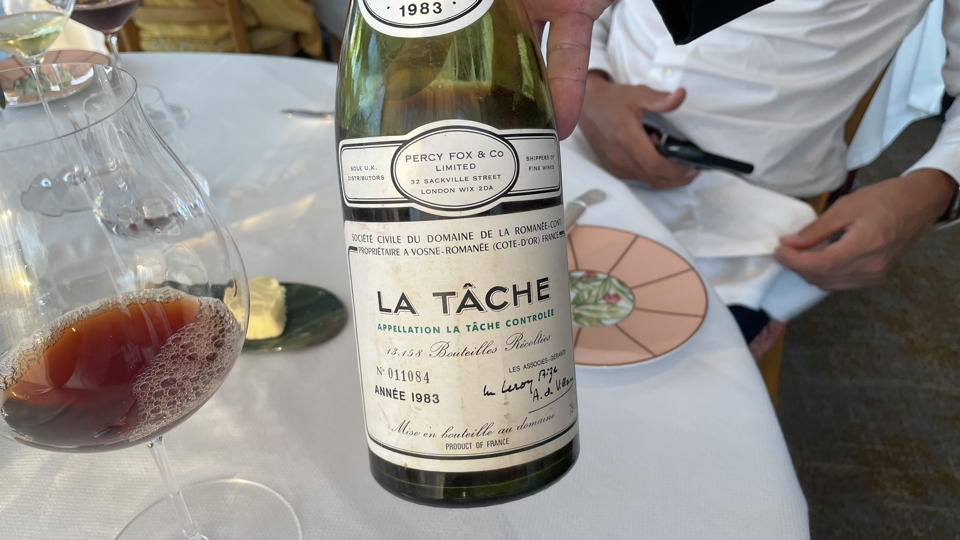 The 1983 La Tâche Grand Cru from Domaine de la Romanée-Conti is a vintage that to my knowledge, I have never encountered before. The growing season does not boast a top reputation, with many growers suffering rain-induced rot. It split commentators upon release and does to this day. This bottle contradicts some dismissive reviews that I have read elsewhere. Melted red plum, burning embers, hints of dried blood and black truffle unfold on the nose that develops more floral nuances with aeration. The palate is gentle and refined, well-balanced with pliant tannins, pretty red fruit with subtle sous-bois notes percolating up with time. Maybe it’s damning with faint praise but the sheer drinkability of this La Tâche resulted in the bottle being finished far quicker than intended. Isn’t that what wine is for? 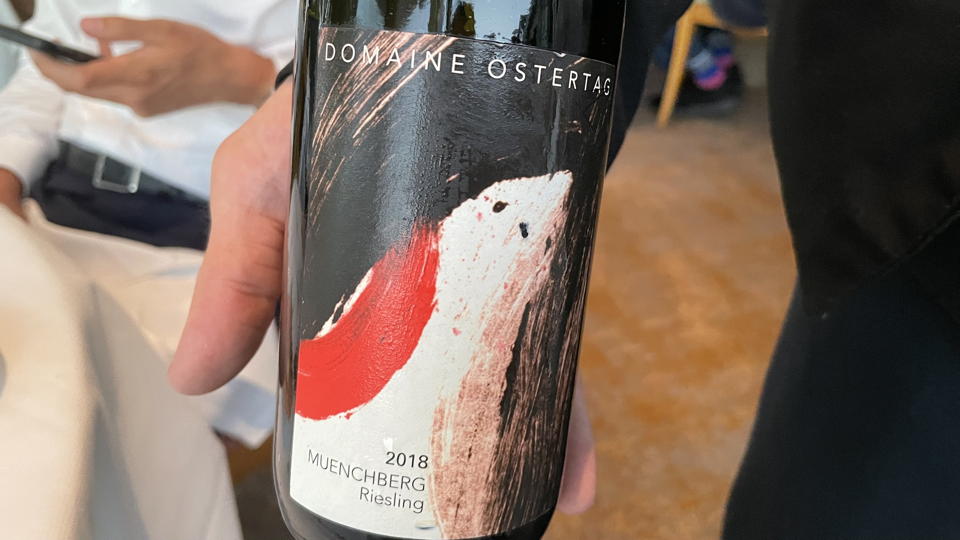 So we ordered a few more bottles from the list. We ventured to the volcanic soils of Alsace courtesy of the 2018 Riesling Muenchberg Grand Cru from Domaine Ostertag. Yellow plum, pawpaw and light white peach notes burst from the glass with wonderful definition. The palate has a slight viscosity on the entry, a fine bead of mineralité underlying the concentrated, tropical-tinged finish that lingers long in the mouth. Probably too young, I would afford it another three or four years in bottle. We finished with 2003 Gruaud Larose. I have never been a huge fan of this vintage. After almost two decades, it retains its decadent bouquet with black plum, cassis and touches of dark chocolate. Powerful, yet just a little monotone? The palate is expectedly ripe and opulent, dried blood infused black fruit with a voluminous finish that again, just misses the nuance and personality that this Saint-Julien can deliver in a much cooler growing season. It just hasn’t journeyed anywhere in bottle. 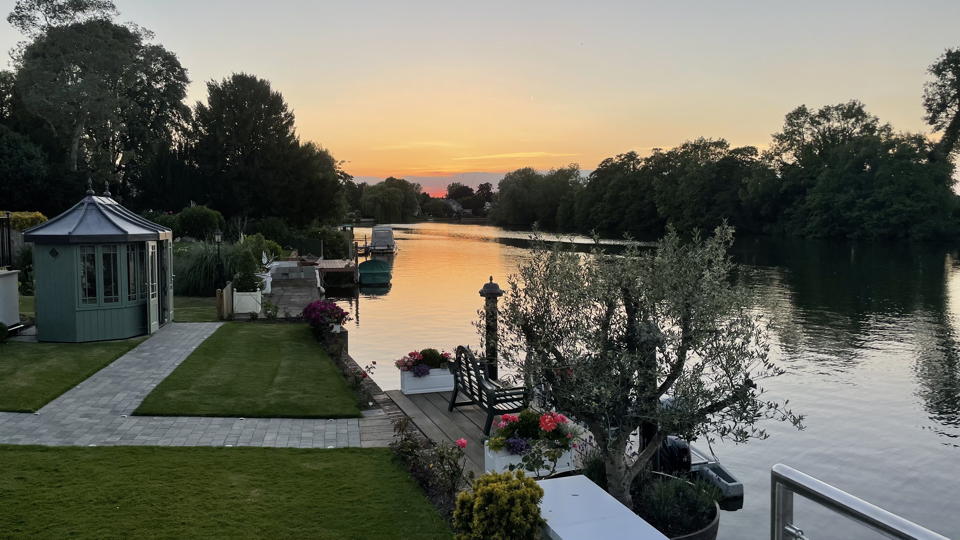 One final photograph of the setting sun silhouetting the riverbank.

The Waterside Inn is everything that one could wish for. Not only with the standard of cuisine, exquisite as it is, but the service, ambiance and without question, the setting. Sitting at the table, watching the sun begin to set and silhouetting the riverbank, I nipped out to take one final photograph. We even had a comedic interlude when one of our party typed in “Waterside” into his Uber cab, only to end up at an alternative namesake miles away in Berkshire. It schlepped miles around the motorway to arrive three courses in – but that’s the pull of such a restaurant and of course, being able to dine with friends after all the restrictions. Prices are typical for this level of fine dining, though less than some places that I have seen in the capital.

My only regret? That I had not booked a room for the night. Assuming that it would cost ££££, I was pleasantly surprised by how reasonable the lodging is. If you are travelling from afar, likely given its out-of-town location, do inquire about accommodation. As it was, my taxi driver was patiently waiting outside.

“Nice dinner?” he asks as he turns the ignition.