(Various branches in the UK)

“Every country possesses, it seems, the sort of cuisine it deserves, which is to say the sort of cuisine it is appreciative enough to want. I used to think that the notoriously bad cooking of the English was an example to the contrary, and that the English cook the way they do because, through sheer technical deficiency, they had not been able to master the art of cooking. I have discovered to my stupefaction that the English cook that way because that is the way they like it.” – Waverly Root, American journalist and author of Food of Italy.

Root was not a man to mince his words, and I would not argue against him. My homeland’s historically feckless efforts in the kitchen are well-documented and justifiably ridiculed throughout generations. Europeans have lived to eat, whereas the English ate to live.

We still do. Forget the fancy kitchen utensils rusting away above kitchen cupboards. Forget the cookery books, unopened and gathering dust. Forget the high-end restaurants catering for the minority that can afford it. Forget the idea that we have a food culture. As a nation, we don’t care too much about what we shovel into our mouths. We shop at supermarkets, not local markets. We are not fussed about foraging for quality ingredients. We sacrificed artisan bakeries, grocers and butchers for convenience and low prices. Let’s not kid ourselves that the idea of “eating well” spans all levels of society from cradle to grave like it does in Japan, Spain or Italy, to name but three. 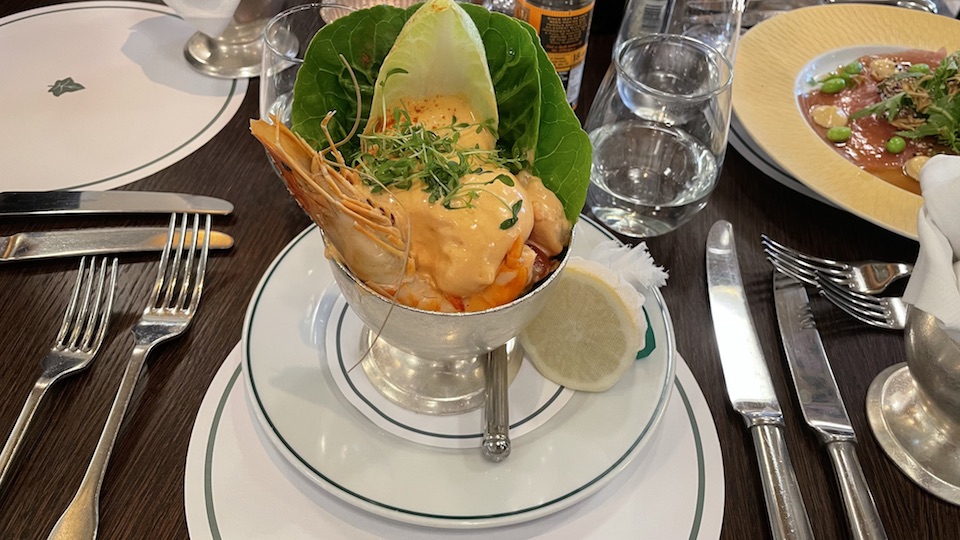 Growing up in the 1970s, I was blissfully ignorant of spices, avocado, fish that was not coated in breadcrumbs, dessert beyond wobbly jelly and 99.9% of foreign cuisine. My diet consisted of frozen fish fingers and chips, frozen burgers and chips, tinned spam and chips, gammon and chips, baked beans and chips, Alphabetti Spaghetti and chips, chips and chips, and Arctic Roll for pudding if wobbly jelly was off the menu. It’s all I knew. When I was about five, my friend’s mum served me a bowl of rice. She might as well have ladled out a plate of maggots. I sat at the table and wept until she chucked some fish fingers under the grill. That the same boy would one day dine at El Bulli with Ferran Adrià is remarkable. That the same boy did not request a huge dollop of ketchup with his sea anemone with rabbit brains, equally so.

Two restaurants took the oxymoron of “English cuisine” and turned the joke to their advantage, albeit in different ways. One has already been covered in a Vinous Table: Fergus Henderson’s game-changing St. John and the idea of “nose-to-tail eating.” However, many people retch at the thought of masticating on ox tongue or bone marrow and prefer to remain in their comfort zone. That philosophy underlies the success of The Ivy. Ironically founded by two Italians in 1917, this institution has served classic British dishes for decades, the iconic original restaurant in the heart of London’s theatreland becoming actors’ favorite haunt. Pop out for some fresh air and you could guarantee Andrew Lloyd Webber would be humming the theme to Cats next to you. Under Richard Caring, the interior was spruced up and the name franchised across the country, so that in recent years, 13 baby Ivies sprouted across the country and are doing a roaring trade. 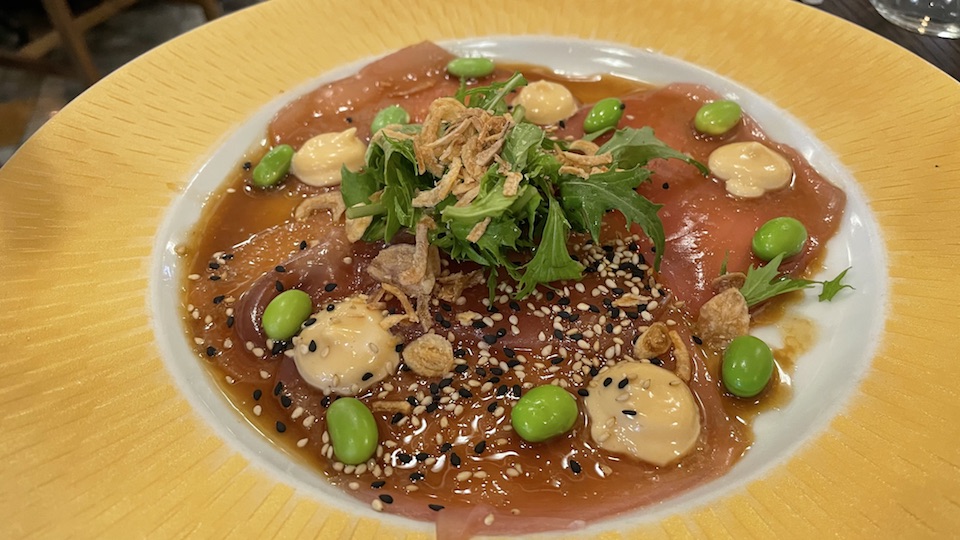 A branch opened in Guildford three years ago. I ventured back the first weekend after the most recent lockdown along with what seemed like half the town’s restaurant-starved population. Located slap-bang in the centre of town, the restaurant boasts balcony terraces with a spectacular view over Guildford’s medieval keep. Like many branches, it caters for a large number of covers per sitting. All branches have the same décor: a mixture of individual tables, cozy alcoves, and comfy leather banquettes, walls busily festooned with colored art and, ingeniously placed at the restaurant’s heart, a cocktail/drinks bar that foments a party atmosphere.

I decided to order the most English courses possible. Nothing fancy. Nothing foreign. I wanted the quintessential English starter, even if I later discovered that its origins are in 19th-century San Francisco: prawn cocktail! King prawns diving head-first into a splodge of mayonnaise doused in citrus lemon, chunks of avocado and crispy lettuce. I know it’s not pushing the boundaries of haut cuisine, but it was delicious.

Then I relented and swerved away from my English-only diktat and ordered a Japanese-inspired dish after receiving complaints from my wife. The carpaccio of yellowfin tuna drizzled with ponzu dressing, miso mayonnaise, edamame and mizuna might arguably be The Ivy’s best dish, the flavors extremely well balanced and the yellowfin impressively fresh. 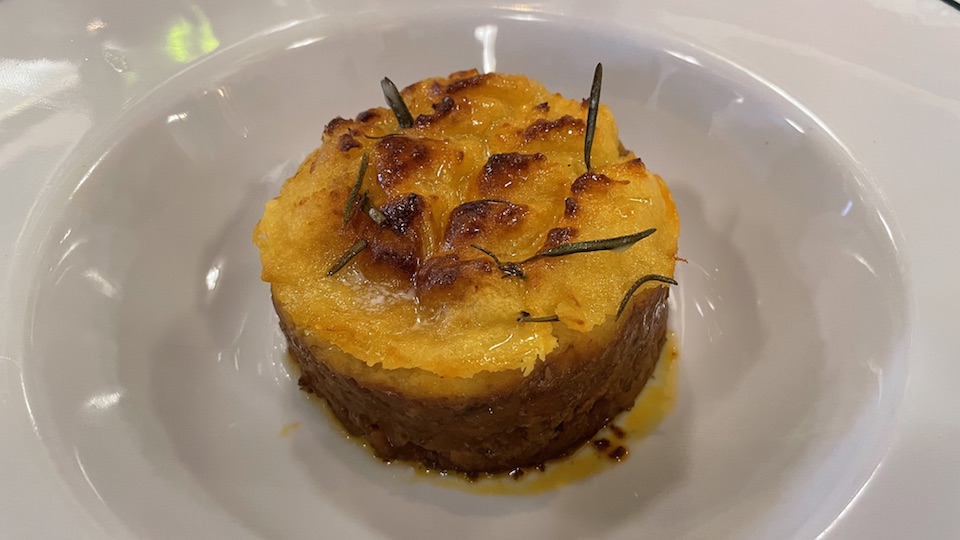 Next, good old shepherd’s pie. Technically, it should use ground lamb. Use ground beef and that’s good old cottage pie (something I did not know until I wrote this piece). The Ivy’s shepherd’s pie uses a mix of both, cooked in red wine and topped with a layer of cheddar potato mash. There wasn’t a huge amount to feast upon, but it was, again, absolutely delicious.

To finish, I ordered the strawberry ice cream sundae: vanilla ice cream with meringue, shortbread and a warm strawberry sauce. It was just scrumptious and I sat on my hands to avoid picking up the bowl and licking it clean. The sundae was accompanied by a chocolate bombe, a gooey sphere of chocolate filled with vanilla ice cream and honeycomb and served with hot salted caramel sauce. Since it contained my annual recommended intake of calories, this was shared. 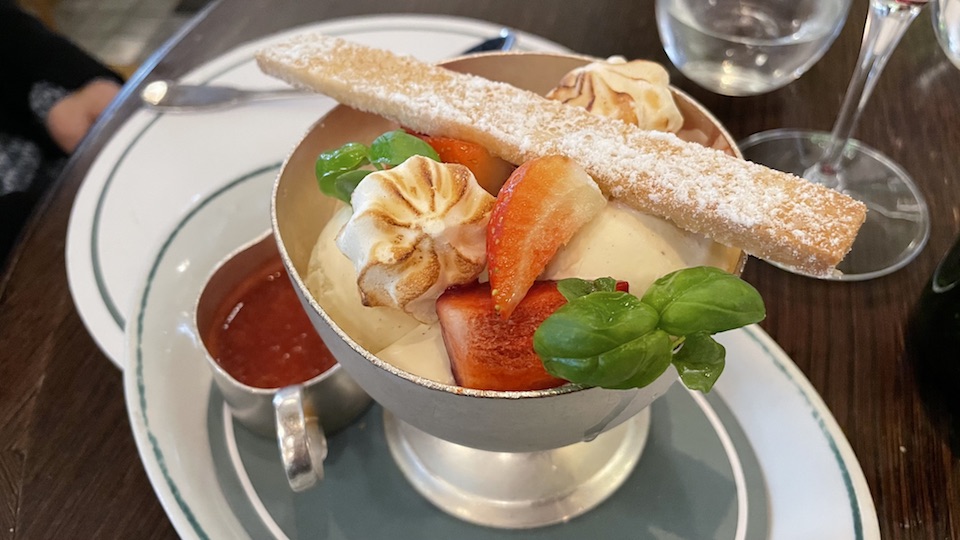 The Ivy has an impressive roster of cocktails, but I stuck with fermented grape juice. The wine list is actually better than you might think, presenting a well-chosen if admittedly conservative range from Old and New Worlds, so you will not find natural wines or cult growers, even though my white wine might be considered one: the 2018 Riesling Haus Klosterberg is from the highly regarded Markus Molitor. Zingy Granny Smith apple and light cucumber scents burst from the glass, simple but effective. The palate is fresh and crisp, and surprisingly austere on the stony finish, which you could argue is a bit short. Next, I was drawn to a Haut-Médoc Cru Bourgeois that stuck out because it was one of the few with a bit of age. The 2006 Peyrabon offers smudged dark plum, undergrowth and tobacco notes, not intense but holding up well after 15 years. The palate is balanced, straightforward and fresh, with blackberry, leather, tobacco and maybe just a touch of VA on the finish, which did not prevent us from finishing most of the bottle. 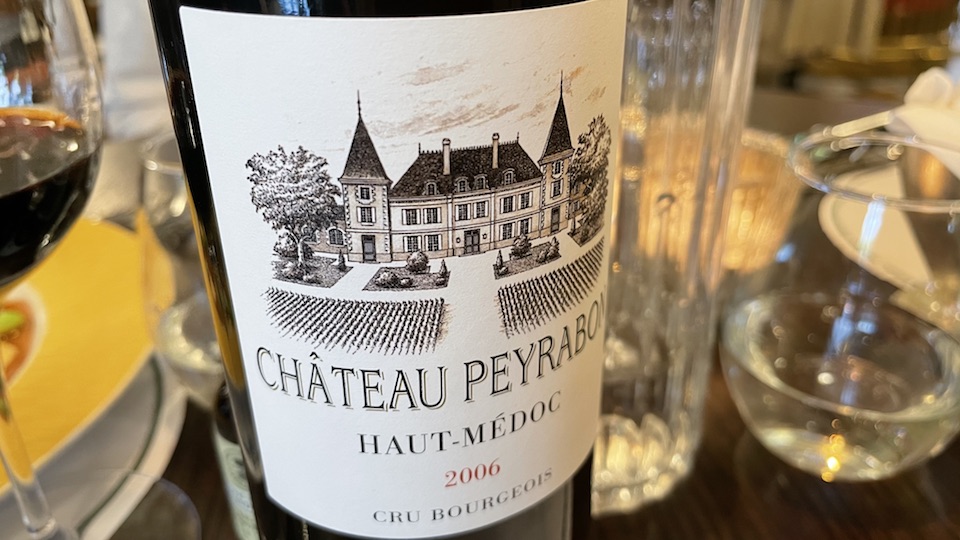 It had been a menu that even my mother, whose epicurean horizons are little changed from the days of post-war rationing, would recognize and devour. And The Ivy does it all consistently, time and again, furnishing it with little touches that make it a bit more finessed than what you might rustle up at home. The genius of the restaurant is that you dine on familiar English food in an atmosphere that makes it feel like the place to be. It buzzes with excitement. Every table is full. It’s noisy but you can hear each other speak. The waiting staff are run off their feet but never lose their cool. The Ivy cultivates a sense of sophistication for ordinary people in provincial towns that are uninterested in faffy technical cooking. Not every person is an epicure or an adventurous eater; they just want to put on a nice dress or shirt for the occasion and enjoy a special night with familiar tasty grub. Perhaps the English should take pride in our measly offerings to the world’s gastronomy. If Waverly Root dined at The Ivy, would he have disparaged English cuisine so vituperatively? Probably. But I bet, he would still have finished every plate and had a good night out.