Driving through Napa Valley today, it’s hard to imagine that anything other than grapes was ever grown here. Even to those august few who remember a time when plum and walnut trees outnumbered vines, it seems the distant and hazy recollection of a dream. This valley craves the grape, and since its introduction in 1838 that natural affinity has been obvious to anyone who paid attention. But Napa Valley’s modern prestige cannot be taken for granted; the path that led here has been fraught with peril, and more than once it seemed that the Napa wine industry had been crippled beyond repair. Prohibition, the Great Depression, two world wars and flanking phylloxera infestations effectively rubbed out Napa’s late-19th-century successes. But the idyllic allure and raw oenological potential of the Valley proved irrepressible, and the vine and its farmer persevered. Against seemingly insuperable odds, Napa has thrived, and today it is counted among the world’s finest wine regions.

America was no stranger to the grape when Europeans appeared; indigenous vines of all sorts crept across the continent. But to the colonizing settlers, grapes meant wine, and the native species were quickly judged unsuitable for fermentation. As such, the various occupying forces of Europe brought their own fine-wine-producing species of vine, known as Vitis vinifera. In California, these cuttings came via the Spanish.

Until Mexico’s War of Independence, all of Mexico and much of what is now the western United States was considered part of New Spain. The religious Spanish monarchy sought to convert its new population to Catholicism. Toward this end, a series of missions were established which brought not only religious instruction to the wilds of California, but also formal viticulture. Overwhelmingly, the grape they cultivated was Palomino Negro (also known as Listan Prieto), a dark-skinned cousin of Andalusia’s primary sherry ingredient. This was a hardy variety, easy to grow, and perfectly suited for the manufacture of sacramental wine. Over time the grape came to be known as Mission for the institution that propagated it. 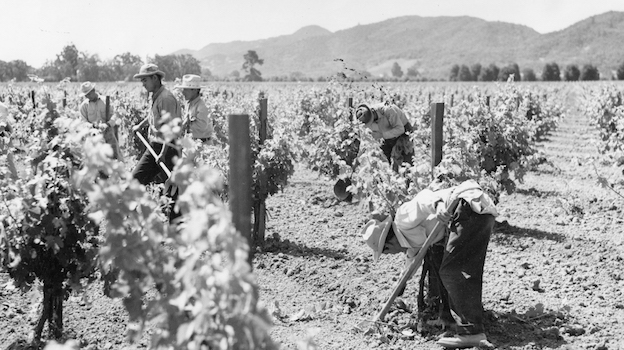 Viticulture from a bygone era

In 1821, Mexico won its independence from Spain, gaining control over California and its missions. The newly sovereign nation ordered that the missions be secularized, shifting the focus of these centers from religion to agriculture. During this time (1834–36), the northernmost mission, Sonoma, was in control of over 700 square miles of land, which included all of Napa Valley. A Mexican General named Vallejo was sent to Sonoma, charged with dispersing the mission’s vast holdings into land grants that were meant to encourage population growth. One of the first land grants Vallejo awarded was to George Calvert Yount, a farmer, trapper, and former employee of Vallejo. His land grant was called Caymus Rancho and stretched across 12,000 acres.

The Napa that Yount inherited was a rugged, untamed place that numbered more grizzly bears than people. Aside from the distinction of being the first Anglo-Saxon settler, Yount set the course of history when he planted Napa’s first vines in 1838 with cuttings taken from Vallejo’s vineyard at the Sonoma mission. This small patch of rough Mission grapes was the first of many to come, as the Gold Rush and California’s induction into the United States launched an era of growth and prosperity that would forever alter the landscape of Napa Valley.

The Mexican–American war raged between 1846 and 1848, with the United States emerging as victor and proud owner of three new states: Texas, New Mexico, and California. To Mexico’s chagrin, gold was discovered in northern California shortly thereafter, and the mad rush west began in earnest. But Americans weren’t the only ones migrating in the hopes of making an instant fortune; the San Francisco Bay area saw a huge influx of Europeans at this time. These immigrants suffused the growing city with the cultural trappings of their native continent, and the wealth discovered in “them thar hills” added to the aristocratic sophistication in the air. Not only did these expatriates have a taste for fine wine, but many of them possessed knowledge of its manufacture. And more than one of these made their way up to Napa Valley.

The roots of Napa’s wine industry began to take hold in the 1850s, but the situation remained largely primitive. By the mid-1850s there were around 50,000 grape vines in Napa, and by 1859 there were over 200,000. The vast majority of these vines, however, remained the inferior Mission variety, much of it earmarked for brandy-type wine production. A handful of enterprising individuals began seeking vines of a higher caliber. One such person was J.W. Osborne, who in 1851 bought a large tract of land south of Yountville and named it Oak Knoll. He imported a significant number of non-Mission Vitis vinifera vines from Massachusetts hothouses, among them Zinfandel and a variety of Muscats. Osborne would go on to found the Sonoma-Napa Horticultural Society with Agoston Harazsthy of Buena Vista Winery. Harazsthy is credited with the introduction of a vast number of foreign grape types into the United States through his travels to Europe in the early 1860s and is considered by many to be the father of California viticulture.

The first rumbles of serious winemaking came in the 1860s. Wishing to improve upon his crude methods, George Yount hired young German immigrant Charles Krug to make his wine. The talented Krug would go on to found his own estate in 1861—Napa Valley’s first true commercial winery. Krug was followed shortly by fellow German Jacob Schram, who founded Schramsberg on the slopes of Diamond Mountain. Thomas Rutherford also established his vineyard around this time, as did H.W. Crabb with his To Kalon. Importantly, these early pioneers all shared a focus on quality varieties, though the wines they produced were far different than the Napa Valley hallmarks of today; the most successful early whites were often sweet German-inspired blends built around White Riesling, and the best reds were often Zinfandel-based “clarets.” 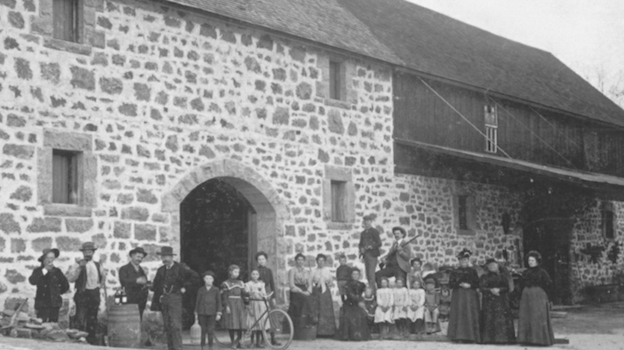 The site of what is now Freemark Abbey, circa 1900

In 1869 the completion of the first transcontinental railroad through the Donner Pass in the Sierra Nevada Mountains quickened the influx of people from the East. The wine industry continued to swell, with two major purchases defining the decade to follow. In 1875, Jacob Beringer, who had worked for years as superintendent of the Charles Krug winery, pooled his resources with his brother Frederick and purchased the land directly across the street, founding Beringer Vineyards. And in 1879 Gustave Niebaum purchased the newly established Inglenook estate. These two wineries would prevail as among the greatest in Napa’s history, and though great changes would befall them over the years, both names continue to resonate in Napa today.

The real boom of the 19th century came in the 1880s, when vine acreage in Napa jumped from 3,000 to over 20,000. At its height, the decade boasted around 140 wineries that produced almost 5 million gallons of wine, figures that would not be seen again until the 1980s. Zinfandel was king, although Napa vintners were starting to take their first hard look at red Bordeaux varieties. Many important wineries were founded during this period. In 1885 John Benson established his Far Niente winery in west Oakville, planting the vineyard to Muscat of Alexandria. The following year saw Alfred Tubbs’ construction of a winery in Calistoga; it would achieve great fame in its later incarnation as Chateau Montelena. In 1888, Greystone (now the home of Napa’s Culinary Institute of America) was completed; with a capacity of 2.5 million gallons, it was the largest stone winery in the world. And in 1889, J. H. Fischer built a winery high on Mount Veeder that would come to be known as Mayacamas.

Things sobered up quickly for Napa in the 1890s, due to the one-two punch of a national depression and the first major phylloxera outbreak. That subterranean pest ravaged the plentiful vines, slashing them back to the 1870s level of 3,000 acres before a “cure” was found in the form of the St. George rootstock. Frenchman Georges de Latour made a fortune selling the resistant plant material, and eventually established his own winery, Beaulieu Vineyards, in 1904. Things in Napa revived slightly after the turn of the century, especially when World War I temporarily increased domestic consumption of California wine, but the gaining sobriety movement and looming threat of Prohibition scared away new investors and kept the recovering wine industry in shackles. Though the temperance movement was a reaction against the evils of hard liquor and saloon culture, the wine industry could not shake the stigma of its alcohol content, and winery after winery shut their doors in anticipation of the inevitable. When the 18th amendment was ratified in January 1919, it was nothing short of a bomb going off in the American wine industry. This “great experiment” effectively wiped out all the early efforts of those plucky immigrants and homesteaders, neatly severing Napa’s past from its present. Today, only the bones of that erstwhile glory remain, in the form of historic vineyard names and the shells of old stone wineries.

To read more about Napa Valley, Then & Now, or to purchase a copy, go to napavalleythenandnow.com.