Ca’ d’Oro Alla Vedova is one of the best of Venice’s simpler, everyday lunch or dinner spots, offering a bacaro-osteria combination at a quality level that very few of the city’s other dining establishments reach. You can stand at the bar counter and down cicheti (Venetian tapas, if you will) and glasses of wine quickly and harriedly (given the crowd that will surround you looking to do the same) or kick back and relax at a small table in one of the old-style rooms. 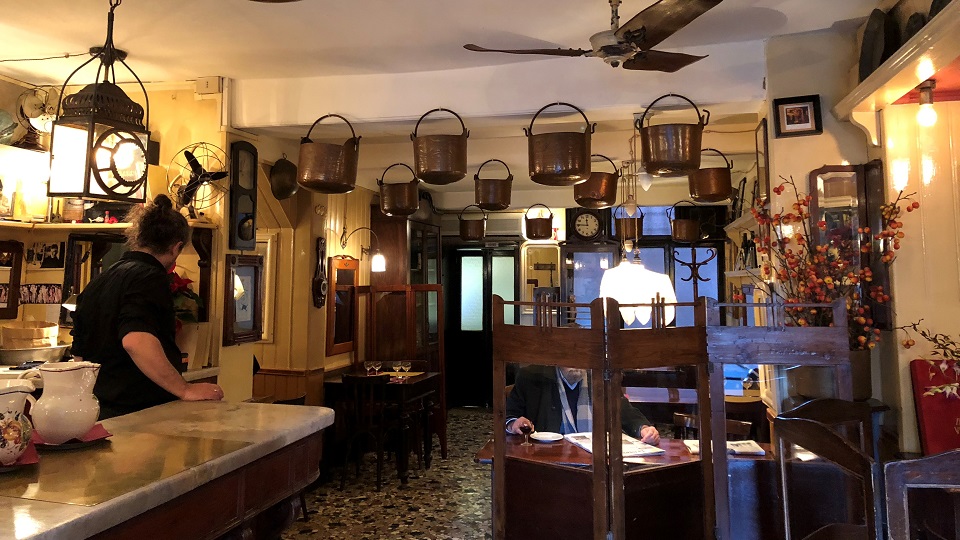 The restaurant’s name has two origins. The “Ca’ d’Oro” part derives from the nearby vaporetto (ferry) stop. The “Alla Vedova” (“at the widow’s”) stems from the long-held habit from perhaps less politically correct times of referring to a restaurant as the “restaurant of the widow” after the man in the husband-and-wife ownership team passed away, leaving the woman to run it. Most everyone in Venice refers to the place as Alla Vedova, and so do I. 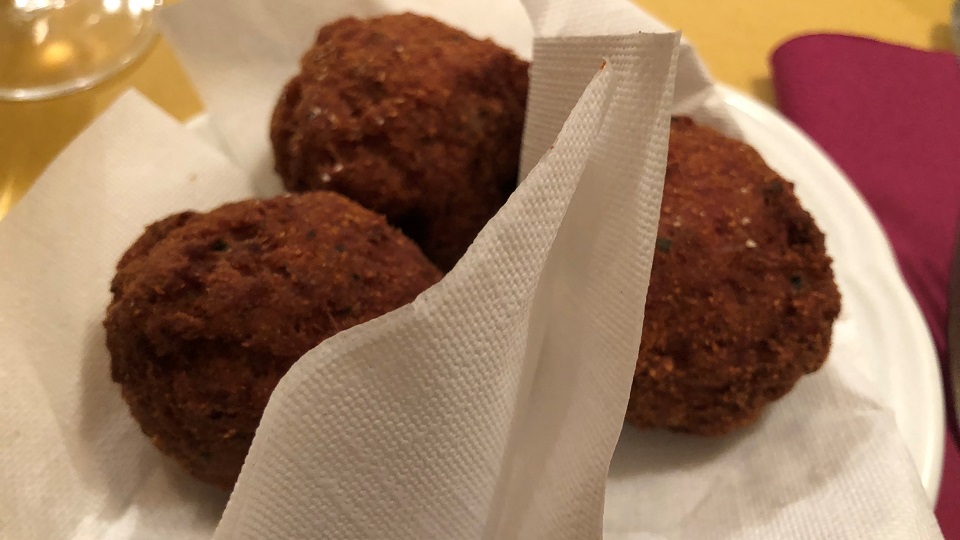 Alla Vedova is a spartan-looking, no-frills eatery with only a short menu and wine list. But there’s plenty to like, as evidenced by the fact that unless you make a reservation (especially at lunchtime), you have no chance of getting a table. Furthermore, negotiating the packed and disorderly lineup at the big bar counter right at the entrance will make you feel like Indiana Jones hacking his way through the Amazon basin. But once you make it through that human jungle competing for food at the counter (as is normally done at all Venice bacaros), you’ll find the rest of the restaurant quaint and relaxing, a place where time seems to have stood still. Brass lamps, old photographs, wood panels and old chairs and tables are everywhere. Service is leisurely and friendly. The food choices are few but remarkably solid. Virtually every dish I’ve ever tried at Alla Vedova has been very good or better. The wine list is even shorter, but there are outstanding estates to choose from, such as Primosic and Pieropan. 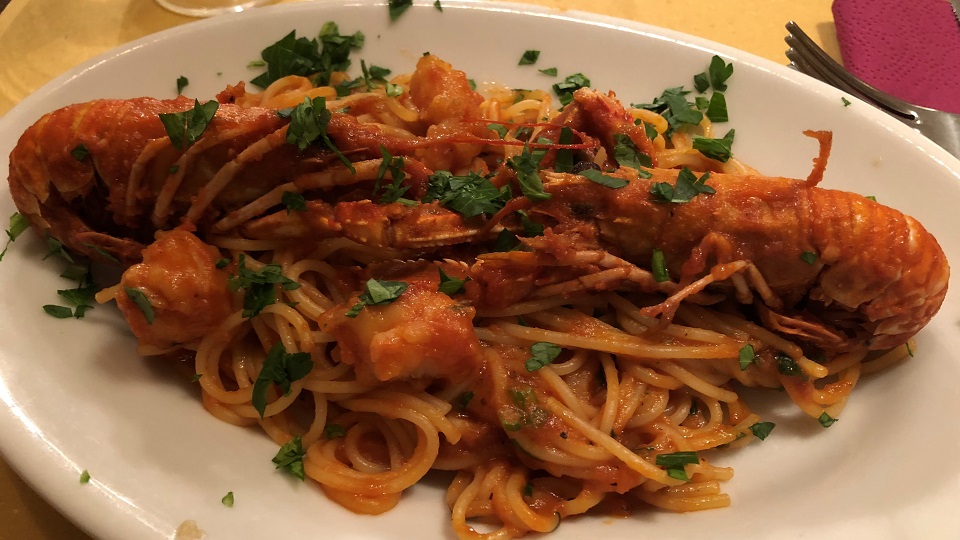 The polpette di carne (light, flavorful, moist, tasty and very well fried meatballs) and the sarde in saor (marinated fried sardines in white wine vinegar, slow-cooked onions, raisins and pine nuts, plus a hint of cane sugar), which is always executed perfectly at Alla Vedova were a terrific start to the meal. Sarde in saor is one of my favorite Italian appetizers, and it says “Venice” like few other things do. The recipe dates back at least to the 1300s (the first official documents attest to the dish being prepared in and around Venice at that time) and allowed sailors to preserve fish while on long voyages because the onions and especially the vinegar helped to slow spoilage. The original recipe also called for many spices not commonly used today, such as cinnamon, cloves and coriander, while black pepper is still included in modern recipes. I also sampled some excellent pasta dishes, including the bavette in black ink sauce and the spaghetti allo scoglio. The fish and crustaceans of the latter were flavorful and fresh, while the former’s sweet, garlicky squid ink sauce was just what the doctor ordered on this cold late spring day in Venice. 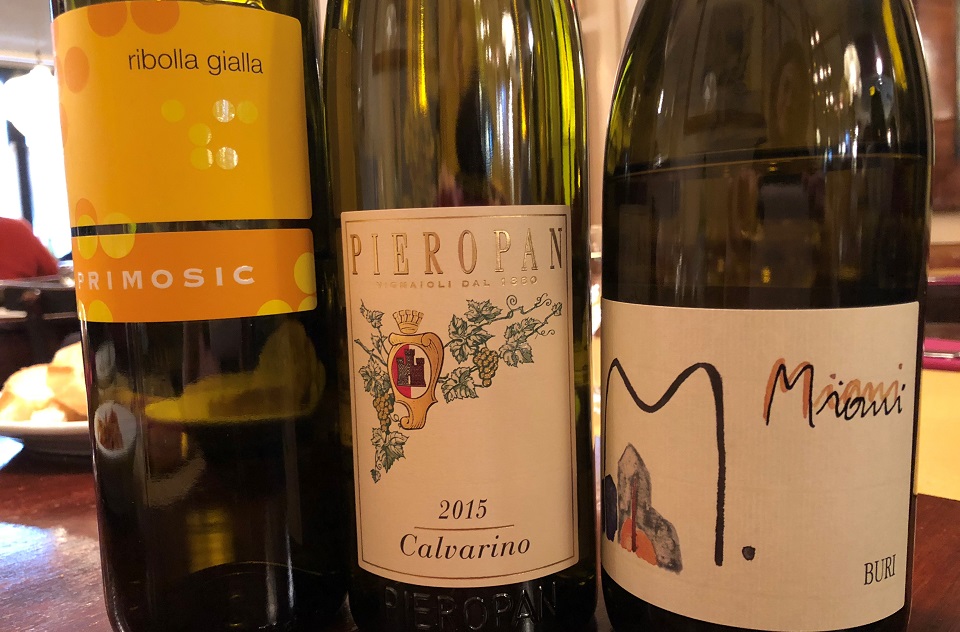 As for the wines, I tried three beauties. The 2017 Primosic Ribolla Gialla is a wonderful version of this wine that is just as it should be: pungently mineral, concentrated and flavorful, offering aromas and flavors of fresh citrus fruit, white flowers and white pepper and hints of saffron. Primosic is one of Italy’s top five wine producers of Ribolla Gialla, and unlike most others, he doesn’t need to turn it into a sparkling or orange wine to get lots of flavor out of the grape. Light and fresh, displaying an easygoing quality but also endowed with sneaky concentration, the 2015 Pieropan Soave Classico always makes an outstanding aperitif or a fine companion to simply cooked fish dishes. I greatly enjoyed its jasmine, buttercup and orchard fruit nuances. Last but certainly not least, the 2013 Miani Friulano Buri (a wine from my own cellar and not on the restaurant’s list) is drinking beautifully and only confirms Enzo Pontoni’s talent with the native grape varieties of Friuli Venezia Giulia. The Buri is drinking beautifully but will last in a good cellar for another decade at least. It is a remarkably powerful but refined white wine that smothers your taste buds in layers of flavor - mint, pear, yellow apple, beeswax, bitter almond - that you won’t soon forget.