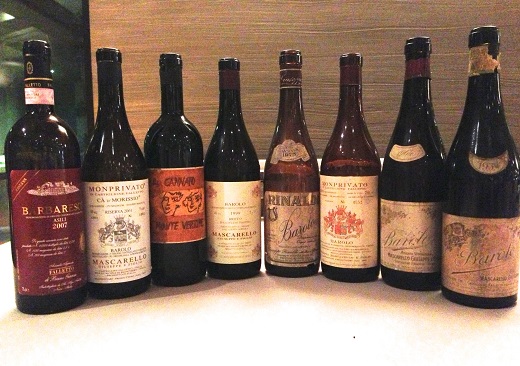 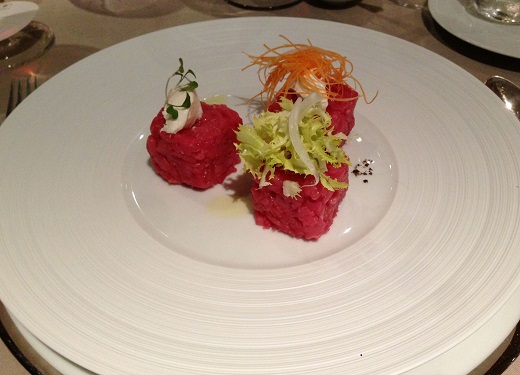 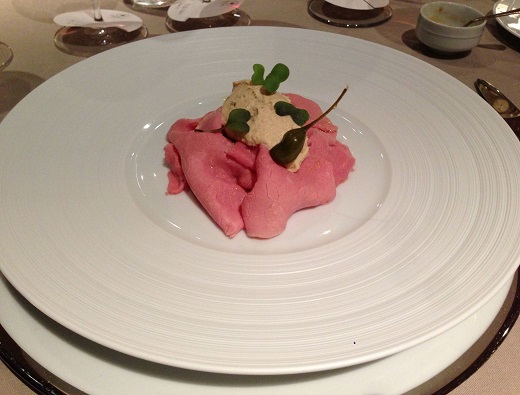 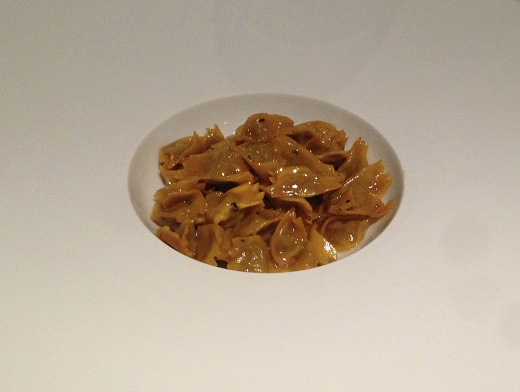 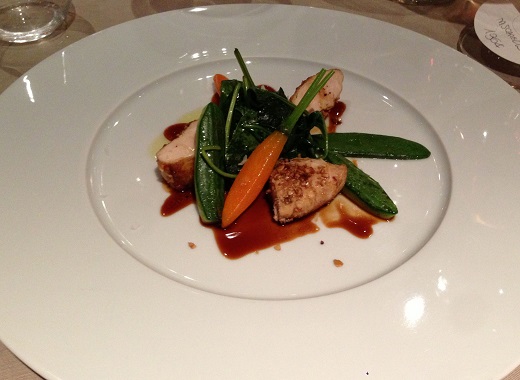 I think it was the 1945 Conterno Barolo. Or maybe it was the 1931 Borgogno Barolo. Maybe the 1970 Mascarello Barolo Monprivato.  Those are just a few of the most memorable bottles I have had the privilege of sharing with Il Professore.

Over the years I have also bought quite a bit of wine from Il Professore, the collector I consider the world’s greatest authority on traditionally made Barolo and Barbaresco. Those bottles, which include numerous examples of pristine wines from the 1950s through the 1980s, are the backbone of my cellar and have played a huge role in my own education. Needless to say, I never miss an opportunity to share dinner and a few bottles with Il Professore.

La Rei seems to be going through an especially brilliant period following the arrival of Marco Forneris, formerly of La Libera. It is unclear how things will develop now that Chef Antonino Cannavacciuolo is consulting on the menu, but I hope things work out.

Dinner was delicious. I opted for the traditional menu. What could be better with these wines? Not much in my book. The carne cruda, which is a tartare made from Fassone Piemontese, a rare breed of beef, was delicious. The presentation may have been a bit updated, but the flavors were classic all the way. That was even truer of the Vitello Tonnato and Agnolotti al Plin, both of which were fabulous. The pheasant with late-harvest moscato, cacao and hazelnuts was a bit more adventurous and not really traditional, but it was deeply satisfying just the same.  The small cookies and sweets served with coffee were more than enough for my sweet tooth.

On this night, though, the focus was on wine. I had been dying to drink – not taste – Jacquesson’s Brut Cuvée 736, following my visit to the domaine a few months ago. This bottle was every bit as great as I remembered. Built on a base of 2008, the 736 was brilliant, focused and chiseled from the very first taste. What a wine!

What can I possibly say about Bruno Giacosa’s 2007 Barbaresco Riserva Asili? That it was stunning? Obvious. Emotional? Of course. From the moment it was poured, the 2007 Asili was utterly captivating. Sweet rose petals and the sweetest of red berries – all framed by silky tannins – graced the palate in this exquisite Barbaresco. Surprisingly open for a young Barbaresco, the 2007 was flat-out beautiful. The style was so deeply personal, I could only wonder why there aren’t more wines like this being made in Piedmont. Wow!

Mascarello’s 2001 Barolo Riserva Ca’ d’Morissio was a formidable pairing to the 2007 Giacosa Asili. Much younger and more powerful, the 2001 Ca’ d’Morissio was more about potential. An exotic mélange of rose petal, plum, sweet cherry and exotic spice notes lingered on the finish in a stunning, breathtaking Barolo of the highest level. Monprivato on steroids. That pretty much sums it up.

Mauro Mascarello has often told me he stopped making his Barolo Bricco because it aged inconsistently. That was certainly borne out by the 1999, a wine that doesn’t have too much in common with the 1999 Monprivato, even though it emerges from a parcel just across the road from that site. The bouquet never really found its focus in a Barolo that was far fresher on the palate than in its aromatics.

Earlier on this trip I spent some time with Beppe Rinaldi, more seeing vineyards than tasting wine. The 1978 Barolo, which was made by his father, was a crazy, crazy wine. Head spinning in its myriad aromas and flavors, the 1978 was simply stunning, but hard to peg as it was always changing in the glass. A dark, mysterious Barolo, the 1978 captured the essence of what makes traditional Barolo so compelling.

In my opinion, Mascarello’s 1970 Barolo Monprivato remains one of the greatest Barolos ever made. I remember taking a bottle of this wine to a dinner a few months ago and my host thinking I was bringing a lesser vintage! Barolo fans know the 1970 is the first Monprivato, and since it was made from a parcel planted with 100% Michet, it is also in a sense the first Ca’ d’Morissio. Still stunning, the 1970 exploded from the glass with seemingly endless layers of dark fruit, leather, licorice, smoke, plums and exotic spices. Readers fortunate enough to own the 1970 need not to worry, the wine will drink well for decades to come.

Some wines are more than wine, they are history. That was the case with our last two bottles. Mascarello’s 1964 Barolo, which was made from Mauro Mascarello’s father, Giuseppe, from a blend of vineyards, was as silky and polished as it has always been. Every time I taste this wine I wonder if making Barolo from multiple sites was such a bad idea after all. Sweet, perfumed and utterly impeccable, the 1964 was simply gorgeous on this night.

I was quite surprised with Mascarello’s 1934 Barolo, a wine I had never tasted. Darker, richer and more powerful than the 1964, it showed remarkable depth, tannin and integrity for a wine of its age. Sadly, these days it is impossible to taste a wine that is 80 years old and not wonder about its authenticity. Still, the bottle and cork were clearly correct, but it is possible that over the years the vintage label might have been swapped with that of another year, accidentally or not. All indications on the bottle, labels and cork, though, looked perfect, and the wine was definitely a Mascarello Barolo, but perhaps not from 1934. Most wines I have had of this age are more advanced, but I confess to not having much experience with 1930s Mascarello Barolos. As for the wine, it was absolutely delicious, right vintage or not.

In case you’re wondering, the sole Tuscan intruder in this dinner, the super-rare 1985 Cannaio from Montevertine, was corked. Ouch. Even so, the 1985 was incredibly finessed, which made the cork taint even more painful. Clearly, this is a gorgeous, gorgeous wine. I hope to be able to taste a more representative example at some point in the future.

One bad wine was not enough to dampen our spirits, however. Far from it. This was another superb dinner at La Rei full of great wine and food, and, most importantly, friendship.