First planted in 1854, Bedrock is one of the most historically significant vineyards in Sonoma Valley’s Central Corridor, a stretch of land that runs northwest from the town of Sonoma and includes a number of notable sites, including Serres Ranch, Old Hill, Pagani Ranch, Beltane Ranch, Wildwood, Kunde and others. In my view, these are among the most pedigreed vineyard sites anywhere in the world. Wine quality hasn’t always captured the maximum potential these sites are capable of, but that is a story for another day.

A Rich and Colorful History

Bedrock has a rich, colorful history that goes all the way back to the mid 1800s. Generals William Tecumseh Sherman and Joseph Hooker, two important figures during the American Civil War, first planted the ranch and built a winery on the site in 1854. The original Hooker Ranch, as it was known at the time, covered one square mile. George Watriss bought the ranch sometime in the 1860s or 1870s, in time to appear as the owner of the property in the 1877 Atlas of Sonoma County. In the years that followed George Washington Whitman, a politician, miner and adventurer, and then Eli T. Sheppard, the former American Consul to China, owned the land.

Sadly, phylloxera exacted its wrath in the late 1880s. Senator George Hearst, the father of publisher William Randolph Hearst, bought the ranch in 1887 and replanted the following year. Hearst grew the property to its largest size ever, 550 acres in total. In 1906, his widow, Phoebe Apperson-Hearst, sold the land to the California Wine Association, a large monopoly active during that time. 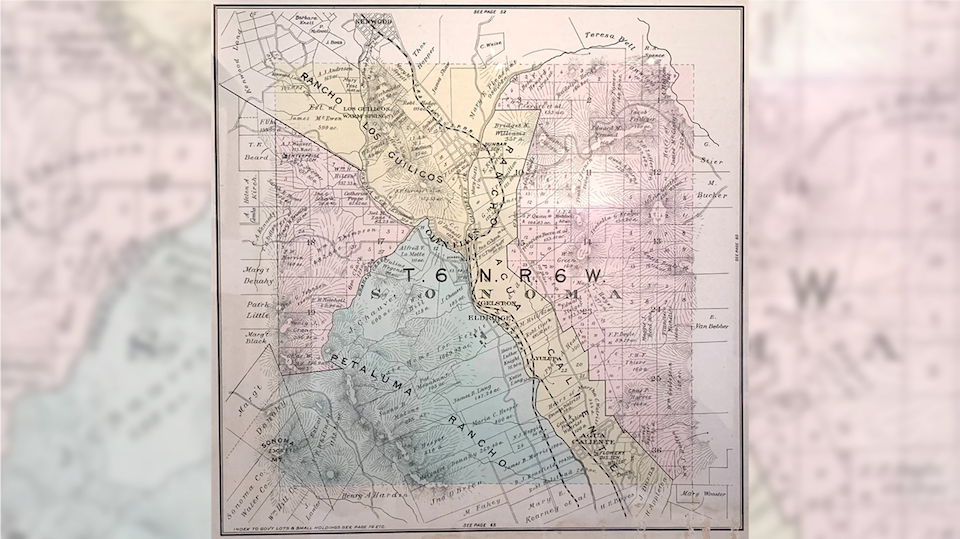 The 1890s map of Sonoma Valley shows property boundaries and owners of the time against a backdrop of the Mexican land grants. The present-day Bedrock and its then-owner Phoebe Apperson-Heart are found in the Rancho Aqua Caliente section, about two-thirds down the map from the top. Photographed at the Bedrock tasting room in the Joseph Hooker House in Sonoma Plaza.

Peter Domenici and Enrico Parducci, Italian immigrants and partners in a sausage business, bought the property in 1934. Twenty years later, the families had a massive falling out and decided to split their holdings, supposedly flipping a coin in the middle of Madrone Road to decide who got what. The Parduccis opted for the smaller plot of land, which included the Valley of the Moon winery, while the Domenicis took the larger piece, an area encompassing the present-day Bedrock, Barricia and Engebreth vineyards.

Morgan Twain-Peterson MW and his father Joel bought 152 acres from the Domenicis in 2005 and rechristened the vineyard Bedrock. A veritable encyclopedia of knowledge, Joel Peterson is one of the seminal figures in the history of American wine dating back to his storied career at Ravenswood. I think it is safe to say no one knows the vineyards of Sonoma as intimately as he does. The apple did not fall far from the tree. Morgan Twain-Peterson is a keen student of history and also one of the most talented winemakers of his generation. Both share a sense of boyish enthusiasm mixed with boundless energy that is palpable. In 2017, the Petersons took over the lease of the historic Joseph Hooker House in the Sonoma town square and converted it to a combination tasting room/museum that is worth a visit, even if just to look at the collection of historical artifacts adorning the home. 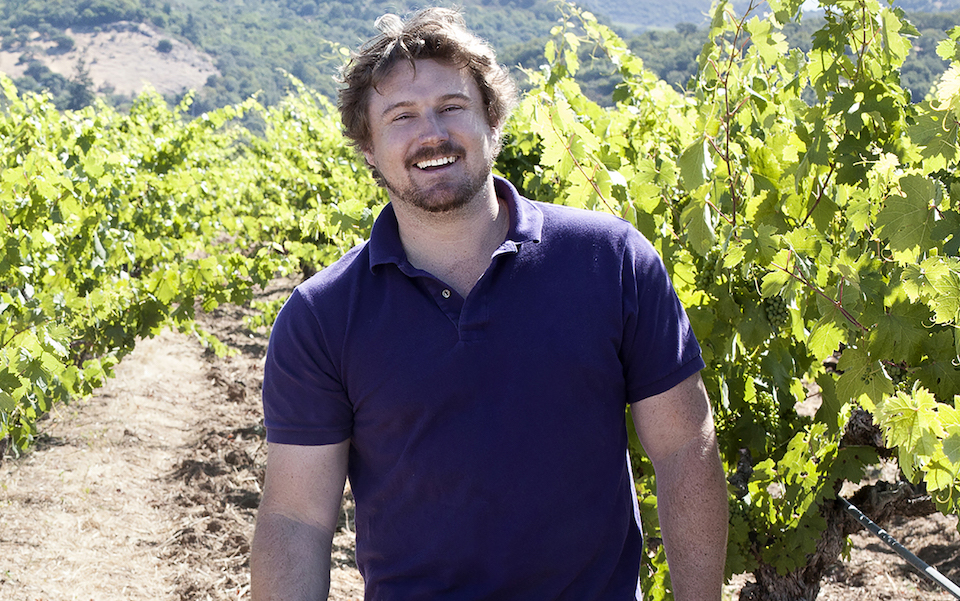 Morgan Twain-Peterson MW in the vineyard.

Bedrock at a Glance

The alluvial soils are a mix of gravel, cobble and clay formed by the run off from Moon Mountain, which is just east and across Highway 12, a relationship that is similar to Eastern Oakville, in Napa Valley, where terrain from the Vaca Mountains (Pritchard Hill) has eroded down to Oakville over time, passing through various plateaus and then settling in a number of stellar sites that lie on both sides of the Silverado Trail. At Bedrock, the soils get progressively deeper moving west, towards Sonoma Creek, which is the same thing that happens in Napa Valley as soils transition from hillsides and benches to deeper and more humid land on the central valley floor.

Zinfandel is the main grape, although there are a total of 27 varieties planted on the ranch, many of them in the ‘mixed blacks’ style favored in the 1880s. For example, the Zinfandel blocks on the map below are Zinfandel-dominant but they are all interplanted with other varieties (ranging from 15-40%), often Syrah, Mataro (Mourvèdre) and Alicante, which helps explain the dark-fruited profile that is so characteristic here.

Bedrock in 3-D on the left and in a block-by-block breakout by variety on the right. On the left, note Bedrock’s position on the valley floor of Sonoma Valley’s Central Corridor, and its relationship to Sonoma Mountain, Moon Mountain and the Monte Rosso Vineyard.

Bedrock bottles their own Heritage Wine and also sells fruit to a number of other top producers, including Biale, Carlisle, Fog Monster, Franciscan, Limerick Lane, Once & Future, Mondavi, Pax, Ridge, Simi and Turley, which makes for some pretty fascinating comparisons. (Readers should note that Ridge uses the historical name “Hooker Creek” for their bottling.) Wines from Bedrock are defined by power, breadth and dark tonalities of fruit, all of which seem to come naturally. Regardless of where producers lie on the ripeness spectrum, all Bedrock wines seem to share these attributes. It is a site where the voice of the land consistently speaks louder than a winemaker’s individual style.

The Bedrock Heritage Wine is a reference-point wine that vividly illustrates the personality and character that make Sonoma field blends so distinctive. It is mostly Zinfandel, but includes important components of Carignane and Mataro that are picked together and co-fermented. (The exception is one tiny block of Carignane that is fermented alone and then added to the main wine.) The idea of the field blend is so ingenuous and remains incredibly relevant, even in today’s world. One of the challenges with Zinfandel is that it can soak up in alcohol during fermentation. The solution? Co-ferment with Carignane and Mataro, both of which tend to ripen later, and are therefore being picked slightly underripe when the field is harvested. It is the marriage of the grapes in the tank and the balance of fruit of varying levels of ripeness that so often yields magical results, not just at Bedrock, but at other vineyards that were planted in a similar manner. 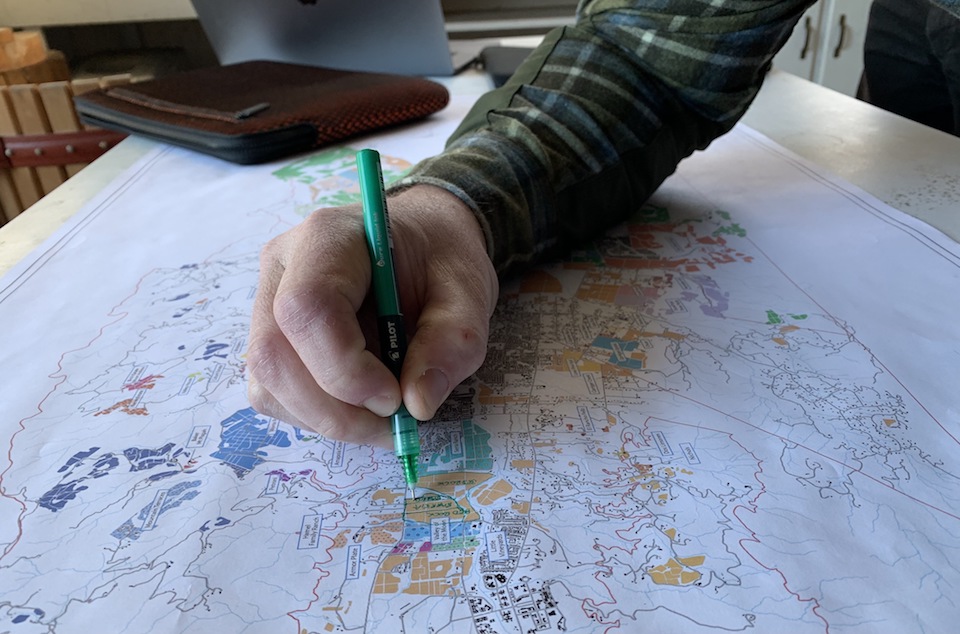 Morgan Twain-Peterson MW identifying Bedrock and several historic parcels in a very early draft of the Vinous Map of the Vineyards of Sonoma Valley, to be published in 2021.

View All Bedrock Vineyard Wines (All Producers) in the Vinous database.

Since 2015 we have been working on a large-scale project to map the vineyards of California. To date, we have published seven regional Napa Valley maps and have several more in the works, including a five-map set of Sonoma Valley and a map of the Santa Lucia Highlands, both of which are nearly finished. Although travel restrictions related to COVID-19 have delayed final, on-the-ground checks that are such an essential part of the quality control process, we are eager to share our work and show you a little bit of what we have been up to through this series of excerpts. We will have much more on Vinous Maps in 2021.