During my mini-tour of London’s Chinese restaurants that called in at A Wong, Hunan and Hutong earlier this year, several readers pointed out that I overlooked one of the capital’s most well-known establishments, “Royal China”. What else could I do than book a table? The Royal China Group owns six restaurants, mainly around West London, plus outlets in Dubai and Singapore. For many years I was a regular at the Queensway branch, a factory line of mouth-watering dim sum executed to perfection. I relished its controlled chaos. Queuing with ravenous customers desperate for a table and waiting for your number to come up. Squadrons of young waitstaff haring between tables, the gaudy mirrored interior and the bill, always half the price expected. For this writer, Royal China was unbeatable. 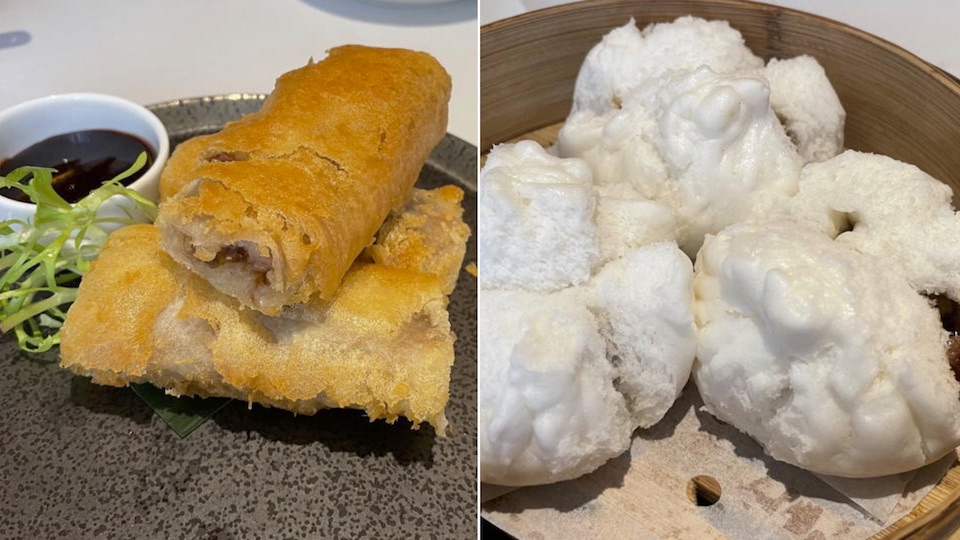 On the left: With its perfectly crispy exterior, the crispy duck sets a high bar for the dishes to follow…and the sauce packed a mighty plummy punch; On the right: I frequently eat Char Siu Bao in London and to date I have not found any better than these puffy clouds of deliciousness.

Then my beloved Queensway branch shut down. Permanently. I couldn’t understand. Despite COVID, it was constantly packed to the rafters. Apparently it had nothing to do with profitability, just the banal fact that their lease expired and the landlords did not renew it. What a shame. My youngest was more distraught about its closure than the pandemic. Fortunately, other branches are thriving, so I booked a table at the original Royal China, known as “Royal China Club”. There are actually two branches on Baker Street, one a sibling of the Queensway branch, the “Club” more upmarket and chic. Head chef Billy Wong’s menu is along similar lines in terms of daytime Cantonese dim sum dishes, but here there is a host of more extravagant dishes such as whole suckling pig for a cool £300.00. 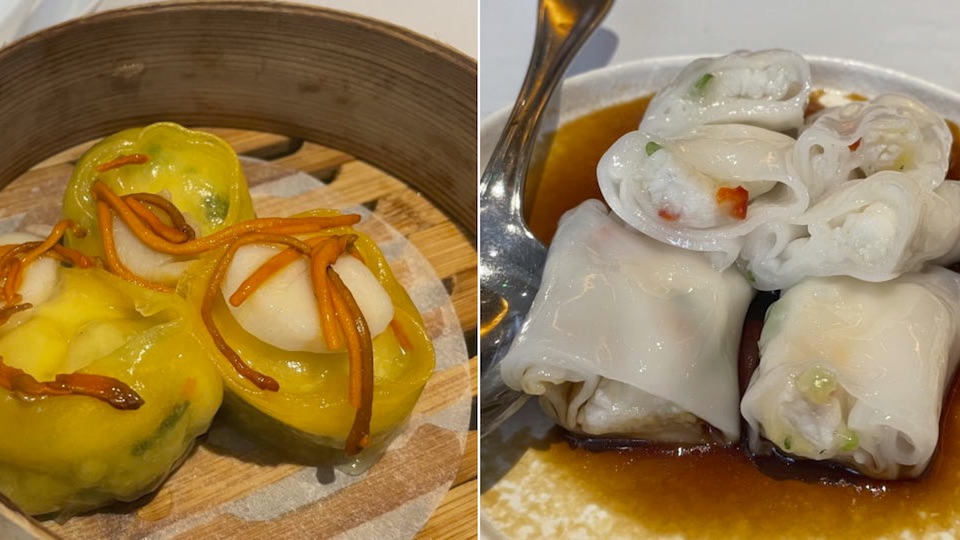 On the left: These steamed cordyceps scallop dumplings were beautifully cooked with perfect consistency; On the right: Royal China is famed for its Cheung Fun. These, containing prawn and chive with a touch of red chilli, were divine, their skins not too thick and the sauce not too heavy.

The difference between the Queensway and Club branches of Royal China are clear as soon as you enter. There is no din. No hollering between waiters or families with ululating infants. I must admit…I kinda miss the hubbub. The decor is much smarter, and whereas the Queensway branch lacked virtually any daylight, here the interior is flooded with sunshine, and the tables are less crammed together. The waitstaff are immaculately dressed, and I spotted no pelting around the restaurant. Essentially, this is a well-oiled machine. 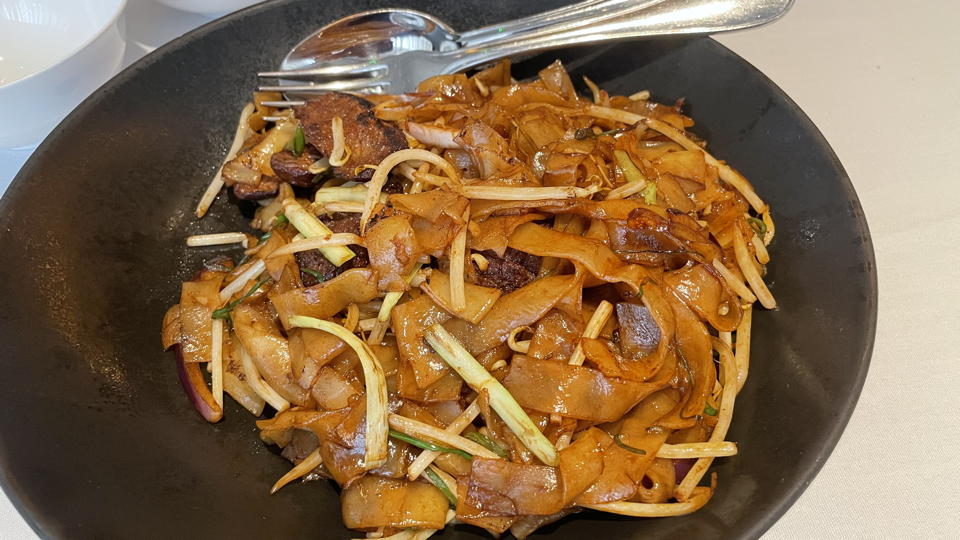 This Steak Ho Fun was elite. Not too greasy and perfectly seasoned.

The standard of cooking here is consistently top-class, with more refinement and subtlety than other dim sum restaurants, I must say, including the original Queensway branch. Back there, perhaps encouraged by its frenetic atmosphere, I tended to wolf everything down. At Royal China Club, the pace is slower and I savour every mouthful. As before, there is little point in describing every dish, but highlights included the crispy duck roll, chilli pork dumplings and the charcoal gold yolk custard bun. 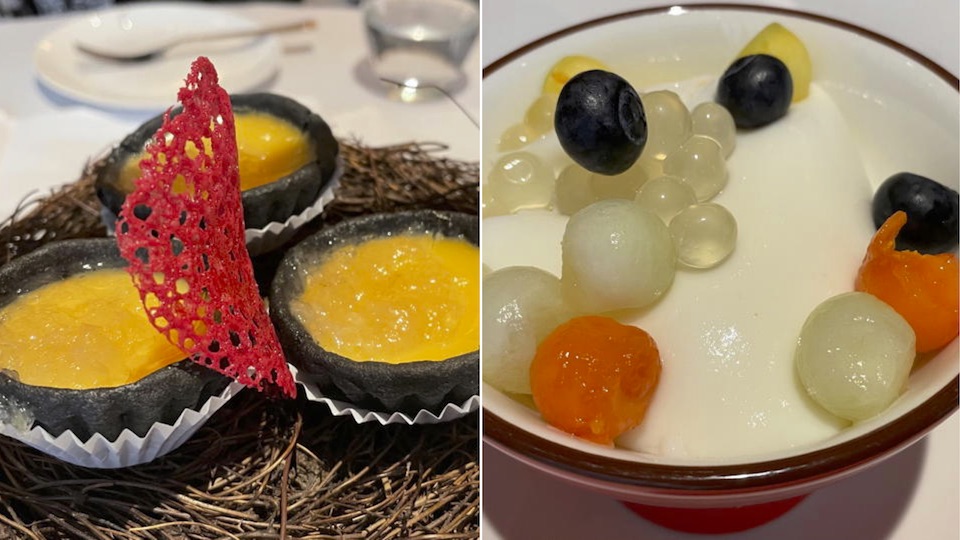 On the left: This charcoal gold yolk lava custard bun was a highlight amongst desserts, the charcoal lending an acrid element to the sweetness of the custard; On the right: The mango pudding was exquisite, minimalist in presentation but utterly refreshing.

One aspect of Royal China Club I commend is the selection of wines that features a number of both red and white by the glass, not to mention a considerable Bordeaux section with almost a dozen offerings per appellation. Beyond the classic regions, the New World is shorter than I would like. In a mood for white, I kept within budget and opted for a 2020 Sauvignon Blanc Origin from a Marlborough producer, Saint Clair Family Estate. For this erstwhile reviewer for New Zealand, it was a pertinent reminder that if you dismiss the country’s Sauvignon Blanc, then you do so at your own loss; it continues to represent terrific value-for-money. The nose is classy and delineated with gooseberry, Granny Smiths and citrus peel scents. The palate, dare I say it, has the poise of white Burgundy, crisp but not shrill with delicious green apple and kiwi fruit notes, delivering palpable energy on the finish. Considering a Claret to follow, it is so good that I ordered another bottle! 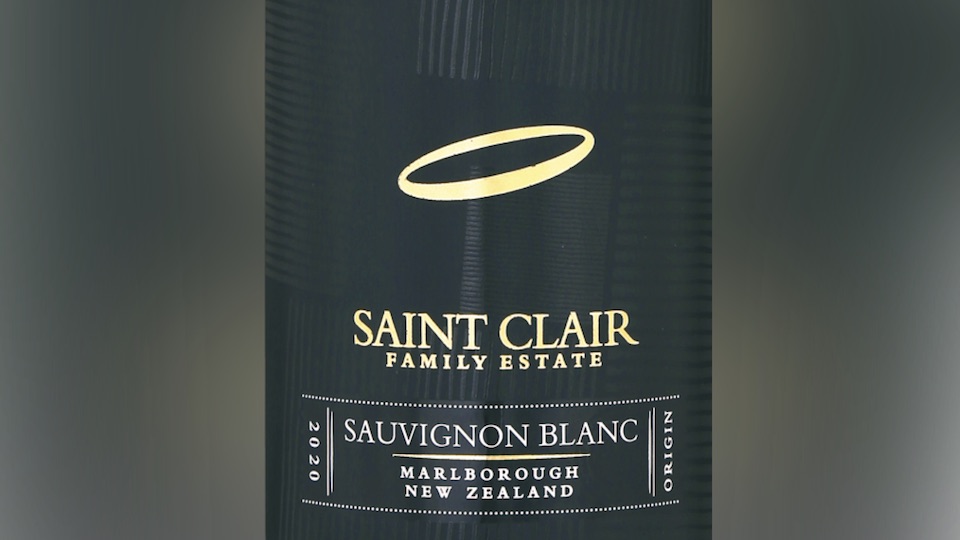 Overall, Royal China Club delivers high-class cuisine with minimal fuss and impressive execution. Despite its location in the heart of London, it manages to conjure the ambiance of a local restaurant. (I assume playwright David Hare must live nearby as he was feasting away with his family on another table.) My only quibble? The 90-minute turnaround time. I sympathise with time limitations as restaurants seek to recoup losses post-COVID. Yet, I feel as if I am eating against the clock and paying for the privilege. Having arrived early, I was asked to leave earlier, to which I replied that I will vacate the table at the pre-appointed time since there could not be another booking before our allotted time. I made my displeasure known, and the manager acquiesced. In the end though, we departed our table fifteen minutes earlier than planned. That aside, I will certainly return to Royal China Club. The ingredients taste a cut above, the cooking is exemplary, and though more expensive than other branches, it is far less expensive than Hutong and A Wong.