Santa Barbara: A Rare Bright Spot for California in 2020

Santa Barbara is one of the few bright spots for California in 2020. Tucked away to the south, far away from fires that were so damaging in the north, Santa Barbara was blessed with far more favorable conditions throughout the year, especially during the critical weeks around harvest. There were some challenges, most notably heat spikes in middle to late August and all of the stresses caused by the COVID-19 pandemic, but overall Santa Barbara fared much better than the rest of California. Based on what I have tasted and seen so far, Santa Barbara produced the finest wines in California in 2020 by a wide margin. 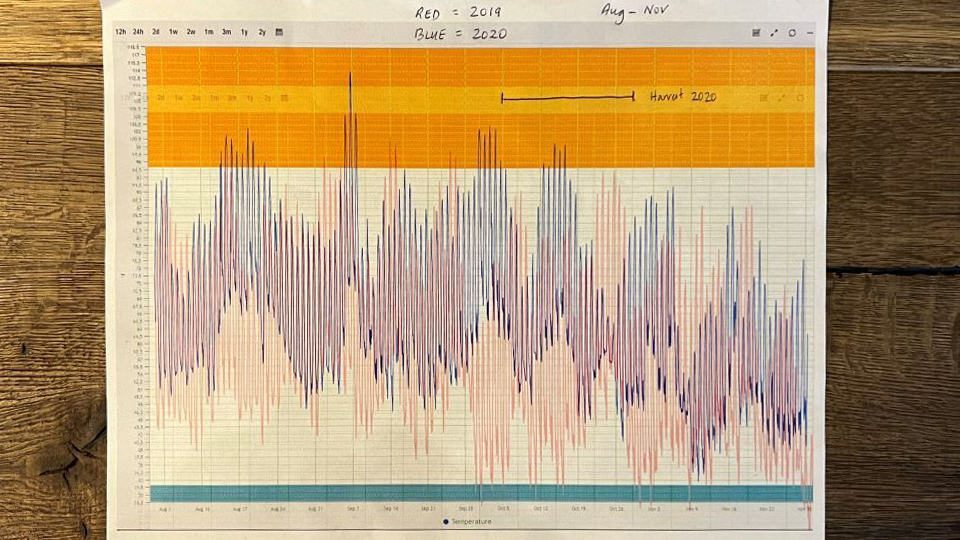 This graph, given to me by Andrew Murray, plots daily highs and lows for the 2019 and 2020 vintages at Murray’s Curtis Vineyard in Los Olivos in the critical period before and during harvest. Temperatures for 2020, plotted in blue, were consistently high during this period, as if the entire spectrum of temperatures had been transposed up.

I have been a big admirer of these wines for some time. The more than 800 wines I tasted for this report only reinforced that view. Best of all, Santa Barbara wines remain, inexplicably, largely undiscovered by both consumers and the wine trade. A quick look at prices for most of the wines in this article will undoubtedly come as a (positive) shock to readers given the massive price appreciation for wines from other regions around the world. Here’s one more tip: when dining out, look for Santa Barbara wines on restaurant lists – they often have the most gentle of markups. 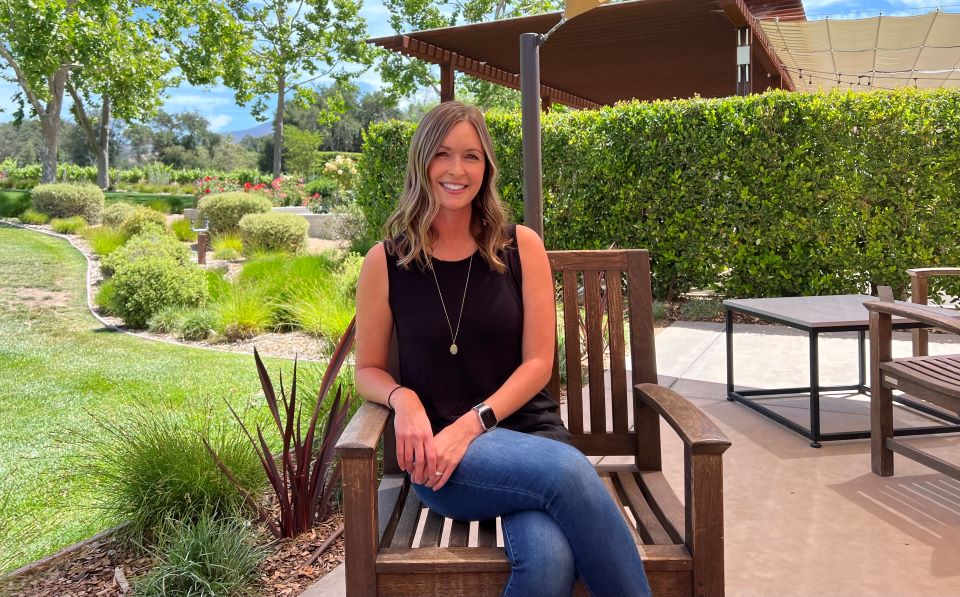 Jill Russell presented the best wines I have ever tasted from Cambria.

Whereas most of California experienced elevated temperatures and drought conditions throughout the growing season, 2020 was actually quite cool in Santa Barbara until a series of heat spikes starting in mid-August accelerated the final phase of ripening. Up until then, summer has been quite cool. The threat of mildew and rot led some winemakers to open canopies. Then everything changed in the middle of the month. Sustained periods of heat led to last minute irrigation and a condensed harvest, in many places, a sort of replay of 2017, although 2017 was warm the entire year, while 2020 was not. “Temperatures reached 114 degrees at my home ranch in Los Olivos. We have never seen anything like it,” Joey Tensley remarked, echoing comments I heard throughout the region. Ultimately there is a sort of randomness to the effect of freak events like sudden heat spikes because so much comes down to simply where vineyards are in their maturation cycle when heat arrives. Many, if not most, producers moved picking times ahead, where possible.

On a much more positive note, aside from one small, highly localized fire at the John Sebastiano vineyard, Santa Barbara was not impacted by the fires that were so devastating in Napa, Sonoma, the Santa Lucia Highlands and other regions. Smoke clouds at very high elevations darkened the skies, but there does not appear to have been any smoke influence on the grapes or wines. Even so, the stark reality is that smoke taint is not fully understood. Recognizing this, some winemakers were extremely prudent. “I destemmed all the Pinots out of an abundance of caution,” winemaker Trey Fletcher explained at Sanford Winery. However, that was not a universal choice. Many winemakers used stems as they would in most years. 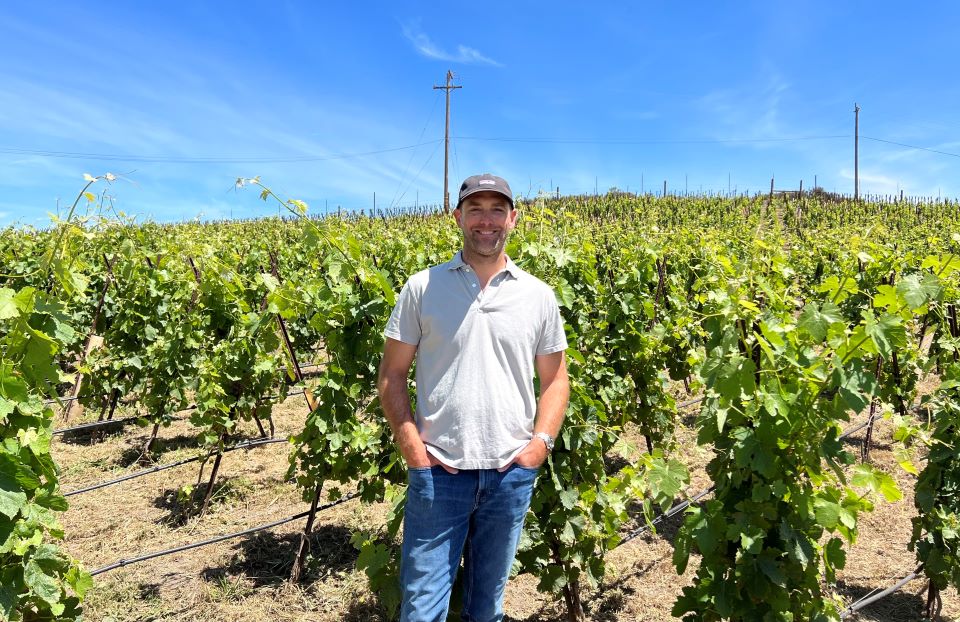 Justin Willet at his new Mae Estate, in front of a block of head-trained Syrah.

Now, with the benefit of more tastings and time, my thoughts on 2020 are a bit different than they were last year. Chardonnay is the clear standout. Indeed, many wines are exceptional. Chardonnay’s thicker skins and generally sturdier character were obviously quite beneficial in dealing with late season heat spikes. Naturally, the 2020s have a bit more flesh on the bones and show slightly riper profiles than in cooler years, but site character is preserved. It’s a very strong vintage and surprisingly consistent vintage for Chardonnay, and whites in general. In particular, the Chardonnays of the Sta. Rita Hills are very fine and make an eloquent case for the variety in a region that remains dominated by Pinot Noir in the collective consciousness of both consumers and professionals.

Pinot Noir is, not surprisingly, more variable. The best 2020 Pinots are deep, rich and viscerally thrilling, just as they were last year. A series of heat spikes, and the timing of those spikes, along with the thin skins of Pinot, were especially challenging. Some wines show clear signs of heat stress and/or vineyard signatures that are not fully developed, which is often manifested as a lack of structure and depth, suggesting some sites may have been picked earlier than optimal. In short, the highs are higher than with the Chardonnays, but the lows are lower. 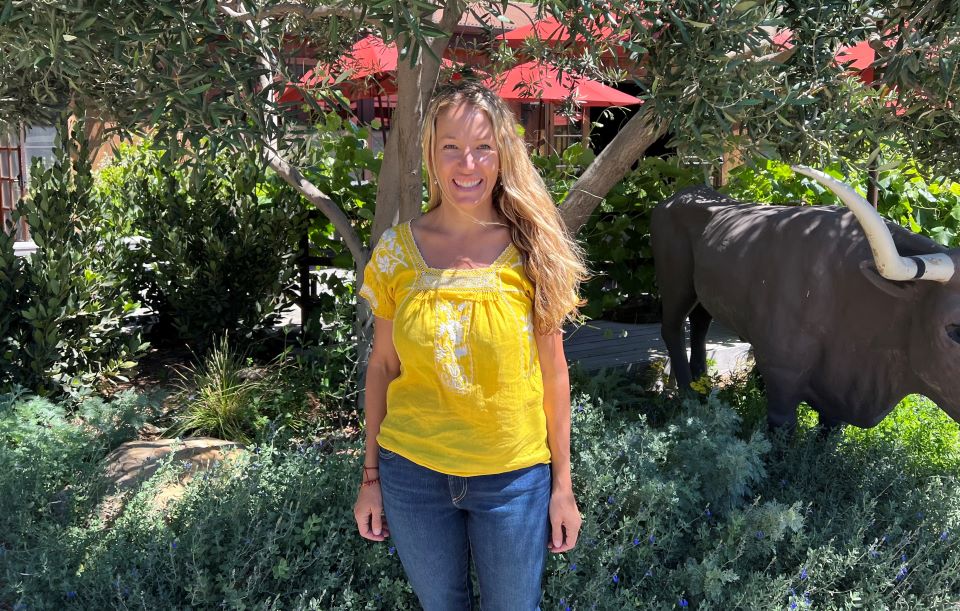 Within Rhône varieties, Syrah fared far better than Grenache. The 2020 Syrahs I have tasted so far are full-bodied, generous and super-expressive. Grenache is the most variable of the main grape varieties in 2020. Some wines are quite good, but most show moderate to heavy signs of heat stress in the color, flavor profiles and/or tannins that aren’t fully ripe.

The production of wines was severely influenced by the COVID-19 pandemic. Labor was very tight, a situation exacerbated by the simultaneous ripening of many vineyards. "Two thousand-twenty was the most stressful vintage I have ever seen. It had nothing to do with the weather, but in finding crews to work because of COVID," Bill Wathen explained at Foxen, highlighting a whole set of logistical challenges producers faced.

With restaurants still closed and little visibility with regards to the on-premise part of the trade, small wineries that depend on those channels often felt they had no choice but to get out of grape contracts. Others bottled less wine or bottled less of their top wines and more of their less expensive wines, offerings they had greater confidence of being able to sell through. Interestingly, the last minute availability of fruit created opportunities for wineries up north to buy grapes just before harvest so they could at least have something to offer their customers. 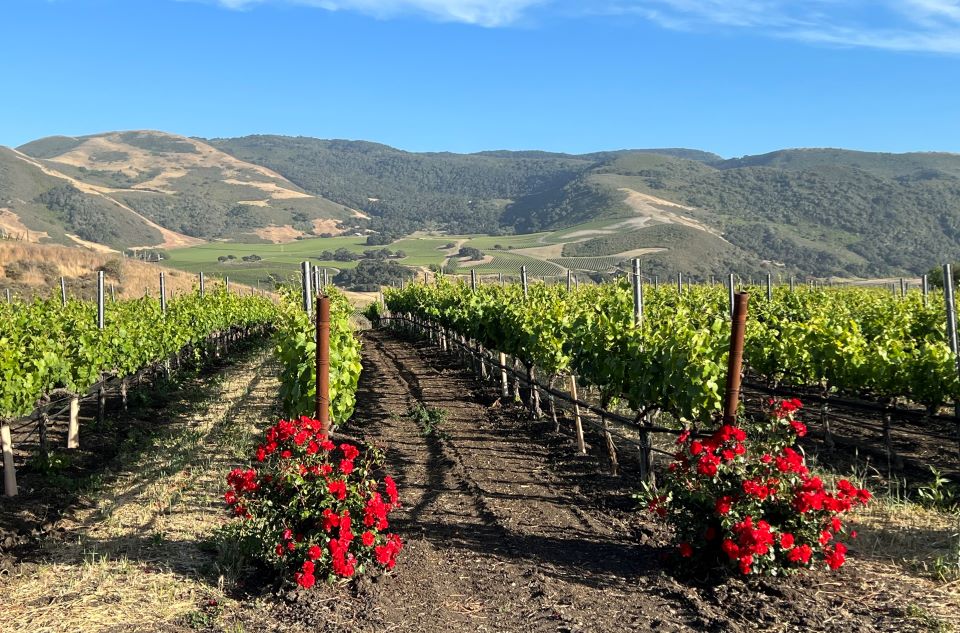 A striking view of the Sta. Rita Hills, with Sea Smoke in the foreground, then Fiddlestix and Sanford & Benedict across the valley.

Many producers are releasing their 2019s. I wrote about the vintage last year. Tasting the wines reminded me of how strong 2019 is for Chardonnay and Syrah. The Pinots are a bit on the lighter side, but the best are wonderfully transparent and expressive.

Two thousand twenty-one saw a return to more typical conditions for Santa Barbara. Cool weather yielded nervy, taut wines with great energy and tons of delineation. I have just started to taste the vintage, but the first wines are seriously impressive. When all is said and done, 2021 could very well turn out to be an exceptional vintage for Santa Barbara. 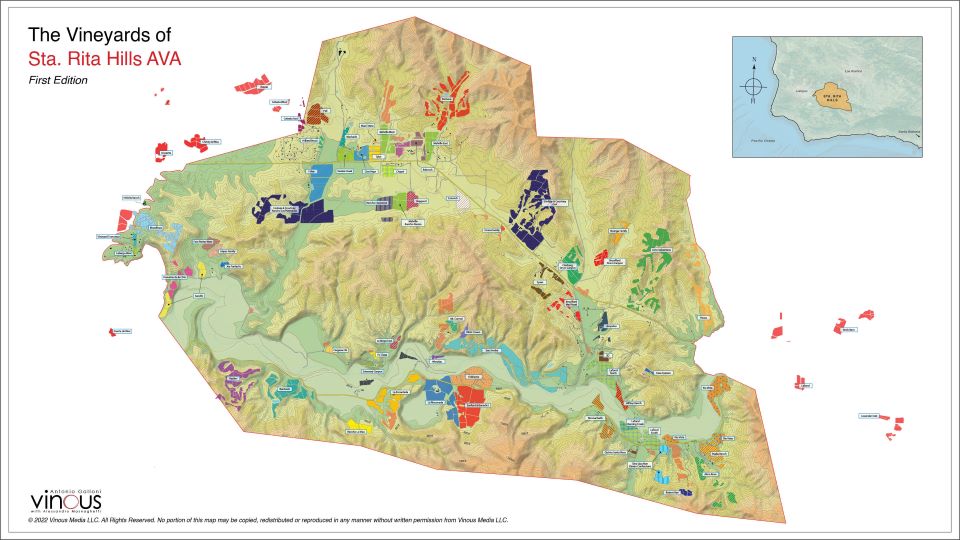 We continue to work diligently on our map of the Sta. Rita Hills, shown above in its current form. At first glance, the map shows how little of the appellation is planted to grapes and also makes clear where clusters of important vineyards lie. A series of single property maps accompany the large map, two of which are shown here for illustrative purposes. 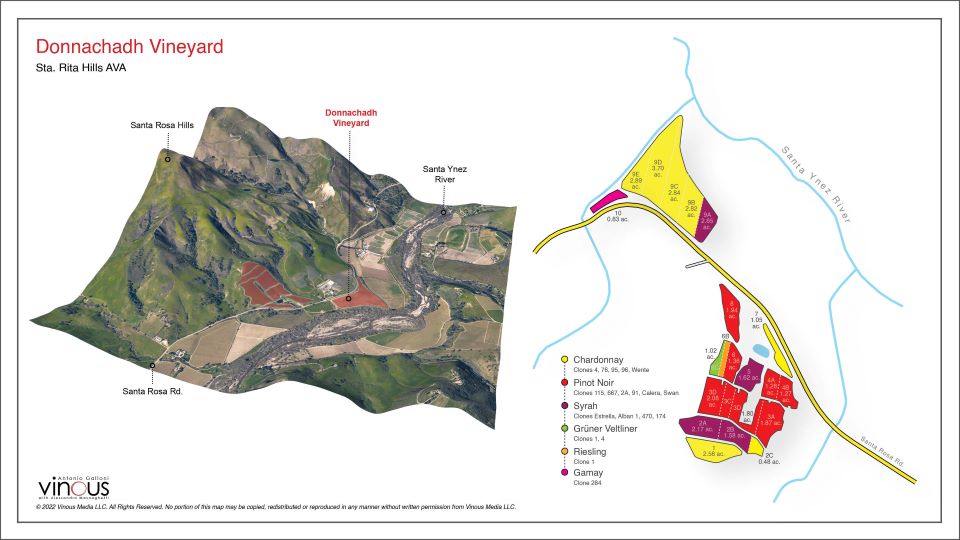 The Duncan family’s Donnchadh vineyard is one of the most important new developments in the Sta. Rita Hills. The Duncans sell fruit to a number of high-end wineries and also make wines under their own label. This map shows the two main portions of the vineyard, one more or less flat, the other a striking collection plots pressed into the hillsides.

Readers will notice a growing number of wines from San Luis Obispo Coast. This newly established AVA just north of Santa Maria is increasingly producing notable wines full of cool-climate, savory intensity. I tasted a number of terrific wines this year and expect to see more in the future. 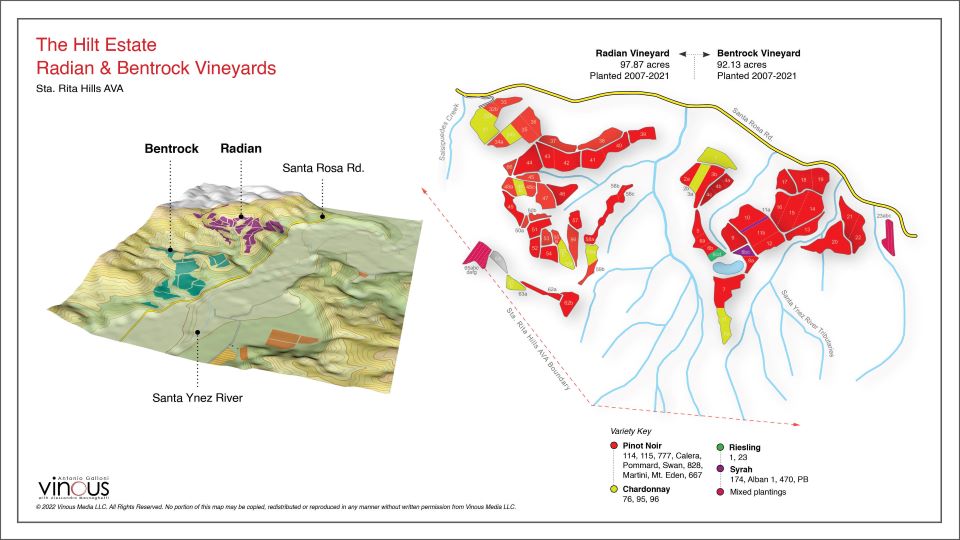 Radian and Bentrock are two of the most compelling sites in the Sta. Rita Hills.

For readers looking to explore Santa Barbara, this is a collection of essential wines. These aren’t necessarily the highest scoring wines in this report, but wines chosen for what they represent, what they express.

2020 Dragonette Chardonnay Rita's Crown Vineyard – A towering (literally) Chardonnay from one of the finest vineyard sites in the United States.

2020 Foxen Syrah Old Vines – Syrah at elevation is compelling here, one of many standout wines in the Foxen range.

2020 The Hilt Pinot Noir Radian –Bold, lush and captivating, Radian at its finest.

2020 Jonata El Alma de Jonata – A modern-day example of what Cabernet Franc can be in Ballard Canyon. Tremendous.

2019 Kunin Wines Syrah Alisos Vineyard – Treasure it while you can, as this Alisos Canyon vineyard is on the endangered species list.

2020 Sandhi Chardonnay Bentrock – Stated simply, this is what Bentrock Chardonnay is all about.

2020 Storm Pinot Noir Sanford & Benedict – Ernst Storm crafted one of the wines of the vintage with his 2020 S&B Pinot, the finest example I have tasted from this iconic site in 2020 so far.

2020 Tyler Pinot Noir La Rinconada Vineyard R22 – One of the most distinctive and riveting Pinots in Santa Barbara. 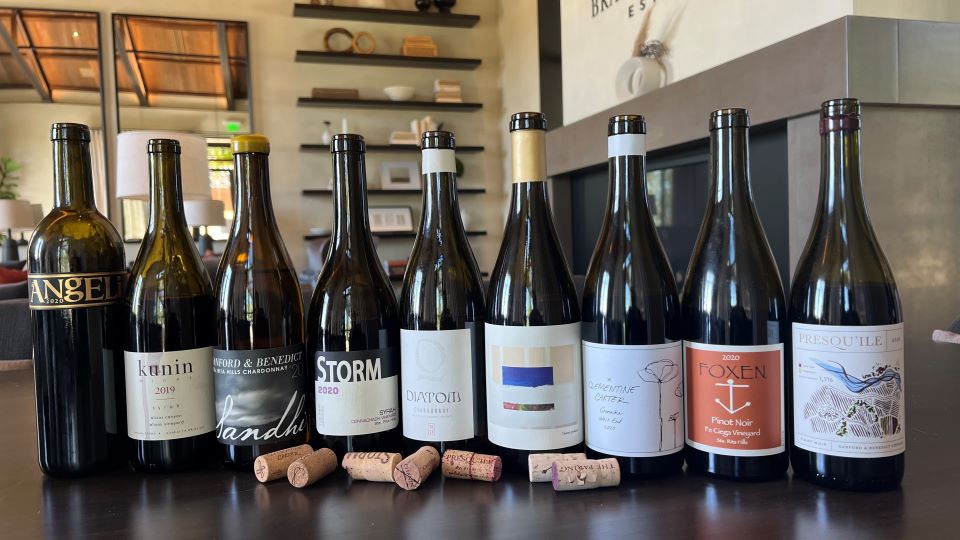 A collection of some of the most intriguing wines in this report.