Oysters ought to be off my menu, bivalve non grata. In New Zealand around 10 years ago, I attended a grand banquet where guests gorged on oysters piled onto silver platters. If oysters really are an aphrodisiac, then there must have been a Roman orgy that night, though nobody told me the hotel room number. By the end of the evening I was half man, half oyster. Then, the following morning, my stomach began churning. I flew down to Central Otago and arrived white as a sheet, my innards doing cartwheels. By the time I reached Felton Road, my metabolism was in meltdown. Perpetually chipper proprietor Nigel Greening welcomed me at the winery, where there awaited a magnificent al fresco picnic, picked fresh from his biodynamic garden. He introduced his wife and children, and I mumbled: “Where’s your toilet?” It was right next to the picnic, the window open so that for the next 20 minutes his family could sit and enjoy the sound of me vomiting my guts up, the sweet whiff of bile wafting in their direction. Suffice to say, Felton Road’s new releases had to wait another day. None other than actor Sam Neill saved me. When I arrived later at his Two Paddocks winery, Neill whipped up some egg-based cocktail that put me on an even keel, and even as I gulped it down, I vowed that one misbehaving oyster would not deprive me of my favorite delicacy. Within a month I had tentatively ordered oysters again. My “heroes in a shucked shell” were back on the menu. 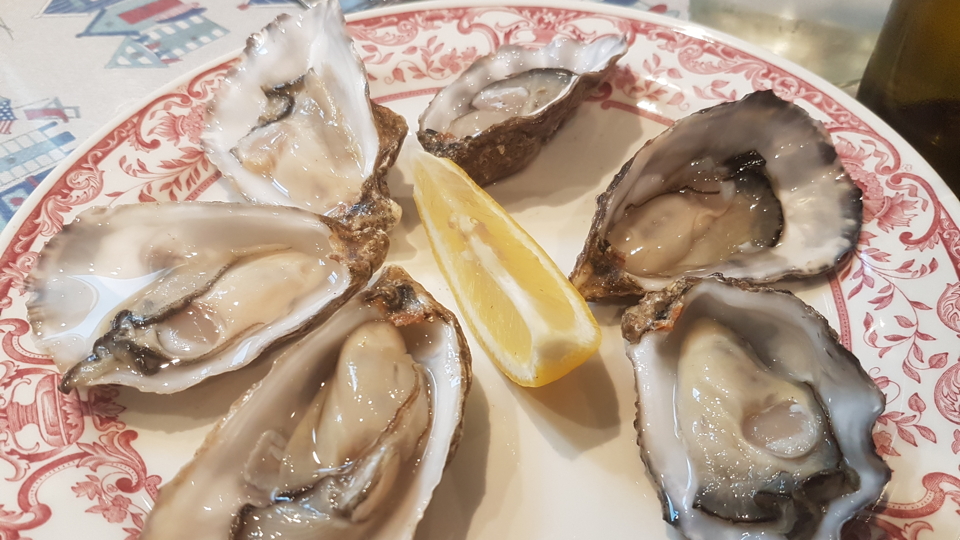 Last year, in a month containing an “R,” I found myself hankering for the finest oysters known to mankind. Usually I eat them in Bordeaux, since the Gironde estuary is chock-full of oysters and they are cheap compared to their English counterparts. Instead of booking some overpriced seafood restaurant in London, I decided to head to Whitstable. This north Kent coastal town has been renowned for oysters since the 15th century and to this day supplies many fine dining establishments. The oyster beds lie in the intertidal waters of Whitstable Bay, and the oysters are processed quayside. There are several places to eat them fresh in town, and the most famous is Wheeler’s Oyster Bar, which is where I booked a table.

Wheeler’s has a long history. It was founded in 1856 by former master mariner Richard “Leggy” Wheeler. The town was then producing an incredible 100 million oysters per year, the dish seen as a valuable source of protein for the working class. In 1929, Wheeler’s opened their flagship branch in Old Compton Street in Soho. More and more branches opened around the capital, but the industry withered due to a series of cold winters, pollution and a parasite, Bonamia ostreae, that devastated oyster beds in the Eighties. Wheeler’s shrank in tandem, until the last man standing was the original branch in Whitstable. Forget Michelin stars, snooty sommeliers, zinc bars or Blumenthal-approved oyster foam reductions – Wheeler’s is not a fancy-pants restaurant. The pink facade is quaint and utterly charming, straight out of a children’s toy town, and resplendent with a mural of a gentleman’s hand proffering a plate of oysters, just in case the raison d’être of Wheeler’s was unclear to passers-by. Stepping inside is like walking back in time. The interior is not shabby or dirty, but certainly not salubrious or chic. Knickknacks have gathered on shelves since time immemorial. Diners sit on wooden chairs, and tables are decked with wipe-clean tablecloths sporting childlike nautical images. A cold seafood counter is housed at the entrance for those wishing to grab a quick bite to eat; behind it are two parlors, the first with separate tables and the second with trestles shared between parties. The kitchen lies yonder. 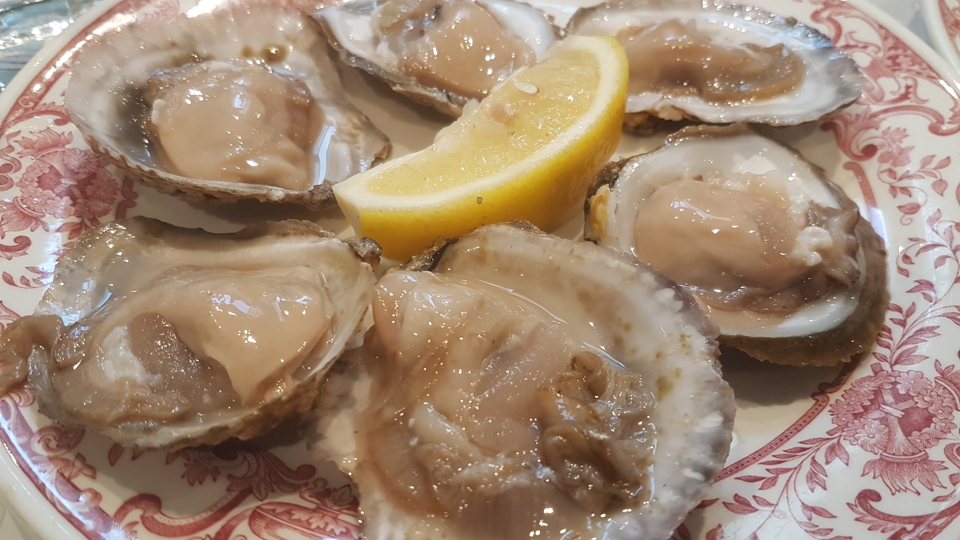 What Wheeler’s lacks in looks, it compensates for with simple, delicious seafood. Pilgrims visit from all corners of the world; I spent my lunchtime accompanied by a honeymooning couple from Chicago and two chattering ladies from Tokyo. Wheeler’s is great value compared to London restaurants – it is not a place where you need to spend a fortune. Annoyingly, I was unaware that they have no alcohol license, so instead of packing a cheeky magnum of Montrachet, I was forced to forage for something drinkable at a rather basic wine shop opposite (more on that later). Service is good, although they did forget our order, so that our mains took an hour to arrive. We received an effusive apology and a discounted bill.

Naturally, we began with oysters, choosing half a dozen of two types to compare: six Whitstable Rock oysters and six Wild Whitstable Natives. The former originates from the Pacific and takes around three years to grow. Natives were introduced to Kentish waters by the Romans; they are only available when there is an “R” in the month, take twice as long to grow and are more highly prized and expensive. I was surprised how different they tasted, the former sharper and more saline, the latter larger and creamier in texture, which surprised me because I thought that Natives were supposed to taste more briny. It might be sacrilege, but I found the Rock oysters more to my taste on this occasion. 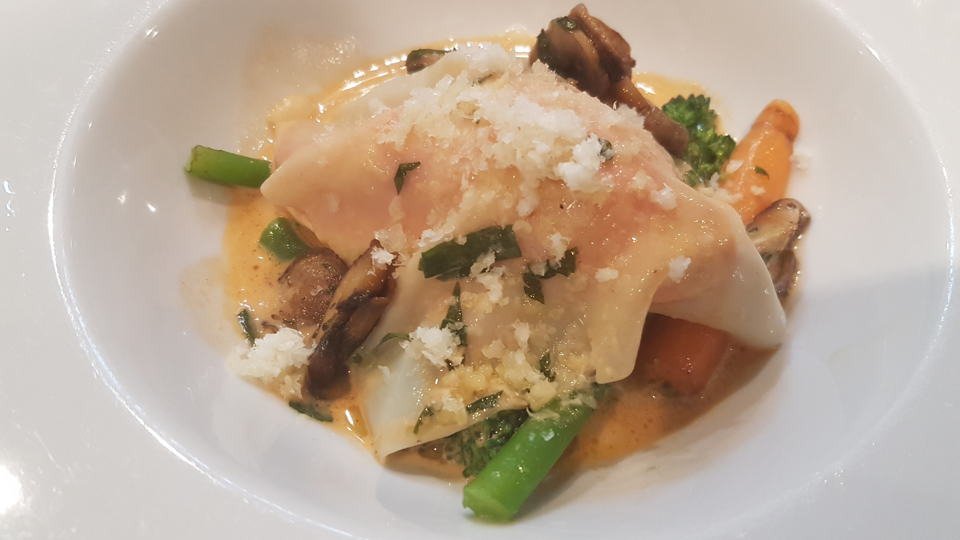 Our next course was an outstanding starter of lobster lasagne with leek and crab ragout, cultivated mushroom, tender stem broccoli, lobster sauce and grated aged Parmesan. My word, this was worth waiting (an hour) for: packed full of flavor yet  surprisingly understated. The lobster and crab were absolutely delicious and combined perfectly with the mushroom and tender stem broccoli. 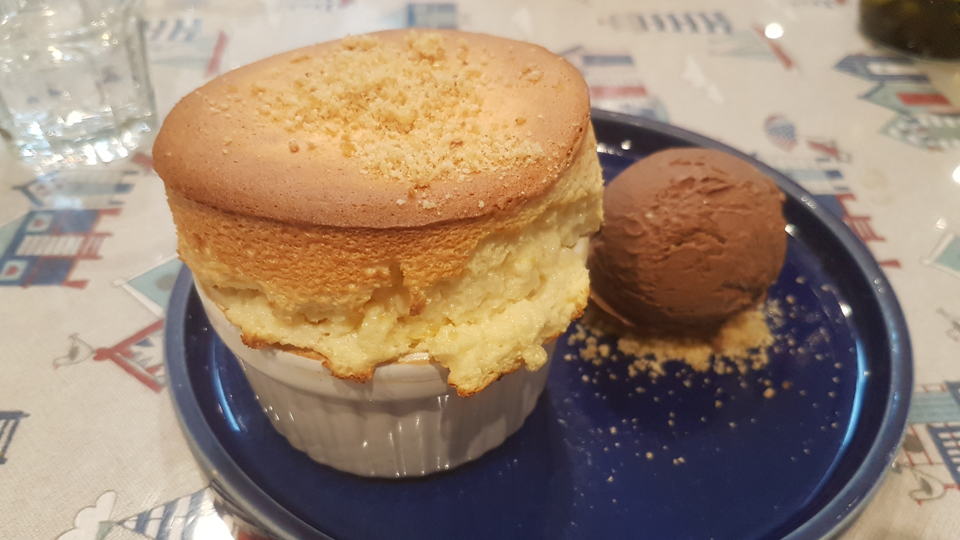 I had to finish with an orange and hazelnut soufflé with bitter chocolate ice cream. The soufflé delivered the perfect consistency, light and fluffy and collapsing in exactly the organized manner you want as you dip your spoon in. The bitter chocolate lent the dessert a pleasing edge and contrasted beautifully with the soufflé.

Coming back to the wine: In the past, I have meted out criticism of English dry wines, since I have always been more taken by our sparkling whites, and I don’t particularly like the somewhat patriotic fervor that surrounds anything from this country. However, the 2018 Bacchus from Chapel Down, courtesy of vines in Tenterden, Devon, surpassed my admittedly modest expectations. Fresh with grapefruit and hints of lychee on the nose, it was well defined and vigorous, developing a light marine note with aeration. The palate is well balanced with a fine line of acidity – nothing outrageously complex but with lip-smacking salinity that urges you back for another sip. I made a mental note to give the Bacchus variety more of a chance, to keep an open mind and all that. 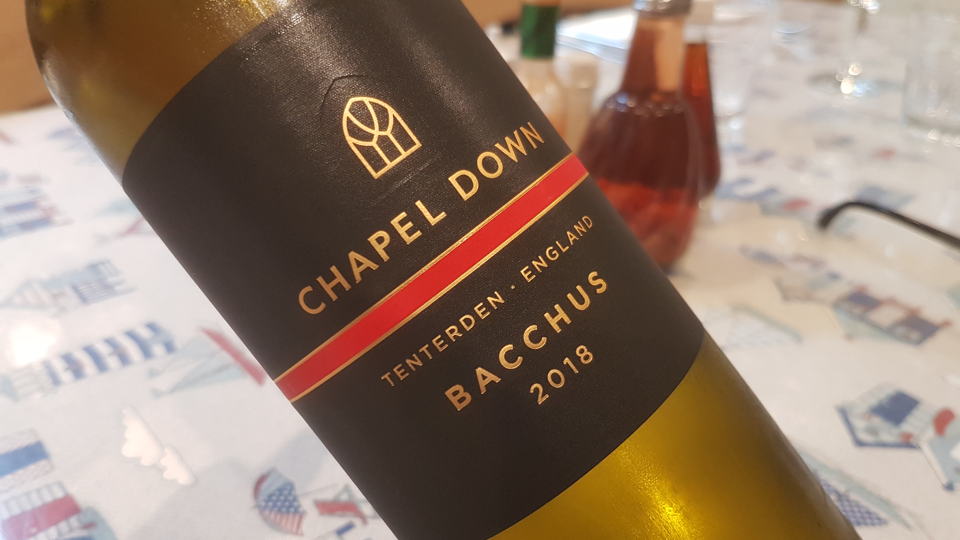 Is Wheelers worth the schlep down from London? Well, if you want outstanding seafood without paying a king’s ransom, then certainly. Train connections from Waterloo are pretty good and driving doesn’t take long. You can always move on to see Canterbury or up-and-coming Margate, then take a refreshing coastal walk afterward. Wheeler’s is an institution that has seen trends come and go. With the growing popularity of oysters, business seems to be thriving, even if it will never return to Victorian levels. The oysters met my expectations, and you know the best thing? I didn’t get food poisoning.