Although Turley Wine Cellars is best known for its remarkable ever-growing range of Zinfandels from mostly very old vines all over California, when it comes to older vintages it’s the Hayne Vineyard Petite Syrah that the winery’s long-time clients are most likely to have in their cellars. And judging from my recent comprehensive tasting of this singular wine, they won't be disappointed when they uncork these bottles: this wine has proved remarkably consistent over the years and the best vintages appear to be virtually ageless. 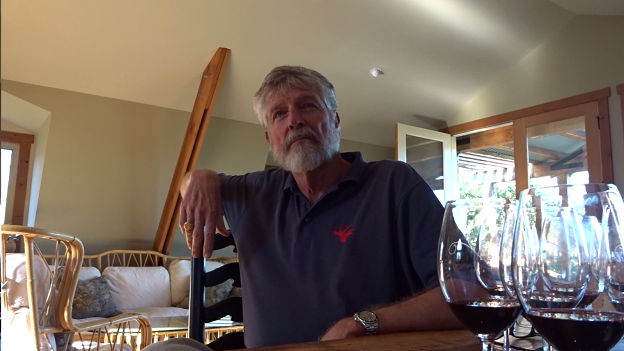 The vertical tasting was held in March with owner Larry Turley, daughter Christina Turley, who directs sales and marketing, and winemaker/viticulturalist Tegan Passalacqua in the Turleys’ Olive House at the family compound on Highway 29 north of St. Helena. And it was nothing short of a revelation. The fruit in most of these wines appears to be bulletproof. Ten-year-old bottles showed the color of barrel samples; most of the vintages from the ‘90s still looked like young wines. More important, the wines were evolving in a positive way, becoming more pliant and harmonious in bottle and gaining in complexity rather than simply enduring.

The key to the slow aging and longevity of Petite Sirah, according to winemaker Passalacqua, is its combination of lowish pHs and huge anthocyanin content. “In barrel as well as in bottle, the wines remain in a reductive state,” he told me. “They want to resist oxygen. It’s almost as if there’s a soft shell around them.” As the Hayne example boasts outstanding depth of fruit without hard tannins, it is usually accessible upon release. Our vertical tasting also suggested that extended aging brings greater sex appeal along with easier drinkability.

The Hayne Vineyard is planted on head-trained, dry-farmed vines on gravelly loam soil off Sulphur Springs Avenue on the west side of St. Helena, just south of the center of town. Vine spacing is 10 by 8 feet. The Zinfandel on this property dates back to 1903; the Petite Sirah was planted in 1953. Turley began offering both of these bottlings in his winery’s first vintage, 1993. 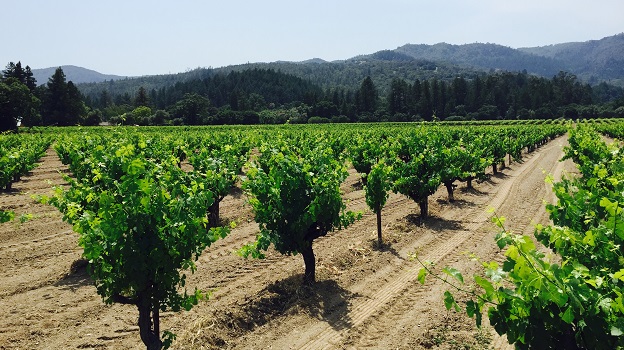 Hayne Vineyard, which winemaker Tegan Passalacqua considers to have the ideal conditions for Petit Sirah

“I had never had a Petite Sirah before we started making the Hayne,” Turley said at our tasting. “It was essentially a blending grape, an underdog, but I liked it for its size and explosive taste.” According to winemaker Passalacqua, a third-generation Napan who has in recent years been credited with discovering numerous obscure parcels of old vines with outstanding potential, Petite Sirah was the most widely planted variety in Napa Valley as recently as the 1970s. “The grape was very rarely bottled on its own, but the fruit had to be going somewhere. It’s pretty clear that a lot of old Cabernets and even Zinfandels were made with some Petite Sirah for fruit and backbone.” 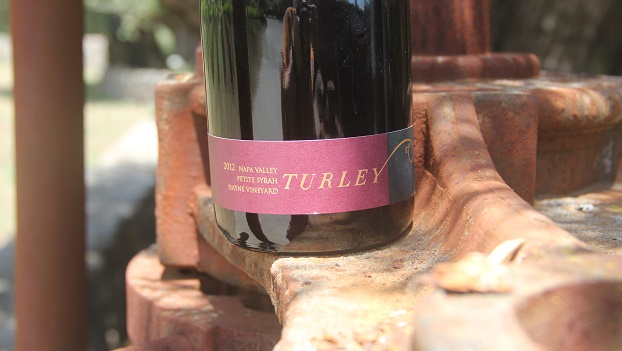 And Petite Sirah in the Hayne Vineyard turned out to be a special case. According to Passalacqua, “there’s no other vineyard in California where the variety planted is better suited to its site than Petite Sirah at Hayne.” He added: “It’s our easiest vineyard to work with. We thin the shoots but we don’t need to drop crop or remove leaves. The vines are totally self-regulating: they grow exactly how much fruit they need, and Petite Sirah is less vigorous than Zinfandel.” Yields for the Hayne Petit Sirah are very low, averaging barely two tons per acre since the turn of the new century.

Larry Turley’s sister Helen made the first three vintages here, then Ehren Jordan, who had previously worked in the Rhône Valley, took over winemaking responsibilities. Passalacqua begin as an assistant to Jordan in 2003 and took over as full-time winemaker “gradually,” in 2009 and 2010. Helen Turley originally used as much as 40% new oak to age the first vintages, but Jordan steadily reduced that percentage to about 20% by 2004, which is where it stands today. The winery has always used an 80/20 blend of French and American oak barrels, air-dried for three years.

While the evolution of winemaking here over the years has mostly been gradual, Passalacqua has significantly increased skin contact during fermentation from 20 days prior to 2009 to 40 to 45 days in the most recent vintages. Fermentation begins with a five-day cold soak, and Passalacqua practices a gentle extraction, relying on pumpovers rather than punchdowns. For the period of post-fermentation maceration the tank is pumped over for five minutes every other day to keep the cap from drying out.

The fermentation of the Hayne Petite Sirah normally goes easily, said Passalacqua, and, in contrast to Zinfandel, Petite Syrah is bone-dry when it’s pressed. “Certainly in the past 12 years there has been no vintage of the Hayne Petite Syrah with more than two grams per liter of residual sugar,” noted Passalacqua. The sweetness of these wines is from ripe fruit. Similarly, alcohol levels do not reach the extremes commonly hit by Zinfandel.

It’s important to know that the Hayne Petite Sirah is generally picked early, almost always within the first three weeks of September. “The wines reflect the style of their vintages,” noted Larry Turley, “but we don’t like to be painted with a Cabernet brush, because we don’t have the downside of having to deal with fall rains.” Turley converted to organic farming early on and noted that “with healthy soil you get earlier physiological ripening. So our wines are a little less brawny than they might otherwise be.” 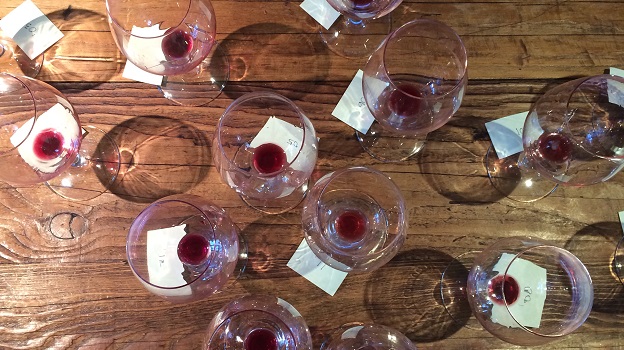 Only drops remained in the glasses after this tasting

Turley was thrilled by the way his 20 vintages of Hayne showed, but not totally surprised. “I tend to drink our Zinfandels younger than most people do, but that’s a matter of personal taste. The Petite Sirah just keeps getting better and better.” Incidentally, Turley has always spelled the grape “Petite Syrah” on his labels, a reference to Syrah being one of the parent grapes of Petite Sirah.

See all the wines (from oldest to youngest)