Few vineyards in California are as evocative as Monte Rosso. Known for producing wines of extraordinary character and longevity, Monte Rosso (‘red mountain’) is every bit as magical as its name suggests.

The first Monte Rosso wine I remember tasting was a Cabernet Sauvignon from Ed Sbragia about ten years ago. It was so distinctive, and so incredibly different from the Napa Valley Cabernets I was used to. That was my first real introduction to Sonoma Cabernet. I was immediately hooked. Later, I had the opportunity to taste many Martini wines from the 1950s and 1960s that told the story of a remarkable place. 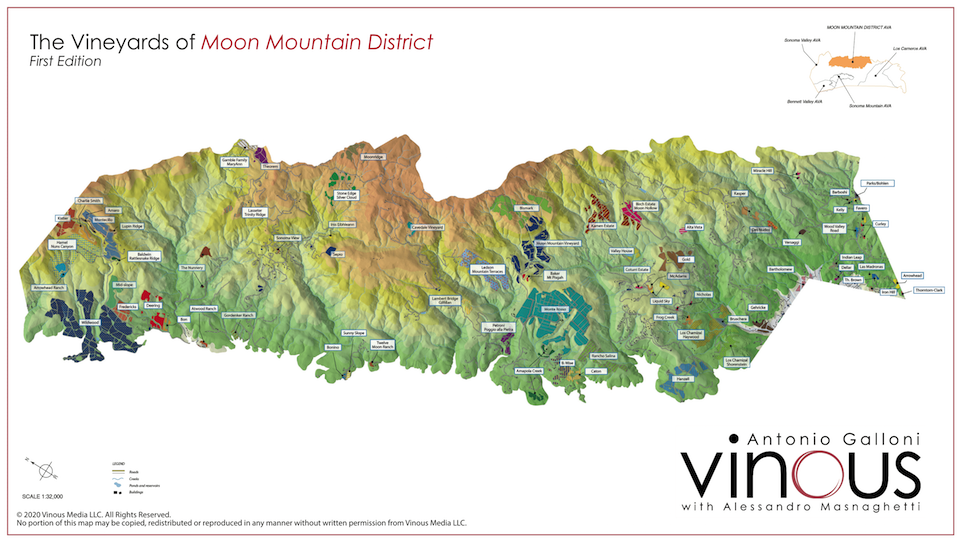 The Vinous Map of the Vineyards of Moon Mountain by Antonio Galloni and Alessandro Masnaghetti. © Vinous, 2020.

Monte Rosso is located in the Moon Mountain AVA, which itself is contained within the larger Sonoma Valley AVA that develops on the western side of the Mayacamas Mountains. For reference, Napa Valley’s Mt. Veeder AVA lies just on the other side of the Mayacamas Mountains. The entrance of the ranch sits at about 700 feet above sea level and then winds up to nearly 1,300 feet. On a clear day Monte Rosso provides stunning views of the San Pablo Bay and San Francisco. 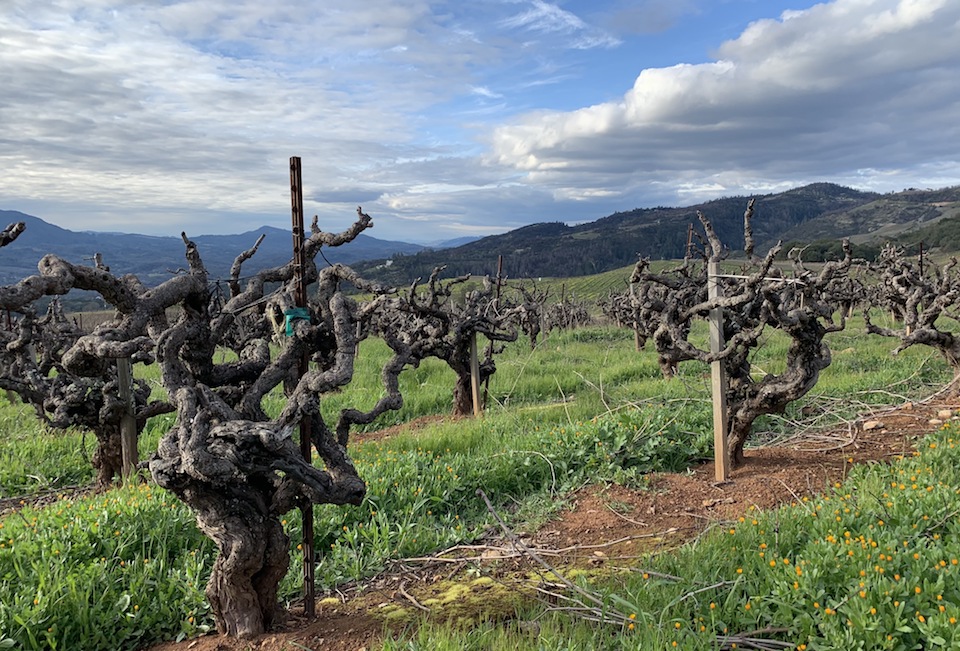 These head-trained Zinfandel vines date to the 1880s.

Emanuel Goldstein and Benjamin Dreyfus, partners in a grocery business in San Francisco, first developed the property in the late 1880s. They called their vineyard Mount Pisgah, although locals referred to it as the Goldstein Ranch. The first 75 acres of vineyards went into the ground in 1886. That same year work on a winery was completed. Even today, Monte Rosso remains an incredibly rugged site. It is nearly impossible to imagine how the land was developed given the tools and transportation that were available at the time. Louis Martini, a buyer of fruit, bought the ranch in 1938 and made numerous wines that still bear testament to the pedigree of the land. The Martini family sold their Louis M. Martini Winery and Monte Rosso to E. & J. Gallo Winery in 2002. 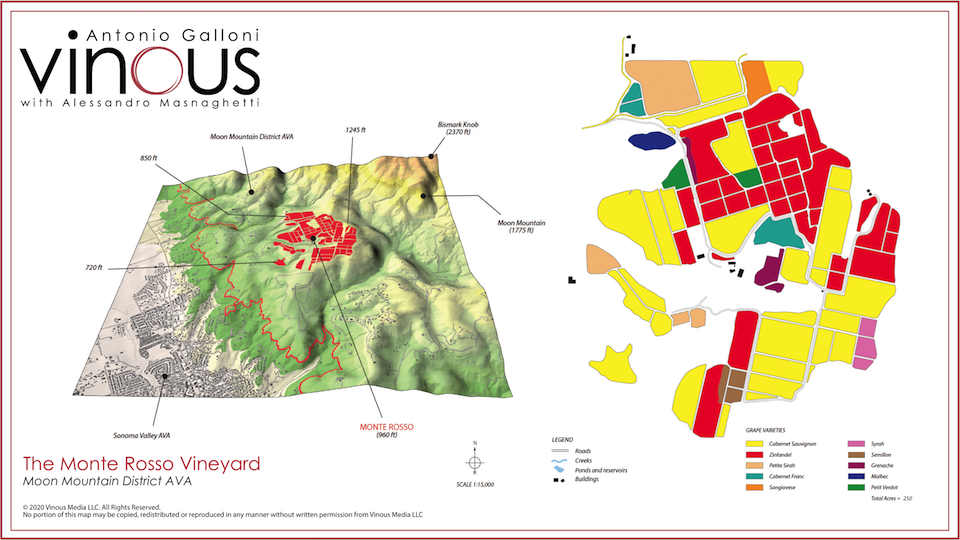 Monte Rosso in 3-D on the left and a block-by-block breakout by variety on the right. On the left, note the elevated plateaus within Monte Rosso.

Monte Rosso is steeped in history. These hillsides include what are believed to be the oldest Cabernet Sauvignon vines in California, planted in 1940 by Louis Martini. The Sémillon block, which is more accurately described as a Sémillon-based field blend with both white and red grapes including Palomino, Carignan, Lenoir and Sylvaner, still has vines that date back to the original planting in 1886, which makes them among the oldest surviving Sémillon vines anywhere in the world. At present, there are 250 acres under vine. In a typical year, harvest takes an incredible 9-10 weeks to complete. The top part of the ranch starts its vegetative cycle earliest, but harvest starts at the bottom of the ranch and then moves up towards the top.

Although Monte Rosso sits at elevation and is largely above the fog line, it is best described as a series of plateaus, with gently sloping hillsides and only a few spots that are truly steep. Soils are red hill clay loam formed by volcanic deposits from Mount St. George. The terrain gets progressively heavier and redder moving southwest, which is the general orientation of the site. 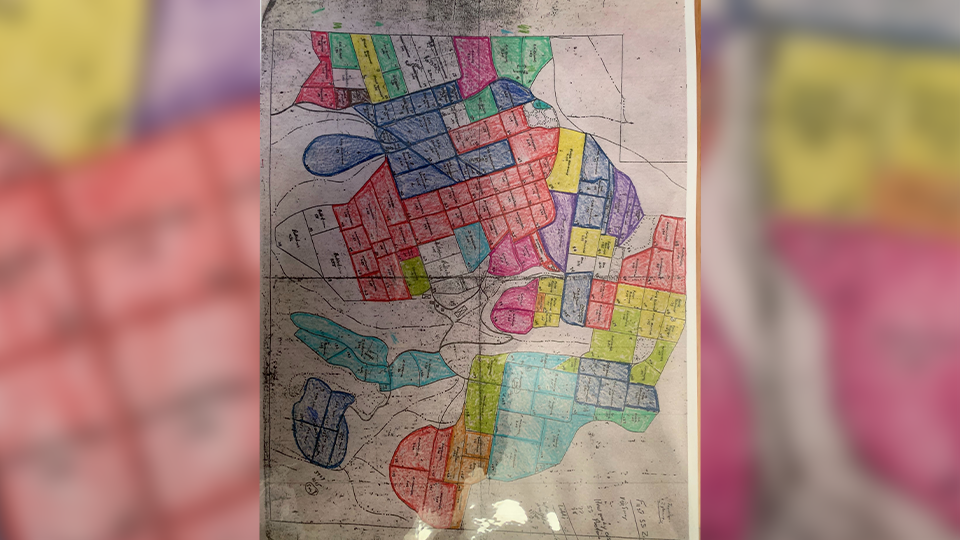 This hand-drawn map by Mike Martini shows varietal breakdown by block in 1976.

One of the most exciting recent developments at Monte Rosso has been the re-opening of fruit sales to outside wineries, an effort being led by Vineyard Manager Brenae Royal. When the Gallos acquired Monte Rosso in 2002 they gradually began to take back contracts of outside fruit sales for their own Louis M. Martini, Mount Peak, and, more recently, Orin Swift labels. That decision is certainly understandable. Who wouldn’t want to keep this fruit for themselves? At the same time, watching a number of talented producers lose access to Monte Rosso fruit and seeing wines disappear felt like a significant loss for the history of vineyards and wine culture in the United States. 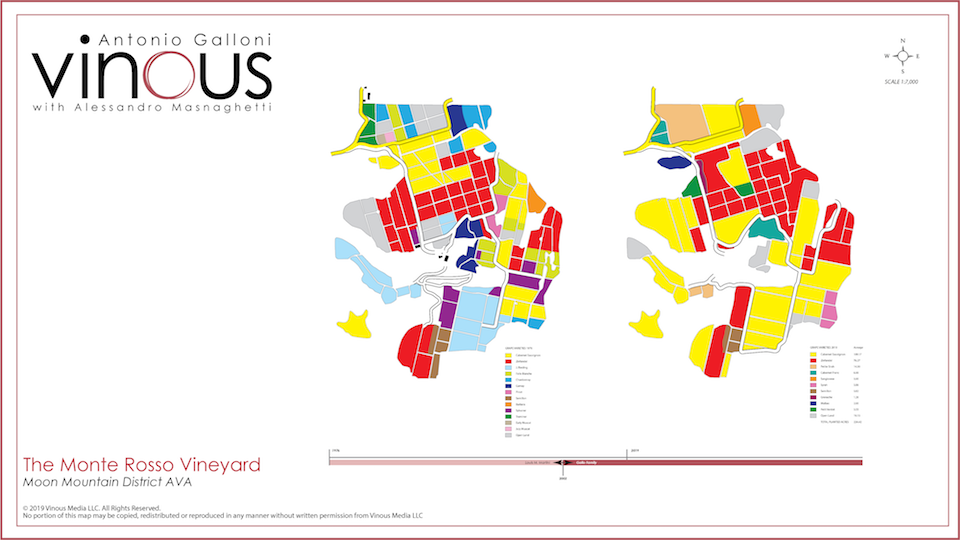 Alessandro Masnaghetti’s comparison of Monte Rosso in 1976 and 2019. Note the transition away from white grapes in favor of red grapes.

That changed earlier this year when Gallo began selling fruit to outside wineries once again. At present, 17 wineries purchase fruit from Monte Rosso. These include wineries such as Bedrock, Biale and Sbragia that have a track record of working with Monte Rosso fruit, and newer entrants, including Brown Estate, Gagnon-Kennedy, Limerick Lane, Turley, Mazzocco, Moscardini and Scribe. That roster is set to expand further in 2021. 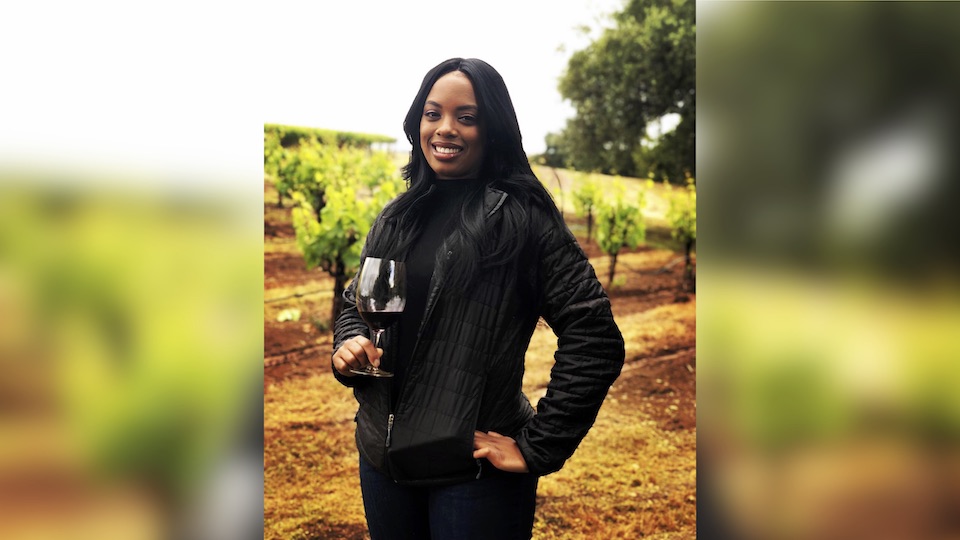 It looks like I will have a lot more Monte Rosso wines to review very soon. I am certainly not complaining.

View all Monte Rosso wines in the Vinous database.

Since 2015 we have been working on a large-scale project to map the vineyards of California. To date, we have published seven regional Napa Valley maps and have several more in the works, including a five-map set of Sonoma Valley and map of the Santa Lucia Highlands, both of which are nearly finished. Although travel restrictions related to COVID-19 have delayed final, on-the-ground checks that are such an essential part of the quality control process, we are eager to share our work and show you a little bit of what we have been up to through this series of excerpts. We will have much more on Vinous Maps in 2021.