Looking Back at Napa Valley Icons

It’s always a thrill to revisit some of Napa Valley’s reference points. This tasting/dinner at Press was full of highlights.

There is something magical about Cabernet Sauvignon. In particular, Cabernet has the ability to develop and transform with age in ways that are often unpredictable. That is one of the reasons it is so interesting to follow wines along their entire lives.  It was a real privilege to sit down with one of my tastings groups to check in on these iconic wines. We had a few disappointments, as always happens in settings like this, but for the most part, the wines were fabulous. I am not sure how we ended up with so many vintages of Mayacamas (aside from the fact I brought a few), but those wines in particular were absolutely brilliant. I would like to thank Press in St. Helena for hosting us, and Sommeliers Kelli White and Scott Brenner for their advice and insights. Our dinner was top-notch, but will all due respect to the kitchen, on this night the focus was a bit tilted towards the wine end of things. 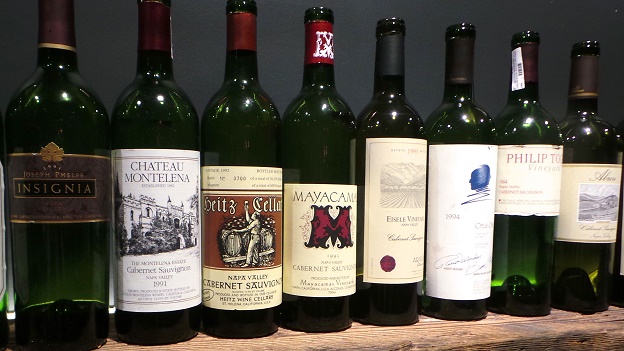 The 1981 Chalone Pinot Noir is absolutely gorgeous, even if it is also very slightly corked. At 33 years of age, the 1981 is beautifully expressive, perfumed and silky. Intensely floral, savory and aromatic, the 1981 has distinctly old-world inflections. What a shame this bottle is a bit less than perfect. 92/Drinking window: 2014-2019. A true rarity, the 1981 Zinfandel from Hacienda del Rio, Burt Williams and Ed Selyem's original label, is utterly impeccable. Cedar, tobacco, wild flowers, leather and dried stone fruits are all laced together in a silky, super-expressive wine. This, too, has aged far better than anyone probably thought it would 30 years ago. 90/Drinking window: 2014-2019.

I am less thrilled with our Inglenooks, none of which is particularly impressive or at the level of the other wines at the table, although that admittedly is a very high bar. Sadly, the 1966 Cabernet Sauvignon is oxidized. ? Now fully mature, the 1967 Cabernet Sauvignon fares better than the 1966. Cedar, smoke, tobacco and leather add nuance to the dark fruit. 88/Drinking window: 2014. A powerful yet eccentric brute, the 1968 Cabernet Sauvignon Cask H-12 is full of dark tonalities. Smoke, game, blood and molasses linger on the muscular but rustic finish. 88/Drinking window: 2014.

The 1969 Cabernet Sauvignon from Souverain is not perfectly clean, but it is nonetheless very intriguing. Red stone fruits, iron, smoke and a dose of brett all give the 1969 a decidedly Old World profile. Although a bit eccentric, the 1969 is intriguing for so many reasons, including its intensity and overall structure.  92/Drinking window: 2014-2019. Chateau Montelena’s 1973 Cabernet Sauvignon Sonoma County is a real oddity. Not to be confused with the more famous 1973 Napa Valley Cabernet Sauvignon, the Sonoma County is a different wine, but very much compelling in its own right. Still remarkably fresh and beautifully layered in the glass, the 1973 impresses for its brightness and purity. Sweet red berries, crushed flowers and savory herbs add naunce on the sculpted finish. What a revelation this is. 94/Drinking window: 2014-2023.

What a thrill it is to drink Montelena’s 1991 Cabernet Sauvignon, a wine that takes hold of all the sense and never lets up. Imposing and intense, the 1991 is simply riveting. The flavors are dark, intense and savory, but it is the wine’s silkiness that stands out above all else. Well-stored bottles will continue to drink beautifully for another decade-plus. 97/Drinking window: 2014-2024. The 1991 Insignia is just as impressive as the Montelena. A rich, decadent, voluptuous wine, the 1991 is a phenomenal Insignia. Dark red and blue fruits, mocha and spices are some of the notes that flesh out in this modern-day classic from Phelps. This is such a great example of the more fruit-driven, ripe style in Napa Valley at its best. Even with all of the intensity, all the elements are in the right place. 98/Drinking window: 2014-2024. There are bound do be a few duds in a tasting like this one. Sadly, the 1991 Stags’ Leap Wine Cellars Cask 23 is completely maderized. NR. We have better luck with the 1992 Heitz Cabernet Sauvignon Martha’s Vineyard, which is stellar. The flavors are warm, soft and resonant in a supple, super-expressive Cabernet that is peaking yet shows no signs of fading. Sweet floral, mint and spice notes flesh out in the glass, but the 1992 is first and foremost a wine of texture. The pliant, sexy finish makes the 1992 absolutely irresistible. 94/Drinking window: 2014-2024. 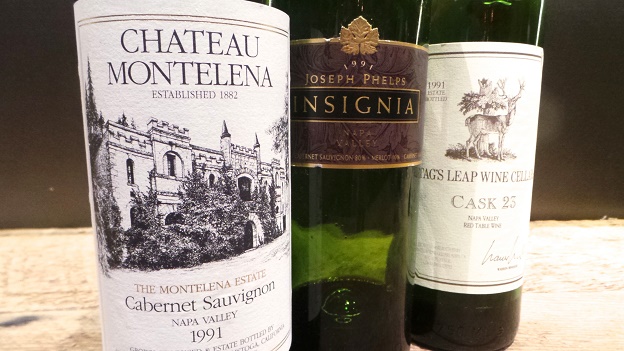 David Abreu’s 1994 Cabernet Sauvignon Madrona Ranch is a dark, exotic beauty. Mocha, espresso, plums, black cherries and incense meld together in a rich yet quintessentially mid-weight Cabernet Sauvignon. The 1994 was made by Ric Forman, but the style is a bit forced. There is little question Abreu (under the direction of Brad Grimes) and Forman are both making better and more convincing wines today. 92/Drinking window: 2014-2020. What a pleasure it is to taste and drink the 1994 Opus One. Far better than a bottle I had last year, this bottle is absolutely terrific.  Voluptuous, sexy and layered to the core, the 1994 races across the palate with superb depth and pure class. 96/Drinking window: 2014-2024. Togni’s 1994 Cabernet Sauvignon really should have had more air. Tonight, it is striking, but I have also tasted better examples than this. Savory herbs, tobacco, incense and black fruit gradually open up in the glass. This is a gorgeous wine, but the best examples have a level of visceral thrill that is missing. 95/Drinking window: 2014-2029. 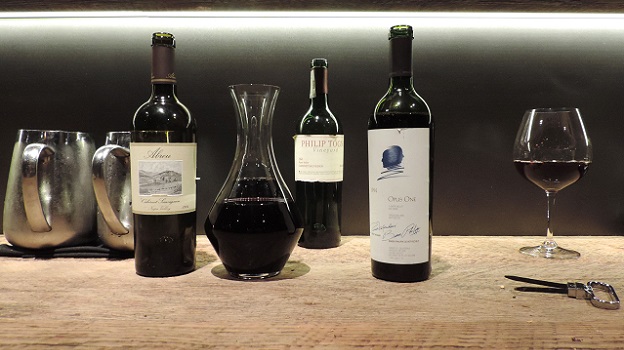 A real head-turner, the 1984 Cabernet Sauvignon from Mayacamas is simply magnificent. Even at thirty years of age, the 1984 is a youngster, with enough depth, structure and intensity to drink well for another 10-20 years. Iron, sage and leather are some of the notes that gradually open up in the glass. The simply, inescapable fact is that the 1984 is going to need more time in bottle before it delivers the kind of drinking experience that is typical of the 1970s wines today, which I suppose makes all the sense in the world. 96/Drinking window: 2014-2030. The 1985 Cabernet Sauvignon is all about silkiness and grace. Although not one of the eternal wines at Mayacamas, the 1985 is a great choice for drinking now. Today, the 1985 is sensual, perfumed and light on its feet. 95/Drinking window: 2014-2024. 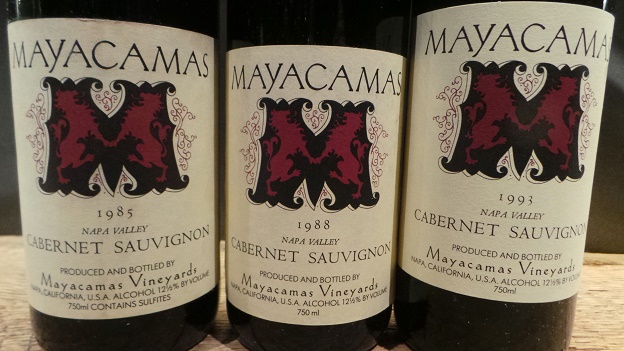 The 1988 Cabernet Sauvignon is insanely beautiful tonight, and very, very young. Firm tannins give the 1988 its spine and sense of proportion. Layers of dark, savory-infused fruit fill out the wine’s frame in an epic Cabernet that will drink well for another 20+ years. 97/Drinking window: 2014-2034. Dark red cherry, plum, spice and mint are some of the many notes that are woven together in the 1993 Cabernet Sauvignon. The 1993 is creamy, radiant and expressive, with plenty to offer today and over the next 15 years or so. Sweet floral and spiced aromatics add silkiness to the expressive finish. Overall, the 1993 comes across as a wine with 20-30 years of potential, which is to say it’s and early drinker. 96/Drinking window: 2014-2024. 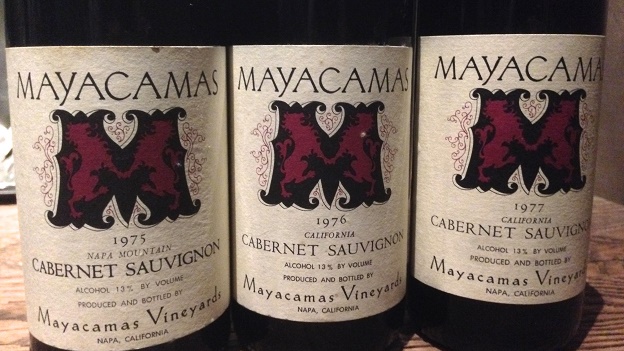 The 1977 Mayacamas Cabernet Sauvignon offers notable depth and power, but it is also quite forward. Black fruit, smoke and game gradually open up in the glass, but something is missing. Sadly, this is not a great bottle. 91/Drinking window: 2014. Things get back on track with the epic 1976 Cabernet Sauvignon. A huge, structured wine, the 1976 blasts across the palate with massive dark fruit followed by more ferrous notes that recall iron, smoke, tobacco and cedar. This is old-school Napa Valley mountain Cabernet  - if I can say that – at its best. 97/Drinking window: 2014-2024.  Another breathtaking wine, the 1975 Cabernet Sauvignon is all about texture and structure. Remarkably fresh for a wine of its age, the 1975 is pure magic in the glass. The flavors are dark, rich and authoritative. Like the 1976, the 1975 will continue to thrill those lucky enough to own it for another decade, perhaps longer. 96/Drinking window: 2014-2024.

The evening ends with another true rare bird. What a treat it is to taste and drink Araujo’s 1995 Cabernet Sauvignon Eisele Vineyard Vieilles Vignes. A wine of seamless texture and balance, the 1995 captivates all the senses with its exhilarating purity and total finesse. The flavors are bright, nuanced and layered in a wine that is peaking today but still has another decade-plus of fabulous drinking ahead of it. Araujo has long stood for a contemporary sense of classicism, and that is exactly what comes through here.

First produced in 1991, the Vieilles Vignes was made from Block 3, the estate’s oldest vines of head-trained Eisele clone Cabernet Sauvignon planted in 1964 on St. George rootstock. Block 3 was the source of the 1971 Ridge, 1964 Conn Creek and 1975 Joseph Phelps Eisele Cabernets, all iconic, benchmark wines for the property and Napa Valley. Araujo made just one barrel of the Vieilles Vignes each year until 1998, when the vines finally succumbed to leaf roll virus. At the time, the rest of the fruit off Block 3 went into the Estate Cabernet Sauvignon bottling. The Vieilles Vignes was always 100% Cabernet Sauvignon and was not released commercially, but mostly given as gifts. Readers fortunate enough to own the 1995 are in for a real treat. What a spectacular Cabernet Sauvignon this is. Winemaker Françoise Peschon did a phenomenal job with the 1995 VV in just her third harvest at Araujo. 98/Drinking window: 2014-2025.