Colombo Calistri and his family run a little jewel housed in Palazzo Riario in Caprarola, which is just 40 minutes north of Rome and is considered by many to be one of Italy’s prettiest, best-kept small towns. A long-time feudal holding of the powerful Farnese family (Alessandro III was a famous pope), the small town boasts noteworthy architecture. Many of its buildings (the most famous of which is Palazzo Farnese) were designed by Jacopo Barozzi (1507-1573), better known as Il Vignola, an extremely famous and talented 16th-century architect – so famous and so talented that after Michelangelo’s death in 1564, Barozzi was named chief architect of St. Peter’s Basilica in the Vatican. 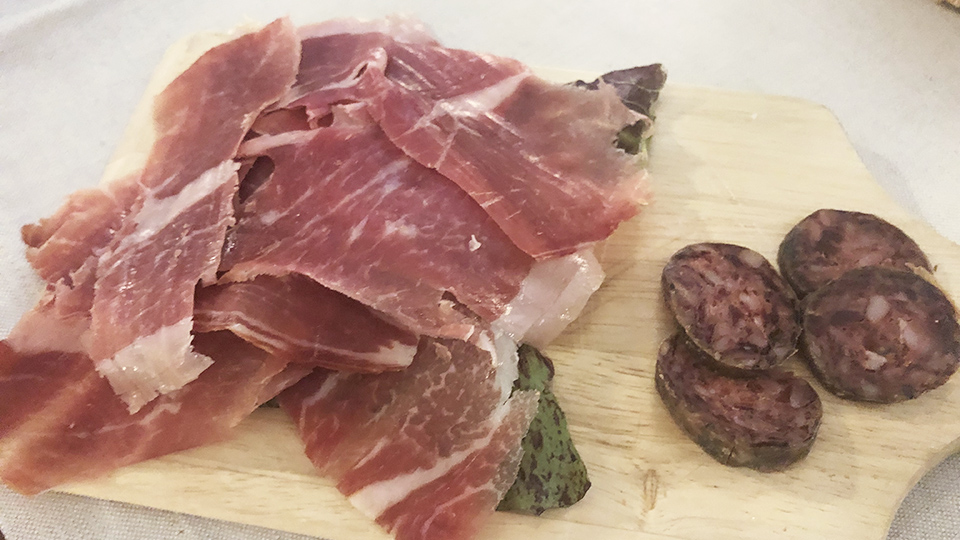 After an appetite-inducing stroll around the pretty hamlet (especially the climbing main road that cuts the town in two and takes you right past the beautiful Palazzo Farnese), there’s nothing better than dropping in for lunch at the Trattoria del Cimino. It’s now four generations and counting in this spacious, simply appointed but refined restaurant, where the third generation, represented by Colombo Calistri and his wife, Maria Assunta Stacchiotti, hold down the fort while their son Samuele Calistri learns the ropes in some of Europe’s most important hotels and restaurants. After stints at the award-winning Four Seasons Geneva Il Lago restaurant and the Waldhotel Sonnora in Dreis, Germany, Samuele is now working as export and sales manager at the outstanding Clemens Busch winery in the Mosel. Samuele’s girlfriend Sara, an architect by trade, oversees the interior design and layout of the trattoria. 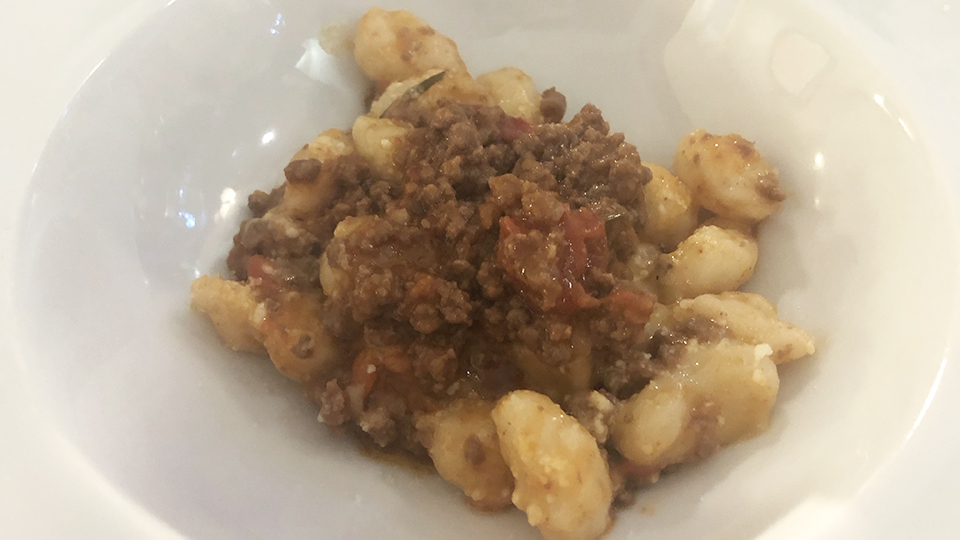 The restaurant is a treasure trove of locally sourced, high-quality ingredients and wines (there are over 150 different labels on the wine list, with a steadily increasing presence of foreign wines too). However, it’s the food that is especially memorable at Trattoria del Cimino, with the talented Maria Assunta behind the stove. Sitting down and talking with her reveals a keen mind, attention to detail and an interest in different cooking trends and cultures. I recently spent a long Sunday lunch there that was easily one of the best, most affordable lunches I had in all of 2018. 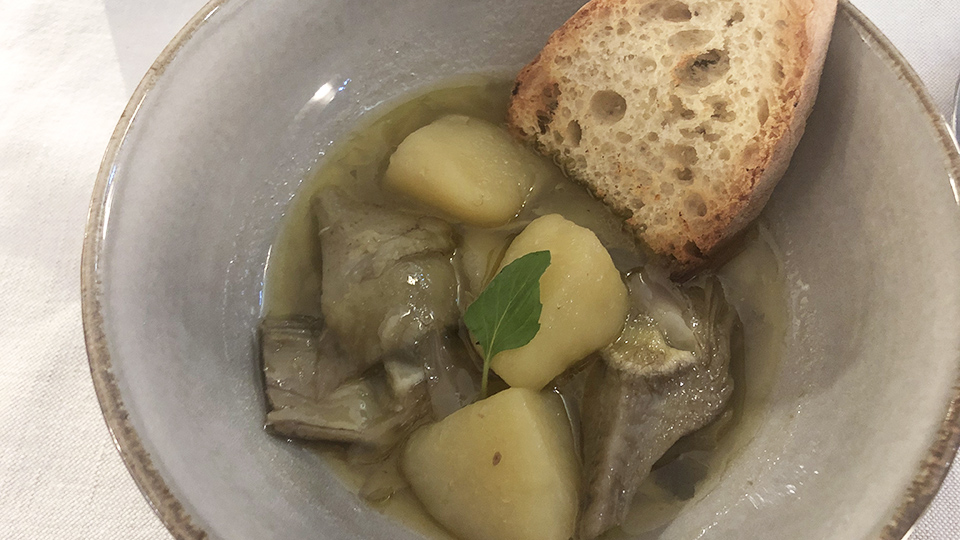 I kicked things off in style with two salumi that are hard to find and extremely good, the susianella and the prosciutto crudo dei papi, aged for 24 months and made from local Viterbo hog breeds. Susianella is a horseshoe-shaped Lazio salume that was famous from the 11th to the 15th centuries, but is now rarely seen; there are only a few artisanal producers left. It’s very flavorful but may not be everyone’s cup of tea; in fact, it’s made with innards (typically heart, pancreas, and liver, but also more “palatable” pieces of pork meat - at least, more palatable for most people - such as guanciale and bacon). The potato and artichoke dish is a perfect example of what Trattoria del Cimino does so well. The pici all’amatriciana are simply a standout dish, perfectly textured and served in a rich, flavorful sauce. I devoured them so fast that I had to take care not to eat the plate along with them! By contrast, the gnocchi were less assertive in their flavor profile, but beautifully balanced and delicate; it’s the gnocchi themselves that are light (more so than most you will eat), for they are made not with potatoes but with flour only. The gnocchi’s boar sauce is enriched by the pristine flavor of local, organically grown tomatoes. But the best meat dish at Trattoria del Cimino is always the one that features rabbit, a food staple that any self-respecting denizen of Rome simply can’t get enough of. Perfectly cooked, flavorful, and moist (like most white meats, it’s easy to overcook rabbit and have it turn dry and pasty), it was paired with bellflower roots. The European bellflower (Campanula rapunculus, commonly called rampion in the US) is rarely seen in restaurants nowadays, and that’s a shame, for it grows wild in the Lazio countryside. It has very pretty bluish flowers shaped just like bells, and its large bulbous roots, which resemble turnips, are especially flavorful and can be eaten braised just like broccoli, chard, or spinach. 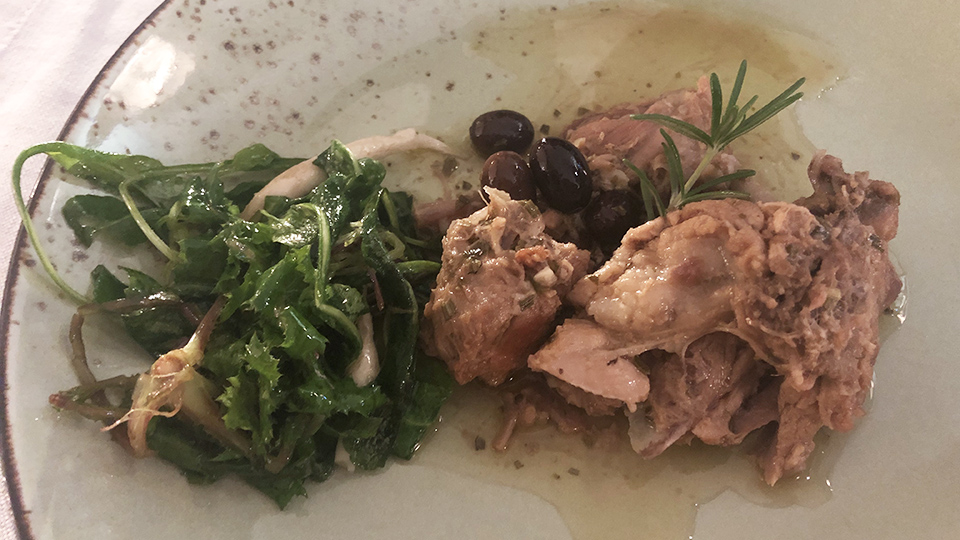 I finished off a truly satisfying, hearty and flavorful meal with the Trattoria’s mythical tozzetti di Giuditta, made following a special, secret recipe invented by Samuele’s great-grandmother Giuditta. These cookies are much more complex and flavorful than regular tozzetti and cantucci. (For precision’s sake, cantucci are of Tuscan origin, and they are almond-based and very hard in texture, which is why the custom developed of dipping them in Vin Santo; tozzetti are more typical of Umbria and Lazio, and are hazelnut-based, with a greater variety of ingredients, such as chocolate chunks, raisins, and pine nuts.) 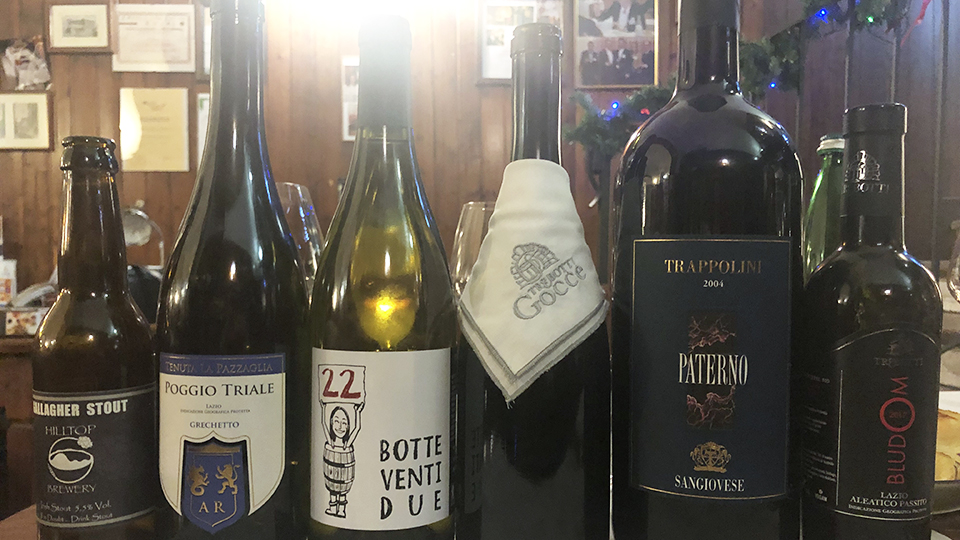 The wine list at Trattoria del Cimino gives visitors to the area a chance to delve deep into local vinous offerings – which is exactly what I did. The 2017 Tenuta La Pazzaglia Grechetto is clearly the product of a warm year, but the wine retains enough acidity to nicely counterpoint Grechetto’s usual hefty and slightly tannic mouthfeel. All in all, a lovely white that will stand up to white meat dishes too. I’ve been writing for almost 20 years now about the truly bewildering talent of the dynamic duo of Damiano Ciolli and Letizia Rocchi. I am in fact one of the first two wine tasters to have written about their estate, as Ciolli himself is kind enough to recognize. This latest brand-new wine from them only reinforces my point. The 2016 Damiano Ciolli Lazio Bianco Botte 22 is the couple’s first-ever white wine, and it has the genes of true greatness about it. A blend of old-vine Trebbiano Verde (Verdicchio) and Ottonese, it is aged in small oak barrels and still needs to shed its youthful oaky veneer, but there’s a lot of old-vine fruit lurking beneath. (The new vintage resting in the estate’s cellar is even more promising.) Tre Botti is a high-quality estate of the Lake Bolsena area in northern Lazio, best known for outstanding Aleatico wines. Their 2013 Trebotti Violone Lazio Gocce di Castiglionero is a good example of what the Violone biotype of the Montepulciano cultivar (Montepulciano is mostly associated with the Marche and especially Abruzzo) gives in northern Lazio; big, fleshy and mouth-coating, it is loaded with ripe blue and ripe red fruit aromas and flavors that make for a very hearty if not especially refined quaff. Only the less-than-stellar 2014 vintage, rainy and not especially sunny or warm, presents a slightly less rich but still very drinkable version of this wine. An interesting take on how well Lazio Sangiovese can age is demonstrated by the 2004 Trappolini Sangiovese Lazio Paterno; not the last word in refinement, it offers juicy and hearty tobacco, underbrush, licorice and red fruit aromas and flavors, along with good mouth-cleansing acidity. Last but not least, the 2011 Trebotti Aleatico Lazio Passito Bludom confirms that Aleatico is what this estate does best; after all, Trebotti is known to be one of the two or three best producers of Aleatico wines in Lazio. (Ludovico Botti devoted his enology school thesis to the variety and is one of Italy’s greatest experts on Aleatico.) Rich, dense and fleshy, this sweet red wine rivals black Muscat wines in fragrance and Recioto della Valpolicella wines in size and texture. All in all, always the Trebotti estate’s best wine each vintage and a perfect close to a memorable meal.