Freshly shot grouse without trimmings with elderberries and game sauce 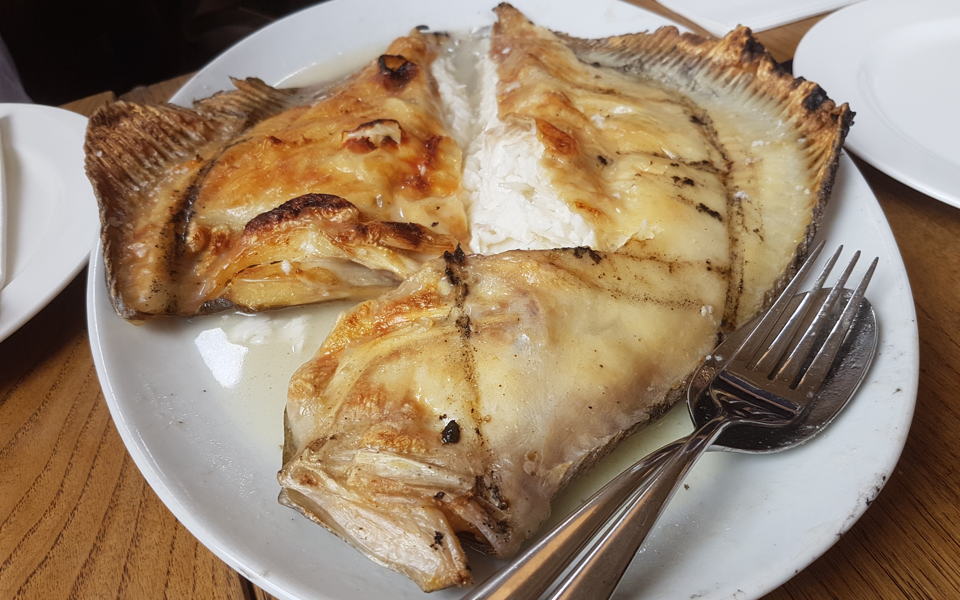 The turbot is splayed naked before me.

You know what it is saying?

Fornicating with a dead fish on a Friday afternoon may not go down well with the clientele in this packed and lively restaurant though, I must admit...it is difficult to resist. The turbot glistens, brilliant pearly white inside and its skin, a roiling sea of singed tan and brown. I drool with anticipation. When Brat first opened in April, this extraordinary turbot seemed to trend on social media and, like most people, my immediate reaction was that I have to eat that right now. Sourced from Cornwall, cooked in the mouth of a lumpwood charcoal oven to “max the meatiness,” its oozing juices whipped and lacquered to create an emulsion, the turbot will inevitably become a dish that misty-eyed epicures will regale in years to come, just like Marco Pierre White’s oyster tagliatelle, Pierre Kaufmann’s pig’s trotter and Colonel Sanders’ original recipe chicken. 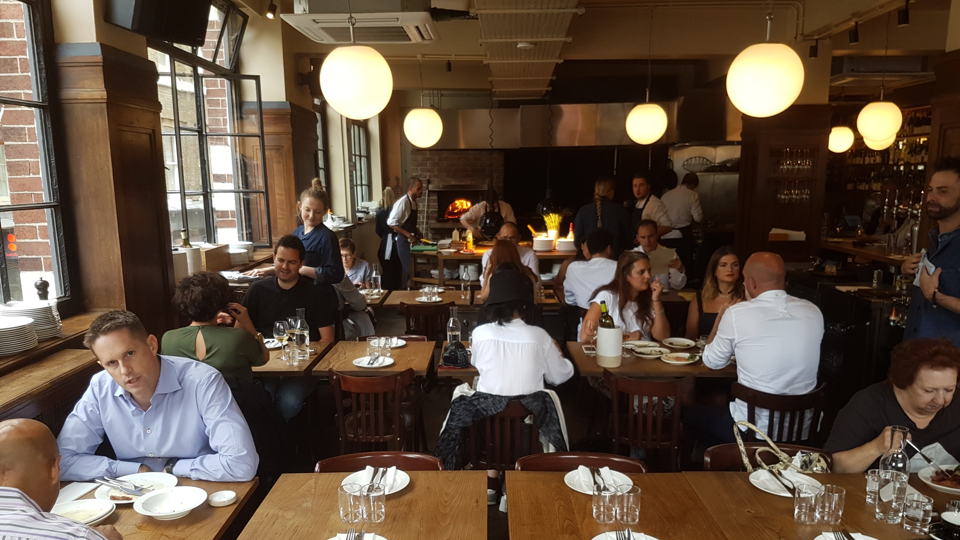 Our waiter guides us through the various parts of the fish. With the turbot already relieved of its spine, the waiter indicates the tender and meaty sections and makes sure we don’t miss the delicacy that is the turbot cheek. I would like to assure readers that I choose not to dim the lights and put Barry White on the stereo. I just begin loosening the moist white flesh from the bone to devour every morsel. Turbot is a fish surfeit with umami. It is not just the purity of flavour, but also the texture of the slightly caramelized skin that sends my sixth sense into overdrive. It reminds me of the best fish restaurant that I have ever visited – D’Berto in Galicia – and so perhaps, unsurprisingly, I later discover that wünderchef Tomos Parry was influenced by eating out in that part of northern Spain. 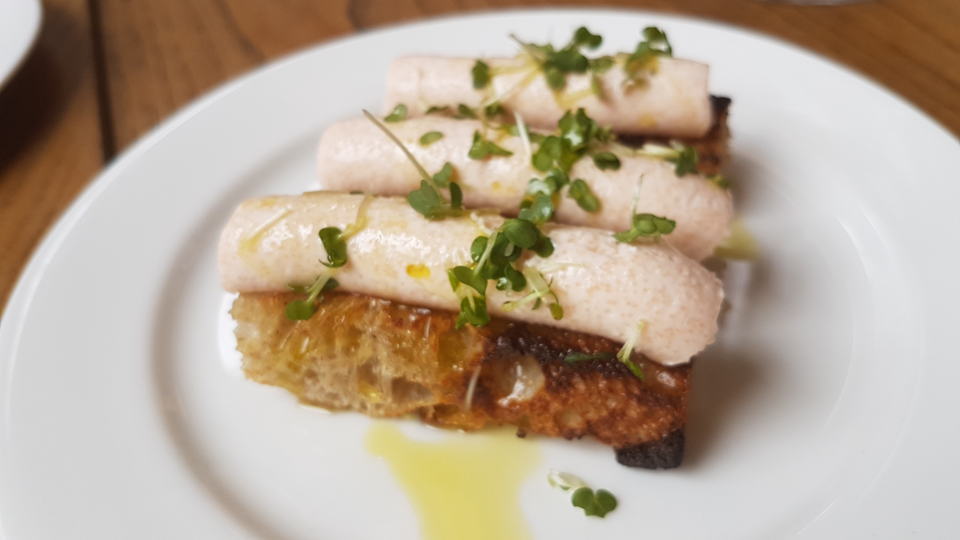 It sounds provocative, and very “hipster Shoreditch” to name a restaurant “Brat.” Rather than being inspired by a naughty school-kid, the name actually refers to an old colloquial English term for turbot. Brat exemplifies everything a restaurant should aspire towards in 2018. It is no wonder that the following day I find Tomos Parry splashed over the weekend supplements, with Brat declared as the hottest ticket in town. The restaurant is actually located around the block from another “cool” restaurant, Lyle’s, up on the first floor in a former East End strip joint. In fact, encircling our table I could make out the marking of where the stage once stood. The décor makes the interior feel intimate and social, with darker hues than many other recent openings, and simply furnished – rustic and shot through with a cool East End vibe. Though new, Brat feels “lived in”, as if it has been around for a few years. It takes the concept of an open kitchen one step further so that the room is occupied by diners’ tables and in the corner, a large, thick wooden chopping table where aproned chefs busily prepare the food. There is no barrier. Waltz over and take a look. Behind the chefs are the two aforementioned lumpwood charcoal fires, enhancing the feeling of food delivered straight from the oven to your table, almost like an English take on Japanese teppanyaki. 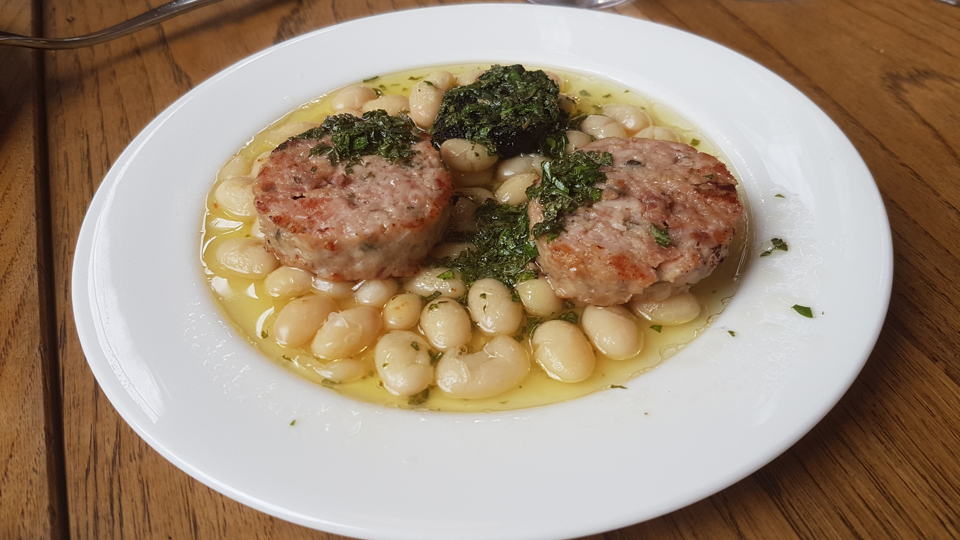 Medallions of wild rabbit with blood sausage and beans

The occasion is an annual lunch with Mr. Birchley and Lord Bruce. There is no reason for us to meet apart from friendship, chewing the fat, demolishing amazing food and sharing serious vino. Trust me, Lord Bruce always turns up with impeccably stored and very serious fermented grape juice. We commence with several shared starters. All of them are outstanding although, perhaps, we feel the cod roe mixed with taramasalata is slightly overpowered by the finger of grilled toast underneath. The chopped egg salad with bottarga is extraordinary, even though Lord Bruce remarks that he would have preferred it for breakfast than lunch. Fair point. I adore the medallion of minced rabbit served with blood sausage and beans, the ingredients clearly perfectly sauced and oozing with flavour.

Do you know the most amazing thing about this lunch?

The turbot is one of my culinary highlights of the year.

But it is not the highlight of this lunch.

The British Isles has few culinary specialties it can really call its own; grouse is one of them when 12th August comes around

No, that belongs to the grouse. We negotiate a special dispensation, henceforth to be known as “forkage”, whereby we could B.Y.O.G. or “Bring Your Own Grouse”. These are no ordinary grouse. These birds have been shot by no less than Brett Graham, head chef at the fêted Ledbury restaurant, also a keen game hunter when “the glorious twelfth” comes around. Grouse is difficult to source this season and the numbers are so small that I hear of several annual shoots being cancelled. “It is the worst year I can remember so far, in terms of numbers, due to the long winter, ticks and the dry summer, plus [moorland] fires in some areas,” Graham later tells me. Well, they might be thin on the ground, but these birds are amongst the best grouse I have eaten, partly since they are prepared without all the trimmings that can rather obfuscate the meat. It is also because they are perfectly seasoned with game sauce and elderberries, and perfectly partnered with juicy rosemary-flavoured potatoes. It is impossible to convey the deliciousness of this combination, so I will resort to the trusty old score system. 100-points. It would be easy to overlook the straightforward pudding, but my God, the burnt strawberry ice cream is sensational. Being burnt lends it welcome piquancy, while the strawberry flavour is perfectly judged – not too strong, but certainly palpable.

The wines are befitting such an epic lunch. We negotiate corkage as well as forkage, but I do recommend the list itself, provided by Noble Rot’s Dan and Mark (see Antonio’s Vinous Table for their restaurant review). We start with the 2016 Saint-Aubin Cuvée Marguerite from Pierre-Yves Colin-Morey, a multi-vineyard blend after frost devastated his vines. This is delicious, quite aromatic on the nose with hints of wild honey, almost like a 2015, touches of peaches and cream after 20 minutes aeration. The palate is harmonious and generous with a fine bead of acidity, hints of almond and traces of vanilla on the finish. There is nothing cerebral here, but it is very delicious. Next up is the 1989 Chasse-Spleen, my favourite estate in Moulis. This is my own contribution, prompted when I recently raved about the 1990 and a forum post mentioned that the previous vintage was even better. That is a very valid claim. The 1989 Chasse-Spleen offers chestnut and black truffle on the nose, with a touch of dried blood, comfortably reveling in its secondary aromas. The palate is wonderfully balanced, the dusty black fruit laced with cedar and charcoal, a hint of soy on the “old school” finish. The 1989 has held up wonderfully and, though maybe not quite as charming or as voluminous as the 1990, it is not far off. The other Bordeaux is a vexing 1986 Ducru Beaucaillou. Now, this bottle originates from the period when roof taint affected many bottles, but not all of them. Apparently, the château has a machine that can check to see if there is a taint in the remaining bottles or not. If so, the bottle is released. However, I have reservations about this example. I have drunk the 1986 several times and this feels expunged of Ducru personality or Saint-Julien character. The nose is pastille-like but missing real character. There is nothing faulty, and yet on the palate the wine comes across as excessively fleshy and without the backbone I expect from a 1986, rather sterile and flat. None of us finish our glass. 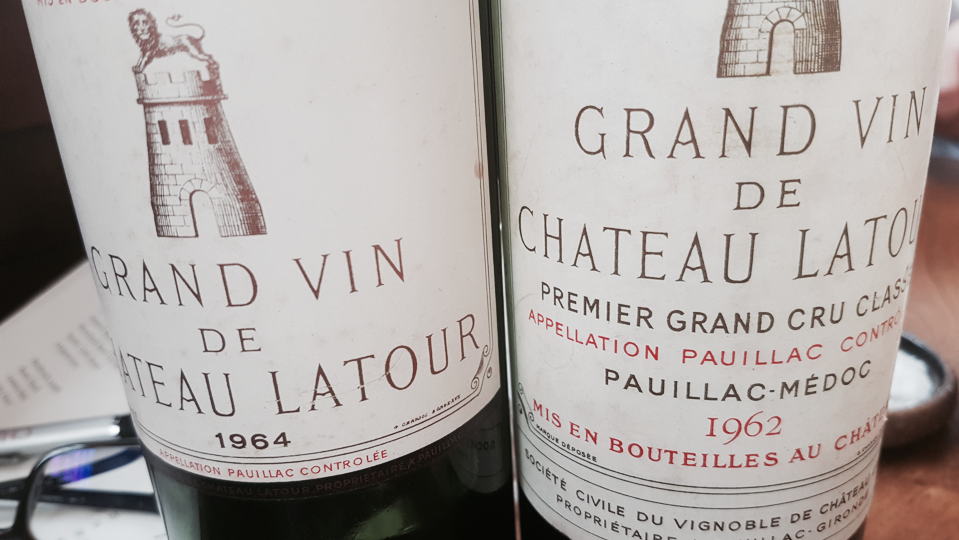 The last pair is served blind by Lord Bruce from his personal cellar. Clearly, the wines are pulled from the top drawer, Mr. Birchley correctly identifying Latour and not far off in terms of the vintages. They are fascinating to compare. Initially it is the 1962 Latour that races ahead. This bottle has never been moved since first released. Quite opulent and ravishing for the vintage, it blossoms quicker than the bottle that I tasted last year, those trademark graphite notes almost immediately replaced by more exotic hints of kirsch and quince that I normally associate with white wines. I also notice a hint of morels with continued aeration. The palate is beautifully balanced, with perfect acidity, plenty of black fruit after 56 years, allspice and hints of dried blood, almost Right Bank in style. Perhaps unlike the previous bottle, it does not step up a gear with aeration but cruises along at high altitude. The 1962 remains a marvellous Latour that will offer many more years of drinking pleasure subject to provenance. The 1964 Latour initially feels a little overawed by the openness and opulence of the 1962, a tad reserved and bashful on the nose, the palate missing the same depth and complexity. However, observing the wine over two hours, it simply blossoms in the glass, revealing beguiling autumn leaves, aniseed and cigar box scents on the exquisitely defined nose. The palate is medium-bodied, with fine tannin, cedar and graphite infusing the black fruit with a classic, regal finish that leaves me in awe. I mention in my previous tasting note that the 1964 can be startling. This is one of the finest examples that I have met. Just do not be afraid to give a 30 minute decant. 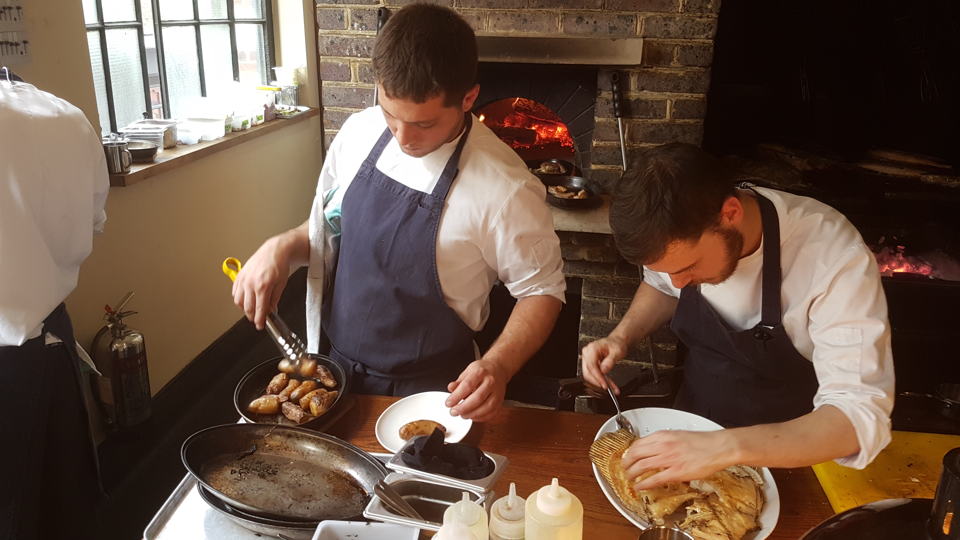 Brat is a paradigm of where the London restaurant scene is at in 2018. There is certainly a tangible drift of people, especially the under-30s, away from Michelin-starred restaurants in the capital. They do not hanker for the frills demanded to gain stars, the mannerisms expected from staff, or that the tablecloths are freshly pressed and ironed. They just want great food served unpretentiously, without all the rituals and etiquette. They want to see regular diners that they recognize, not tourists therejust to take photographs (like me). They want “kitchens” not “restaurants” where they feel a kinship with the staff, preferably around similar age, without stoicism, pretentiousness or supercilious demeanor. Apart from Tomos Parry later declaring that the 1962 was “passed it” on Instagram, prompting a swift response from your truly, Brat has a big fat tick against everything I seek in a restaurant. The grouse season will pass. But my God, I am already dreaming of when that whole turbot is placed before me again.