Ann Colgin established Colgin Cellars in 1992 and then in 1998 purchased a 125-acre high-altitude estate on volcanic soil in the Pritchard Hill area overlooking Lake Hennessey. She and her husband Joe Wender named their property IX Estate because it was parcel #9 when previously owned by the Long Family and because Ann married Joe on September 9 (9/9). In 2000, they planted 20 acres of vines on IX Estate and in 2002 they completed their winery there and vinified their first harvest—not just the IX Red Wine (a blend of Cabernet Sauvignon, Merlot, Cabernet Franc and Petit Verdot) but a 100% Syrah that was stunningly rich and complex from the get-go. Subsequent vintages have only proven the site’s greatness for Syrah. 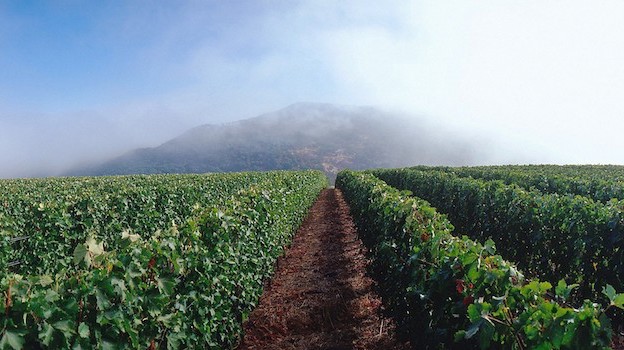 Planting Syrah Was a Risk

At a comprehensive vertical tasting of the IX Estate Syrah at the property in March, Colgin told me that she and her husband had long enjoyed the wines of the northern Rhône Valley and that she had never intended to plant her Pritchard Hill property entirely to Cabernet Sauvignon. But planting four acres of Syrah was a risk at the time. “The Syrah project was really our own idea. Most of our friends, as well as our vineyard manager David Abreu, thought we were crazy,” she said, noting that she worked with clones that originated in Côte-Rôtie and Hermitage, as well as an Entav clone that contributes bright berry and floral notes to the earth, meat and savory spices brought by the northern Rhône plant material. The idea proved to be a sound one, and all four parcels planted were used to make the IX Estate Syrah from the beginning, although one block was ultimately determined not to be at the same level of quality and was replanted with better Syrah material after the 2011 harvest.

Syrah in Napa Valley is always a tricky commercial proposition. One reason is that, as Syrah bottlings vary so widely in style in California, consumers often have little idea what to expect from a particular version, so it can be challenging for producers to sell significant quantities of a given Syrah. Then, too, inexpensive bottlings of Syrah, which are rare, tend to be rather generic in style. But even the priciest and most distinctive versions often represent a financial sacrifice for an estate, as the sites that can produce high-quality Syrah could in most cases be used to grow Cabernet Sauvignon, which generally commands a considerably higher price in the marketplace. In fact, Colgin’s Syrah has always been considerably less expensive than their Cabernet-based wines - but don’t feel sorry for the winery. The current vintage of their Syrah retails for $250 a bottle (vs. $450 for the Cabernets), making it the most expensive Syrah in America. In this case, you get what you pay for.

From the start, the Colgin version has been one of California’s most dramatic Syrahs: a flamboyantly ripe, head-spinning rich wine with deep dark berry fruit flavors complicated by iron-like minerality, earth and animal tones, wild herbs and sage. Yes, it displays glorious California mountain fruit intensity and high octane levels but its soil-driven complexity—its notes of gunflint, violet, pepper, olive, meat and herbs—give it a distinctly Old World aspect and leaven its New World sweetness. The maiden release, the 2002, was shockingly impressive for a Syrah from two-year-old vines, but it must be emphasized that even today the Colgin Syrah comes from relatively young vines—particularly by northern Rhône standards. Still, noted Colgin, the increasing vine age and deeper root systems have in recent vintages brought even darker color and “inkier,” stronger raw material and the vines have reached a better balance. It’s already incontestable that the site can produce outstanding Syrah but the best is still to come. 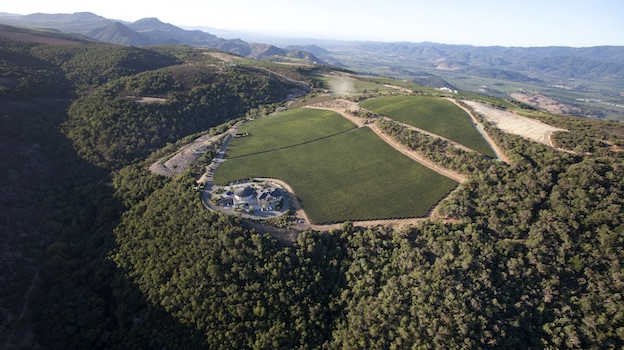 Colgin’s IX Estate, planted at the top of Pritchard Hill at an altitude stretching from 1,150 to 1,350 feet above sea level, faces eastward, an exposure that protects the vines against the hottest afternoon sun and preserves flavor intensity and aromatics. Peak daytime temperatures at this altitude are typically about eight degrees cooler than on the valley floor. The weathered volcanic soil of IX Estate features fast-draining gravel, rocks and boulders, as well as iron-rich clay that allows for some moisture retention. The ruggedness of the site makes the Syrah a powerful, intense, tannic wine. Although its alcohol level is typically around 15%, Chief Operating Officer Paul Roberts, MS, noted that the fruit is harvested “just under perfectly ripe—in other words, still crunchy.” Vine yields are normally between 2-1/2 and 3 tons per acre, and total annual production has typically been between 350 and 450 cases but has been lower in recent years owing to a short crop in 2011 and to the replanting that took place after the ’11 vintage (the wine from these replanted vines may make the cut to be included in the 2016 blend).

On the subject of Syrah and Cabernet, by the way, Colgin noted that the actual quantity of tannins in her Syrah is roughly equal to that of her IX Estate red blend, which goes a long way to explaining why none of the vintages made to date is past its peak. (According to winemaker Allison Tauziet, this is unusual for Syrah in California, and she credits the strong anti-oxidant properties of this tannic content for the color intensity and longevity of the wines.) Although the earlier Syrah vintages are in their windows of peak drinkability, they all still have life ahead of them—and more recent vintages, thanks to the greater depth provided by vines that are now well into their teen years, appear capable of a 20+ year evolution in bottle.

The Vinification and the Wines

Mark Aubert was the winemaker at Colgin Cellars at the beginning of the Syrah project and made the 2002 through 2006 vintages. Tauziet took over in 2007. Both had previously served apprenticeships at Colgin as assistant winemakers. Consultant Dr. Alain Raynaud, who has owned several properties in Pomerol and St.-Émilion, has played an active role in blending the Colgin Cellars wines since 2001. 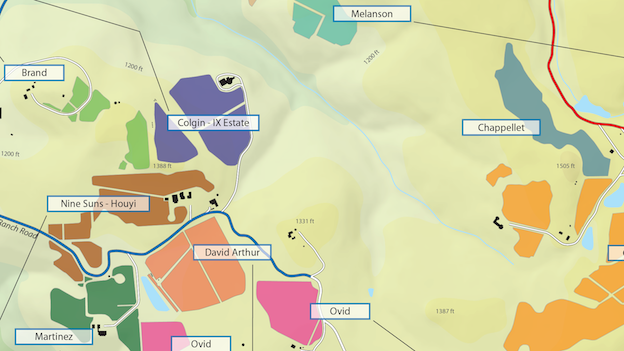 Colgin's IX Estate as seen in the Vinous Map: The Vineyards of Napa Valley, Pritchard Hill, by Antonio Galloni and Alessandro Masnaghetti

The estate has typically picked its Syrah from mid- to late September (mid-September has been the practice more recently). Tauziet generally begins by carrying out a short cold soak lasting no more than four days. The fruit here has always been destemmed; Tauziet believes that vinifying with stems would give the wines an element of rusticity and distract from their fruit. For extraction, Colgin Cellars has traditionally relied on pumpovers, but Tauziet has introduced some punchdowns in recent vintages, particularly with specific blocks that she feels produce fruit with “more extractable skins that have more to give.” The early vintages were aged in about 50% new oak but from roughly 2004 through 2010 the Syrah was aged in 100% new barrels. Since 2011, Tauziet has brought that percentage down to about 75% - “or whatever percentage feels like it will promote the best fruit aromatics while ensuring evolution of the wines and good support of their tannic structure.” She added, “Once-used wood tends to preserve fruit aromas but it also prevents evolution of the tannins. These wines have such good structure that they need to evolve in barrel to carry finesse, so they are really best suited to new oak. It’s always a question of balance.”

The IX Estate Syrah, in theory at least, is racked only once, a couple months prior to being bottled early in its second summer, without fining or filtration. Finished alcohol levels are typically around 15%, although the great 2004 exceeded 16% and the 2008 also reached that threshold. The pHs have been in a fairly narrow range, between 3.85 and 3.95 following slight acid adjustments in the fermenter. Total acidity levels have ranged from 5.8 grams per liter to 6.2. 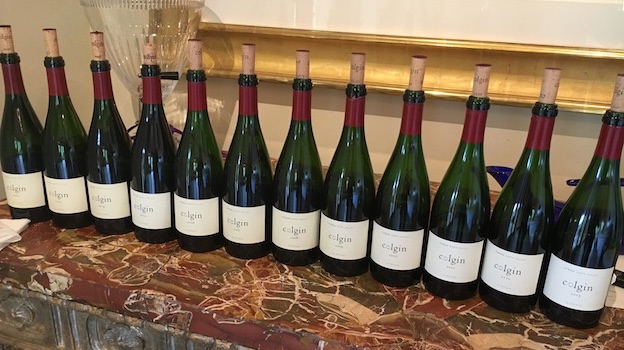 I tasted the full range of vintages at IX Estate in early March with Colgin, Tauziet and Roberts.