For the last two years Alessandro Masnaghetti and I have been hard at work on a map of the Santa Lucia Highlands. Our first edition is nearly complete. Formal approval of a change in the AVA’s southern boundary is all we are waiting for to wrap things up. In the meantime, we are going take you behind the scenes in this article, which represents a summary of our work so far. It will surely be updated and refined in the coming months.

The Santa Lucia Highlands encompasses 6,400 acres of vineyards in a strip approximately 18 miles long in the Santa Lucia Mountain range, in Monterey County, about two hours south of San Francisco. This rugged stretch of land consists of a series of alluvial fans in the Salinas Valley that rise into hillsides, elevated plateaus and terraces, all created by land that was broken off from the North American plate and moved north by the force of the San Andreas Fault somewhere in the range of 60-250 million years ago.

The three-map series below provides clear views of the Santa Lucia Highlands and its distinctive terrain. In the first map we observe the Santa Lucia Mountains and its two major subdivisions: the North and South Benches, which we describe in more detail below. The second map overlays the vineyards (in red) and other ranch land (in beige). Lastly, the third map shows the alluvial fans and major geologies of the Santa Lucia Highlands, as described by the County of Monterey. The main alluvial fan deposits (Chualar, Gloria, Placentia and Holocene) are essentially variations on sandy loams. In our experience, county data is instructive, but the nuances of each specific property naturally can’t be fully captured in a government survey. Nevertheless, we show the data as a starting point in what is a much more complex discussion that we look forward to expounding upon in the near future. 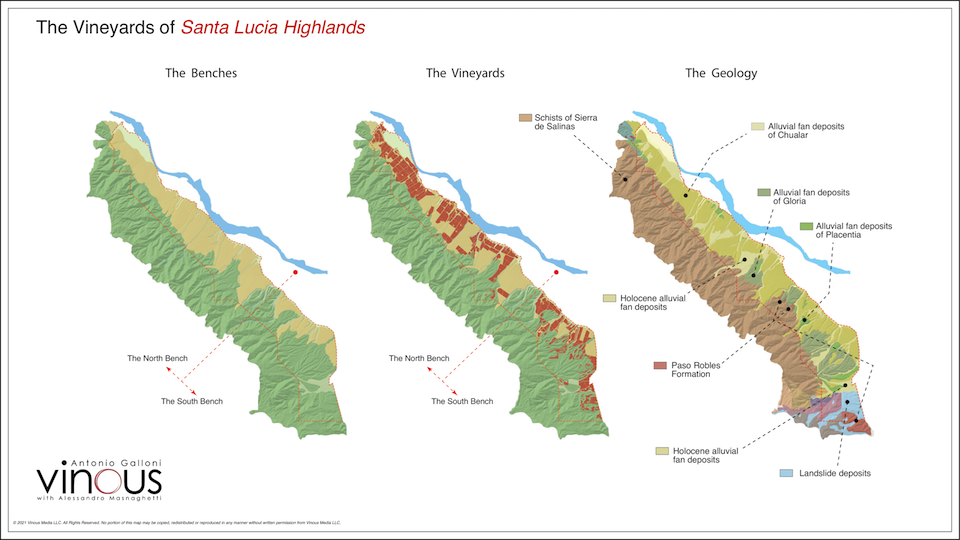 Building an understanding of the Santa Lucia Highlands; 1) a macro view starting with mountains (left) and benches (right), 2) this view shows vineyards (in red) in more detail, 3) the main geological formations.

For most of its recent history, the Santa Lucia Highlands was primarily agrarian land used to raise cattle and farm row crops such as white beans, sugar beets and potatoes. Jerry McFarland, Rich Smith, Nicky Hahn and Rob Talbott developed the first vineyards in the early 1970s. At the time, most locals considered clearing these hillside lands for the cultivation of grapes a radical idea.

The 1980s was a period of tremendous activity. Steve McIntyre, who had been at Hahn, purchased his own vineyard and began a consulting business that saw him develop numerous properties throughout the region. Gary Pisoni planted his vineyard in 1982 using cuttings from a famous Burgundy vineyard. A few years later, Chuck Wagner of Caymus followed with Mer Soleil. The Santa Lucia Highlands was recognized as an American Viticultural Area (AVA) in 1991. Gary Franscioni, whose family has roots in the Santa Lucia Highlands going back to the 1880s, planted Rosella’s Vineyard, the first of his ranches, in 1996.

Around this time the wine world began to notice the potential of the Santa Lucia Highlands, driven by investments from Napa Valley families and an explosion of small artisan wineries that made wines from these vineyards. Kosta Browne, Peter Michael, Siduri and Testarossa are among the wineries that introduced consumers and professionals alike to the Santa Lucia Highlands. The wines, especially the Pinots, were bold, juicy and easy to like.

Even today, most of the fruit grown in the Santa Lucia Highlands is sold to outside wineries. Although that means there are very few tasting rooms in the region for curious oenophiles to visit, the names of the Santa Lucia Highlands’ top vineyards have become brands of their own because of the broad exposure they gained over the years on so many labels from top producers.

One of the key defining features of the Santa Lucia Highlands is its proximity to Monterey Bay and the resulting influences of fog and wind. These elements create a cool-climate region that is ideally suited to the cultivation of Chardonnay, Pinot Noir and Syrah. Although these three varieties dominate today, originally much of the land was planted to Riesling, a reminder of its origins as a viticultural region.

Every evening fog rolls in from the bay, starting in the north and then working its way southeast, a process that takes 30-60 minutes. In the morning, the fog rolls out, moving in the opposite direction, from south to northwest, which takes another 30-60 minutes. This means that the northern section of the Santa Lucia Highlands, the North Bench, is more impacted by fog than the warmer South Bench, which can see an hour or more of sun each day during the critical days of the growing season.

Strong wind gusts are another distinctive feature of the Santa Lucia Highlands. The winds typically come in during the early afternoon hours. Winds dry humidity from the early morning fog and tend to slow down ripening, resulting in slow growing seasons, extended hang time on the vine and grapes with thick skins and naturally concentrated flavors. 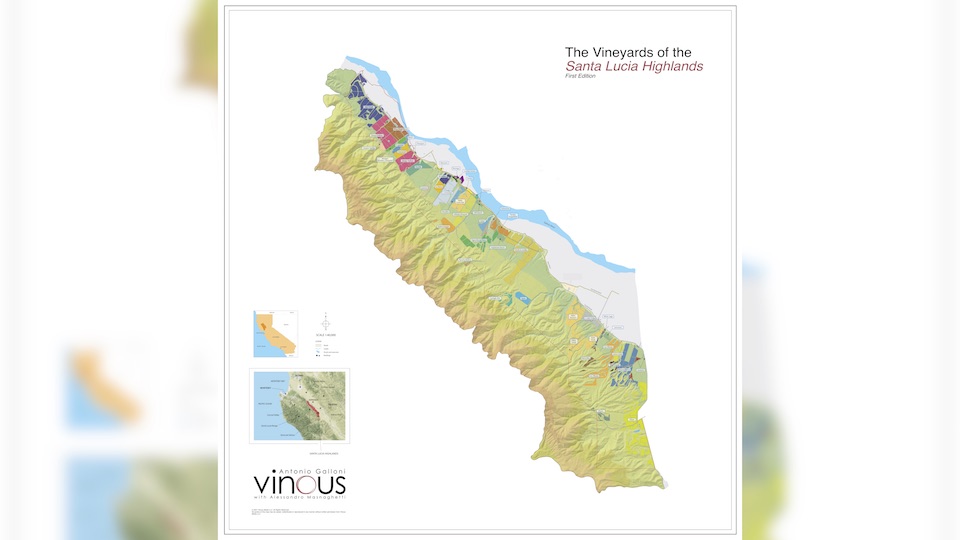 The Vinous Map of the Santa Lucia Highlands, by Antonio Galloni and Alessandro Masnaghetti, scheduled for publication in 2021. © 2021, Vinous.

Getting a Lay of the Land

In the past, the vineyards of the Santa Lucia Highlands were depicted in a horizontal arrangement, a layout that was easy to grasp visually, but that also omitted some important details. The first of these is the true orientation of the Santa Lucia Highlands, which is not horizontal at all, but closer to 45 degrees, as seen in the Vinous map above, which is aligned in true north-south. Altitude, orientation and topography are absolutely critical in gaining an understanding of the region. We further divide the vineyards into two very distinctive benches.

The North Bench starts at Mer Soleil and runs down to Smith & Lindley. In this part of the appellation we observe a series of mostly gently sloping hillside vineyards and plateaus, with greater uniformity than in the south. Soils are variations of sandy loams. The terrain is deeper and more fertile than in the South Bench. A greater influence of fog vis-à-vis the south results in slightly cooler temperatures and the ability to capture more freshness, if desired. Taken together, these conditions yield wines with strong aromatic presence and often red/purplish leaning fruit profiles for the red wines. 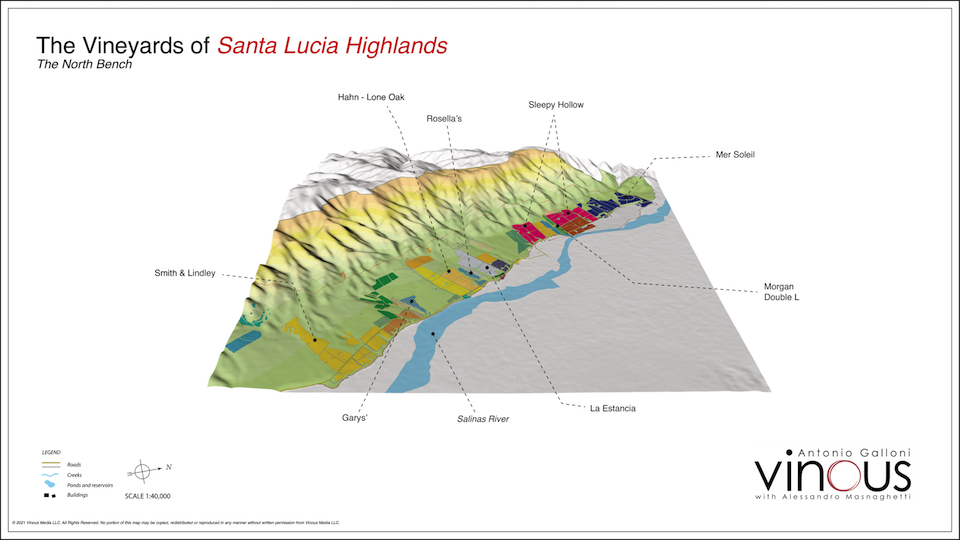 A dramatic ravine between Smith & Lindley and Hahn – Doctor’s forms a natural boundary that separates the North Bench from the South Bench. Here, in the southern reaches of the Santa Lucia Highlands, the contours of the land immediately become less uniform and more rugged. Moving south, we find generally poorer, well-draining soils of decomposed granite and gravel. These soils do not retain moisture particularly well and stress the vine. Because of these conditions, wines from the South Bench are generally deeper, darker and more structured than those of the North Bench. 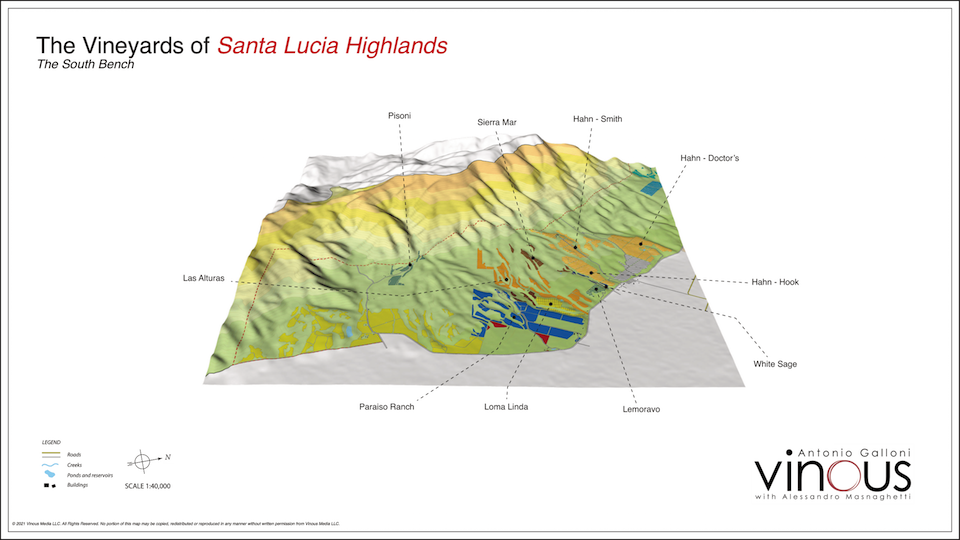 Vinous Maps are much more than just illustrations of vineyard boundaries. Visually, we strive to capture the essence of each appellation in vivid, topographical detail. The backs of our maps describe the history of each appellation and its key vineyards, with smaller 3-D maps like those above that allow us to focus on key elements of each region. We aim to distill the essence of these attributes, along with microclimate, geology, soils and number of other factors, in order to gain a deeper understating of a region, and ultimately, of its wines. When it is finished, the back of our Santa Lucia Highlands map will look like our map The Vineyards of Oakville. 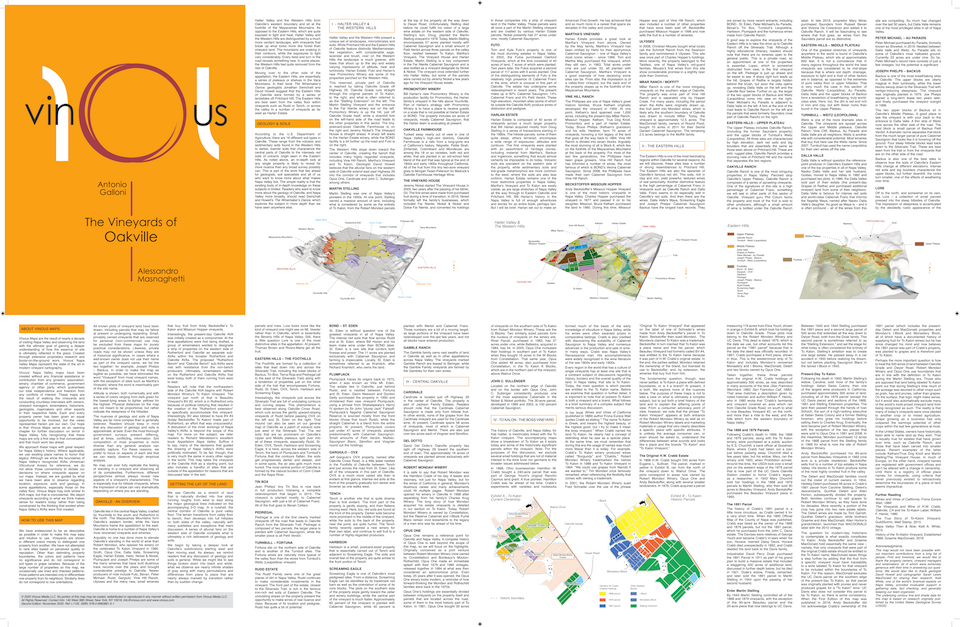 The Vinous Map of The Vineyards of Oakville (back), by Antonio Galloni and Alessandro Masnaghetti, Second Edition, © 2021, Vinous.

Since 2015 we have been working on a large-scale project to map the vineyards of California. To date, we have published seven regional Napa Valley maps and have several more in the works, including a five-map set of Sonoma Valley and a map of the Santa Lucia Highlands, both of which are nearly finished. Although travel restrictions related to COVID-19 have delayed final, on-the-ground checks that are such an essential part of the quality control process, we are eager to share our work and show you a little bit of what we have been up to through this series of excerpts.