The Vinous vintage chart rates 2010 as the top vintage for Napa Valley Cabernet between 1991 and 2013. As my recent retrospective tasting showed, the 2010s are overdelivering on their early promise.

As I tasted through well over a hundred California Cabernets from the 2010 vintage this spring, with steadily building excitement, I could not help thinking of . . . the 2010 red Burgundies. Both sets of wines came from mostly cool growing seasons with serious climatic challenges (variable, sometimes stormy summer weather and a cool harvest with some rain in Burgundy, and sharp heat spikes on California’s North Coast in late August and September, the first of them particularly severe). On paper, neither season could be considered a no-brainer.

And yet, in terms of the wines produced, both are spectacular at the level of the better producers: ripe but not overripe, dense but not heavy, and offering a potentially full range of the aromas (fruits, flowers, minerals, herbs, soil) inherent to their sites. The successful wines are classy, concentrated and delineated, savory as much as sweet, and firmly structured but not hard, thanks to fully ripe, broad tannins. Although both sets of wines are built for medium to long-term aging, they have never been particularly sullen or closed. It’s the rare 2010 Cabernet (or 2010 red Burgundy) that cannot be drunk with great pleasure right now—in some cases following a bit of aeration—and most of the wines are open today, if not downright beguiling. But to my palate, the most important characteristic that these two groups of wines have in common is something intangible: personality. They are wonderfully aromatic and endlessly fascinating.

Now put all thoughts of Burgundy out of your heads. This article is about Napa Valley Cabernet, in all its glory. 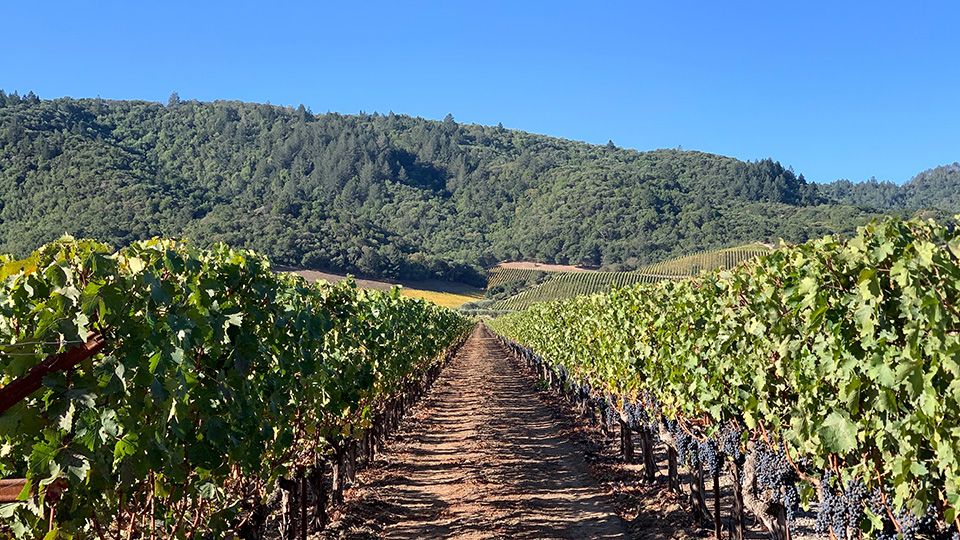 A striking view just before harvest 2019, Dominus in the foreground, with Blankiet in the background.

A Brief Recap of the 2010 Growing Season

As a vintage recedes in the rearview mirror, its features become increasingly hard to discern. Thus the following information borrows heavily from my initial International Wine Cellar report in 2012 on the 2010 vintage in Napa Valley, which in turn was based on my face-to-face, IRL tastings (remember those?) with dozens of producers who had the memory of the 2010 growing season and harvest fresh in their minds.

The bud break in 2010 occurred from the last days of March through the first half of April following a wet winter (January in particular featured copious precipitation). The flowering was pushed back to late May and the first half of June as the months of April and May continued cooler than usual, with significant rainfall in April and further precipitation in the second half of May. The storm in late May resulted in uneven berry size within clusters in some earlier-flowering spots (millerandage in French, or "hens and chicks" in American wine vernacular). High-altitude sites often flowered particularly late: Randy Dunn cited June 15 for his vines on Howell Mountain, noting that the first 80-degree day of the season didn’t occur until June 5. (He eventually harvested into early November.) 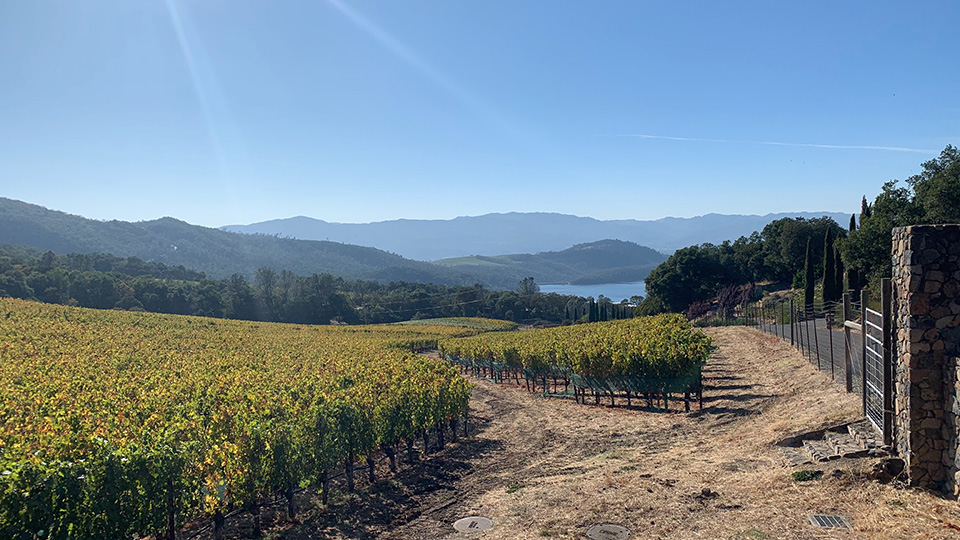 Through mid-summer, particularly where yields had not been reduced by problems during the flowering and where the spring moisture had spawned dense canopies, many growers pulled leaves to aerate their vines and get more sunlight on their grapes, which were well behind their normal ripening schedule due to the cool season. But this measure proved to be disastrous when a brutal, record-breaking heat spike (producers reported temperatures as high as 115 degrees in some vineyards on the Napa Valley floor!) struck on August 23, 24 and 25. Those growers who had stripped off leaves watched some of their unprotected grapes fry, and of course some of the remaining leaves turned yellow. Merlot and Zinfandel, not to mention Chardonnay, were generally harder hit than Cabernet Sauvignon, which was nowhere near ready to harvest.

After a very short respite, temperatures soared again briefly at the beginning of September, once again resulting in vine stress in many sites, before turning mostly cooler than normal until a week of Indian summer conditions at the end of that month. (There was yet another period of heat from October 12 to 14 that gave some vineyards the last nudge they needed to ripen fully.) This benign period in September gave growers in Napa Valley nearly three weeks to comb through their vineyards and remove sunburned grapes (if they hadn’t already desiccated and fallen off the vines) before beginning to harvest in late September. During this period, some growers panicked and brought in fruit that was not yet fully ripe. But for most estates, especially those at higher altitude but even some on the valley floor, the Cabernet came in quite late, often entirely in October. Overall, the harvest took place one to four weeks later than normal, depending on the site. While most growers described the period between the flowering and the harvest as longer than average, others said it was roughly normal, as bloom had also been late.

And what didn't cook the grapes often made them stronger. Many producers whose fruit was not seriously hurt by the late August and early September heat spikes noted that the late-season warmth, especially during the last week of September, was crucial to helping their Cabernet fruit ripen. Growers in many high-altitude sites had to let their fruit hang late in order to get it ripe, and were at risk of being affected by substantial rainfall during the last week of October. Of course, producers who had the ability and wherewithal to carefully eliminate substandard fruit (overripe and underripe) as it came off the vines or into the winery were able to make much better wines. A number of the best producers reported bottling considerably less of their flagship Cabernets and Bordeaux blends than normal. Not only had a good bit of Merlot been compromised by the heat, but some producers reported significant crop losses in Cabernet Franc and Petit Verdot too. 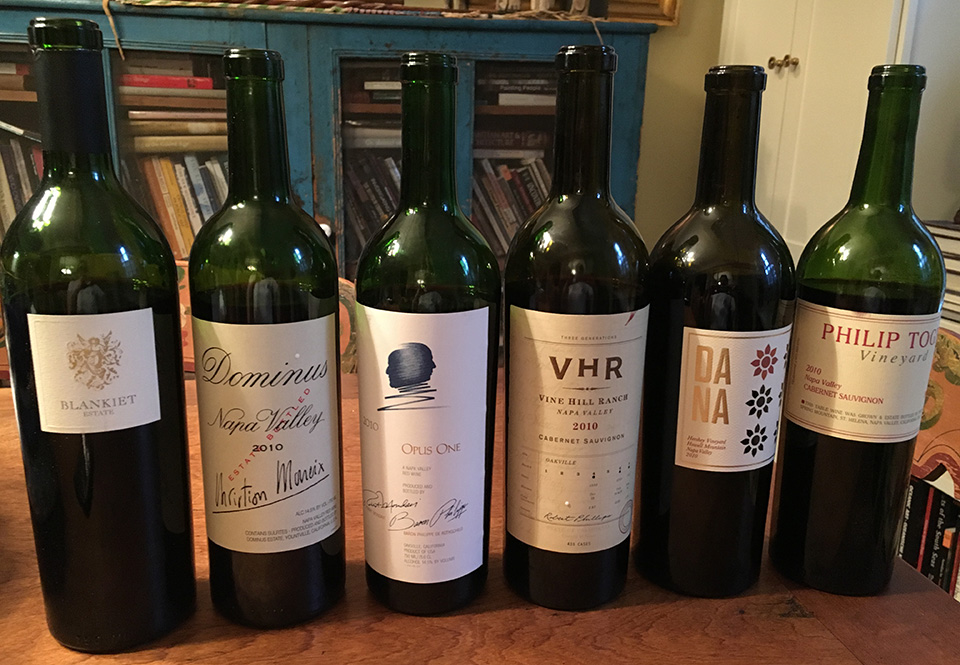 The 2010s Then and Now: Sensational

From the outset, the 2010 Cabernets displayed a rare combination of power and elegance, with the better examples showing noble, integrated, plush tannins from slow ripening. Almost miraculously in light of the severe late-August heat wave, 2010 produced a set of wines with healthy natural acidity, high-pitched aromas and flavors, and pronounced site specificity. The wines had considerable density, and even where potential alcohol levels approached 15%, they mostly avoided the roasted character of wines from hotter summers. Fruit aromas were fresh and pure, and the wines showed very good mid-palate energy. Their mostly sound acidity levels combined with their tannins to provide the wines with excellent structure for graceful aging.

Lesser wines, such as those made from grapes whose yields were too high or whose sugar levels rose quickly via dehydration during late heat, showed less uniform ripeness: varying degrees of herbacity; less suave tannins; less density, dimension and length; and less aging potential.

Ten years later, the wines showed spectacularly. In fact, of the dozen California Cabernet vintages I have tasted in depth in recent years for major horizontal reports on Vinous, 2010 delivered the highest average level of quality. Never before have I rated so many wines 95 points or higher—or found so few disappointments. Tasting all of these wines in my dining room while sheltering in place in New York City this spring also allowed me to spend more time with them than I normally can when I taste them in considerably larger groups at Napa Valley Vintners in St. Helena. I was also able to follow more of them as they continued to evolve for up to several days in the recorked, refrigerated bottles. In fact, the smaller flights of wines that I retasted a day or three later, which represented the crème de la crème from my previous tastings, were mind-blowing in their quality and sex appeal. Imagine having five glasses in front of you, containing properly aerated samples of Harlan Estate, Blankiet, Dominus, Spottswoode and Ridge Monte Bello.

In my tastings in recent weeks, the better 2010s conveyed a savory European juiciness, with elements of herbs, tobacco leaf and menthol giving energy and complexity to the wines without coming across as raw or vegetal. Very few of the wines that I tasted showed evidence of the late-season heat spikes. Even the few bottles that displayed liqueur-like or porty (ruby, not tawny!) aromas maintained sound levels of acidity and fresh fruit. And the herbal notes are an integral feature of many wines from this mostly cool growing season (Robert Mondavi Winery’s Chief Winemaker Geneviève Janssens described 2010 as “a summer with no summer”). But those who harvested too early were more likely to have made wines without enough sweet fruit and flesh to buffer their herbaceous components. Some 2010s were characterized by dry tannins and finishing tartness, also from underripe grapes, but these wines were in a distinct minority in my tastings. 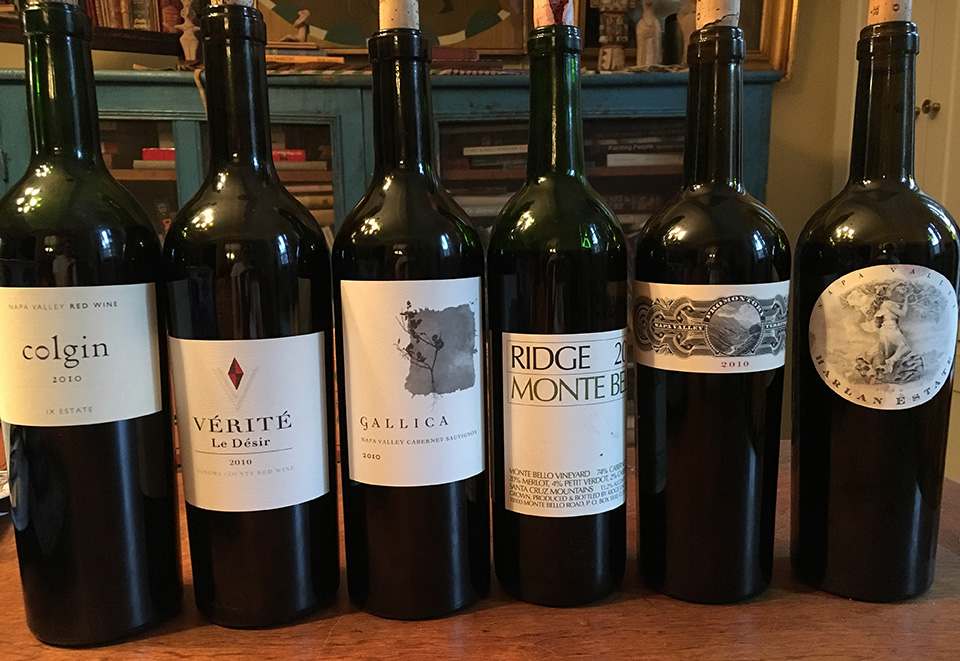 I’m tempted to say that the heart of Napa Valley (from Yountville through Oakville and Rutherford) made the consistently best wines, but I tasted outstanding examples from literally everywhere in the Valley, and from mountain sites in Sonoma County as well. (As in past horizontal tastings, I included a few reliably outstanding bottlings from outside Napa Valley.)

When I first reported on these wines from bottle back in 2013, I wondered out loud if the 2010 Cabernets would be appreciated more by Europhiles for their aromatic complexity, finesse of grain and refined tannins than by drinkers who gravitate toward riper New World fruit, size and power. But ultimately this is a vintage for just about everyone. Although the best wines have a sexy savory quality that I associate more with Old World wines, they also possess glorious California fruit that remains vibrant ten years later. The better wines convey clear varietal and terroir character. If the 2010s are not generally outsized by California standards, they are plenty rich and deep, with terrific flavor intensity and persistence on the palate. Ten years later, the wines boast deep, bright colors that in many cases seem virtually unchanged from the outset; only a few of the wines I tasted revealed even a hint of amber development at the rim. And the tannins are mostly fine-grained and sweet.

So, assuming your wines have been stored properly from the start, consider enjoying some of these bottles this fall and winter, but save the best for more fireworks ahead.