Miani is one of Italy’s cult properties, and with good reason. Proprietor Enzo Pontoni crafts some of the most profound, monumental wines readers are likely to come across. The range includes a number of compelling whites, two phenomenal Merlots and an equally majestic red from Refosco, the legendary Rosso Calvari, all made in miniscule quantities. Incredibly, this was the first comprehensive vertical tasting Pontoni had ever held of his Merlots. Because bottles have become extremely scarce – even in Pontoni’s own cellar – a number of wines were tasted from magnum, a format that is not commercially available. To say this was unforgettable tasting would be a colossal understatement, as the wines were brilliant in every way.

Enzo Pontoni represents the very finest of the Italian vigneron spirit. Originally trained as an engineer, Pontoni spent the first part of his career working in many of Italy’s largest cities, a cosmopolitan life that seems like another world compared to these humble, agrarian surroundings. Shake his hand though, and it is clear Pontoni is a man of the land. Despite his lack of formal training, Pontoni seems to be blessed with a prodigious, innate talent for understanding his vineyards. He is intensely critical of his own wines to a degree I have rarely seen in another producer and his excruciatingly high standards are the stuff of legend in the parts. The wines only go into bottle when Pontoni feels they are exceptional. Accordingly, there was no Merlot in 1995, 1996, 2003 or 2005. 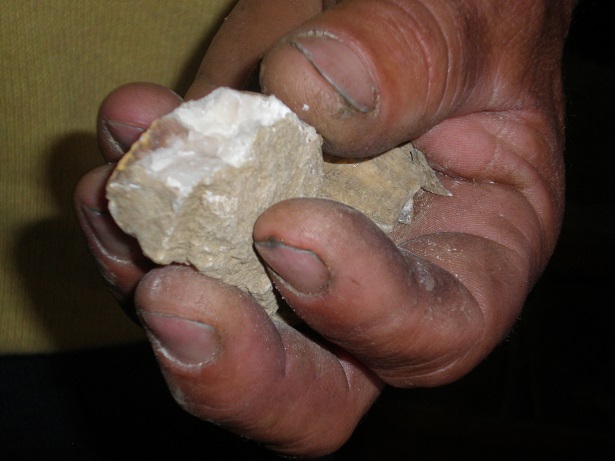 Virtually all of the emphasis at Miani is on the vineyards. Pontoni’s philosophy relies on old vines, tiny yields and a maniacal dedication to the land. The winemaking facilities and cellar are as stripped-down as possible. Among the items of interest are several farming tools Pontoni designed and built on his own. Otherwise, the winery itself is unremarkable. Pontoni farms a number of tiny Merlot parcels in the towns of Rosazzo and Buttrio, both in the Colli Orientali appellation in Friuli. The early Merlots were made from a combination of fruit from Rosazzo and Buttrio, but in 2004 Pontoni began experimenting with bottling the wines separately; giving birth to his Merlots Filip (Rosazzo) and Buri (Buttrio). The Filip is generally rounder and more immediate while the Buri is firmer, fresher and more structured, with greater overall complexity. I consider the Merlot Buri to be one of the most profound expressions of Merlot on the planet.

Pontoni’s first commercial release was 1987. The early reds were made in a relatively fresh style. It would be a few years, until 1993 or so, before Pontoni’s work in the vineyards would give him the raw materials to make the style of rich, complex wines consumers are familiar with today. In the following years Pontoni sought a super-ripe style supported by lengthy periods of aging in new oak, an approach that was in fashion throughout Italy during the mid to late 1990s. Since then he has moved to slightly earlier harvests, gentler extractions and reduced the period of oak aging, all choices that have left the wines with more freshness, detail and textural elegance than was sometimes the case in the past. Pontoni’s Merlots are still building their track records, but judging by this and other tastings, they are more than living up to the potential my high scores have suggested over the years. 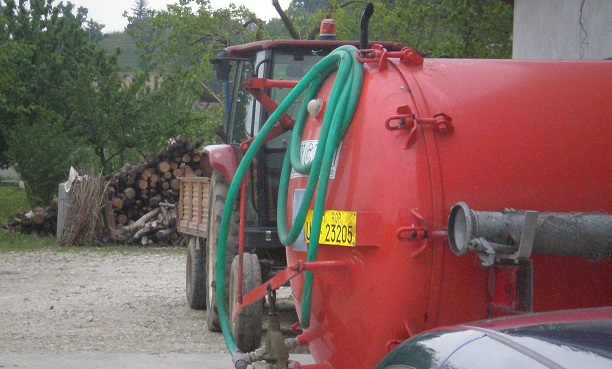 The 1994 Merlot is a sublime wine in this important vintage for Friulian reds. Layers of dark fruit, grilled herbs, spices and tobacco emerge from this medium-bodied yet surprisingly rich wine. Refined, elegant tannins frame the fruit all the way through to a long finish that practically lasts into the next day. This is a wine that made me literally lose my mind. Wow. In 1994 the growing season was quite hot, but then freshened up towards the end of the maturation cycle. The 1994 Merlot saw 11-12 days of fermentation and maceration, and was aged in 100% new French oak. Drinking window: 2009-2014.

The 1997 Merlot (magnum) is remarkable for the integrity of its fruit and its overall freshness. This muscular Merlot flows with the essence of graphite, minerals, grilled herbs, spices and dark fruit. The 1997 is perhaps the most unctuous, opulent Merlot in Miani’s history. Although tertiary notes have begun to emerge, the wine will continue to age nicely on its sheer density and looks to have at least another decade of very fine drinking to offer. The 1997 Merlot captures the peak of Pontoni’s search for muscle and extraction in his wines. One might argue that the 1997 is a touch monolithic, but at this level that is pretty much splitting hairs. The 1997 Merlot saw a relatively lengthy fermentation and the various lots spent 30-33 months in French oak. Drinking window: 2009-2019.

The 1998 Merlot (magnum) is another firm, tightly-wound wine. This isn’t one of the flashier vintages, but as the wine sits in the glass its pedigree emerges with great eloquence. Suggestions of graphite and minerals add complexity on the cool, refreshing close. In time the 1998 may very well challenge some of the very finest vintages here. There is a slightly angular quality to the 1998 that is in some ways reminiscent of the 2002, but the truth is that any other producer in the world would kill for a wine like this! Rain and generally deteriorating weather towards the end of the growing season forced Pontoni to bring in the fruit a few days earlier than he would have liked and for that reason he finds a slight touch of greenness in the wine. Drinking window: 2010-2020. 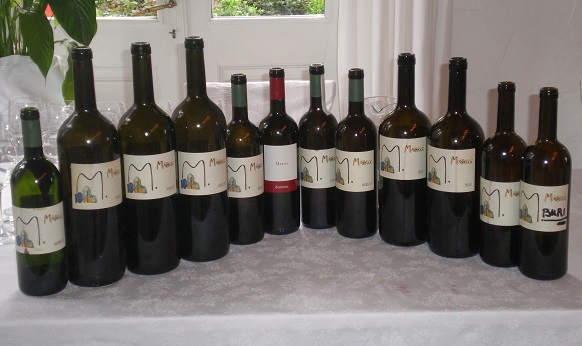 The 1999 Merlot (magnum) marries power to elegance in a style that foreshadows the wines of recent years. This is simply an awesome bottle of wine, that’s all there is to it. Everything is right there in the glass; inner perfume, ripeness and complexity all come together in a profound Merlot of the highest level. This three-dimensional Merlot should continue to drink beautifully for at least another decade, perhaps longer. The 1999 is the first wine that shows a more enlightened approach to vinification, and it is marvelous juice. Drinking window: 2009-2021.

The 2000 Merlot is one of the leaner wines in this tasting. Here the acidity is a touch high and the wine reveals more of a linear expression in its dark fruit, leather, licorice and spices. The 2000 Merlot is beautifully balanced, especially considering the less than optimal conditions that year, but it understandably lacks the explosive quality that informs Miani’s very finest vintages. Pontoni relates that he had higher hopes for the 2000 when it went into bottle. Drinking window: 2009-2019.

The 2001 Merlot is a beautiful, stunning wine. Still somewhat coiled, the 2001 reveals impeccable balance in its silky fruit, new leather, chocolate and spices. This is a refined, layered wine, yet the aromas and flavors are very slightly forward, suggesting it won’t be one of the most long-lived vintages. In the meantime, it should provide memorable drinking. In 2001 production levels were normal, which is to say Pontoni bottled just eight barrels of this juice. As always, the wine was aged in 100% new oak, mostly Taransaud with a touch of Vicard. Drinking window: 2011-2019.

The 2002 Merlot makes an eloquent case for a place alongside Giacomo Conterno’s Barolo Riserva Monfortino as one of the finest Italian reds to emerge in this very difficult harvest. The wine is simply awesome for its sheer pedigree even if today it is a touch rough around the edges. After a few hours in the glass the wine comes together, hinting at its ultimate potential. There is tons of inner sweetness to be found, along with suggestions of roses, raspberries, roasted coffee beans and spices. In 2002 Pontoni had the courage to wait to harvest until after the rains had passed, and for his patience he was rewarded with an utterly profound, magnificent wine. The 2002 Merlot can be enjoyed today if opened several hours prior to serving, but it will continue to gain complexity in bottle. This is another marvelous vintage and one of my personal favorites. Bravo! The 2002 spent 24-26 months in 100% new French oak. Drinking window: 2012-2022. 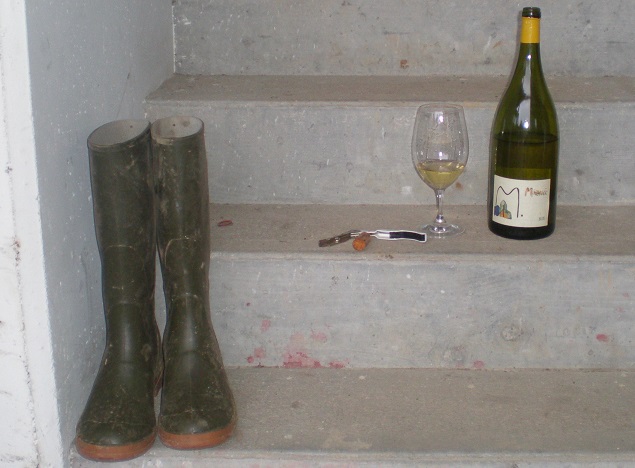 The 2004 Merlots, both tasted from magnum, represent the first vintage in which Pontoni bottled his wines from the villages of Rosazzo and Buttrio separately. The 2004 Merlot Filip (magnum), from 50-60 year-old vines in Rosazzo, reveals awesome richness and length in a refined, perfumed style that is simply breathtaking. It is an exceptional wine in every way, but I am most struck by the vivid detail of roses, mint, flowers and sweet spices, along with the silkiness of the tannins. This is utterly sublime juice. Drinking window: 2012-2024. The 2004 Merlot Buri, from vineyards in Buttrio, is even better. The Buri is a firm, powerful and massively structured wine bursting with dark fruit, licorice, graphite, leather and melted road tar in a sepia-toned expression that recalls a great Serralunga Barolo. The long, powerful finish lasts an eternity. Significant patience is required, but readers lucky enough to own this bottle are in for a thrilling drinking experience that will satisfy the intellectual and hedonistic senses to the maximum.  Drinking window: 2014-2026.

The 2006 Merlots look to be equally superb. As is typically the case, the Buri is significantly more backward than the Filip, but both wines are full of promise. The summer was hot, particularly during July, but later on in the growing season bouts of rain lowered temperatures and allowed for a leisurely October harvest. The 2006 Merlot Filip is austere and powerful. Blackberry jam, chocolate, spices and leather emerge from this refined red. The 2006 is painfully young at this stage and will require significant patience, but it is shaping up to be magnificent. In a word: awesome. Drinking window: 2016-2026. The 2006 Merlot Buri shows extraordinary balance in a mineral-infused expression of ripe, dark fruit. The wine turns even more complex in the glass, as layers of sweet menthol, grilled herbs, spices and graphite emerge over time. In 2006 the Buri was made from eight tiny parcels in the town of Buttrio. As I look at my notes I am struck by this phrase; “great, great, great!” Drinking window: 2016-2026.

We finished with the 2006 Tocai Buri, which was tasted from magnum. This superb, chiseled white lingered on the palate for an eternity with layers of crushed rocks, laser-like fruit and flowers. The wine was so extraordinary I confess I drank two full glasses…and enjoyed them immensely. A vertical of Miani’s epic Rosso Calvari is next on the schedule. Needless to say, I am already looking forward to that date with much excitement and anticipation. Drinking window: 2012-2021.