Feudo Montoni is one of Italy’s best but still relatively little known estates. In fact, despite boasting a lineup of great wines and having been around for some time, Feudo Montoni (the winery is housed in a villa that dates back to 1469) does not enjoy the fame and visibility of Sicily’s many larger wineries. I have no doubt that this will all change soon enough, because there are few  estates anywhere in Italy making more compelling wines today. 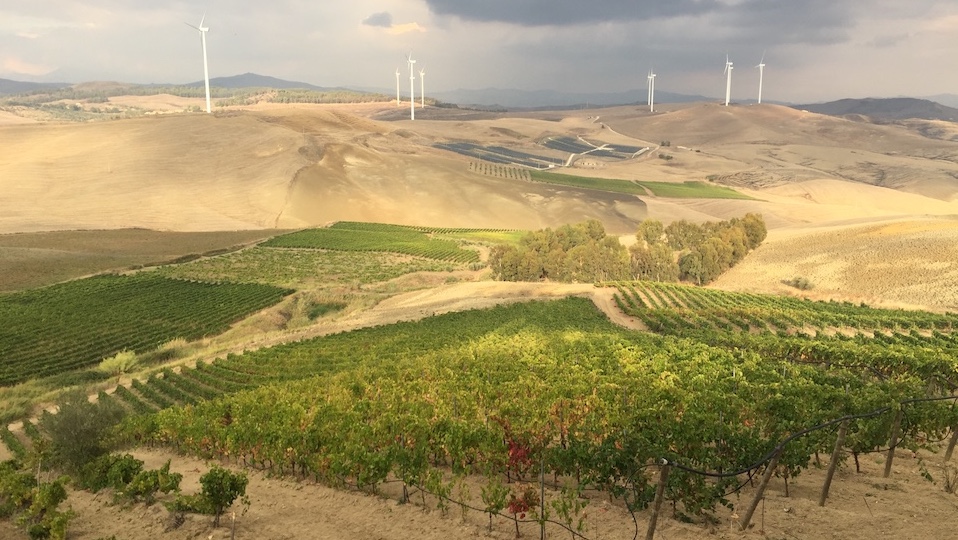 The vineyards at Feudo Montoni

Owner Fabio Sireci isn’t just passionate and knowledgeable, he is also extremely talented. That skill is attested to by a rare degree of proficiency with a number of different Sicilian native varieties. Feudo Montoni’s Grillo, Insolia and Cataratto wines are also amongst the best examples of their respective grape varieties. However, it is with Nero d’Avola that Sireci attains his greatest results. Sireci’s two Nero d’Avolas, Lagnusa and Vrucara, rank alongside Italy’s best reds. Each wine has a unique personality: the former is a fresher, earlier-maturing wine, while the latter is a more ageworthy, tactile and deeper Sicilian red. But as good as the Nero d’Avola Lagnusa is, it is the Vrucara that is one of Italy’s most noteworthy red wines.

Feudo Montoni is located in the Valledolmo viticultural zone of Sicily, roughly in the mid-east- section of the island. The winery’s vineyards are not located far from those of Tasca d’Almerita, one of Sicily’s oldest and most respected wine estates.The Sireci family once sold its grapes to Tasca. In fact, the Nero d’Avola grapes now used to make Feudo Montoni’s Vrucara bottling were long an important component in Tasca’s famous Rosso del Conte Nero d’Avola. 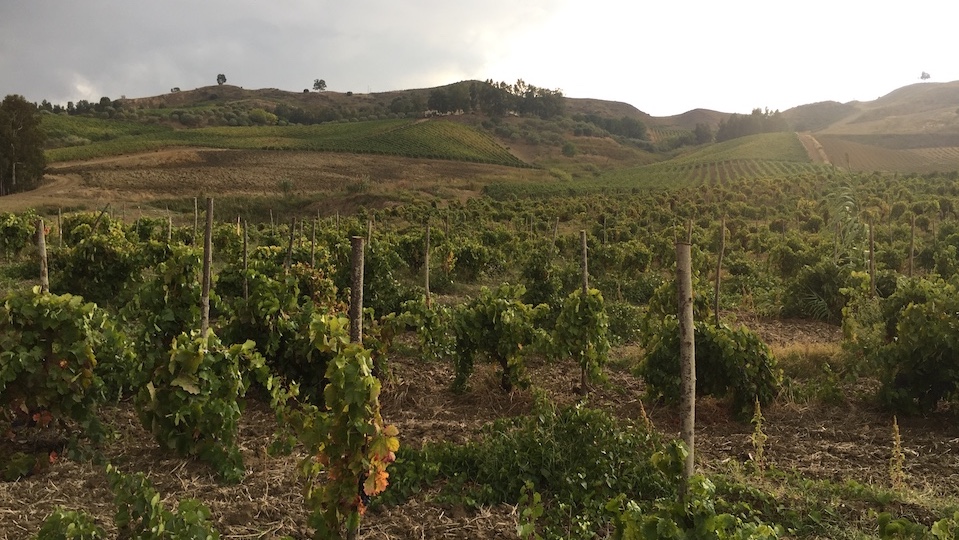 Feudo Montoni was founded in the 1800s when Rosario Sireci, the grandfather of current owner Fabio Sireci, bought the winery and the vineyards, driven by a conviction that the area harbored unique old vines that could make wines that were different (and in his mind, better) from those he had tasted made with grapes grown elsewhere. Over the decades that followed, Rosario’s sons Elio and Fabio have relentlessly performed massale selections propagating the very old red and white local biotypes of native Sicilian wine grapes that grew on their property. Therein lies part of the secret of Feudo Montoni’s success today. In fact, over the years, many of the island’s other winemakers and producers have come knocking on Sireci’s door asking for cuttings to plant at their own estates.

Besides making true to type, varietally accurate wines, I find another strength of Feudo Montoni is their ability to make Nero d’Avolas that clearly speak of specific Sicilian terroirs. In Italy, only Gulfi makes Nero d’Avolas that are of a similarly high quality level and that are as varietally accurate as those of Feudo Montoni. However, Gulfi’s wines smell and taste completely different from those made by Fabio Sireci. The main reason for this is that while Nero d’Avola grows practically everywhere in Sicily, it gives wildly different results depending on where it is planted. Just like, say, Nebbiolo, Pinot Noir and Riesling, Nero d’Avola is remarkably adept at translating even minute terroir differences into the glass. In fact, given relatively similar viticultural and winemaking techniques, Nero d’Avolas made, for example, in the area around Menfi show completely different aroma and flavor profiles from those made near Noto (and even more so from those of nearby Pachino), or the Nero d’Avolas made near Palermo. Just like the Nebbiolos of Serralunga are recognizably different from those of La Morra, Nero d’Avola too gives altogether different wines, depending on the terroir’s characteristics. During the twentieth century, due to a combination of questionable winemaking practices and poor viticultural decisions, such differences were often hard to discern, but the cleaner, purer wines of the 21st century are now bringing such diversities out into the open. The Feudo Montoni wines showcase the more refined, perfumed nature of Nero d’Avola made from old vines and high altitude viticulture. Sireci’s vineyards lie at 500-600 meters above sea level and the aromas and flavors of his Nero d’Avolas are far removed from the much riper, tomato and anchovy-laced Nero d’Avolas made from grapes grown in, for example, lower-lying seaside vineyards.

The Nero d’Avola Lagnusa is a single vineyard wine. Lagnusa in Sicilian dialect means “lazy”, referring to lazy or poorly productive soils, as the Lagnusa vineyard is always characterized by low yields. The vineyard is planted at 600 meters above sea level and has a mainly eastern exposure. It is made up of two plots of 30 year-old vines, estate massale selections (from the older Vrucara single vineyard) and planted on dark clay-sandy soils on 140 Ruggeri rootstock. This wine was called simply Nero d’Avola from 2000 up until the 2009 vintage. In 2010 the name Vigna Lagnusa was added. Since the 2012 vintage, the wine is simply called Nero d’Avola Lagnusa. 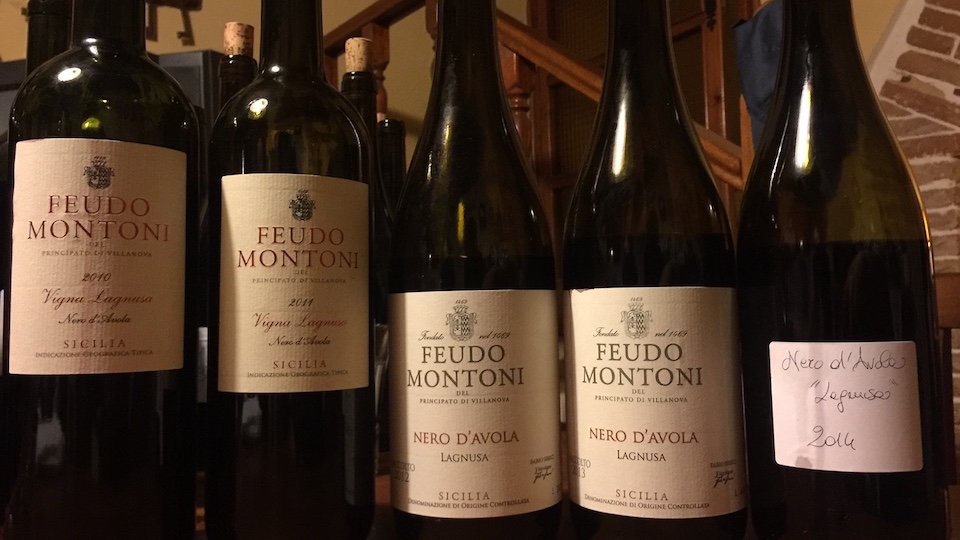 The must spends roughly 15 days on the skins, with fermentation temperatures that rarely reach 30°C (for the most part temperatures range between 26-28°C). Sireci has been decreasing use of oak over the years, so while the wine has always been aged mainly in cement (up to twenty months), it once also spent another eight months in used barriques and tonneaux. Gradually, the oak aging has been reduced to four months (and Sireci’s goal is to stop using it altogether). Lagnusa is a bright, fruity Nero d’Avola that always exhibits the variety’s perfumed, bright violet quality, with ripe but fresh, vibrant black and red fruit aromas and flavors complicated by minty herbs and spices. Lagnusa is all about pure and precise Nero d’Avola fruit, with no camouflaging oak or vanilla nuances at all. And though there is a common thread identifiable in all the Lagnusa vintages, the wine strikes me as changing noticeably with the 2013 vintage, most likely because it is the year in which only whole clusters, natural indigenous yeasts and less oak were used for the first time.

Feudo Montoni’s greatest wine is the Nero d’Avola Vrucara, a single vineyard wine made from roughly 80-100 year-old vines that grow at 500 meters above sea level. Most of the vines are of pre-phylloxera origin, and are therefore ungrafted. The vineyard’s name derives from the Sicilian word vruca, a local herb that grows in the vineyards and exudes aromas of menthol and incense. The Vrucara vineyard is especially beautiful, a field of gnarly, very thick trunked and low-lying bush vines hugging the dark mainly clay soils (with a little loam and sand). Vinification is, like with the Lagnusa, very traditional. The must is kept 25 days on the skins with temperatures allowed to creep up to as high as 32°C. Alcoholic fermentation and malolactic transformation are carried out in cement vats. 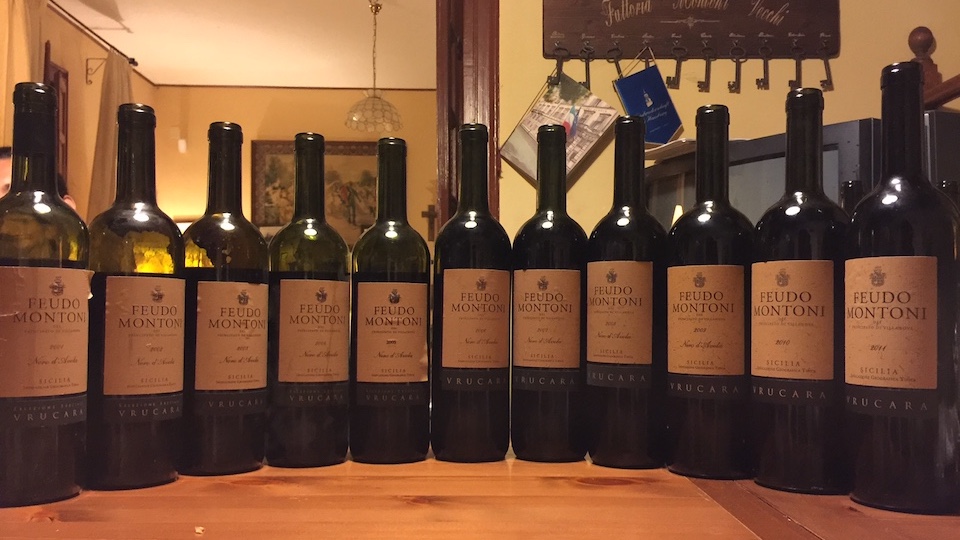 The wine ages anywhere from 45 to 48 months in cement, plus another 6 months in barriques and tonneaux (up to 10% of which are new every year). The first vintage was 1998. Back then the wine was called “Selezione Speciale Vrucara”, and it remained so until the 2005 vintage when the current name was first used (for a reason that Sireci himself cannot explain, the 2003 vintage was labeled only “Vrucara”). At its best, Vrucara is a benchmark Nero d’Avola, eschewing the vanilla notes of more modern interpretations of Nero d’Avolas, while offering multilayered violet, blueberry, macerated red cherries in alcohol, tar and spicy aromas and flavors, with a characteristic hint of eucalyptus and incense.

The following wines were sourced directly at the winery and tasted in Sicily in September 2016. 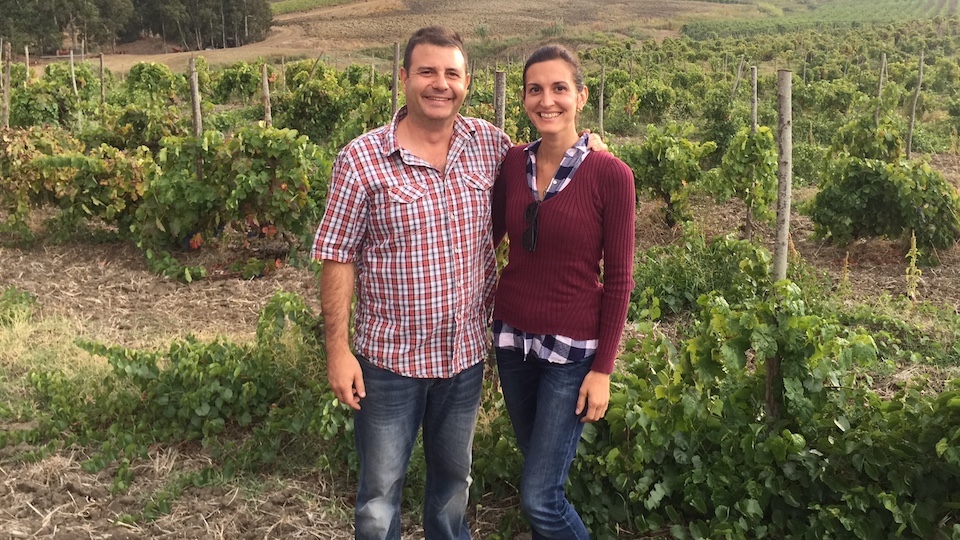