I have always enjoyed Francesco Rinaldi’s single vineyard Barolos, both of which are made from two of the denominazione’s greatest sites, Brunate and Cannubi.

The estate owns 2 hectares in Brunate, a cru situated mainly in the La Morra township but that spills over into the Barolo commune. Rinaldi’s Brunate parcels (for a total of 0.8 hectares) are ns.375, 376 and 377 in La Morra, while parcels ns. 2, 3 and 224 are in Barolo (and extend over 1.2 hectares). Nebbiolo was planted on this southeast-facing slope in 1979 and 1981. 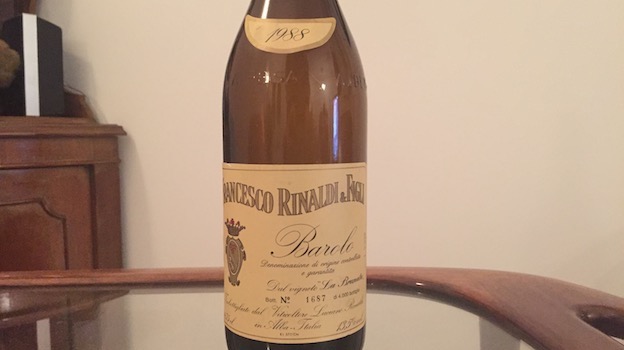 The Rinaldi family long referred to their Barolo Brunate as “La Brunata” (with a final ‘a’) because that is the name of the farmhouse in the vineyard that Giovanni Rinaldi first bought back in 1936. More recently, the vineyard name has been harmonized under Brunate according to the official MGA (Menzioni Geografiche Aggiuntive that were established in 2011.

Rinaldi’s 1988 Barolo La Brunata is a gem. Slender and precise in the style of the vintage, this mid-weight Barolo has aged exceptionally well, which is not always a given with other 1988 Barolos. It still shows lovely clarity in its perfumed, fresh red berry and cherry flavors, all of which are  complicated by spice and autumnal nuances. The 1988 is a lovely Barolo that is drinking beautifully today, but that can also hold on for at least a few more years. 93/Drinking window: 2017-2023.