Piedmont has so much to offer the curious wine lover. Barolo and Barbaresco are now firmly established among the world’s greatest reds. Alto Piemonte has made huge strides in recent years. But there is so much more to Piedmont beyond those famous appellations and wines. In the hands of the best growers, Dolcetto, Barbera, Langhe Nebbiolo and Piedmont’s other reds and whites deliver the same qualities that have made the region’s top bottlings so coveted. These are artisan wines from family-run domaines that convey a sense of place.

As a young student with no money but a big passion for wine, one of the early lessons I was taught was simple but powerful: “Buy the least expensive wine from the best producers.” That lesson has stayed with me, even after all these years. To me, the sign of a top domaine is that every single wine is superb in its peer group. That’s what readers will find in this article. I tasted many hundreds of wines for this report, about half of which did not make it in. Sadly, there is a lot of innocuous Dolcetto, Barbera and Langhe Nebbiolo out there, some of it made by some pretty well-known estates. Not all producers pay attention to their entry-level offerings. Those that do turn out gorgeous wines that deliver immense pleasure with all of the personality of the top bottlings. best of all, most of these wines remain very affordable. Of course, there are some exceptions, but they are the exceptions and not the rule.

There is a lot to be said for the classicism and old-world soul of a fine Dolcetto. Of all of Piedmont’s red varieties, Dolcetto has fared the worst, as it is seriously out of favor with consumers. Dolcetto is also a fickle variety that does not respond well to sudden changes in climate or the shock events that are increasingly common in today’s world. As a result, Dolcetto is disappearing from the hills of the Langhe. That is quite remarkable, considering that in the 1950s/1960s a hectare of Dolcetto was worth the same as a hectare of Nebbiolo for Barolo and Barbaresco!

Barbera is known for yielding rich, sumptuous wines with plenty of forward fruit and more exuberance than Dolcetto. The traditional rule of thumb was that Barbera did best in warm years because its acidity is naturally high, but in today’s climate the wines can be pretty big in warm, dry years like 2017. Nevertheless, Barbera offers tons of juiciness and plenty of near to medium-term appeal. Its long-term viability is under threat though, as Barbera is particularly susceptible to mal dell'esca (grapevine trunk disease), a fungal disease that kills vines that has become more pronounced with the warmer winters that are typical today. In general, Barberas from Alba are juicy, plump and luscious, while Barberas from Asti tend to show more savory and mineral notes, along with greater structure. In Asti, Barbera does not compete with Nebbiolo for the best vineyard sites. As a result, the best Barberas from Asti are fabulous wines that develop gorgeous aromatic and flavor complexity over time. 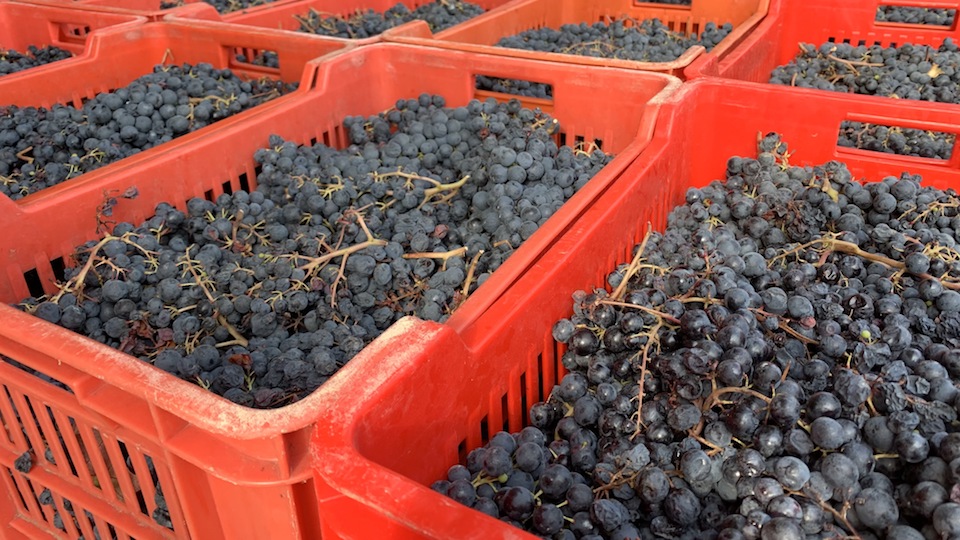 Dolcetto being brought in at Cantina del Pino during the 2021 harvest.

Langhe Nebbiolo and Nebbiolo d’Alba can be a bit confusing for the consumer, as there is some overlap in the production zones. Langhe Nebbiolo is generally thought of as the entry-level wine for Barbaresco and Barolo producers, although its area of production is much larger. Langhe Nebbiolo must be a minimum of 85% Nebbiolo, although in reality most wines are closer to 100%. Nebbiolo d’Alba, instead, is an older denomination with a broader production area that includes all of the Langhe. Wines are required to be 100% Nebbiolo. Generally, Nebbiolo d’Alba is not as highly regarded as Langhe Nebbiolo, as a category. The wines themselves can be everything from simple Nebbiolos given a short extraction and short aging, all done to emphasize fruitiness, or casks of Barolo or Barbaresco that are simply bottled with less time in wood to qualify for the more important designations. Cigliuti and La Ca Növa are good examples of the latter.

Freisa, Brachetto, Grignolino, Arneis and a host of other indigenous (and sometimes international) grapes give the adventurous wine lover plenty to discover. One trend I am not a fan of is the recent infatuation over Timorasso. The production of this at times rustic, native white grape is, in my view, best left in the hands of the local producers, growers who know what to do with it. To be sure, the finest examples can be compelling. But they are the exception. Why producers in Barolo and Barbaresco, who have some of the world’s greatest vineyards in their backyards, would bother with what is, quite frankly, a second-class variety is beyond me.

Harvest in Piedmont is generally quite long. Among the main red varieties Dolcetto ripens first, followed by Barbera and then Nebbiolo. This sequence over time means that the style and quality of vintages can be quite different for each of these varieties. Thus far I have only tasted a few wines from the 2020 vintage, but those that I have show a bit more flesh and radiance than their 2019 and 2018 counterparts. I will have more to say on 2020 later this year. Two-thousand nineteen is a generally cool year. The Dolcettos and Barberas can be a bit light (not as light as the 2018s) because heat arrived too late for them, while the vintage looks quite a bit better for Nebbiolo. Generally speaking, 2018 is a warm vintage marked by irregular ripening. Hail was a major issue in Barbaresco. Another challenging aspect of 2018 is that summer nights never cooled off, which is such an integral part of ensuring even ripening. As a result, some wines are light while others feel a bit clunky. It’s a vintage where selection is essential.

How I Tasted the Wines

This article is the result of two years’ worth of tastings. I tasted last year’s releases at home in New York during the pandemic. Because of the complexities surrounding the world and our work last year, I was not able to publish reviews for those wines sooner. I tasted this year’s entry-level releases from producers in Barbaresco in September. This second installment (producers linked below) covers wines I tasted in Piedmont in November 2021. The focus on that trip was producers in Barolo, plus highlights from Roero and Asti.