Grignolino is one of Italy’s most underrated varieties, and so are its wines. The grape and its wines were historically famous and exceptionally popular as they were much sought-after in Italy as recently as the late 1970s. Soon thereafter Grignolino fell on hard times, when practically black, high-pH, overripe and obviously sweet red wines became, the desired norm. Happily, most fads are short-lived, and when people began to realize that sweet, high-alcohol and generally overripe reds made for very poor company at the dining table, it was time for light and medium-bodied wines to have their turn in the sun once again. 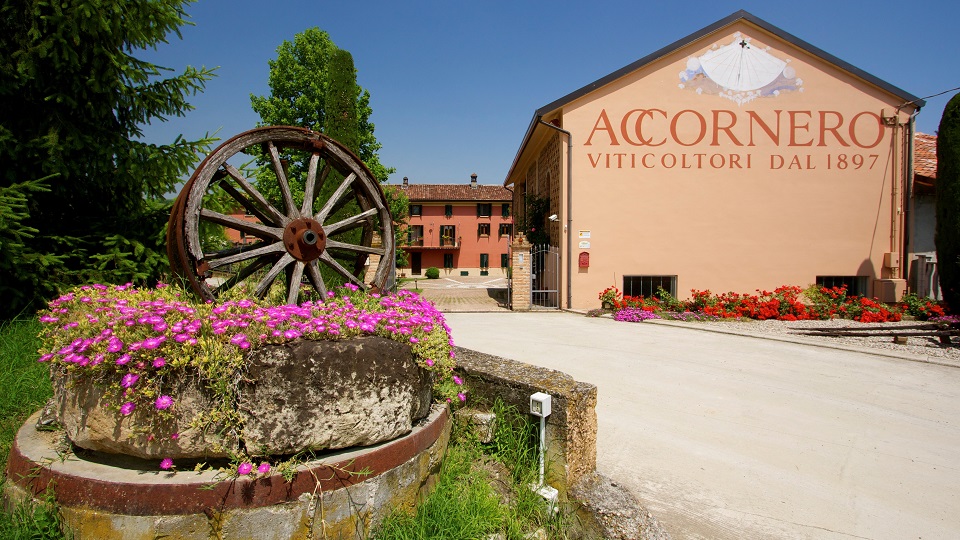 The entrance to the Accornero estate

Grignolino is characterized by dark pink to pale red hues (often with orangey tinges), high tannins, bright acids and mostly floral aromas and flavors with little in the way of obvious fleshy fruit. In fact, such lighter-styled wines (or the best examples, at least) offer brilliantly balanced drinking experiences that are remarkably complex, food-friendly and ageworthy. Grignolino is the poster child of a specific group of  “less is more” grapes, a point underscored by what is arguably Italy’s best Grignolino, Accornero’s Grignolino del Monferrato Casalese Bricco del Bosco Vigne Vecchie. 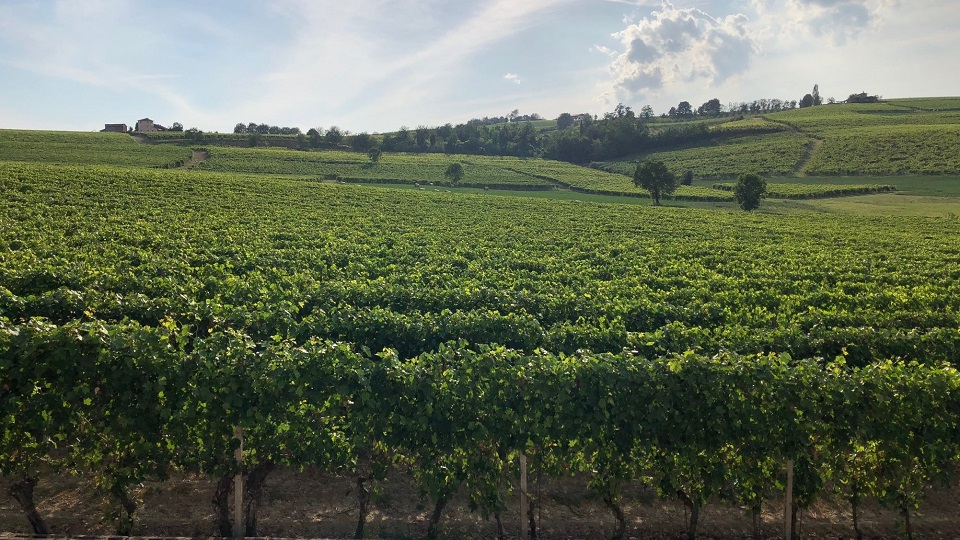 Understanding the Grignolino Grape Variety and Its Wines

There are three main wines made from Grignolino. The best examples are 100% Girgnolinos but the minimum required by law is 85%: Grignolino d’Asti (usually the lightest and most perfumed of all), Grignolino del Monferrato Casalese (usually bigger and richer) and Piemonte Grignolino (a less famous category, but the wines are often surprisingly good). The Grignolino variety is also (rarely) called by other names, such as Arlandino and Barbesino. “Grignolino” most likely derives either from the Piedmontese dialect word grignole,“grating of teeth,” in a reference to the variety’s high acidity and tannic clout, or perhaps from another meaning of the word, “seeds,” because the grapes contain, on average, more seeds (three) than other varieties (which they usually only have two).

Grignolino is the 11th most planted variety in Piedmont, but at 877 hectares, it’s not far behind the very popular Arneis (947 hectares) in this specific classification (2010 data). Though Grignolino’s hectarage has steadily fallen over the last two decades, signs of an end to this hemorrhage have only recently begun to surface. Grignolino is, in fact, still much more prevalent today in Piedmont’s countryside (especially in the provinces of Asti and Alessandria) than many of the region’s other currently fashionable varieties, such as Erbaluce, Favorita, Nascetta and Ruchè. The downturn in Grignolino’s fortunes is really only a recent event. It is well demonstrated by documentation how Grignolino was a favorite in centuries past of nobles and wealthy families, who much preferred its light-bodied, perfumed, refined wines to the more rustic, coarser reds. In fact, Grignolinos were some of Piedmont’s most expensive and sought-after wines right up to the beginning of the 20th century. 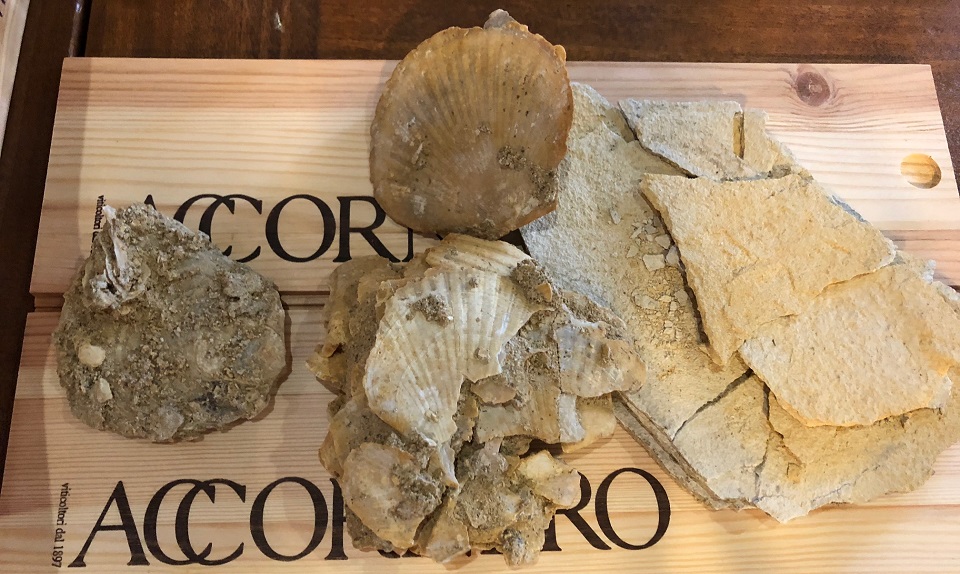 The soils at Accornero are rich in fossils

Grignolino’s fall from grace was not solely the result of a bad fashion trend; the variety has a number of less-than-desirable characteristics that also contributed to its current out of favor status. Depending on the clone or the biotype, Grignolino can have very long, large, rather compact pyramid-shaped bunches. The compactness makes Grignolino prone to rot. For this reason, the grape requires good ventilation; add the fact that it also loves sunlight, clearly Grignolino needs to be planted in top-quality sites. Such locations are precisely the spots where producers choose to plant Nebbiolo (for obvious reasons), this explains why plantings of Grignolino in the Langhe have essentially gone the way of the dodo, the brontosaurus and the archaeopteryx. Grignolino is also prone to just about all the grapevine diseases, which makes producing wine that much more of a challenge. (It is especially susceptible to esca– a real tragedy, for many of Piedmont’s oldest and most beautiful Grignolino vineyards have been wiped out by this veritable plague over the last decade or so.) Last but not least, Grignolino is characterized by asynchronous maturation, especially when yields are allowed to creep upward. Come harvest time, those many different-colored grapes of varied ripeness levels within bunches require very time-consuming, tiring and expensive hand sorting, something not all wineries are especially keen to get involved in. The winemaking doesn’t get any easier. Though Grignolino has pretty blue grapes that are not especially pale (it is always a surprise to those familiar with the light pink wines that typify the variety), it gives up its pigments with difficulty. Extended skin contact risks leaching out the variety’s not exactly shy tannins, making for a head-scratching winemaking conundrum.

For all the difficulties and headaches it presents, or perhaps because of them, Grignolino and its wines are loved by large numbers of enthusiasts. When producers get it right, the wines offer a panoply of perfumed aromas and flavors, a complex spectrum ranging from rose hips to cinnamon to red berries to nutmeg to red cherries to soy sauce to flint to violet to white pepper to orange zest, and a whole lot more. And with people looking for lighter-bodied, svelte wines to pair with their locally sourced, less heavy-handed food preparations, Grignolino’s popularity is undoubtedly on the rise. I have routinely found over the last five years that at wine tastings everywhere, Grignolinos almost always emerge as the second or third favorite wine of the night. Though it is still relatively unknown, and a hand-sell for most somms in fine dining establishments, I am glad to report that the numbers of the Grignolino “squadrons of the faithful” are blooming year after year. 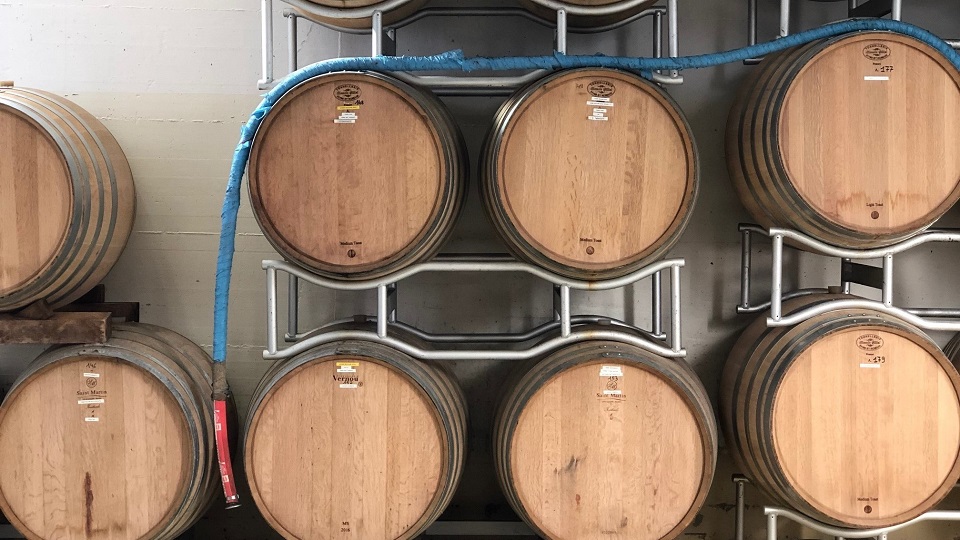 Bricco del Bosco Vigne Vecchie is a Grignolino made in the historic, traditional style, aged up to two years in oak, and quite ageworthy

The Accornero Estate and Its Grignolino

The Accornero estate was founded in 1897 but entered the modern winemaking age with current owner Ermanno Accornero’s father Giulio, who started making wine in the mid-1950s. In the beginning, besides raising farm animals and tending to other crops, Accornero sold mostly bulk wine, limiting himself to bottling only small amounts for his best, most faithful customers. At that time the family owned only five hectares of vines, mostly Barbera, with 0.5 hectares planted to Grignolino. Giulio’s two sons, Massimo and Ermanno, started taking part in running the winery by the end of the 1970s and early 1980s, and focused on estate bottling. Massimo is no longer with us, but Ermanno is still at the helm today, assisted in winemaking by star-consultant Mario Ronco, who also helps make the small-lot Grignolinos of many local estates, and is also very well regarded for his high-quality, large-volume bottlings from Sicily’s famous Cusumano winery.

Accornero is located in Vignale Monferrato, a commune that is essentially one big Grand Cru area for Grignolino. Today the estate boasts 30 hectares, of which 25 are planted to vines. Of these, 4.1 hectares are of  Grignolino, divided among the 2.3-hectare Bricco del Bosco vineyard (five plots planted in 1980) and the 1.8-hectare Vecchia Vigna (four contiguous plots, planted in 1961 and 1971). The soils are mostly friable and marly-tufaceous in nature (with some loam and sand) and have a sub-alkaline pH. Grignolino likes poorly fertile soils such as these. Combining the variety with Paulsen and Du Lot rootstocks helps curb the variety’s natural tendency for high vigor. At Accornero, green harvests are performed when necessary (the aforementioned asynchronous maturation normally leads to a green harvest at veraison). The estate makes two Grignolinos, the entry-level and truly outstanding Grignolino del Monferrato Casalese Bricco del Bosco, from the younger vines and made with no oak aging, and the oak-aged Grignolino del Monferrato Casalese Bricco del Bosco Vigne Vecchie, made from the oldest vines, the ones planted back in 1961 and 1971. The 1961 Grignolino vines are located right next to the 1971 vines, but were bought by Accornero only recently, in 2015; hence, the fruit from those almost 60-year-old vines was used to make the Vigne Vecchie bottling starting after that date. 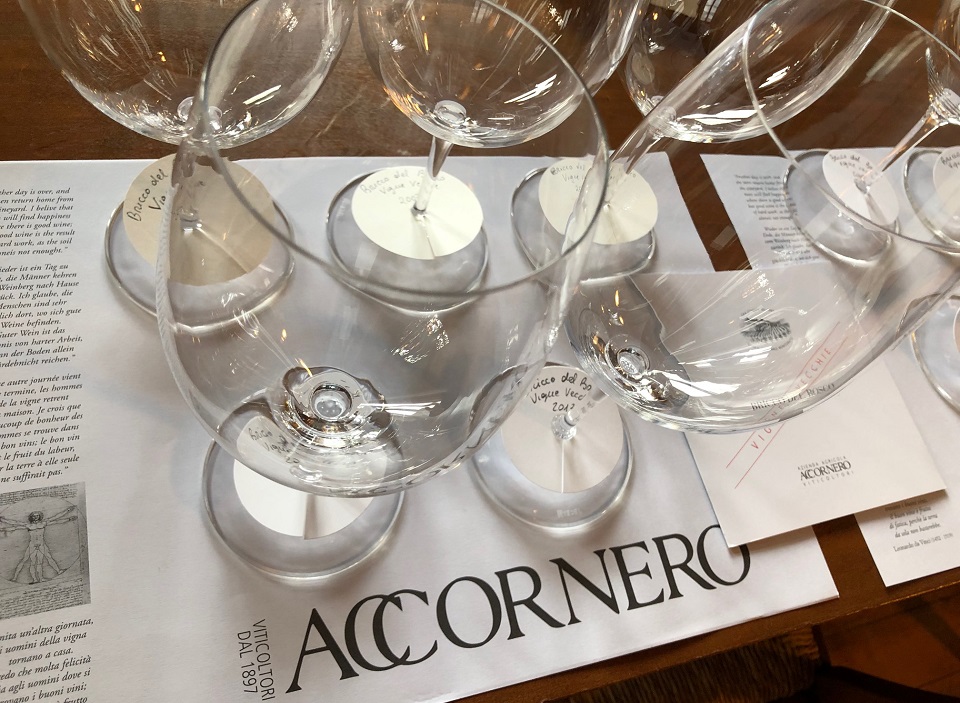 Getting ready to taste through the vertical

Accornero produces roughly 110,000 bottles of wine per year; of these, 12,000 are of Grignolino Bricco del Bosco and 2,500–3,700, depending on the vintage, of Vecchie Vigne. Today, it is not unreasonable to consider each of these two wines to be either the best Grignolinos made in Italy, or at the very least, among the top three wines in each category.

Although I absolutely adore the entry-level Bricco del Bosco (one of my half-dozen favorite light-bodied Italian wines of all time), it is the Vigne Vecchie that is a unique wine, of which I have never had a bad vintage. It boasts all the characteristics that make Grignolinos so endearing, but kicks them up a notch or two. The Vigne Vecchie is a bigger, deeper wine than the Bricco del Bosco tout court, medium-bodied and very refined but mouthcoating in its rich fruit and tannic presence, a wine brimming with ripe red cherry, sweet spice and floral nuances that linger long on the aftertaste. Accornero has tinkered with his winemaking over the years, in order to achieve the most ageworthy Grignolino possible. For example, he now uses increasingly longer macerations and fermentations. From 2006 - 2008, macero-fermentations lasted roughly three weeks, but since 2009 these increased gradually, reaching up to two months with the 2013 and 2014 vintages (there is now two months’ worth of skin contact, using the old cappello sommerso technique with wooden staves keeping the cap down in contact with the must). The wine ages 30 months in tonneaux (of which roughly 60% are new, the percentage of new oak changes depending on the vintage characteristics). I wonder how many readers ever imagined a Grignolino that could spend two years or more in oak and still taste of anything else; and yet, therein lies the magic of the Bricco del Bosco Vigne Vecchie, a wine in which the fruit always sings loud while oakiness is never much of an issue. 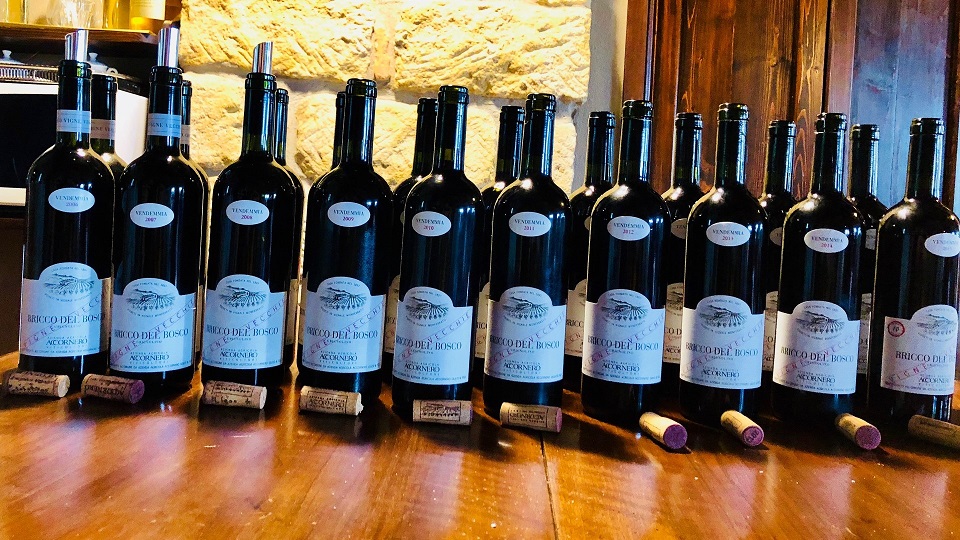 The first-ever tasting of every vintage ever made of the Bricco del Bosco Vigne Vecchie. The wines were tasted non-blind directly at the Accornero estate in May 2019 in the company of Ermanno Accornero and Mario Ronco

Accornero first made the Grignolino Vecchie Vigne in 2006, but had wanted to make an oak-aged, ageworthy Grignolino as far back as the 1970s. He was always very aware that local old-timers believed most Grignolinos were being drunk much too young, and that the wines come into their own at three to four years. But at that point in time nobody aged Grignolino wines at all, preferring to bank on the easygoing, addictively perfumed charms of the steel-aged versions. Accornero knew this meant missing out on showcasing the Grignolino variety’s full winemaking potential; after all, it couldn’t be an accident that all the wines that had reaped important awards and medals in centuries past were oak-aged. And so, in 2006 he took the plunge and made his first oak-aged Grignolino (releasing it only in 2011); the rest, as they say, is history.