We don’t often think of Barbera as a wine that requires a decade or more to reach peak maturity; but then again, most Barberas don’t possess the potential to even last that long. However, when they can and they do, it’s a very special thing.

Let’s remember that there was a time when Nebbiolo wasn’t king, and producers worked hard to move their stocks of Barolo. Back then, vineyards were planted widely with Barbera and Dolcetto, often taking advantage of better exposures and elevations – parcels that are now prime real estate for producing Barolo and Barbaresco. There are still a few tiny pockets of great terroir hosting older vines to be found around these two famous towns, but they are tiny, limited and pricy to match. That’s why we need to look to the place where Barbera is thought to have originated, and where it still receives the most attention, the higher elevations and the best exposures: Monferrato, and more specifically, Nizza.

Nizza, which up until 2014 was part of the Barbera d’Asti DOCG, is primed for the production of world-class Barbera with fantastic aging potential. When tasting, the first thing you’ll notice is a higher level of acidity, but also elevated minerality when compared to an average Barbera. Along with the purity and complexity of the fruit, these elements can create wines that will mature wonderfully in the cellar – but also won’t break the bank.

This is how I came to be a lover of the Vietti Barbera d’Asti La Crena. It’s a wine that can easily reach its tenth birthday before truly showing its potential and then continue to drink beautifully for many years to come. To this day, I look back at my remaining bottles of the 2006 and 2007 vintage and lament that those cases aren’t still full. However, this evening was about checking on the 2012, which I haven’t tasted since it was first released. To say that I was impressed would be an understatement. 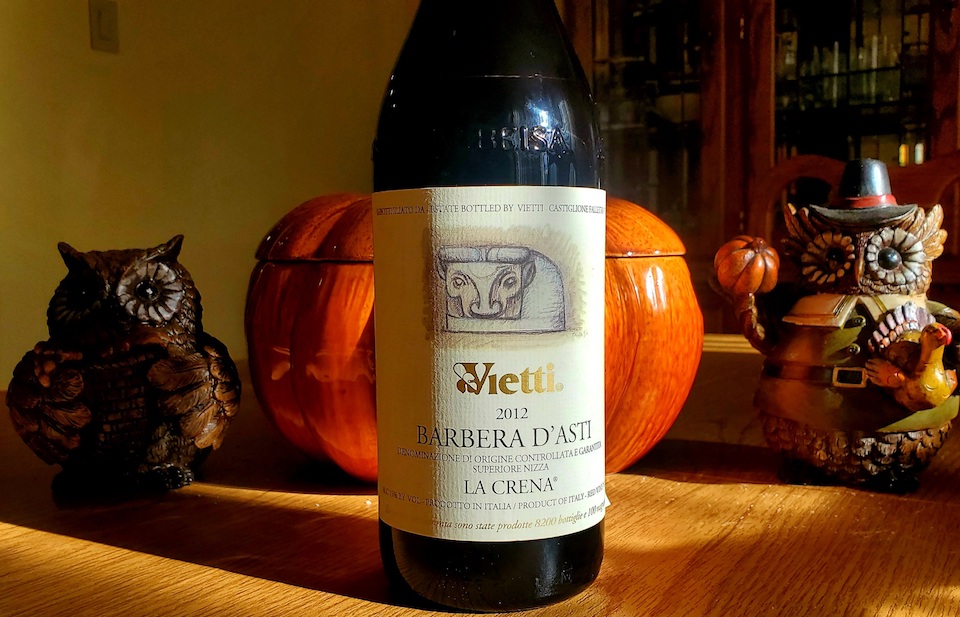 The 2012 Barbera d'Asti La Crena is dark and rich, with a dusting of sweet minerals that I fondly associate with fruity childhood vitamins, giving way to spiced black cherry and crushed blackberry, offset by deepening notes of sage, rosemary and dried flowers. Fleshy textures are contrasted with tart cherry on the palate, where zesty acids and bitter herbs add tension; yet there's also an inner sweetness here that soothes, just as residual tannins begin to clench down, leaving notes of licorice and black tea on the finish. Wow. The 2012 La Crena is in no fear of decline; in fact, it has easily another five or more years of positive evolution. 94/Drink 2020-2030.