A door to another time in Piedmont opens with the 1970 Barolo, a wine made by Battista Rinaldi long before his son, Beppe, ran the winery and well before his granddaughters, Marta and Carlotta, were even born. It was a time of extreme poverty in the Langhe. Families struggled to survive. Barolo was an obscure wine by any measure. Sort of like the holiday spice cakes relatives give to each other but that no one ever eats. It’s hard to believe, but up until at least the 1950s, land prices for a hectare of Dolcetto and Nebbiolo for Barolo were roughly equivalent!

Nineteen seventy is an under the radar vintage for Barolo that has lived under the long shadow cast by 1971, one of the greatest vintages of all time for the Langhe. But there are some jewels in 1970, including the Mascarello Monprivato (its first vintage), the Conterno Monfortino and a number of wines from Bruno Giacosa that, sadly, I have not tasted in some time. (As a side note, some of the other epic wines for 1970 babies are Latour, Petrus, Vega-Sicilia, Cristal and the Ridge Cabernet Sauvignon, which is Monte Bello, but not labeled as such.) 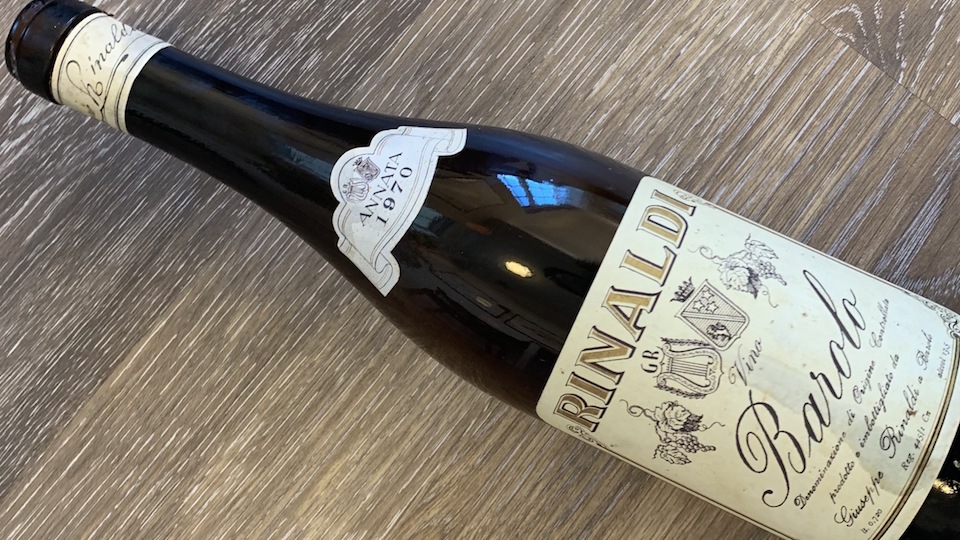 Trying to reconstruct the history of the 1970 Rinaldi Barolo is next to impossible, as no records exist of what fruit was used where. Carlotta Rinaldi told me that her grandfather Battista almost certainly used fruit from Brunate and Le Coste. There may have been outside grapes purchased as well. I remember Beppe Rinaldi telling me his father used grapes from all four sites blended together for a single wine, so there may be some Cannubi (San Lorenzo) and Ravera in here as well.

At first, I am shocked by the wine’s sheer richness and concentration. The intensity of the flavors is unreal. Iron, smoke, tobacco, leather, game and incense all lend gravitas to this decidedly potent, virile Barolo. I find it pretty difficult to assign a rating to a wine like this. Objectively, the aromatics are more forward than the palate impression. The 1970 is certainly not going to get better with more time in bottle. On the other hand, it is a minor miracle wines from this era have survived to the present day at all given that they were never prized up until 15-20 years ago, maximum. Readers lucky enough to come across the 1970 Rinaldi will be drinking more than just a wine. This bottle represents the history of one of the great families of Barolo and artisan values that are increasingly rare in today’s world. 93/Drink 2021-2026.