This German Trockenbeerenauslese (TBA) appeared at the end of a La Mission Haut-Brion dinner a few months ago, and to be honest, though it was love at first sip, at the time I did not truly appreciate its rarity. TBAs with decades of bottle age are few and far between, and when they reach ethereal heights, as they did on this occasion, then it is truly a memorable experience. 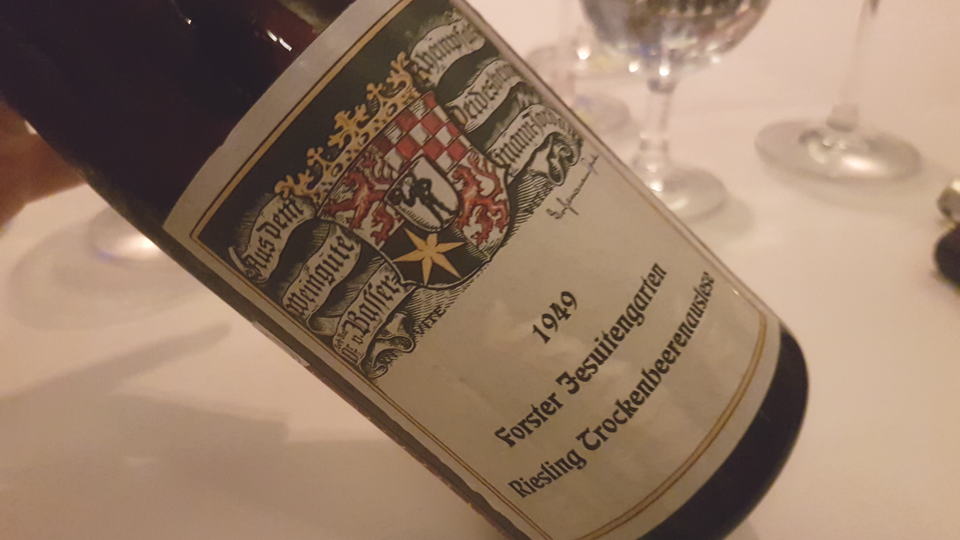 This example from Dr. von Bassermann-Jordan comes from the 1949 vintage and was rated five stars by the late Michael Broadbent. In his Vintage Wine tome, Broadbent mentions that by 1949, many of the German vineyards had recovered from the war, enabling them to exploit this idyllic growing season. The 1949 was so deep in color that I momentarily feared it was long past its best. However, upon inhaling the aromas wafting from the glass, I knew that I was in for something special. The bouquet is both intoxicating and profound, offering California raisin, hoisin, grilled almond and even melted chocolate at first, and then raspberry preserve and wilted rose petals, all beautifully defined and focused. The purity of these aromas is just off the charts. The palate is so perfectly balanced that the residual sugar is hardly noticeable. Velvety-smooth in texture, the 1949 offers marmalade and dried apricot and develops a finish that is not far removed from a Mondeuse. Its weightlessness makes this TBA truly ethereal, and its length is quite phenomenal. The fact that it will last a century is not in doubt as far as I am concerned; the pertinent question is, for how many years after that will this elixir give so much drinking pleasure? Astonishing. Flirts with perfection. 99/Drink 2020-2050.