Where the Wild Things Are: Welcome to Sardinia

Sardinia can almost seem like a country, or even a continent unto itself. The island covers 9,300 square miles; and with a 125-mile separation from the mainland, when touring its diverse terrain, listening to its own dialect and taking in the regional flavors, it would be easy to forget that you are indeed in Italy.

This is a paradise island of extreme climatic differences from north to south, as craggy rock-faced coastlines give way to flat plains, then to mountains and back again to sandy beaches. The warm and dry Scirocco winds blow up from the deserts of Africa, as cooling currents flow down from the island’s higher elevations. In the north, it’s the strong and cold Mistral winds, blowing down from the south of France, which batter the coastline and mark its vegetation. These two fierce currents are the reason for the low-trained bush vines that Sardinia is known for. This island of light is also a strategic location, a launching point between western Europe, Italy and Africa, one which has inspired empires and conquerors to invade and occupy Sardinia for thousands of years. The Phoenicians, Romans, Arabs, Aragon and even Popes all traveled across the Sea to Sardinia to exploit and rule, yet the people of this island endured. Oftentimes it would be a retreat into the more wild, rugged and mountainous locations, which has had a large effect on both the food and wine of the region.

Being an island, you’d expect to find a heavy influence of fish and seafood, yet you’d be wrong. Instead, this is a region whose foods are based more on mountain cuisine and shepherds’ fare; as a result, their wine is often produced in a style to pair with these rich and hearty dishes. That’s not to say that Sardinia is absent of fresh fish and seafood; it’s simply not their personal preference, and it’s more aimed at the countless tourists that flood their beaches, bays and the paradise created by the resorts along the Emerald coast (Costa Smeralda). You certainly can’t go wrong with a Muggini in Teglia (mullet in olive oil and vinegar), Sardine al Pomodoro (sardines in tomato sauce), or rock lobsters tossed with spaghetti, when paired with the island’s rich and sumptuous Vermentinos or the high-acid Nuragus. 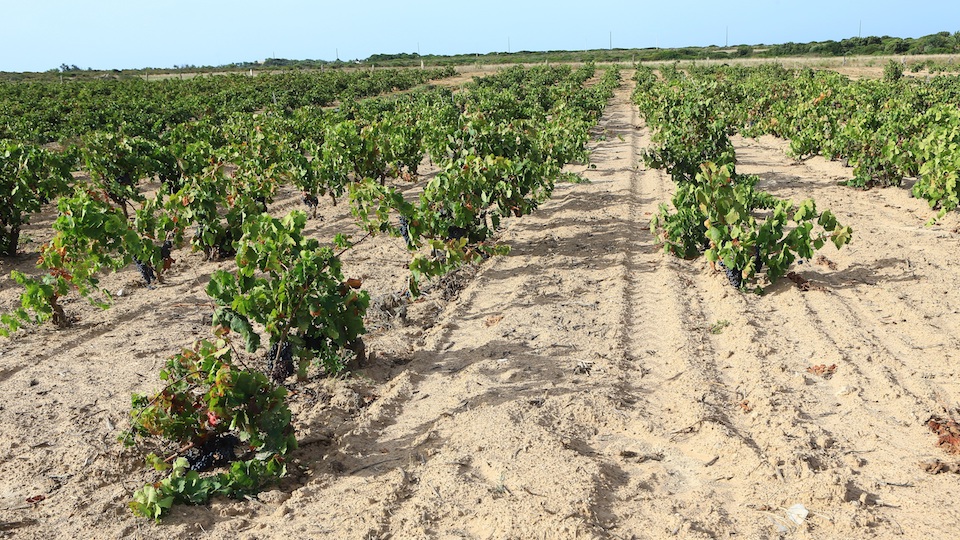 While the dizzying mix of grape varieties found throughout Sardinia are often referred to as indigenous, the reality is that the majority of them were imported over the course of millennia, primarily from the Iberian Peninsula. However, their names and even the styles of wine they create are vastly different.

Among reds, the most well-known grape is Cannonau, a biotype of Garnacha or Grenache, also referred to as Alicante on the Tuscan coast. This variety can be found throughout the entire island, produced under the all-encompassing Cannonau di Sardinia DOC. However, it’s from the Barbagia hills, north and east of the Gennargentu Mountains near Nuoro, where Cannonau excels in poor soils of weathered granite. The extreme warmth of the day is offset by the cool, sometimes even cold, evening temperatures, that help to create the best wines. Even here, as well as throughout the entire island, heat, ripeness and high alcohol levels that come along with it, are the biggest challenges Sardinia faces with Cannonau. As for the other widespread Spanish import of the island, we find quite a few producers with wines that feature Carignano, known as Carunena or Marzuelo in Spain, as well as Carignan in the south of France. It’s in the extreme southwest of the island in the Carignano del Sulcis DOC where dark, mineral and violet-tinged expressions emerge, yet with enough primary fruit and structural intensity to warrant medium-term cellaring. In the hands of the right producers, Carignano has the potential to be great; yet through my tastings, I also witnessed many missed opportunities. It’s important to note that quite a few wines list the Bovale Grande variety in their blends, yet this grape has been shown to be Carignano. Staying on the topic of reds brings us to a number of other lesser-known varieties that are worth seeking out. There’s the pretty and bright Monica with its sneaky structural heft. The spicy, full-bodied Cagnulari, a specialty of northwest Sardinia, also referred to as Bovale Sardo, is believed to be related to Spain’s Graciano. Yet very little makes its way off of the island. (In fact, I was able to taste only two of these for this report.)

Vermentino is, without a doubt, Sardinia’s most important white wine as it’s the variety that keeps the island on the map with wine consumers around the world. While the grape is permitted throughout the entire region under the Vermentino di Sardinia DOC, its best source is from the northeast in Sardinia’s only DOCG, Vermentino di Gallura. Vermentino does well in Gallura’s poor sandy and rocky soils, with warm Mediterranean influences balanced by the cooling currents of Sardinia’s interior overnight. It would be easy to say that focusing on the Vermentino di Gallura DOCG will lead to the top wines, but looking through the reviews in this article reveals that wines from throughout the island did well. The biggest challenge that the region faces with Vermentino is its expanded planting in locations that turn out simple, overly ripe wines that lose their balance of acidity and minerals under a layer of tropical fruit. While consumers can easily find highly quaffable and affordable wines, locating a great bottle of world-class Vermentino that can thrill you today but also mature into something special over medium-term cellaring is nowhere near as easy. Wines such as Pala’s Vermentino Stellato Nature, from the all-encompassing Isola dei Nuraghi IGT, Mesa’s Giunco, from the Vermentino di Sardinia DOC and Tenute Dettori’s Bianco, from within the Romangia IGT, all showed exceptionally well without depending on the more prestigious DOCG.

Toward the southern end of the island, in the Campidano plains which run from the province of Oristano down to Cagliari, we find another white of note, the high-yielding Nuragus. This is an extremely warm and dry region, quite Mediterranean in climate, which is heavily affected by the Scirocco winds blowing up from Africa. Retaining acidity in spite of the region’s temperatures is the biggest challenge, yet when done right, the wines of the Nuragus di Cagliari DOC can be wickedly fresh and minerally intense, making for a perfect pairing with any and all coastal cuisine.

One of Sardinia’s most underrated white wine categories is Vernaccia di Oristano. The immediate response would be to compare these to Vernaccia di San Gimignano, yet they are in fact two completely different varieties and styles. Hailing from the Oristano province on the western, central part of Sardinia, these wines emerge more like a Fino or Amontillado Sherry. This is a result of a long aging process under flor in any combination of different-sized barrels of various wood types, with chestnut being the most common. These are serious wines of meditation which can live for many decades due to the long-lasting controlled oxidation under flor combined with a high alcohol content, typically the result of ripeness upon harvest and the natural evaporation of water during the aging process. Sherry lovers shouldn’t hesitate to explore this category as soon as possible, as the best examples offer notable complexity and value.

Oscar Wilde once wrote, “It is always with the best intentions that the worst work is done.” This quote resonated with me through many of my tastings and interviews. My talks with winemakers would often include descriptions of their methods that would lead anyone to believe that the wines they produce should be fantastic. No need for chemicals or pesticides in the vineyards, spontaneous fermentations, little to no use of sulfur, neutral aging vessels, and on and on - but when tasting the wines, they would be weedy, soupy, rustic or unbalanced, with alcoholic heat showing through. Yet there are standouts and up-and-coming winemakers that really do have the right ideas and deserve your attention. The reality is that Sardinia is still largely a land of cooperatives. The good news is that, overall, the quality produced from these houses remains quite high for their price points. 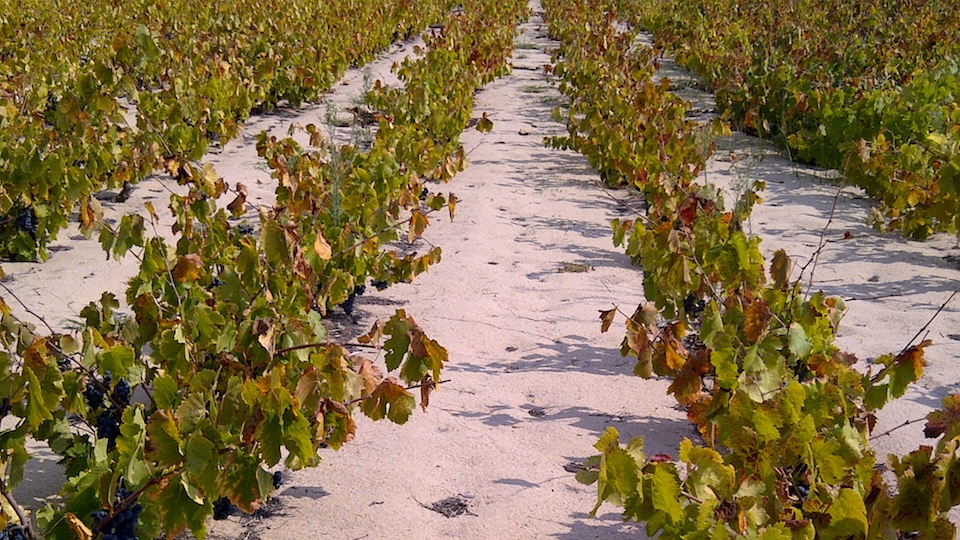 Pala's Terralbese vineyard, with Bovale growing only two and a half miles from the sea, in white sands.

One of the most unfortunate repeating occurrences during my tastings was the high percentage of cork taint. One would think that an island which is known for its large production of cork, mostly focused around the town of Calangianus, on the north end of Sardinia, would make it easy for local producers to source the highest-quality materials for their wines. Unfortunately, this is not the case. In the end, it’s a sad affair, and it’s the responsibility of the producers to demand a better product.

My tastings included wines from 2018 and 2019, two vintages that were incredibly different from one another. My predecessor, Ian D’Agata, wrote in February of 2020, “Sardinia will remember the 2018 vintage as one of the strangest and toughest of recent times.” The reason for this was the combination of heat and a large amount of hail and rain that marked the latter half of the summer and into harvest, causing both dilution in the grapes but also disease and rot amongst the vines. One producer even spoke to me about losing their entire crop to downy mildew. It wasn’t a total loss across the entire island, as I found a number of Vermentinos from the well-ventilated northeast that benefited from extended hang times, presenting a luxurious and elegant, if slightly round, expression. Don’t expect the wines, both red and white, from 2018 to be long-lived.

On the other hand, 2019 was a warm, dry and more balanced vintage with an abundant harvest. Spring and summer were both hot and dry, with rains in mid-August that alleviated some of the stress on the vines, but also forced many producers to pick early-ripening varieties later in the season. Cooler climatic conditions through the fall helped return to a balance of aromatics and acidity. What we can expect are warm-vintage fruit profiles aided by elevated acidity; juicy and balanced entry-level wines that may not be the longest-lived but will provide a good amount of pleasure. As for the higher elevations and poor soils of Sardinia’s interior, that yield the region’s best Cannonaus, the outlook may be even better. A number of these wines showed gorgeous purity and balance mixed with vividly intense red fruit. 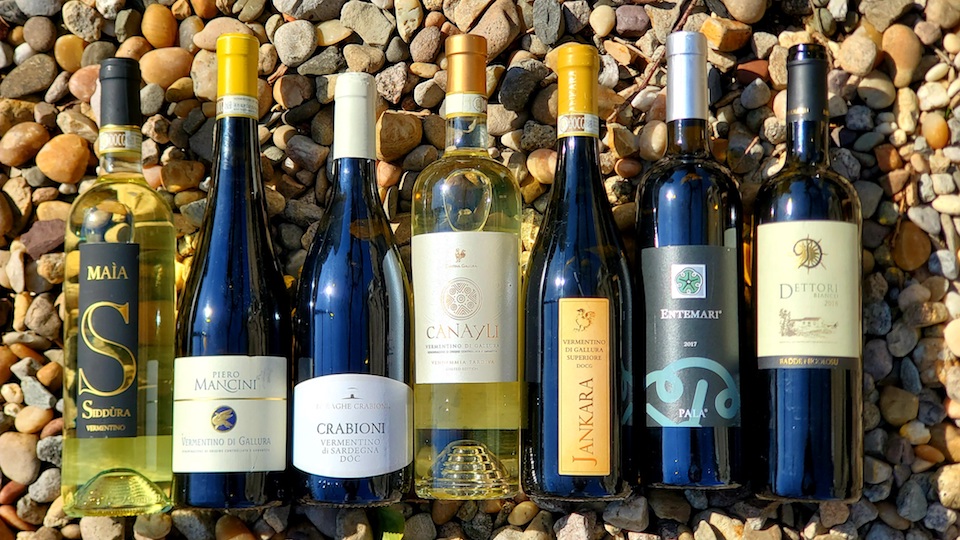 A kaleidoscopic selection of Sardinians whites.

The Good, the Bad and the Ugly

Every region has its standouts, its under-performers and its defective or simply poorly-made wines. There is pleasure and value to be found throughout Sardinia, but you must make informed decisions. While there were some letdowns, there were also quite a few happy surprises, and also a number of truly eye-opening experiences. I, for one, will be keeping my ear to the ground, hoping for a more unified showing of quality down the road.

All wines were tasted in New York between January and February of 2021.

Valpolicella & Soave: The Times, They Are A Changin’, Eric Guido, February 2021