Early on in my travels, I realized that nearly every Italian producer I’ve tasted with admits that their favorite vinous pleasure, aside from their wines, is Champagne. With that said, it is hardly a surprise that this is a country that strives to create its own sparkling wines, both from international and indigenous varieties. And I’m not just talking about the big names of Franciacorta, Trentodoc and Alta Langa, which have gained international recognition. The reality is that new sparkling wines are being discovered across Italy faster than most of us can keep up with. Each year, I find myself looking at new labels and wines from across the boot, and of course, from Sicily and Sardinia too.

When visiting with producers, I’ll often keep an eye open for Champagne-style bottles that might signal the opportunity to taste. One of the most recent head-turning moments occurred in Le Marche at the Garofoli winery with their Sparkling Verdicchio (a wine covered in the article, The Unrealized Potential of Marche). Many sparkling wines are tiny productions or passion projects that never make it out of the winery, often reserved for friends and family. But, when I find one worth hunting for, I take no greater satisfaction than spreading the word. Unfortunately, it’s hard to classify these wines, as they don’t fall into a DOC or DOCG, often labeled simply as Vino Spumante, Metodo Classico or Metodo Ancestrale (both méthode champenoise).

As a result, this has become a very producer-dependent category but possesses endless opportunities. A few examples of standout wines that lack an “overarching designation” but made an impact include: the Metodo Classicos from Parusso in Barolo, Le Chiuse in Montalcino, Marco De Bartoli in Sicily and Travaglini in Gattinara.

The Big Two and the Up-and-Comer

Not long ago, the conversation around Italian sparkling wine made using Metodo Classico (méthode champenoise) would begin and end with Franciacorta. Today, however, we can add Trentodoc and, to a lesser degree but gaining momentum, Alta Langa to that list. All three are located in Northern Italy and share a similar recipe of permitted varieties, with Chardonnay, Pinot Noir and Pinot Blanc allowed in Franciacorta, the addition of Pinot Meunier for Trentodoc, and in Alta Langa, simply Chardonnay and Pinot Noir. The most significant differences between the three are location and experience.

Franciacorta, located in the region of Lombardy, continues to reign from a perspective of overall quality and consistency, but that’s also where experience comes into play. If not for the hard work of its producers marketing themselves and placing the wines in front of consumers over the past 50 years, I’m not sure where Italy’s sparkling wines would rank in the world without that effort, but they certainly wouldn’t be talked about as often as they are today. As I stated last year, it is unfortunate that Champagne is the number-one competitor for Franciacorta. The region is fighting the uphill battle of positioning itself against over 300 years of established branding. It’s a paradox, as the wines of Franciacorta are produced under strict guidelines with lower yields and through the same process as Champagne. The DOCG even requires Franciacorta to mature on the lees for no less than 18 months for non-vintage (it’s 15 months for Champagne), 30 months for vintage and 60 months for the Riserva category before release; and like Champagne, it is not uncommon for producers to mature the wines significantly longer. As for the terroir, it’s an ideal growing location with well-draining gravel and mineral-rich soils, cascading hills, warm summers and cool nights, all moderated by the effects of Lake Iseo to the north. While this sounds like a recipe for success, and the wines continue to impress, Franciacorta remains underappreciated globally. Because of this, it has become one of my favorite wines to bring to tastings and events, as the wines often overdeliver.

As for Trentodoc, located in Trentino, it was widely the global success of one large producer, Ferrari, and their willingness to share the glory that placed this DOC on the map and kept it moving in a positive direction. The story of Ferrari and its Metodo Classico sparkling wines goes back nearly 200 years, when Giulio Ferrari began planting Chardonnay due to his love of Champagne and desire to replicate it. The good news is that the producers of the region continue to push the limits of what’s possible here. Compared to Franciacorta, I find the wines of Trentodoc have a wiry tension and noticeable acidity, making them the perfect palate-cleanser but also ideal with various cuisines. Much of this has to do with the terroir, with the cooling effects of the Dolomites to the north, balanced warming effects of lake Garda to the south and elevations up to 900 meters. The growing area consistently benefits from warm daytime temperatures and significant shifts at night that help to extend the growing season. Its aging restrictions are very close to Franciacorta, requiring no less than 15 months for non-vintage, 24 months for vintage and 36 months on the lees for the Riserva category before release.

Alta Langa has only recently received international recognition; it’s only so long before more sparkling wine drinkers begin to look for the wines. The DOCG was created in 2011, located in the south of Piedmont. There are several differences between Alta Langa and the aforementioned wines (Franciacorta and Trentodoc), the first being the allowance of only Chardonnay and Pinot Noir. However, beyond that, all Alta Langa must be a vintage-dated wine and have spent at least 30 months aging on the lees. The growing area begins in the southern hills of Asti, and vineyards must be planted on hillsides, starting at 250 meters in elevation. The soils here are primarily calcareous clay marls. This is still an incredibly young growing region and needs a true champion. However, many Piedmont producers are happy to create their sparkling wines under the lesser Vino Spumante category to avoid the blending restrictions of the DOCG. Only time will tell. 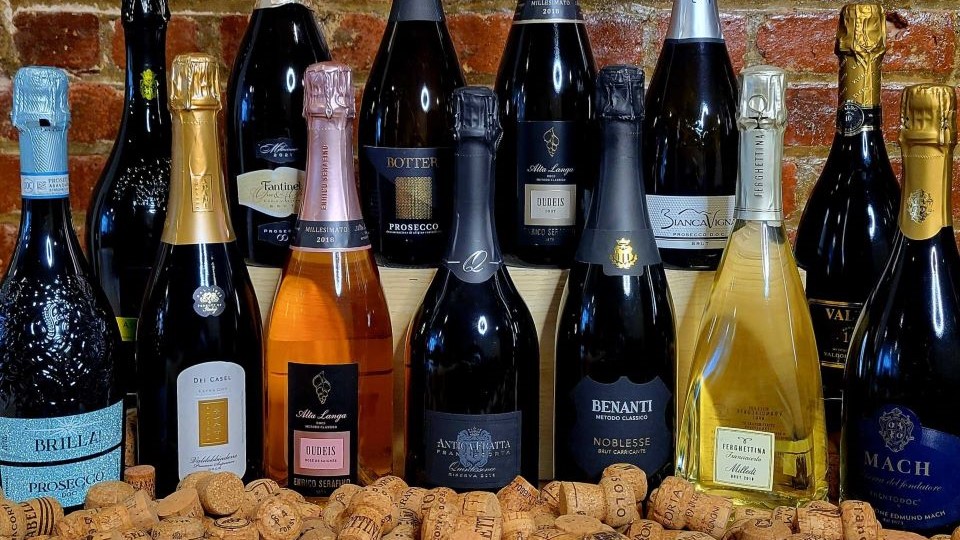 We Should All Be Drinking More Prosecco!

I know it’s a statement that probably surprises most readers. Still, the fact is that Prosecco (made primarily from the Glera grape with up to 15% other white varieties) currently represents one of the top quality-to-price-ratio categories of all Italian sparkling wine. However, I’m not talking about the mass-produced bubbly tank wines that line the shelves of local supermarkets or the door-buster specials at your favorite wine shop. And therein lies the problem.

Prosecco is one of the few categories in Italian wine where the best option for its artisan producers to set themselves apart is by dropping the name of the DOC, which is a double-edged sword. On the downside, the producer would then need to market their product as an unknown Vino Spumante or Metodo Classico (depending on how they produce the wine). Still, on the upside, they are no longer dealing with the bigger problem, the word “Prosecco”. Granted, if you produce a sweet yet fresh and bubbly Prosecco that falls into the $15-$20 range, there’s no issue. However, if you prefer to try to distinguish yourself, your style and your terroir with a wine that doesn’t fit into what the average consumer expects from Prosecco, then it’s a tough road to travel. For these winemakers, the category has fallen victim to its branding. The real shame in this is that a great deal of fantastic Prosecco is being produced today that can compete with the big names of Italian sparkling wine, but how can a consumer tell the difference?

Readers willing to do a little extra work when looking at wine labels can glean a few things from the recent additions of crus and distinctions of location with Prosecco. The creation of the Conegliano Valdobbiadene DOCG and its subzones was a step in the right direction, a DOCG that makes the inclusion of the word “Prosecco” on the label optional. Moreover, a producer can label their wine as either Conegliano, Valdobbiadene or Cartizze (Superiore di Cartizze), depending on their farming subzone. Taking things to a more serious level was the creation of 43 Rive, a designation of crus from the hillsides of Conegliano Valdobbiadene. Another stride was the addition of the Asolo DOCG. This appellation requires the word “Prosecco” on its label and comes from a smaller, hilly area to the south of Conegliano Valdobbiadene. Producers here have been hard at work to establish themselves by creating a more serious Prosecco, often made in an Extra Brut or Brut Nature style, or designated Sui Lieviti (meaning from a single harvest and using a secondary fermentation in bottle with aging on the lees, without disgorgement).

These two designations are a great place to start for consumers looking to experience Prosecco at a higher level. Still, many producers fall outside of these categories and become lost in the ocean of Prosecco that can be made throughout central to northeastern Veneto and in all of Friuli-Venezia Giulia.

It pays to look through the following notes to find these wines because many of them will give readers a total paradigm shift and a new understanding of what Prosecco is capable of. The best part is that the wines are almost always significantly better priced than expected. There’s nothing quite like placing a Brut, Extra Brut or Brut Nature Prosecco into a blind tasting of sparkling wines from around the world and then watching jaws drop at the unveiling.

Lastly, just as a guide to those new to the terms that describe the level of sweetness in sparkling wine, I’m including the following, but keep in mind that the balance of sugar to acidity can play tricks on the mind. For example, one of the most popular categories of Champagne is “Brut”, which can contain up to 12 grams of residual sugar, yet hardly shows it. Moreover, one of Prosecco’s most pleasurable and balanced expressions is often found in the Extra Dry category, which contains around 12-17 grams of residual sugar.

Extra Brut: Between 0-6 grams of residual sugar per liter.

Brut: Less than 12 grams of residual sugar per liter.

Extra Dry: Between 12-17 grams of residual sugar per liter.

Dry: Between 17-32 grams of residual sugar per liter.

Demi-Sec: Between 32-50 grams of residual sugar per liter.

I tasted all the wines for this report in our offices in New York City between October and November of 2022.