This complete vertical of Castello dei Rampolla’s d’Alceo was remarkable for many reasons, most importantly the absolute brilliance of the wines across vintages of all kinds.

Castello dei Rampolla is located in Panzano’s famous Conca d’Oro or ‘golden basin,’ an amphitheater of striking, pristine hillside vineyards. Rampolla’s neighbors include Fontodi, La Massa and Villa Cafaggio. The di Napoli family has owned the property since 1739. Alceo di Napoli inherited the estate in 1965. Shortly thereafter, di Napoli planted Canaiolo, Malvasia, Trebbiano and Sangiovese. At the time, Rampolla was essentially a summer residence. Wheat, olive trees and other mixed crops were cultivated, but there were no vineyards. In the early days, Rampolla sold their fruit to Antinori. In 1975, Rampolla began making their own wines under the guidance of legendary oenologist Giacomo Tachis.

Alceo di Napoli dreamt of planting high-density vineyards with Bordeaux varieties, something that was unheard of in Chianti Classico at the time. In 1988, di Napoli started clearing the land, which at the time was planted with olive trees and housed the property’s stables. Importantly, this land had never been farmed for grapes before, so it was virgin land. The first terraces were planted with Cabernet Sauvignon in 1990. Petit Verdot followed in 1991 and 1992. Sadly, Alceo di Napoli passed away in 1991, but his children Luca and Maurizia stepped-in to run the family estate. In 1994, Rampolla converted to biodynamic farming, the d’Alceo plots have essentially been farmed biodynamically since the beginning, as they had no real previous history to speak of, nor conventional farming regime from which to adjust.

All of the wines in this tasting were frankly stunning, including the inaugural 1996. A stylistic change towards greater finesse is evident beginning in 2001, which coincides with the seventh year of biodynamic farming, one of the first inflection points for followers of that school. By 2004, d’Alceo is even more elegant and polished than just a few years prior.

Today, d’Alceo is 85% Cabernet Sauvignon and 15% Petit Verdot. The first vintages spent about 18 months in French oak barrels. Since 2007, d’Alceo spends 10-12 months in barrel, with only 10-15% new barrels, a decision Rampolla took to preserve more freshness and reduce the flavor impact of oak. In truth, I did not detect any significant or overbearing presence of oak, even in the early years, although the wines are clearly shaped texturally by aging in small barrels. More recently, Rampolla has moved increasingly towards larger 500-liter tonneaux. For more on the history of d’Alceo, readers might enjoy this short video I shot with proprietor Luca di Napoli just after this tasting. Di Napoli discusses biodynamics and other aspects of his approach to viticulture and winemaking here. 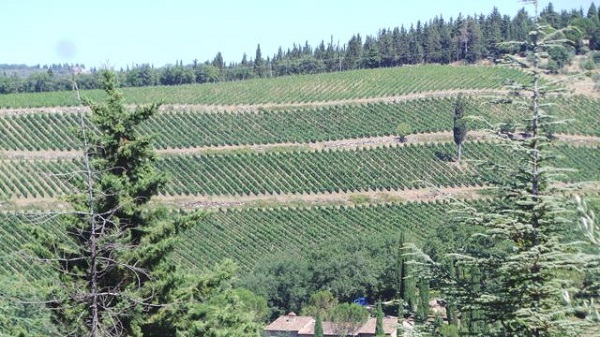 The terraces of the d’Alceo vineyard as seen from Fontodi’s Vigna del Sorbo, Panzano

The 1996 Vigna d’Alceo is just beginning to show the earliest signs of tertiary complexity. Licorice, smoke, underbrush, menthol, plums and dark cherries all flesh out in this beautifully layered, sumptuous Vigna d’Alceo. With some air, the 1996 can be enjoyed today, but it also has the stuffing to age well for another 15-20 years. What a great showing. 97/Drinking window: 2013-2018. Rampolla’s 1997 Vigna d’Alceo is a little more forward and voluptuous than the 1996. Dark red fruit, smoke, tobacco and anise all flesh out in the glass. Incredibly, the 1997 shows tons of Sangiovese-inflected nuances as it opens up in the glass. In keeping with the style of the year, the 1997 is a wine of pure texture. It should drink well for another decade, if not longer. 96/Drinking window: 2013-2023.

Rampolla’s 1998 Vigna d’Alceo is a sexy wine that brings together the dark blue/blackish fruit of the 1996 with the more open, resonant personality of the 1997. All the elements take shape beautifully in the glass in a wine that is peaking today, but also has the depth of fruit to last for another ten years, perhaps longer. The very early faint signs of tertiary complexity are beginning to take shape in the glass. Given its slender personality, my sense is that the 1998 won’t last forever, but it is a very pretty wine to enjoy today. 93/Drinking window: 2013-2023. A towering, majestic wine, the 1999 Vigna d’Alceo bursts from the glass with an exotic mélange of dark red/black fruits, iron, incense and scorched earth. Firm tannins support a huge, explosive finish laced with the essence of sweet black cherries, plums, smoke and licorice.  Still quite young and virile, the 1999 needs at least a few more years in the cellar. If opened today the 1999 will benefit from advance aeration. Readers who own the 1999 should be thrilled, as it is fabulous. It’s as simple as that. 97+/Drinking window: 2015-2029.

The 2000 Vigna d’Alceo is gorgeous. It is also one of the most open, pliant wines in this tasting. Plums, savory herbs, violets and licorice all flesh out in the glass.  Beautifully soft and caressing throughout, the 2000 is a great choice for drinking now and over the next decade. The 2000 is a bit slender next to many of the other vintages, but its balance is exceptional. Sweet, silky tannins round of the finish. 95/Drinking window: 2013-2023. At twelve years of age, the 2001 Vigna d’Alceo remains a behemoth. Even with all of its power, the 2001 is also incredibly elegant, refined and polished. The flavors and textures still haven’t fully filled out, as is the case with the vintages of the 1990s, so readers will have to be patient. Still, all of the elements are in place for the 2001 to be an even more spectacular wine than it already is in another few years. The 2001 isn’t quite as structured as the 1999, but it is a touch more refined and floral. 97/Drinking window: 2016-2031.

One of the unquestioned highlights in this tasting, the 2003 d’Alceo is simply stunning. The personality of this dry, torrid vintage comes through in the wine’s power and voluptuousness, but at the same time, the 2003 boasts phenomenal balance. Ideally, the 2003 needs at least another few years to drop some of its baby fat although it will always be opulent. Tertiary notes are just beginning to develop in a d’Alceo that has developed even better than I envisioned six years ago when I first tasted it. 96/Drinking window: 2018-2028. The 2004 d’Alceo is off the charts. Freshly cut flowers, mint and dark red berries are all finely knit in a fabric of superb elegance and pure pedigree. It is fascinating to watch the evolution of Vigna d’Alceo from a wine of power to a wine of finesse, and 2004 is at the inflection point in that arc. The silkiest and most refined tannins imaginable support an impeccable, layered finish peppered with dark red/black fruit, smoke, tobacco, licorice and savory herbs. Simply put, the 2004 is stunning. 98/Drinking window: 2013-2024. 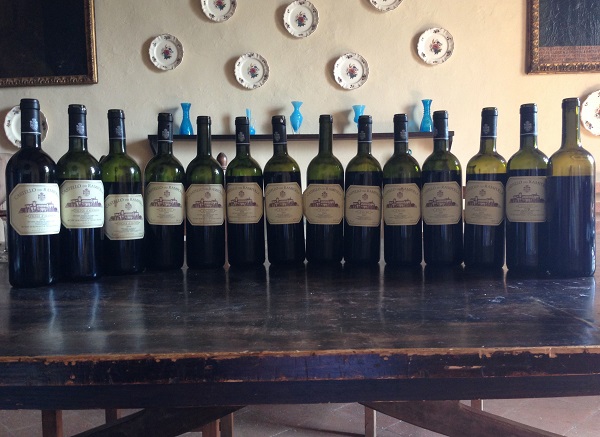 A complete survey of d’Alceo

A wine from one of the most challenging vintages ever at Rampolla, the 2005 d’Alceo has developed far better than I originally envisioned. Freshly cut flowers open up in the bouquet, followed by sweet red berries, licorice and mint, all of which appear to jump right out of the glass. Impeccably perfumed and supple, the 2005 is firing on all cylinders today. With its graceful, medium-bodied personality and compelling balance, the 2005 is hugely appealing today, yet also has enough freshness to continue to develop in bottle for perhaps as long another decade. This is a fabulous showing. The 2005 growing season was particularly complicated at Rampolla because of cold weather and large amounts of rain. The estate only used fruit from the oldest vines in the upper terrace, which, among other things, means the 2005 is almost exclusively Cabernet Sauvignon, with very little Petit Verdot taken just from the south-facing parcels that ripened properly. Production was down a whopping 80% to just 1,200 bottles, most of which was sold in Italy and Switzerland. 95/Drinking window: 2013-2023.

The 2006 d’Alceo is huge. Still tannic, powerful and brooding, the 2006 is clearly a wine for the future. The 2006 boasts striking depth, gorgeous inner perfume and dazzling balance. With time in the glass, the 2006 starts to flesh out a bit, but it remains intense and muscular to the core. Sweet floral notes, plums, cloves and mint are layered into the finish. This is another epic d’Alceo from Rampolla that captures the purest essence of one of the great all-time Tuscan vintages. 97/Drinking window: 2018-2031. Dark raspberries, cloves, menthol and crushed rocks wrap around the palate in the 2007 d’Alceo. Rich, voluptuous and sexy, the 2007 is very much a product of a vintage that yielded a crop of resonant, generous wines. The ripe, silky tannins will make the 2007 accessible relatively early, but it also has more than enough depth to age well for years. Today, the flavors are naturally still quite primary and there is still quite a bit of baby fat that has to melt off before the 2007 enters its prime drinking window. Still, there is a lot to like, including the wine’s huge, palate-staining finish. Grace meets power in the 2007. In a word: dazzling! 97/Drinking window: 2017-2023.

Exotic, racy notes abound in the 2008 d’Alceo. Dark red and black fruit, jasmine, smoke and sweet spices are some of the many notes that meld together as the 2008 opens up. Dark and intense to the core, the 2008 boasts tremendous richness and volume, all in a style that is quite sumptuous and is suggestive of a late harvest. The 2008 has begun to open up over the last year or so. Today it is super sexy and hugely appealing. 96+/Drinking window: 2019-2039. The 2009 d'Alceo comes across as much more classic in style and structure than the 2008. According to Luca di Napoli, the trick to 2009 was harvesting on the early side. Freshly cut flowers, sweet red berries, plums, mint and licorice all take shape in the glass. Over the last few months, the 2009 d'Alceo has softened a bit, releasing expressive, floral aromatics, brighter shades of fruit and striking inner perfume, but it remains quite vibrant in the context of a vintage in which so many wines are quite a bit riper in style. The 2009 is a wonderfully deep, resonant d'Alceo that should offer a wide drinking window starting in a few years. It certainly looks like Rampolla nailed the vintage. 96+/Drinking window: 2019-2039.

Dark red and black fruit, graphite, smoke, and tobacco are some of the many notes that emerge from the 2010 d'Alceo. An exotic, vibrant wine, the 2010 is shaping up to be a jewel. This viscerally thrilling, full-bodied d'Alceo is nothing short of magnificent. The vintage wasn't without its challenges, however. Poor weather in flowering resulted in a low crop set. Rain towards the end of the season and during the harvest caused the di Napolis to use only the highest, terraced portions of the vineyard, which combined to reduce production by nearly 50%. 97+/Drinking window: 2020-2040. Tasted from tank just prior to bottling, the 2011 d'Alceo is shaping up to be magnificent. Blackberry jam, white flowers and fragrant spices saturate the palate in a stunning wine endowed with superb pedigree and class. It is so rare to find a wine that combines this level of ripeness and acidity, without feeling heavy at all. The 2011 clocks in a 14.6% in alcohol and a whopping 6.4% acidity, a balance of elements that is exceedingly rare. Once again, picking early was the key. What a gorgeous wine this is! (96-98)/Drinking window: 2019-2031. 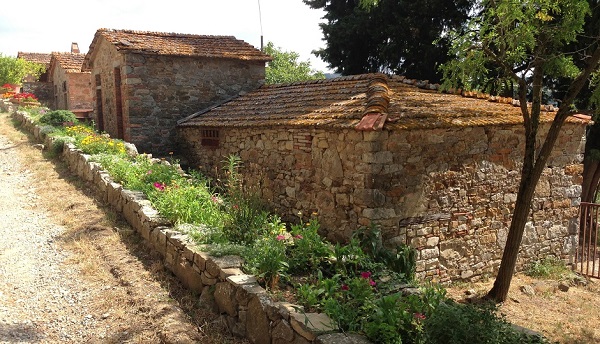 Above and Cover: The beautiful grounds of Castello dei Rampolla