'Tis the Season for Rosato

It’s hard to believe that it’s already May, especially with the chilly winds and rain that have bombarded New York, but the fact is that within a few weeks, those chilly mornings and blustery days will be all but a distant memory, and we’ll all be craving something pink. In fact, this year, this is the case more than any year before, as many of us stare out longingly from our isolation, watching the trees turn greener with each day and the flowers blooming. All we need is a good reason to get outside, without bundling or gearing up for wet weather. What we need is a sunny patch to sit or lounge, the sound of our favorite tunes in the background, the smell of the grill, the jovial commotion of kids playing off in the distance, and the perfect glass of Rosato to top it all off.

But let’s pause for a moment.

So, you think Rosé, or Rosato for the Italophile in you, is just for absent-minded sipping? Well, of course, it can and should fill that niche, but don’t make the mistake of thinking that refreshing, mouthwatering and fun should also equal boring. No, no, no. You see, the best part about Rosé today is that many producers really put their all into creating stunning examples, overbrimming with signatures of terroir and vintage character. Plus, what better place to look for your Rosé fix than Italy, where varieties and styles abound in an endless litany of expression that will keep you on the edge of your lawn chair or leaning against the patio rail. For me, the grill is where I find my favorite Rosé in the glass, but I want that wine to also travel to the dinner table, which it should be able to. Lastly, the best of these wines can even get a little better with age, so don’t fret losing a couple bottles of Cerasuolo or Nebbiolo Rosato in the cellar for next year.

With that out of the way, let’s talk about some of the best regions to explore for the best wines of 2019. 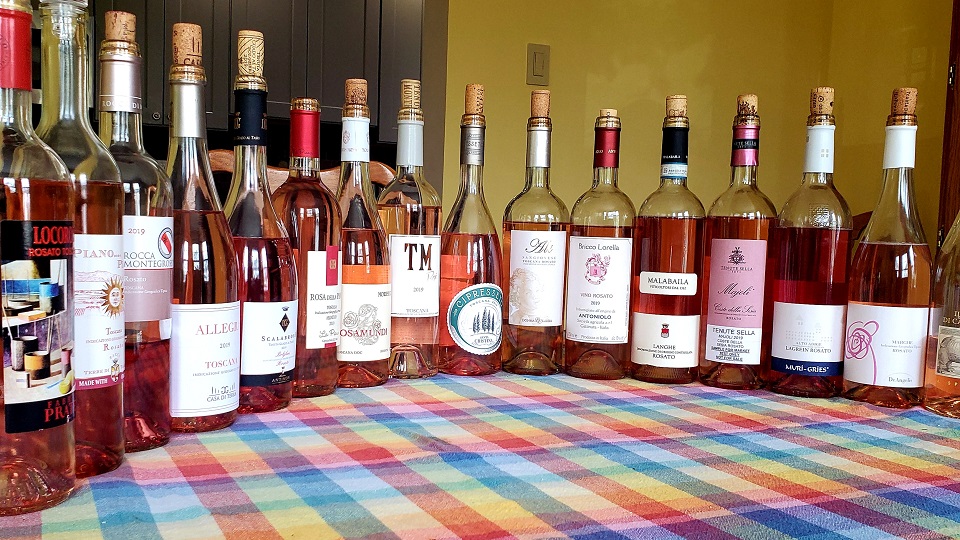 If you think that Montepulciano d’Abruzzo is a fun and jovial mouthful of deep cherry fruit offset by wild herbs and spice, then just wait until you taste a Cerasuolo d’Abruzzo, which adds stunning minerality and a juicy character to the wine. What I love most about Cerasuolo, being a fan of Montepulciano, but not so much a fan of the new oak and extraction you find in some of the wines, is that these are a clean, transparent expression of the grape and terroir. Also, just take a look at those vibrant deep red hues of a Cerasuolo, which is completely natural, as the Montepulciano grape is extremely high in anthocyanins. The fact is that most producers will use little to no maceration to obtain that color. In my opinion, there are few other Rosés produced around the world that can create such an enjoyable experience from start to finish. Cerasuolo pleases the eyes, the nose, the palate, and has just enough structure to allow for short-term cellaring.

As for the vintage, 2019 in Abruzzo started off with a mild and rainy winter, which continued into spring, as precipitation was heavy, and temperatures were significantly lower than average. This helped to ward off disease in the vineyards, yet it also created uneven shoots and disrupted flowering, which lowered yields. However, with summer came warm and dry weather with good fluctuations of temperature between day and night, which was followed by a mild and dry autumn. While the early-ripening varieties, such as Pecorino, were harvested earlier than usual, the later ripening varieties, such as Montepulciano, were able to enjoy an extended time on the vines. According to Cristiana Tiberio, of the Tiberio winery, “The 2019 vintage has minerality and freshness coming from the rain and cool temperatures, but more texture and concentration than previous years because of lower yields."

While Nebbiolo may be my first love from Italy, Sangiovese holds a very special place in my heart. If you’re anything like me, then you will certainly enjoy some of the thrilling Sangiovese-based Rosatos coming out of Tuscany today. What’s more, Tuscany also excels with a number of international varieties that translate really well into Rosé. Syrah, Cabernet, Merlot and Cabernet Franc all made appearances throughout my tastings and kept me enthralled with every tilt of the glass.

Tuscany experienced an extremely cold winter in 2018 through 2019, as well as a good amount of rain from the end of January through April. This was followed by a warm, dry, yet balanced summer, where built-up water supplies from spring rains helped to maintain the health of the vines. Alessandro Bindocci of Il Poggione explained that, “Thanks to the water reserves accumulated in the spring months and the temperatures that never reached high peaks, the grapes ripened in a homogeneous and balanced way, optimal conditions for a great quality…”, which sums the vintage up very well. My tastings of Tuscan Rosatos were some of the most interesting and enjoyable.

When we think Campania, and to be more specific, Aglianico, the last thing we’re thinking about is a Rosé, but I’m here to assure you that if you haven't tasted what’s possible from this category, then you’re missing out in a very big way. Many people don’t realize it, but a fresh Aglianico bears a striking resemblance to Nebbiolo, and that’s what you’ll find here. Bright red fruits, roses, citrus and spice, plus that bracing Aglianico acidity, combines with the ripe fruit of a Rosato and carries it to the stratosphere. If you want depth and thought-provoking summer sippers, then look no further.

As for the 2019 vintage, I’ve already gone on record about how exciting it may be for Campania, especially for the later ripening varieties, such as Aglianico, and from the selection of Rosato I tasted this year, I think we’re in for a real treat. Yields were down after a turbulent winter and spring, which was followed by very warm summer months. However, as temperatures moderated through the fall, it allowed the reds to balance out and enjoy an extended hang time. Antonio Capaldo of Feudi di San Gregorio stated that the “2019 Rosés from Aglianico will not only enjoy great body and structure (typical of the varietal) but a wonderful quite strong color; not the 'Provence-style' pale Rosé but a quite vivid Rosé.”

Barolo, Barbaresco, Gattinara, Spanna and …. Rosato from Piedmont. What do they all have in common? Nebbiolo. For those of us that broke our teeth on young Barolo and Barbaresco before realizing that the best expressions came after a little maturity, it might be hard to bend your brain around a young Nebbiolo wine being vibrant, fresh, fruity and utterly thirst-quenching, but that’s just what these wines are. Imagine all of the feminine characteristics of the prettiest Nebbiolo-based red you’ve ever had, turn down the tannin a notch, but not all the way, and then add a zing of mouthwatering acidity. What you get is a Nebbiolo Rosato, and if you enjoy the variety in other forms (Barolo and Barbaresco), then it will be love at first sight.

Early bud break, late flowering, and a slow ripening process were the three main factors that contributed to the vintage character of the 2019 Rosatos from Piedmont. This vintage was one of the longest and latest in recent times. Giuseppe Vajra, of G.D. Vajra, explained that the resulting wines have “balanced, if substantial, acidity levels, a mineral, restrained tone to all the grapes…” That said, he went on to explain that it reminds him a bit of the fruit from 2013, but only time will tell.

Mount Etna is one of the most popular regions for Italian wine today, as producers continue to plant stakes, seek out new terroir and build brands that can travel to consumers around the world, consumers who seem to have an insatiable appetite for any project with the name Etna attached to it. Who can blame them? Here we find wines that are often compared to a perfect balance between Burgundy and Piedmont, with a diverse set of terroirs that is communicated well from each cru into bottle. Let’s not forget the romanticized fact that they are being made on the side of an active volcano. The main red grape here is Nerello Mascalese, and I must say that, after tasting though a number of Rosatos from Etna, it translates beautifully into a Rosé. The best examples possess depth of aroma and flavor that has earned Etna the comparisons to some of the world’s greatest wines, but with a penetrating acidity and verve that makes them utterly delectable. This is a category that is now firmly on my radar. It should be on yours as well.

Producers have had nothing but good things to say about their 2019 vintage wines. Marco de Grazia of Terre Nere explained that 2019 is going to be an “absolutely beautiful” vintage for the red varieties, “like a blend of 2016 and 2017” and “for the whites, it’s nonpareil.” Marco Nicolosi of Barone di Villagrande stated that the warm summer temperatures of 2019 were balanced by high water reserves from spring rains. His biggest problem came from hail, forcing a strict selection in the vineyards, yet the results were very special. “Perfect, amazing acidity, low pH and excellent quality.”

If your preference leans more toward today's pale-colored Rosé trends, then Bardolino Chiaretto will be your thing. Bardolino Chiaretto is produced in the hills east of Lake Garda, and consists of 35-65% Corvina and 10-40% Rondinella, with up to 20% other varieties, all grown in soils of glacial origins. You’ll recognize these grapes for their use in Valpolicella, Amarone and of course, Bardolino. For me, what separates Bardolino Chiaretto from most other Italian Rosato are their soft, enveloping textures and subtle fruit and spice characteristics. These are remarkably balanced and fun wines that are perfect for losing yourself in their fresh aromatics on a summer afternoon.

This year's vintage of Bardolino Chiaretto was a bit of a climatic rollercoaster, with notably warm and dry weather through the winter, which cooled significantly during the spring months. June brought more heat, accelerating the ripening process, which was yet again balanced by moderate temperatures in early July. The remainder of the summer turned warm again, with short periods of intense heat, humidity and thunderstorms, yet moderated and turned dryer in September and through the harvest, with optimal diurnal fluctuations between day and night. The Corvina grape wasn’t very productive in 2019, and so, according to Daniel Stewart of Guerrieri Rizzardi, the proportions of “Rondinella, Merlot, Sangiovese and Ancellotta were…a bit higher than usual in the blend of rosés…”

With all of that said, this is but the tip of the iceberg. There are so many great regions producing Rosé throughout Italy and many more are included within this report. However, one thing to keep in mind is that many of our favorite wines have not arrived on shelves due to current international conditions, which is why the collection of wines in this report is a bit smaller than usual. I will be adding to this report as I have a chance to taste more 2019s. In the meantime, I hope readers will find plenty of intriguing, thirst-quenching Rosatos in this article.

All wines were tasted in New York during late April and early May.

2015 Brunello di Montalcino: The Vintage We Have Been Waiting For?, Eric Guido, April 2020