Italy has a long and distinguished history of rosato wine production (and many different rosatos at that, thanks to myriad grape varieties and wine styles), but until recently, production volumes had been on the wane. However, over the last few years there has been a noteworthy pickup in rosato output, a reflection that this category of wine has, just as in the rest of the world, made significant gains in popularity and fashion. 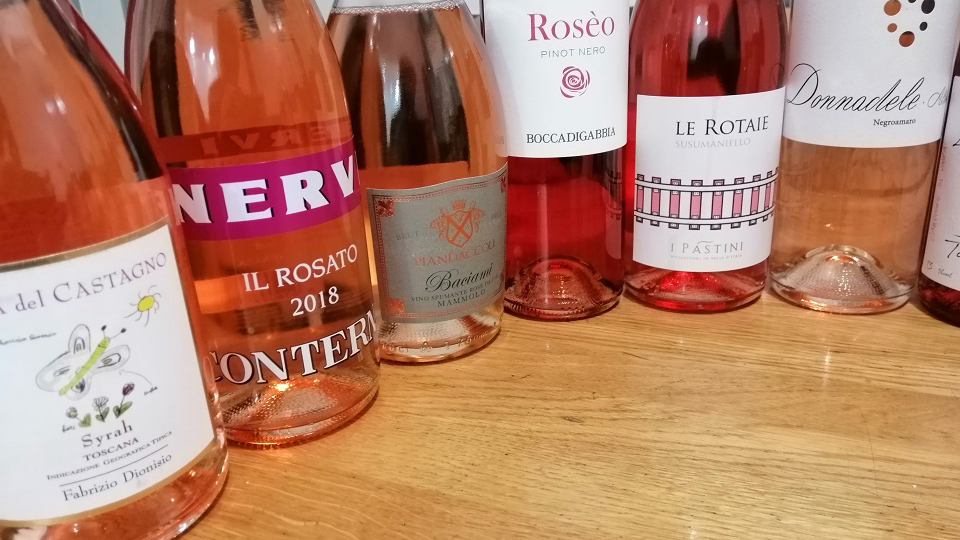 The rainbow that is Italian Rosato

According to the most recent data from France Agrimer, the grape varieties most used to make rosés worldwide are Grenache (28%), Syrah (15%) and Cinsault (13%). Apparently, rosés account for only about 10% of global wine production, so white and red wines still rule the roost. However, consumption is rising, and sales have been steadily increasing in most major markets over the last few years, often by double-digit percentages, which is unheard of for the other wine categories. And this is despite the fact that difficult weather in 2017 led to a worldwide 9% decrease in rosé production (and an 11% reduction in all still wine production) compared with 2016 – as well as a short-term 3% dip in rosé consumption. Even with the 2017 outlier, world rosé consumption has reportedly risen from 21.9 million hectoliters in 2007 to 23.4 million hectoliters in 2017 (Nomisma data, 2018), roughly a 6.8% increase compared to the essentially stable consumption numbers for the still wine category as a whole. That climb becomes an even more impressive 17% increase if one takes the analysis back to 2002 instead of 2007.

Broken down by country, France boasts 28% of the world’s total rosé wine production, and is therefore the runaway leader in this category (the French region of Provence alone accounts for 5.5% of global production), followed by the US (17%), Spain (15%), Italy (10%) and South Africa (6%). The latter country has recorded the largest annual percentage increases of rosé production in recent years (as much as 12% total volume per year). By contrast, the world’s biggest exporter is Spain (42%), followed by Italy (16%) and France (14%). However, France is number one in the export category as well if value, not volume, is the parameter being considered (4.44 euros per bottle on average).

But it’s not just production and export figures that are interesting to analyze; consumption figures are also fascinating. Did you know, or even imagine, that rosés account for an amazing 33% of all the still wine consumed in France? And the rosé slice of the consumption pie is noteworthy in other countries as well: 18% in Belgium (although, Belgium being a small country, it accounts for only 2% of global demand), 11% in Germany (but still 7% of the world total), and, incredibly, almost 50% of all wine consumed in Uruguay. Two countries where the success of rosés appears to be faltering slightly are Germany and the United Kingdom (but a drop in consumption was perhaps unavoidable in the latter country after years of boom-like rosé sales). 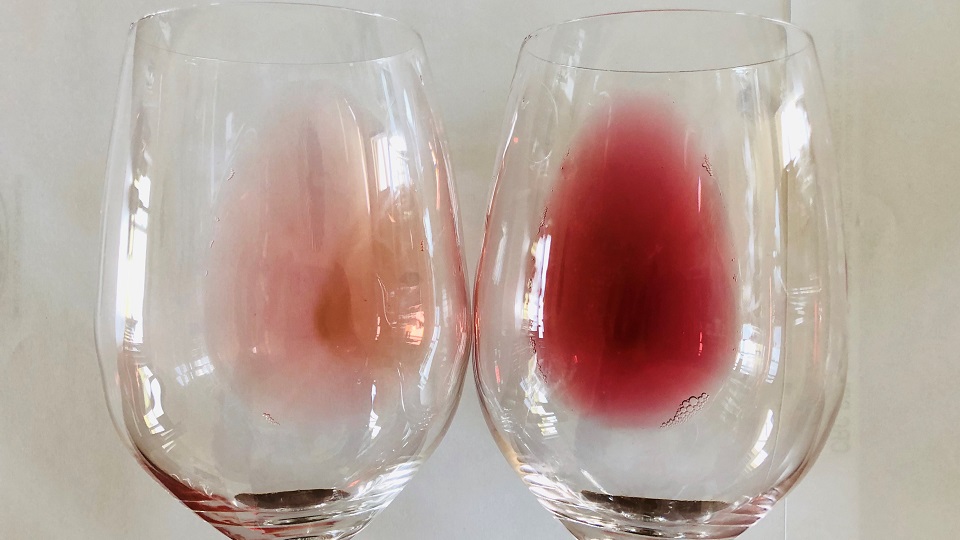 Rosato Facts and Figures from Italy, and My Own Experiences

Italy accounts for 5% of the world’s consumption of rosatos (rosé); furthermore, rosato popularity is on the upswing, with demand increasing the last few years by roughly 2% per year. And data from Italian enoteche (wine shops) shows a 10-20% increase in rosato sales since 2014. Most experts I have talked with over the last two years tell me that they fully expect rosatos to be Italy’s next hot wine thing, and that over the next five years the rosato category’s growth will explode. I now routinely taste a good 33% more rosatos each year compared to five or six years ago, and that number is on the rise. Government statistics would seem to bear this out. In 2018, Bardolino Chiaretto production increased 8.2% from January to May. In Valtènesi, production went from 10,000 hectoliters in 2016 to 12,000 hectoliters in 2017 (a difficult vintage, and yet production still rose there). In Puglia’s Castel del Monte area (Italy’s only DOCG rosato), where the wines are typically made with Bombino Nero and not the region’s more abundant Negroamaro, production has increased from 86,000 bottles (2013) to 169,000 in 2016 (and 122,000 even in the difficult, very hot and droughty, 2017 vintage).

Interestingly, and perhaps somewhat surprisingly, rosé consumption in Italy is not the domain of the younger set, but of the over-55 group. Roughly 73% of women wine lovers buy rosato regularly (67% of men do the same). Rosati (the Italian plural of rosato) are made in every Italian region, with the most rosato bought from Puglia (17%), Sicily (14%), Abruzzo (11%), Sardinia (9%), Alto Adige (9%), Lombardy and Tuscany (both at 8%), and Campania (4%). 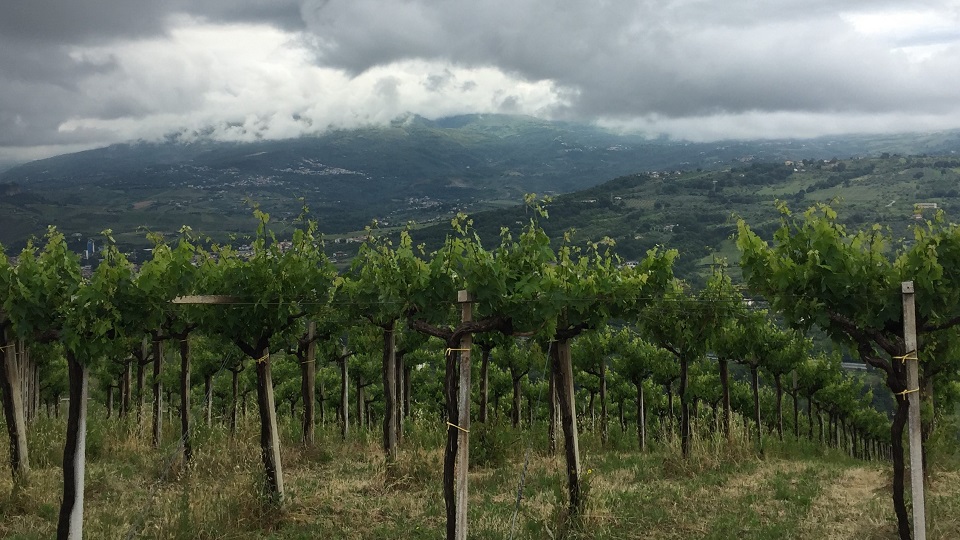 A view of Abruzzo vineyards

However, those figures are fueled by the relative renown of the single production region. For example, as most people know and appreciate Tuscan and Sicilian wines, it follows that consumers flock to buy those region’s rosato wines just as they do the reds. However, the country’s best rosatos are made in Puglia, Abruzzo, Veneto and Lombardy (who share the shores of Lake Garda, where two different rosatos are made: Lombardy’s Valtènesi Chiaretto and Veneto’s Bardolino Chiaretto), and Alto Adige (where both the Lagrein and Schiava varieties are exceptionally suited to making world-class rosato). In fact, relative to this specific category, famous Italian wine regions such as Sicily and Tuscany (save for the latter’s brilliantly good wines made with the Aleatico grape variety) do not exactly shine, with far too many nondescript, overly sweet rosé wines that smell and taste mostly of industrial-yeast-derived aromas and flavors (banana, bubble gum, pear) that offer little in the way of somewhereness or of grape-variety accuracy.

Rather than drink an insipid, so-so wine just because it is from a well-known region or denomination, it is often far better to go looking for the vinous rosato gems of Puglia, Abruzzo, Veneto, Lombardy and other regions. I have done my best to highlight the very best rosatos in the market this year.

I tasted the wines in this report at Italian wineries and in my office in Rome in April and May 2019.