Weingut Köfererhof is one of Italy’s smallest and best white wine producers. Just about any grape variety owner Günther Kerschbaumer touches turns to gold. Over the years, he has fashioned remarkably delicious and ageworthy wines from the likes of Sylvaner, Riesling, Kerner, Müller-Thurgau and other varieties. While Köfererhof’s two most famous wines have always been the Sylvaner R (“R” stands for reserve) and the Kerner, it was the estate’s amazingly pure, vibrant, old-vines Müller-Thurgau wine—a variety from which few producers achieve truly memorable wines—that first alerted me, now many years ago, to Kerschbaumer’s exceptional talent. It is a sign of the times, unfortunately, that Kerschbaumer makes very little Müller-Thurgau nowadays, as the variety is unfashionable and the wine is a hard sell despite its high quality. 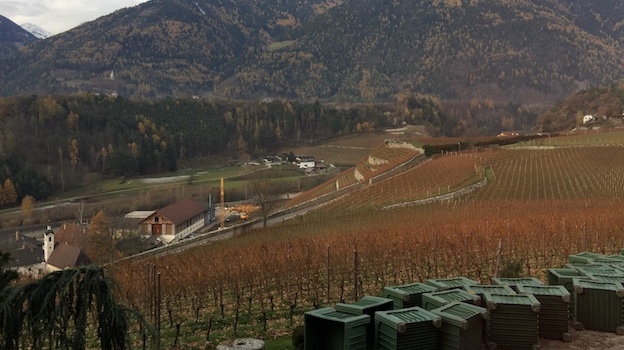 Kerner vineyards behind the Kofererhof winery

Köfererhof is located in Alto Adige’s beautiful Valle Isarco subregion, next to the town of Novacella and not far from Bressanone (or Brixen, in German, as Alto Adige is the German part of Italy). The Valle Isarco is one of Italy’s true hotbeds of high-quality white wine production, and the only place in Italy where you will find world-class wines made from Kerner and Sylvaner (varieties that aren’t grown much in the rest of Alto Adige, never mind Italy). Founded in 1940, the estate is run today by Günther Kerschbaumer, who took over the reins from his father Peter in 2010, after having learned the craft by working alongside him for roughly ten years. The family has only been bottling wine since the 1995 vintage; before that, like many others in the Valle Isarco, they sold grapes to the Abbazia di Novacella, the area’s largest producer, and they previously raised livestock as well. Today, Köfererhof is fully devoted to wine production, though it also boasts a wonderful stube, or alpine restaurant, full of rustic charm that whips up accurately cooked, flavorful and highly typical Alto Adige specialties (incorporating a high-quality restaurant into the winery is another point Köfererhof has in common with other top Valle Isarco wineries, such as Pacherhof and Strasserhof).

You might say that Rodney Dangerfield and Kerner have something in common: as the latter is a grape crossing, it doesn’t get any respect either. And that’s a real shame, for Kerner can give standout results, at least in Italy. In fact, Köfererhof’s isn’t the only noteworthy example of Italian Kerner wine: Manni Nössing, Pacherhof, Abbazia di Novacella, Cantina Produttori Valle Isarco, and Strasserhof are just some of the others in the Valle Isarco that produce knockout Kerner wines. Kerner’s parents are Riesling and Trollinger (Italy’s Schiava); it was bred by August Herold in 1929 and named after Justinius Andreas Christian Kerner, a 19th-century poet and medical doctor (a seemingly rather charming fellow who believed in the therapeutic qualities of wine in warding off ailments). No slouch in the literary department, Kerner was but one in a long line of medical doctors who have made noteworthy contributions over the centuries to the field of the creative arts.

Clearly, Herold’s intent was to create a new grape variety embodying the best qualities of each parent—in this case, Riesling’s nobility and Trollinger’s hardiness. There are numerous reasons why farmers are happy to work with Kerner. In fact, at 7.5% of the total land surface planted to wine grapes, Kerner was Germany’s third most planted wine grape in the mid-1990s (today it covers roughly half that surface). In Alto Adige plantings are still small—roughly 90 hectares, compared to Gewürztraminer’s 570 and Pinot Grigio’s more than 600 hectares—but have been increasing steadily over the past few decades. Kerner is a hardy cultivar that is less demanding than Sylvaner and Riesling and can be planted in slightly less favorable sites. For example, it stands up better than those two do to unexpected bouts of frost; in fact, one of Köfererhof’s best Kerner plots is located in a small depression where the average daily temperature is at least 2 degrees C. lower and humidity is higher than at the top of the hill, where Riesling and Sylvaner are planted instead. In terms of preferred soil types, Kerner is not particularly demanding either, although it does seem to have adapted especially well to the sand, gravel and clay soils of the Valle Isarco. Kerner’s thick-skinned berries and loosely packed bunches are another big plus, because the variety doesn’t succumb to rot as easily as other local wine grapes do. 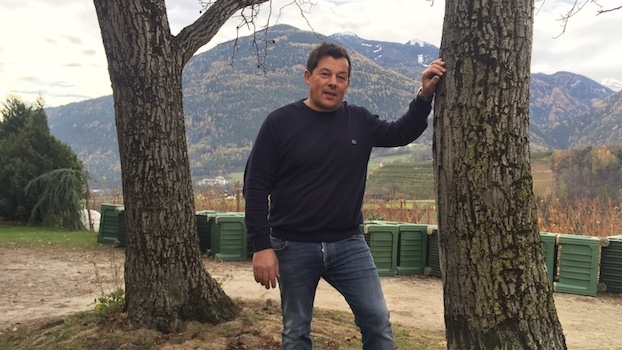 With Kerner, vineyard altitude and yields are the two factors that most affect wine quality. In the Valle Isarco, Kerner is grown at high enough altitudes (on average, about 600 to 700 meters above sea level) to ensure that its wines maintain freshness and vibrancy. As Kerner accumulates sugar very easily, it needs to be planted higher up than many other varieties in order to avoid excessive alcohol levels. A generous producer, Kerner also needs to be cropped relatively low. Generally speaking, most Kerner grown outside of the Valle Isarco is planted at altitudes that are too low for the variety to show its best. But even in Alto Adige Kerner usually flowers and is picked a full two weeks later in the Valle Isarco than it is in the rest of the region due to the higher average altitude of its vines. Valle Isarco also experiences much stronger diurnal temperature variation, which helps to ensure brighter aromas and greater freshness in the wines.

Clearly, not even the best Kerner wines deliver the almost magical purity and the penetrating aromas and flavors that characterize the finest wines made with Riesling. But Kerner does produce delicious, easy-to-understand wines that offer considerable early appeal and often sneaky concentration, and they can be surprisingly ageworthy. Generally speaking, Kerner wines are fuller- bodied but lower in acidity than Rieslings, and they offer lovely, exuberant aromas and flavors of kiwi (especially in the young wines), sage, mint, basil and especially white peach, the latter a sine qua non of a good Kerner wine. When the grapes are especially ripe, passion fruit and pineapple are evident, and I often find a curious hint of bubblegum too. With a little bottle age, Kerner’s familial relationship to Riesling is demonstrated by the development of diesel fuel notes, although these are never as obvious or as intense as they can be in some Riesling wines.

Köfererhof farms 11 hectares of vines overall (5.8 hectares are estate-owned) and grows all the traditional varieties of the Valle Isarco (Sylvaner, Kerner, Müller-Thurgau) as well as less traditional ones that are, however, very fashionable today and much in demand everywhere (Riesling, Grüner Veltliner, Gewürztraminer). The estate produces about 80,000 bottles annually, of which their highly successful Kerner accounts for roughly 30,000. Köfererhof’s Kerner vineyards face full south and are planted at a density of 6,000 to 7,000 vines per hectare; they extend over 3.6 hectares (of which 1.8 are estate-owned) at roughly 650 meters above sea level. Soils are mainly gravel, rich in silt and sand of morainic (i.e., glacial) origin. Kerschbaumer vinifies Kerner in stainless steel, with only a short maceration on the skins for six hours followed by clarification and fermentation at 20 degrees C. The wine remains on its lees for six months in stainless steel and sees no oak prior to being bottled. 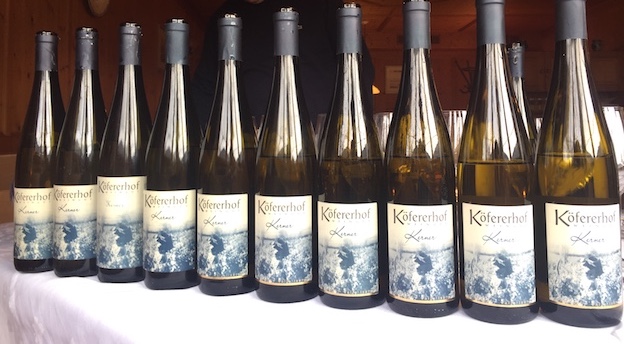 Gunther and his Kerner vertical