The Santa Cruz Mountains remains one of the most intriguing regions in the United States for the inquisitive oenophile. Chardonnay, Pinot Noir, Cabernet Sauvignon and, more recently, Rhône varieties are rarely as vibrant and nuanced as they are here. With a few exceptions, the Santa Cruz Mountains is still very much under the radar, which presents a terrific opportunity to discover wines that offer world-class pedigree at prices that continue to be quite affordable.

The first time visitor to the Santa Cruz Mountains might be surprised. Silicon Valley and famous cities like Cupertino, Palo Alto and Mountainview are all nearby, as is Stanford University. But there is no Beaune, or Alba or city of Napa that anchors the region, from a winegrowing or tourist perspective, that serves as a hub. In most cases, the very few wineries that are located in these rugged hillsides are separated by considerable distance. Moreover, many of the top Santa Cruz Mountains bottlings are made by ambitious winemakers who are based outside the appellation. That creates a very unusual dynamic for a region that produces world-class wines, yet has no real physical home base. Each winery is its own little world. There is something beautiful about that too, though, as I hope readers will discover in this report. For more background on the region, readers might wish to revisit some of my previous articles, all of which are listed below.

I have to tell you, I absolutely adore this vintage. The wines are rich, deep and beautifully layered. There’s so much to the 2018s. The wines are intense and yet they never feel heavy or overdone in any way. It is an exceptionally strong vintage for Chardonnay, Pinot Noir and Cabernet Sauvignon, the three main varieties found here.

“Two thousand eighteen is a drought year bracketed by two wet years in 2017 and 2019,” Jeffrey Patterson told me at Mount Eden, echoing the thoughts of many of his colleagues. “Even so, I find that wines show drought character only after a few years of sustained dryness and heat, as was the case with the 2015s, for example,” he added. 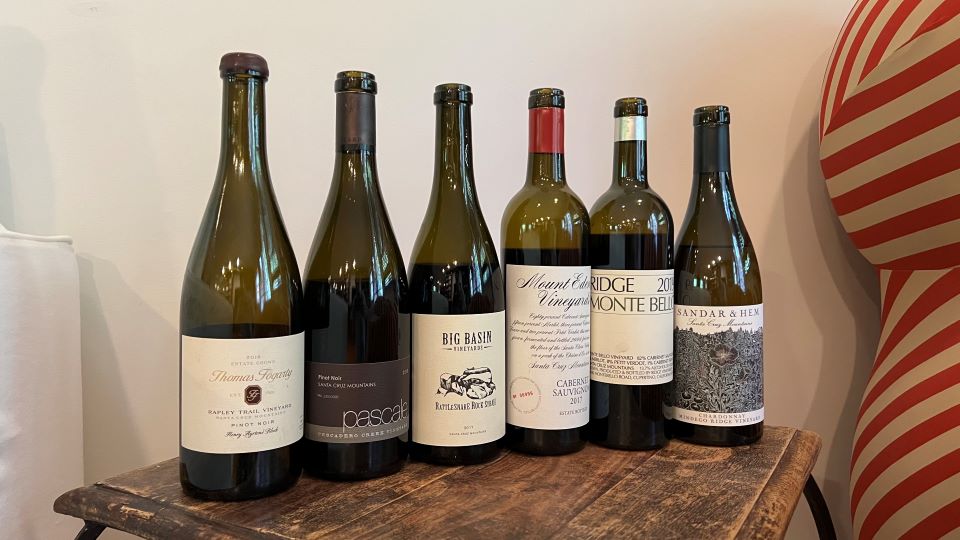 The 2019s present a distinctly different side of the Santa Cruz Mountains. Higher rainfall and generally cooler conditions seem to have benefitted Chardonnay most. With a few exceptions, the Pinot Noirs are generally lighter than the 2018s and less developed in terms of their layers, structure and overall dimension. Many of the 2019 Pinots will drink well pretty much upon release. Only a few of the 2019 Bordeaux-variety wines been released so far. Those I have tasted, the Ridge Cabernet and Monte Bello, are quite marked by late-season heat around Labor Day that pushed ripeness at the end of the year. I won’t be surprised if other wines show similarly.

Readers will recall that the 2020 wildfires were especially damaging in the Santa Cruz Mountains. “Everything was so smoked in, you couldn’t even tell what was good and what was bad,” Tommy Fogarty explained. Fogarty will not release any of his 2020 red wines, but had not decided the fate of the 2020 whites as we went to press. It's a similar story at Rhys, which will release only appellation-level wines from the Santa Cruz Mountains, although there will be single-vineyard bottlings from Anderson Valley and the new Mt. Pajaro property. Even before the fires, though, 2020 was an exceptionally dry and warm year. Aside from obvious smoke taint, intense smoke also blocks light, which is a critical ingredient in the final phase of ripening. The first 2020s I have tasted point to an extremely challenging vintage, but we will see.

The return to an active travel schedule post COVID-19 travel restrictions has been quite challenging, to say the least. Sometimes it feels like we all want to pack everything we missed over two years into a few months. I confess I am guilty of that as well. That’s a long-winded way of saying this report is long overdue. I expect we will catch up in short order given the relatively small number of 2020s that will be released. We will add reviews for wines I missed to this article later in the year and then return to a normal tasting and publishing schedule for the Santa Cruz Mountains in 2023.

See all the Santa Cruz Mountains wines reviewed in 2022

A Conversation with Kevin Harvey and Jeff Brinkman of Rhys, Antonio Galloni, July 2020