Two thousand twelve is a vintage I have always enjoyed, but I also questioned just how well the wines would age. I was working in retail when I started tasting the 2012s. At that time, the first bottles of Brunello would be placed on presale in December of the year before they were released, yet the earliest critical reviews would come out only the following February or later. Tasting deeply and broadly through as many Brunellos as possible was paramount to making decisions, simply because a buyer had to depend solely on their palate to judge which wines were the best. Making buying decisions while tasting the 2012s at trade events, importer portfolio presentations and Benvenuto Brunello was challenging because the wines were so widely appealing.

The 2012s were dark in color, forward and ripe in style, yet they didn’t feel like the result of a warm vintage. Instead, they were precise and lifted with dramatic floral perfumes, full of energy and framed by sweet tannins – in the end, balanced. For example, the 2011s, wines from another warm year, were the complete opposite on release. They were ripe and racy at first yet would tire the palate out with gobs of primary concentration and tannins that never felt quite ripe. When comparing the two years, it was easy to imagine drinking 2012s almost upon release and placing them in the cellar to enjoy a steady maturation, while the 2011s were what we would call “restaurant wines”. 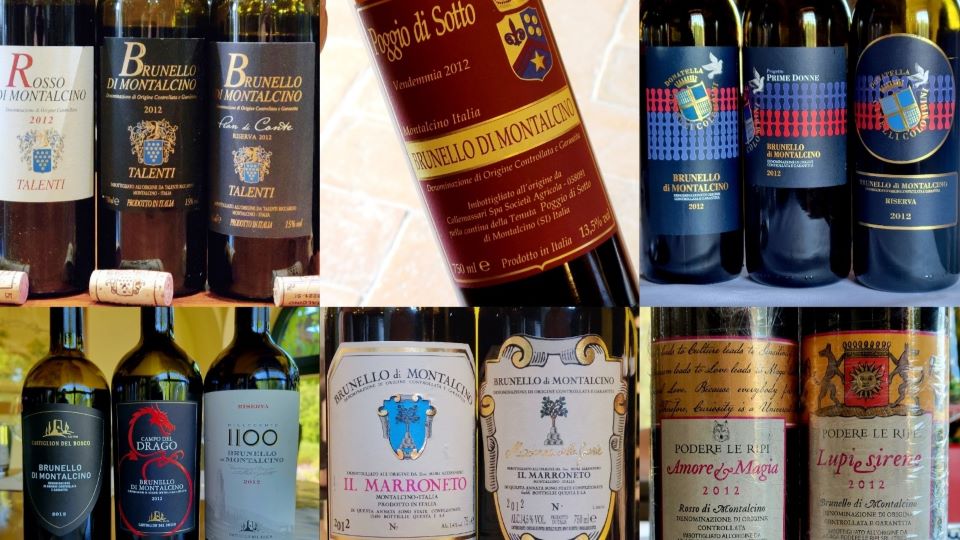 Both vintages were warm and dry, yet 2012 had a steady and balanced heat that allowed the vines to adapt slowly, while 2011 suffered a shocking heat wave that shriveled the fruit. However, the drought conditions of 2012 did leave an impact, creating much smaller, dark berries and a reduced quantity at harvest, between 15-30% lower than usual. Jan Hendrik Erbach of Pian dell’Orino went as far as to explain, “the berries had the size of small blueberries with a very thick skin and just a small drop of juice inside.”

Subsequent conversations with producers revealed that many estates felt that they had learned much dealing with warm and dry vintages over the previous decade or more, starting with 2000 and punctuated by 2011. As a result, many growers changed their canopy management (using the leaves to shade the fruit), reducing grape thinning (green harvesting) and employing grasses between the rows to conserve moisture. Filippo Chia of Castello Romitorio related, “two thousand twelve was the first vintage in which we seriously had to take climate change into consideration," which is now a daily conversation amongst Montalcino producers.

Older vines certainly had the advantage throughout the year’s drought conditions, as did those estates that had already begun adding irrigation. Some properties even began harvesting early to retain acidity. However, in the end, the real saving grace was the precipitation at the end of August and into September, providing just enough time for the fruit on the vine to ease its way through the final maturation period.

Looking back now on 2012, it’s as if it was a precursor of the vintages to come, providing Montalcino with a glimpse of the success that could be possible even through the warmest and driest seasons. Granted, as is often the case in such years, the higher-elevation vineyards of the north had an advantage, but that’s not to say that the deep south didn’t succeed either. When tasting through the 2012s at age ten, I was surprised by how well many wines from the south or lower elevations fared. However, except for only a handful of estates, the wines that are continuing to thrive in bottle hail primarily from the north.

It’s quite confusing to consider that the Consorzio del Brunello di Montalcino ranked 2012 as a five-star vintage, sandwiched between the four-star 2011 (overrated, in my opinion) and four-star 2013 (underrated). Time has shown that these rankings are utterly useless.

I often look at modern-day Brunello on a scale of 10-year or 20-year wines. That’s not to say that a ten-year wine isn’t going to be drinking beautifully up to twenty years, but that at its ten-year mark, the wine is at or approaching its peak. However, a twenty-year wine will begin peaking at twenty and continue to drink well for years to come. The 2012s are ten-year wines. Does that mean you need to pull all your corks and drink them now? Absolutely not! However, it does mean that the 2012s are overdelivering in every possible way and will continue to perform beautifully over the next three to five years – depending on the wine.

What’s also interesting about the 2012 vintage is how successful and relevant the Riserva category proved to be. Where the estate Brunello of many houses is drinking beautifully today, the Riserva continues to maintain balance while maturing at a glacial pace. Of note, the Riservas from Baricci, Fuligni, Biondi Santi, Conti Costanti, Canalicchio di Sopra and Siro Pacenti are seriously worth hunting. With a little work, these wines can still be found in the market.

All of the wines in this article were tasted in Montalcino with producers, at our offices in New York or from my cellar during the summer and fall of 2022.

© 2023, Vinous. No portion of this article may be copied, shared or re-distributed without prior consent from Vinous. Doing so is not only a violation of our copyright, but also threatens the survival of independent wine criticism.