Are the 2010 Brunellos really all they are cracked up to be? After months of seeing and hearing all the hype Vinous readers wanted to see (and taste) for themselves. This recent dinner at Lincoln Ristorante gave attendees an early look at a dozen of the vintage’s best known and most highly regarded wines. 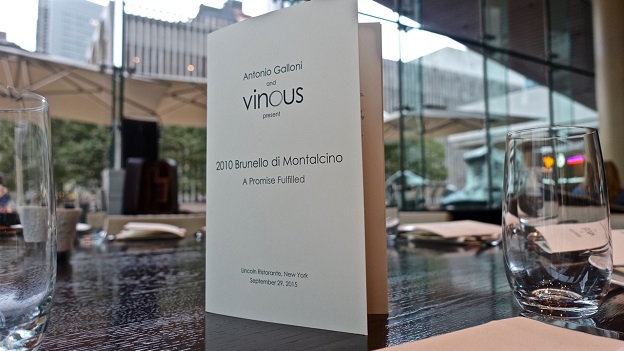 Lincoln Ristorante, with its large glass windows and views onto Lincoln Center, provided a dramatic setting, especially as late afternoon melted into the evening. Executive Chef Jonathan Benno and his team prepared a delicious, Tuscan inspired menu that worked perfectly with the wines. The polenta agnolotti with boar ragu and the Fiorentina steak were among the highlights.

A team of sommeliers headed by Wine Director Aaron Von Rock looked after the wines with extraordinary care. I am a stickler for the details, especially with regards to temperature, but Lincoln’s team didn’t miss a beat. We opened the wines starting around 4:30pm. From the moment I started tasting through the bottles I knew this was going to be a great night, as all the wines were simply ‘on.' The wines were double decanted to give them a little air. Young wines don’t usually throw a lot of sediment, which was the case there, so we decanted mostly for aeration. The Poggione and Biondi Santi were both given a little time in the decanters, as they were quite stubborn at the outset, but the rest of the wines were simply poured back into the original bottles. 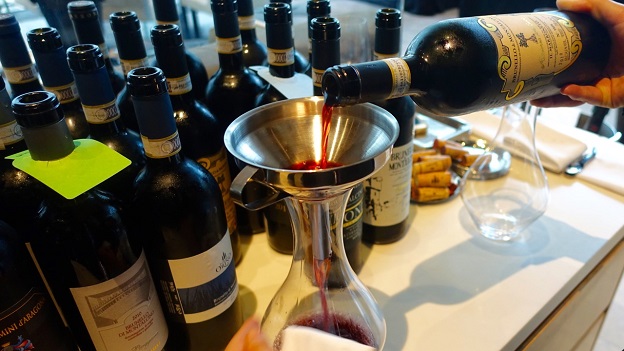 Organizing these wines in some sort of order that made sense was initially challenging. Where do you start? After all, any of these wines could easily be the highlight of most any evening. But in the end the flights came together nicely. Having each wine in its own glass allowed guests to go back and forth between flights with ease.

The evening starts with Jacquesson’s Cuvée No. 738, which is stellar. Bright, focused and finely cut, the 738 impresses for its energy and overall vibrancy. In many ways, the 738 sets the tone for the night, as it is so full of life. This is a great showing from a Champagne that consistently overdelivers relative to its peers. 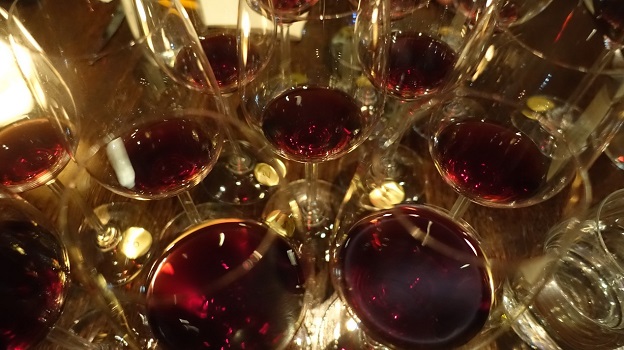 Andrea Costanti’s 2010 Brunello di Montalcino is fabulous. The purity and translucence of Sangiovese comes through beautifully as the wine opens up. Refined, pedigreed and exceptionally beautiful, the Costanti pretty much embodies what 2010 Brunello di Montalcino is all about. Reference-point Brunello. It’s as simple as that. Giancarlo Pacenti’s 2010 Brunello di Montalcino Vecchie Vigne is another superb wine. The contours are more modern and the fruit leans towards the darker end of spectrum, yet all the elements are wonderfully in balance. Surprisingly open and expressive for a young Brunello, the 2010 is sure to improve with a little more time in the bottle. All of the Pacenti signatures are in place, though, and the house style is unmistakable. Stella di Campalto’s 2010 Brunello di Montalcino Riserva is one of the many wines of the night. The aromatics alone are striking, but it is the wine’s total balance and harmony that are so incredibly inviting. It’s almost a shame to serve this wine so early in the tasting, but even later, after all the other big guns have been served, Campalto's 2010 is still stunning. Campalto’s decision to give her Brunello a year more in bottle prior to release has turned out to be wise choice, as the 2010 Riserva is far more harmonious than it has ever been in the past. This is a rock-star Brunello. 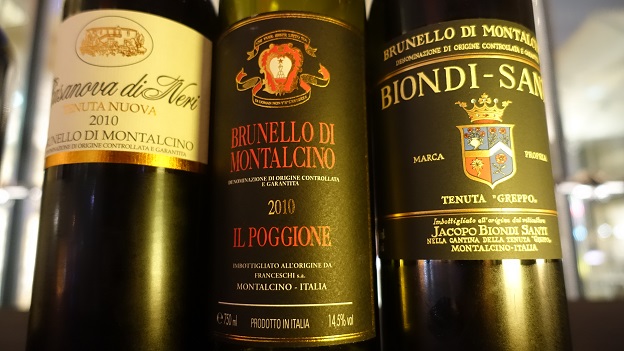 The 2010 Brunello di Montalcino Tenuta Nuova from Casanova di Neri opens with a gorgeous blast of dark fruit, mocha, spice and new leather. The first impression is quite positive, but then the wine loses its persistence on the mid-palate and finish. It’s as if the wine is hollow; there just isn’t a whole lot of depth. The tannins also show a distinct element of astringency and torrefaction, like coffee beans that have been over-roasted. Time in the glass only brings out these qualities further. To be sure, these shortcomings are in some ways quite subtle, but it is precisely the details that separate the excellent from the truly great. Tasting some of the other wines made in a similar style only highlights the areas where the Tenuta Nuova is lacking. The 2010 isn’t a bad wine, but it could have been something more.

Il Poggione’s 2010 Brunello di Montalcino is the single best value in top-flight Brunello di Montalcino. If there was any doubt about that, this tasting makes it clear that Il Poggione belongs right up there along with the best of them. A towering, massively endowed wine, the Poggione is simply marvelous. Biondi Santi’s 2010 Brunello di Montalcino is one of the more controversial wines of the night. Some tasters admire the wine’s classical austerity and potential, but for others the wine is too tight to deliver real pleasure. There is little question the Biondi Santi needs time, but it is in my view impressive on this night, even if it is not as sexy as many other wines. 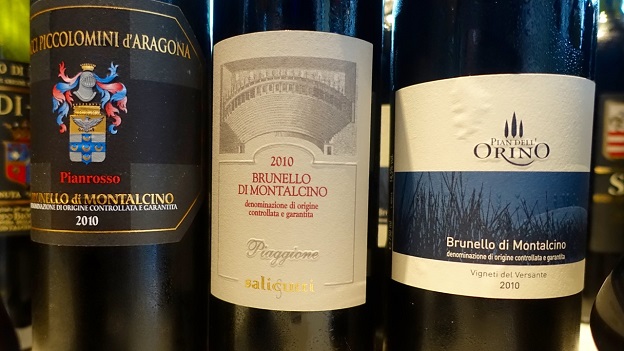 All of the wines in the third flight are stellar. The 2010 Ciacci Brunello di Montalcino Pianrosso is everything a contemporary Brunello from the southern side of town is supposed to be; warm, open, generous and easy to drink on release. A gorgeous, textured wine, the Pianrosso only suffers because of some of the other wines on the table. In any other context, it would surely be one of the very best wines on the table. This is a gorgeous showing. The Pianrosso also forms an instructive contrast to the Casanova di Neri. Both wines are made in a style that emphasizes richness and texture, but the Ciacci has much more depth through the middle and a considerably longer finish.

Salicutti’s 2010 Brunello di Montalcino Piaggione lifts from the glass with the most exquisite aromatics imaginable. The 2010 has really come together over the last six months. I suppose that should not be too much of a surprise, as the 2010 was bottled later than normal, but I am still deeply impressed with how nuanced and complete the Piaggione is today. Proprietor Francesco Leanza has done a fabulous job elevating these wines over the last few years. This is another Brunello that on any other night is the best wine on the table. Tonight it is merely sublime and haunting in its beauty. The 2010 Brunello di Montalcino Vigne del Versante from Pian dell’Orino is one of the most powerful wines of the night. Rich, dense and explosive, the Vigne del Versante Amiata is a wine for the patient. Although most 2010 Brunellos have not begun to shut down, this is one wine that is a bit less expressive than it was the last time I tasted it. Still, the potential here is both significant and evident. 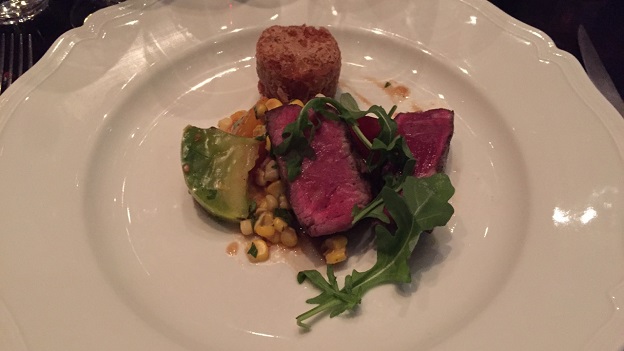 The tension in the room is palpable as the last flight is poured. There are only a handful of wines that can create this almost rabid level of anticipation. Top-flight Brunello is one of them. 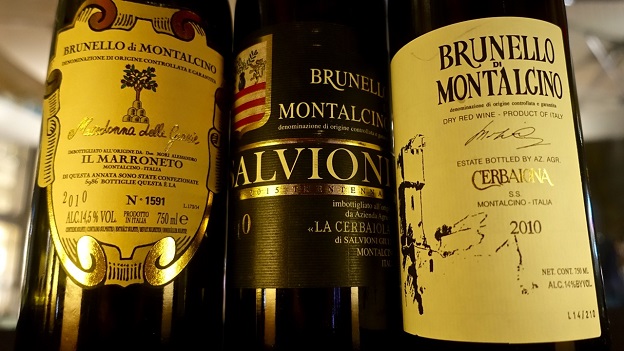 Il Marroneto’s 2010 Brunello di Montalcino Madonne delle Grazie is deep, dark and savory. An exotic melange of herbs, dried flowers and minerals wrap around the intense, powerful fruit. There is a lot going on in the glass as the wine continues to open up. If there is one word that comes to mind, it is this: wild. What a wine! Salvioni’s 2010 Brunello di Montalcino is pure textural richness and sophistication. Rich and powerful yet also incredibly inviting, Salvioni’s Brunello makes a strong case for itself as one of the wines of the vintage. And it should. The purity and luxuriousness of the fruit is spellbinding. On this night, the 2010 is an exotically beautiful, compelling Brunello of the highest level. In a word: superb.

The 2010 Cerbaiona Brunello di Montalcino brings the evening to a rapturous finish. The most anticipated wine of the night, the Cerbaiona shows why it belongs in the pantheon of the most epic wines ever made in Montalcino. A Brunello with no beginning and no end, the 2010 Cerbaiona just is. Every aroma, every shade of nuance, every texture is just…perfect. The 2010 has been nothing less than thrilling every time I have tasted it, going back to the days when it was a young wine in cask. It is every bit as magnificent on this night. 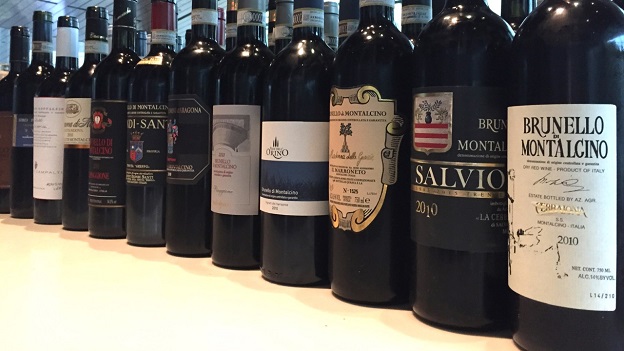 A few last drops are finished off, and the bottles are gathered for the inevitable photos, which provides a great opportunity to survey this stunning collection of Brunellos. The strength of the 2010 vintage in Montalcino rests on the high average level of the wines. Tasting through a dozen of the best and most highly regarded 2010 Brunellos in a gorgeous setting with fabulous food and company makes for a truly unforgettable night.

View all the wines in the order tasted 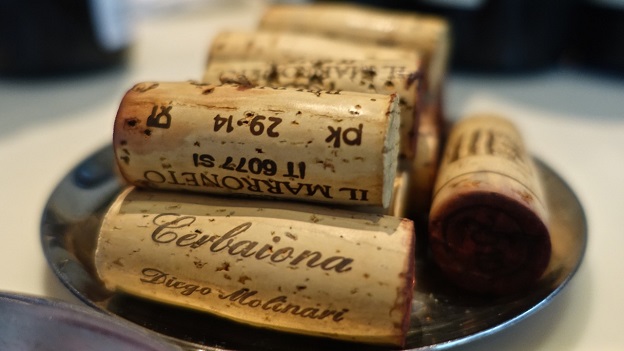