In this excerpt from his book Chianti Classico: The Complete Atlas of the UGA Vineyards, Alessandro Masnaghetti examines the new UGAs (Unità Geografiche Aggiuntive), Chianti Classico’s version of place names, with historical background, in-depth information on soils and detailed maps for each UGA, plus a deep dive into the Lamole UGA. 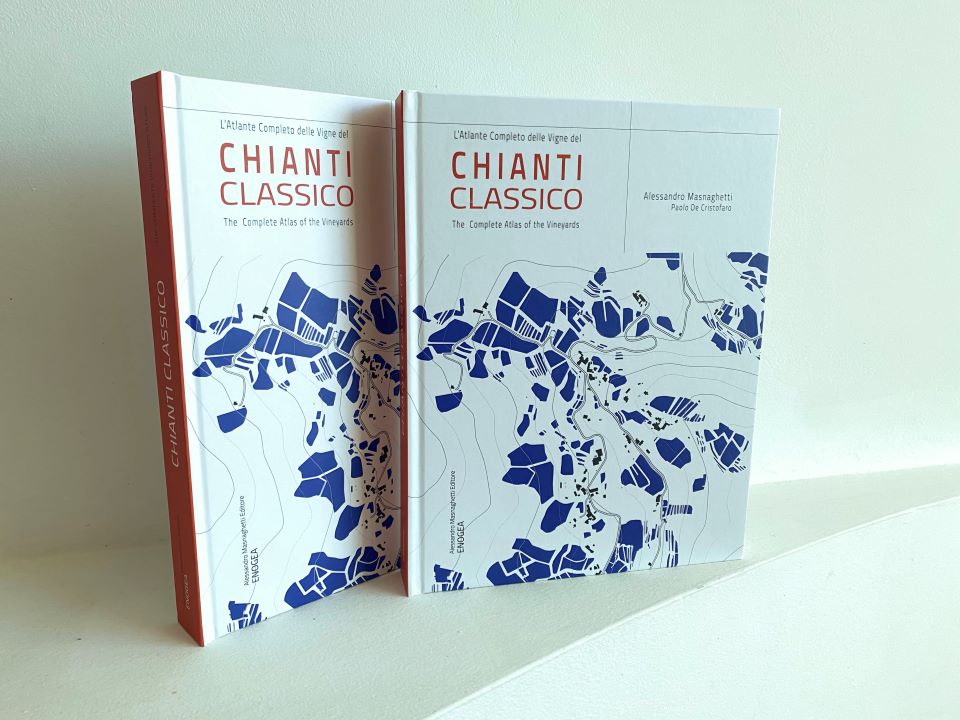 When more than a decade ago I published the first map of the Lamole vineyards, this small Chianti hamlet, whose name is historically linked to the production of quality wine, was just emerging from a long period of oblivion. The reason might have been that there were few producers, or because the hamlets of Lamole and Casole had always been rather closed, or because the market and the critics until recently did not appreciate wines as elegant and fragrant as those from the area.

Since then, fortunately, the winds have changed year after year, so that today Lamole is one of the most esteemed areas of Chianti Classico. New plantings, new small wineries and new investments by producers from neighboring areas, however, have not undermined its traditions, spirit and landscape, so much so that for some years now Lamole has been included in the prestigious National Registry of Rural Landscapes.

That was an important step that preceded a perhaps even more significant recognition, at least for wine enthusiasts, with the introduction of the UGA of the name, which was anything but expected given its small size. Just under 1,000 total hectares, of which only 90 hectares of vineyards, make it by far the smallest UGA, with potential production of Chianti Classico that accounts for only 1 percent of the total.

Equally limited is the presence of olive trees, as typical as was once the cultivation of iris for perfumes, linked both to the type of soil—loose and therefore not subject to water stagnation—and to the traditional terracing that is still the hallmark of the Lamole landscape. Last but not least is the forest, which over 700 meters above sea level (the maximum limit for Chianti Classico vineyards) becomes the sole and undisputed protagonist. 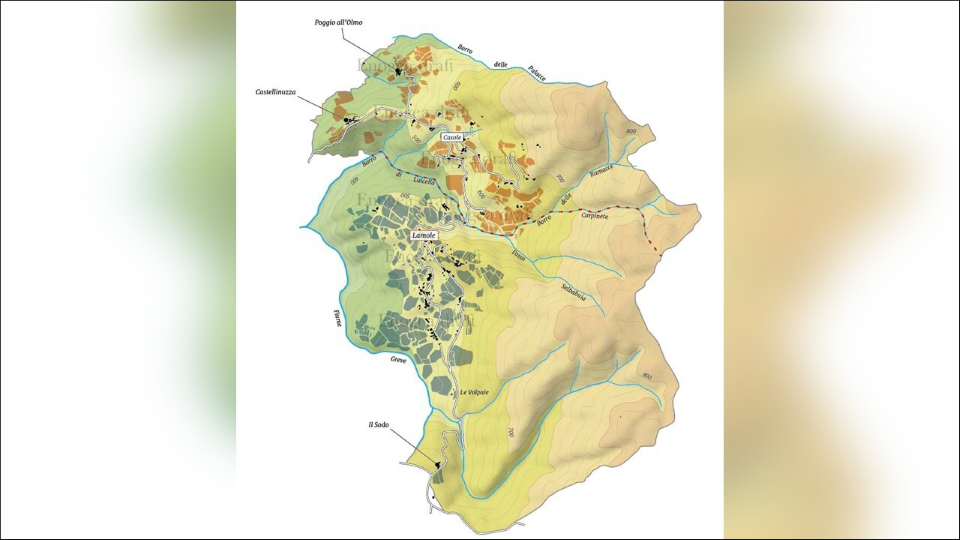 The map above shows the Casole and Lamole districts that comprise the Lamole UGA.

Regarding the boundaries of the UGA, before moving on to a brief description of the area, some clarifications seem in order, particularly for those familiar with the 2011 map I mentioned at the beginning. In that study I described the Lamole area as consisting of three historically distinct units. Lamole proper, which runs from Le Volpaie to the Fosso Selvabuia (actually it would start from Il Sodo, at the junction with the dirt road leading to Le Volpaie, but between there and Le Volpaie there are only woods); Casole, which runs from the Fosso Selvabuia to Pile di an area which in the past enjoyed viticultural and enological distinction; and finally, Castellinuzza, which formally would be part of the hamlet of Petriolo (where Vignamaggio lies, to clarify) but whose ridge represents a natural boundary for the area (its westward slope definitively closes the Casole basin).

The boundary reported in the National Registry of Rural Landscapes is wider, extending to the north to include the first the vineyards of Poggio all’Olmo and then to the area of Le Corti (see Ruffoli fact sheet on page XY), while to the south, beyond Il Sodo, it makes a small detour along a narrow strip of land that reaches into the commune of Radda in Chianti.

The current official boundary of the Lamole UGA, as shown on the maps published on these pages, is more restrictive, however. Le Corti and the extension into the territory of Radda in Chianti are excluded, while Poggio all’Olmo, although isolated from the traditional area, is confirmed as an integral part of the territory of Lamole. 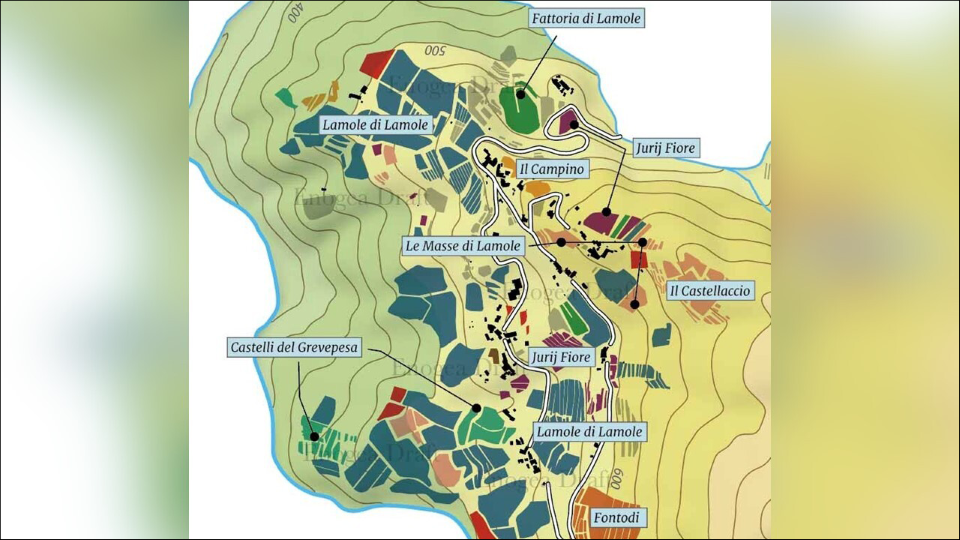 This map offers a further breakdown of the Lamole UGA in depicting vineyard ownership within Lamole section of the UGA.

With this broad view in mind, let’s take a look at the territory of Lamole and its variations in altitudes, exposures and contours. The whole area, which lies at the foot of Monte San Michele, can be divided into two macro-areas: Lamole and Casole.

The area of Lamole can be further divided into four sectors: the first, which runs from Le Volpaie to the cellars of Pile and Lamole, is characterized by good western exposure and a difference in altitudes that is well over 200 meters in total; the second, that of Le Masse, has similar exposure, but higher elevations that reach close to 700 meters; the third, which has Campolungo as its toponym of reference, is the warmest and most open, although it too faces mainly west, and has always enjoyed an excellent reputation; the fourth sector is that of Castello di Lamole, where the exposure turns decisively to the north without much limiting the presence of vineyards.

As for Casole, this macro-area as a whole enjoys a more open position and can be summed up as a broad basin stretching from the Fosso Selvabuia up to and including Castellinuzza. Five other areas can be identified within it. The first, which coincides with the area of Filetta, enjoys a cooler position but of good value viticulturally (as most recent vinifications of Fontodi confirm). The second is included between La Sala, Casole Alta and Grilli and occupies the highest position with altitudes exceeding 700 meters. The third, which centered between I Fabbri and La Doccia, enjoys an excellent balance between altitude and exposure, particularly in the scenic amphitheater located just below the road. The fourth, more secluded, is the sector of Piuca, as well exposed as the previous but with a median altitude between I Fabbri and La Doccia. The fifth sector covers the steep and sunny southern slope of Castellinuzza, which of all, however, has the fewest vineyards due no doubt to the steep slopes.

Looking back, you have surely noticed a factor that Lamole and Casole have in common: high altitudes, which on average fluctuate between 500 and 625 meters above sea level, with maximum and minimum points of around 715 and 425 meters. These heights make the Lamole UGA one of areas of latest ripening of Chianti Classico, becoming even more significant when combined with such a demanding grape variety as Sangiovese, although today—with ongoing climate change—this is much less a critical factor than in the past.

If you are already familiar with the Menzioni Geografiche Aggiuntive (MGAs) of Barolo and Barbaresco, you should know that formally the Unità Geografiche Aggiuntive of Chianti Classico, which we will abbreviate from here on as UGAs, are the equivalent. They simply have different names. If, on the other hand, the term and concept are entirely new to you, here are some basics before going into more detail in the main part of the book.

First of all, UGA applies to a more specific and officially delimited area of production within an appellation of origin, which from a legislative point of view is different from “subzone,” and that’s why it is not correct to use the two terms as alternatives. The differences would be too complicated to explain and also useless for our purposes. What is important is to know that the difference exists and is important.

The reasons for this difference are quickly stated. Chianti Classico and Tuscany in general do not have a tradition of crus or climats as we normally understand them (suffice it to recall that many Chianti estates have extensions far greater than those of the larger MGAs of Barolo) and even if they did, proceeding with the same criteria as Barolo would have easily resulted in a few thousand UGAs, numbers that would be simply unmanageable. But that’s not all. The Chianti Classico zone, more than Barolo, is a large and complex structure, and as such it thrives on many small balances. Any change, especially as important as this, cannot be approached as simply as changing the color of the walls of a house. We might prefer it that way, but that’s not the case. 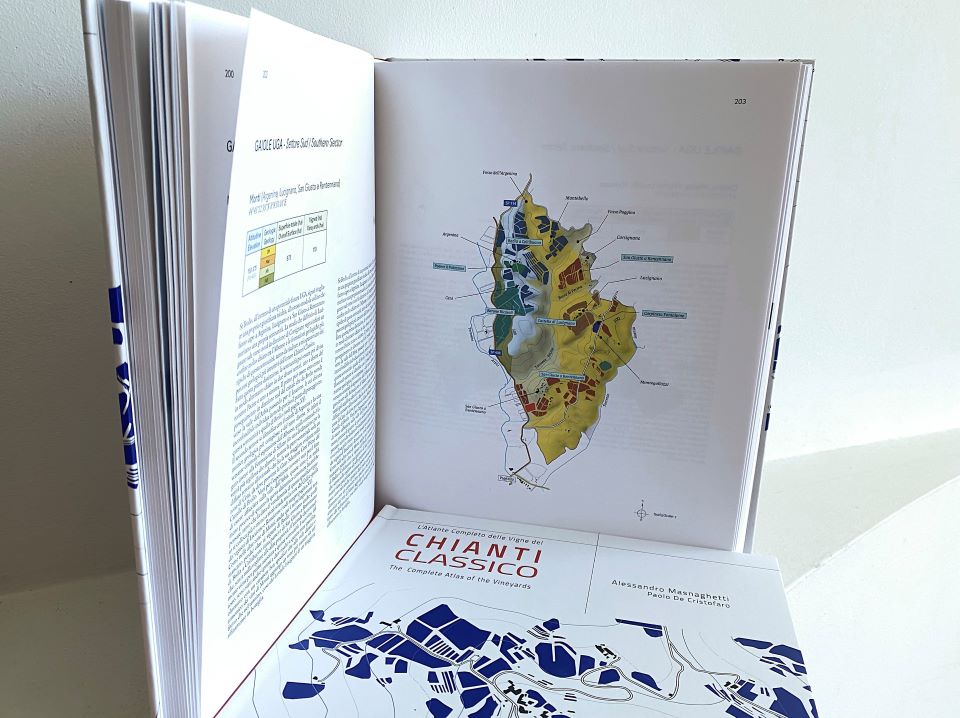 Getting back to basics, those familiar with simplified maps of Chianti Classico may have guessed from the one on the next page how the boundaries of some UGAs coincide with those of communes. Note that certain commune names have dropped the appendage “in Chianti” for the sake of brevity, so it’s simply Greve, Radda, Gaiole and Castellina, while San Casciano in Val di Pesa becomes simply San Casciano, though Castelnuovo Berardenga keeps its name unchanged.

Lamole, Montefioralle, Panzano and Vagliagli are sectors of communes that have been singled out as UGAs, Greve in Chianti for the first three and Castelnuovo Berardenga for Vagliagli. On the other hand, the San Donato in Poggio UGA was created from the merger of the communes of Barberino Tavarnelle and Poggibonsi, or to be precise the parts of those communes that lie within the Chianti Classico zone.

The diversity of the Gaiole UGA as seen in its wide range of soils and geology types.

Among the many peculiarities of Lamole is that it alone among the UGAs of Chianti Classico is affected by only one geological formation: Macigno. No need, therefore, to propose a detailed geo-viticultural map or to discuss geology and wine styles separately, since for once wines and soils seem to be consonant, or almost.

Macigno as a non-calcareous sandstone, gives rise to soils with high percentages of sand and pH levels below 7.5, which in turn result in wines of not very intense color, elegant structure and lower acidity than other formations. That the acidity is more than noticeable on tasting should come as no surprise, since the lesser structure and generally more stylized fruit leave more room for acidic backbone to come forth.

That said, other factors also come into play that influence the elegant character of Lamole wines, starting with the altitude (already discussed at length) and ending with the conspicuous presence of woodland. More difficult to assess, on the other hand, is the effect of exposure since moving from Lamole, and thus from a somewhat more closed position, to Casole and Castellinuzza, on average more open, the style of the wines does not seem to vary significantly.

Chianti Classico: The Complete Atlas of the UGA Vineyards is available through the Rare Wine Co.