2015 Brunello di Montalcino: The Vintage We Have Been Waiting For?

Montalcino is in a constant state of flux. Recent years have brought scandal, a division between traditional and international styles, various efforts to organize and define vineyard sites and repeated battles to change the guidelines of the producers' consortium, all accompanied by a series of fair vintages consumers have often snubbed. You can imagine the happiness 2015 brought winemakers. But is it the vintage consumers have been waiting for?

This isn’t your usual Italian romance, where families that had owned their lands for centuries, if not a millennium, founded a wine, style, and name, which has maintained and gained prominence over all of this time. Montalcino isn’t a region that built its reputation on marketing, branding, or a projection of prestige that was never truly earned. No, this is about a fortified city that housed the last remnants of Siena’s citizens when Florence and Spain took control of their territory - and held their own while under siege. A city, over-brimming in population, that then remained something of an island unto itself for the next three hundred years, before Italy unified in the 19th century.

This is a story about families, who in many cases descended from sharecroppers (mezzadria). Of course, they had their heroes, such as Clemente Santi, who pioneered not only their namesake but also one of their most renowned vineyards. But that was just over 150 years ago, a blink of an eye by Italian wine standards. And yes, there has been a large amount of outside investment in previous decades, yet that doesn’t change the fact that this is a story about hard-working families who take pride in their lands, in their city, and in the grape that they hold high above all else. 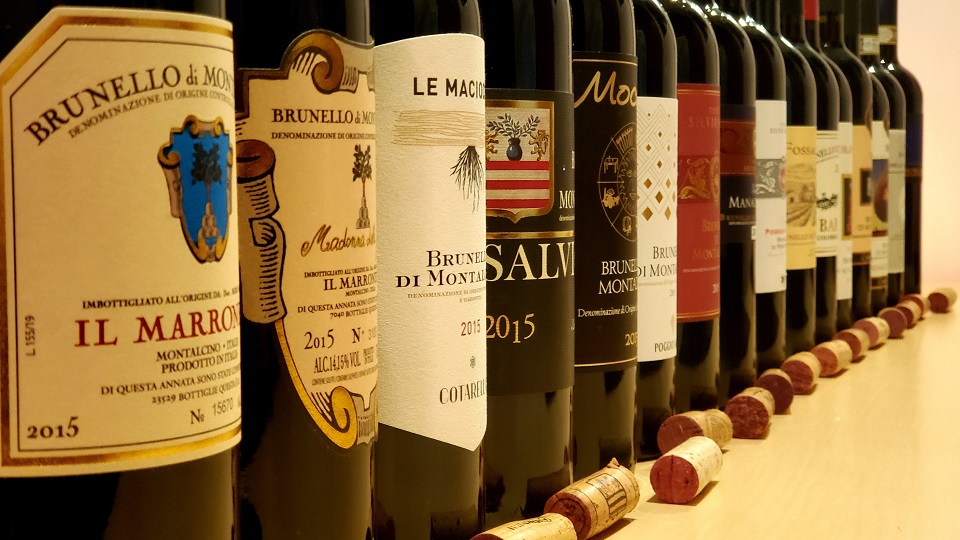 This Story Is About Brunello di Montalcino and the 2015 Vintage

Let’s take a step back because in the grand scheme of things, Brunello di Montalcino hasn’t gotten its fair shake over the last decade or so. Montalcino has been plagued with scandal (who doesn’t remember Brunello-Gate?), which unfortunately hurt the entire region in the eyes of consumers. I can attest to this because, as a longtime fan of Brunello, I remember that it was the main topic of conversation in every wine shop I would visit at the time.

Now let’s consider the transition of taste that Montalcino has witnessed, on the side of consumers and markets, suddenly adopting a stance against Italian wine made in an “International Style.” Granted, we want Sangiovese to taste like Sangiovese. However, a big misconception and oversimplified view of Montalcino is that it is the oak in a Brunello producer’s cellar that creates the dark, large-scaled, and dramatic wines that many producers continue to release. The fact is that it’s more often the location and the farming that is the culprit. Are there wineries that are using French barrique to age their Brunello? Of course there are—yet you may be surprised by how many of your favorite wines from the region are raised in French oak, whether it be Barrique or Tonneaux—yet this is done in a way so not to hurt the typicity of the wine.

What’s more, Montalcino plays host to so many diverse terroirs, and as a result, many attempts to clarify and organize the region have failed. However, you can at least say that the wines from higher altitudes and cooler climates are capable of producing a great wine in a ripe vintage. What you can’t say is that any one area within Montalcino drastically excels more than another, especially in a vintage like 2015.

So let’s talk about the vintages, for which in the case of Sangiovese, a very fickle grape (hence the reason that Chianti and Montepulciano benefit from their ability to blend in other varietals) is very sensitive to vintage. What does this translate into?

When we have a “great” Brunello vintage, everyone goes wild.

When we have a “poor” Brunello vintage, everyone turns up their nose.

When we have a “GOOD” Brunello vintage… everyone seems to just sit on their hands, save for a few restaurants that find them to be the best glass pours.

When you do the math, you find that in the last fifteen years, only four vintages have qualified as great vintages. In my book, they are 2004, 2006, 2007, and 2010. Before I go any further, 2015 does not rank among the great vintages, but if that means that you stop reading now, that will be your loss. 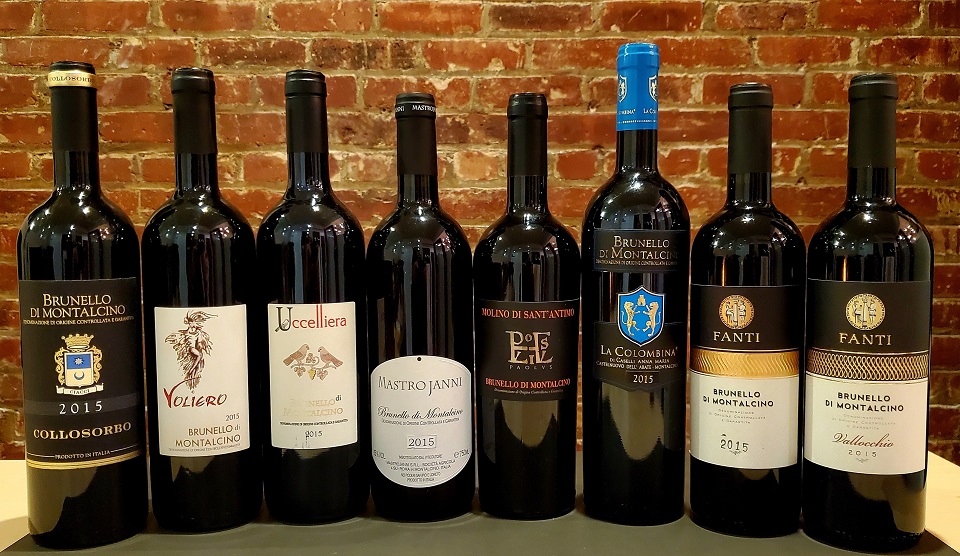 “The Vintage From God?”

By now, everyone has heard about the five-star 2015 Brunello vintage, and many of us have already taken the plunge, propelled by the excitement of wineries, the Brunello Consortium, and the press. What’s not to like?

It’s a vintage of power and purity, the result of a long growing season with no extreme events. One which was warmer than 2014 and with much less rain, yet water reserves were high due to rains throughout the winter months. Those reserves aided the vines through the dry, warm, and sunny summer months, which were complemented by cool nighttime temperatures and just the right amount of precipitation at the right time. What’s more, it was cool and dry prior to harvest, which in turn presented a healthy crop of perfectly ripe grapes.

Andrea Mantengoli, of La Serena, called the 2015 vintage "A vintage made by God." What he meant was that everything seemed to fall into place, and all a producer had to do was sit back and practically watch the vines fend for themselves. Yet, this is where many producers failed, and this is the reason why I find the 2015 Brunello vintage to be a minefield of great wines dispersed amongst a sea of pleasurable, but not especially remarkable, wines.

Mantengoli went on to explain that producers who didn't work the vineyards throughout the season created the sunny-styled wines that some people find to be too ripe or, dare I add, simple. He attributes his own success to north-south exposures, patience, picking for ideal ripeness, and the thirty-year-old vines, whose roots dig deep for nutrients and minerality—in other words, that term we love so much: terroir. Giovanna Neri, of Col di Lamo in Torrenieri, echoed his sentiments, believing that it was her “vine-by-vine” approach that resulted in balanced fruit, as well as canopy management, keeping the grapes shaded through the sunny summer months.

So, is that the whole answer?

While tasting through flights of 2015 Brunello, a few things do become apparent. In my opinion, producers located immediately around the town of Montalcino had the best chance to make excellent wines in 2015. These are the Brunellos of purity and power, aided by elevation and a diverse mix of soils, which added further layers of complexity. Canalicchio di Sopra (including the first release of the single-vineyard La Casaccia), Fuligni and Valdicava are standouts. Le Potazzine and Gianni Brunelli, both of which are blends from vineyards in the north and south, are terrific. I also found excellence in some select spots around Tavernelle, including Pieve Santa Restituta (Gaja), and Castello Romitorio. These wines all make a strong argument for the vintage.

Moving to the south, I found more variability, but plenty of compelling wines, including some of my top performers of the vintage. The success rate may be lower in Castelnuovo dell'Abate and Sant'Angelo in Colle, but the producers who succeeded did so in spades. Lisini, Poggio di Sotto Mastrojanni, Il Poggione, and Uccelliera all turned out masterfully-crafted Brunellos in 2015.

However, it’s not just the top names that excelled in 2015. Remember that this is a farmer’s vintage. I found a lot to like from smaller producers who took advantage of their pockets of Montalcino terroir to turn out some fantastic wines. The fact is, if you’re not looking past the top-scoring Brunellos of the vintage, then you’re missing out on one of 2015’s best qualities: the under-the-radar overperformers. In sum, 2015 is not the “Great Vintage” that we may have wanted or hoped for, yet it’s one that many consumers will truly love.

You’ll notice many of my drinking windows start in 2020, and this is due to the unmistakable sunny character (not to be mistaken with over-ripeness), rounder tannins, and lower acidity found in a number of wines. The best 2015 Brunellos will excel over the medium term in your cellar, but I also found many to be far too simple for any serious evolution.

I for one am not skipping out on 2015; I’m just being extremely selective because the fact is that there is an unprecedented amount of pleasure to be taken from this vintage—you simply need to know where to look. That said, after all of the high praise and build-up, as a whole, 2015 doesn’t measure up as expected. Do we dare look to 2016? That’s a story for another time.

All of the wines in this article were tasted between February and March at the Vinous office in New York and my home office.