I was thrilled to get back to Chianti Classico this past summer. It was my first tasting trip to Italy in two years. Much has changed, for obvious reasons, but some things haven’t, chief among them my long-held belief that these are some of the greatest sites in the world. Readers will find much to choose from in both 2018 and 2019, two very different vintages full of highlights. Although the top wines in this report are utterly breathtaking, Chianti Classico and Chianti also offer the consumer so many exceptional everyday values. This article focuses on new releases from Chianti Classico, but I also include wines from neighboring appellations. 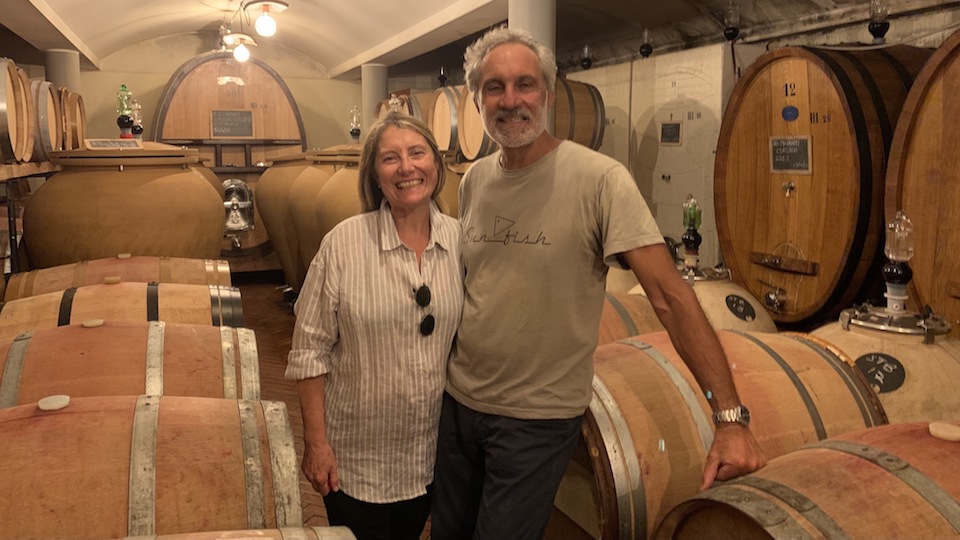 Valeria Viganò and Luca Orsini turned out a spectacular set of wines at Le Cinciole, one of the small, high-quality, artisan estates that dot the Panzano landscape.

The 2018 Vintage and Wines…A Little Bit of Everything

Chianti Classico can be an extremely challenging region when it comes to vintage generalizations. The landscape itself is incredibly varied. Many estates were once hamlets, when little villages were self-starting communities where people lived and worked their entire lives. Compare that to Burgundy’s Côte d’Or or Bordeaux’s Left Bank, where towns are neatly arranged, one next to each other, with all vineyards and wineries pretty much contained within small areas.

In some vintages, conditions are pretty similar across the entire region. Two-thousand seventeen comes to mind. Hail in the spring was an issue for vineyards at lower elevations. The rest of the year was warm and exceedingly dry until rain finally fell at the end of August. All wines reflect these conditions to varying degrees. 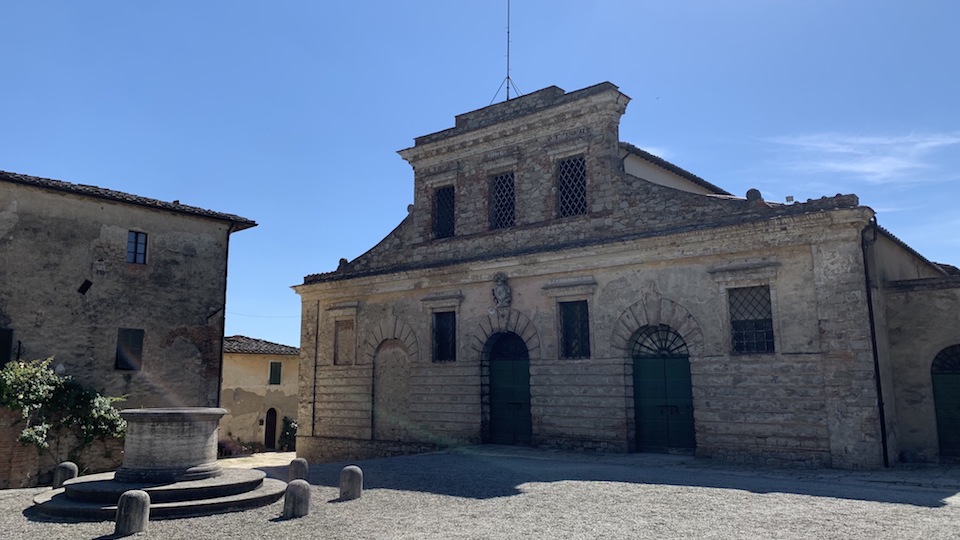 Fèlsina has long been a beacon for Chianti Classicos that speak eloquently to the personality and character of Castelnuovo Berardenga.

Two-thousand eighteen is a totally different beast. The year was characterized by widely varying conditions. It was a generally cool year with uneven ripening. One of the major events was rain in August just before harvest. In Radda, 100mm of rain fell in August. Further south, in Gaiole, that number was closer to 25mm. 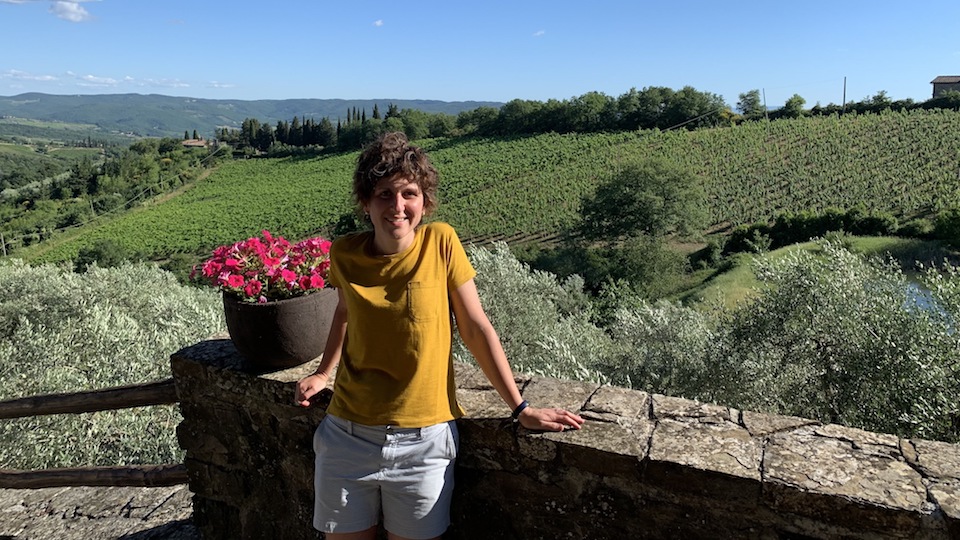 Winemaker Serena Gusmeri and the new ownership team at Vecchie Terre di Montefili have done a tremendous job in revitalizing this once dormant, world-class estate.

Not surprisingly, the wines are quite varied. In areas where temperatures were cooler and rainfall higher, the wines are slender and built more on precision than volume. Montevertine’s Le Pergole Torte and Antinori’s Tignanello are good examples. At the other end of the spectrum are wines like Vecchie Terre di Montefili’s straight Chianti Classico, a huge wine that clocks in at 15% alcohol, but with high acids in the 6.5% range. It is a vintage in which being selective is key. The best wines are absolutely gorgeous, as readers will see in looking over the tasting notes. 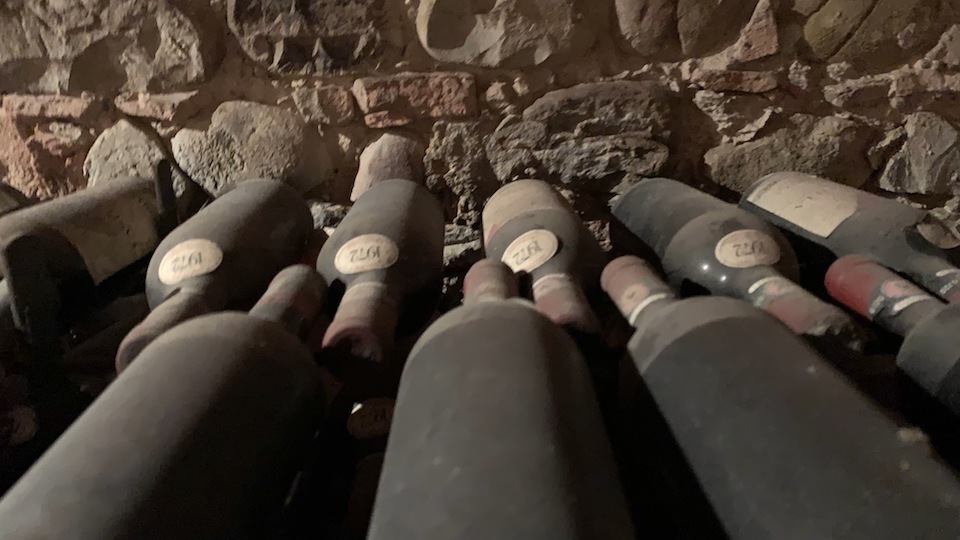 Some of the many older vintages at Castell'in Villa, where proprietor Coralia Pignatelli della Leonessa continues to make old-school Chianti Classicos of distinction and class.

So far, I have tasted mostly the straight Chianti Classicos and Chiantis, as the top selections are scheduled for release starting in 2022. Two-thousand nineteen is generally a year with more even conditions and no shock events. Many growers describe their 2019s as having lower acids and lower extracts than their 2018 counterparts, although the wines don’t always come across that way in tasting. What impresses me most about the 2019s is their exceptional balance. The wines soar with aromatic intensity and show fine tannins with terrific depth, all with medium-bodied structure. Some wines at the entry-level are on the lighter side of things, while others at the upper-level of quality and ambition are mind-blowing. 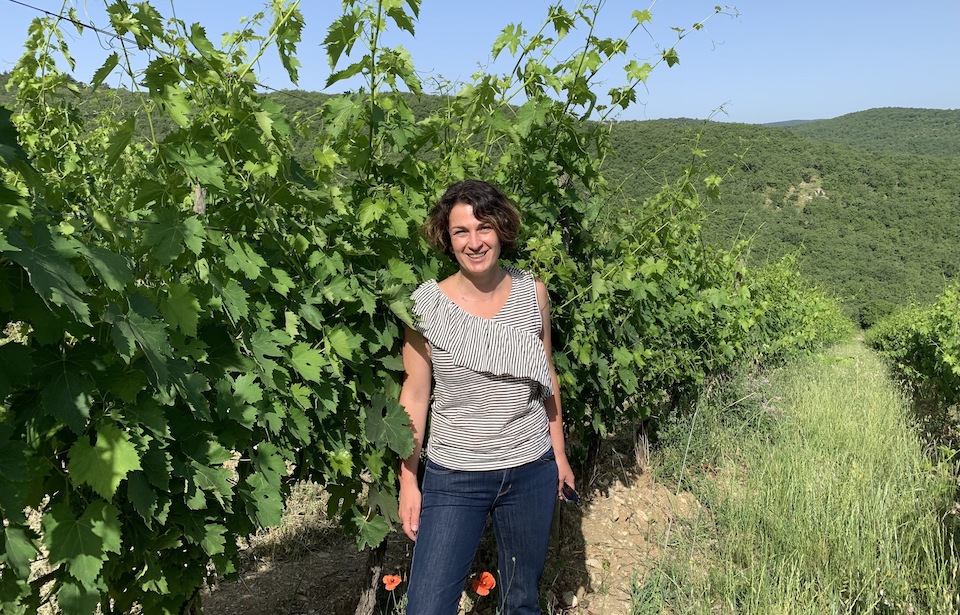 Angela Fronti at her Vigna Istine, Radda in Chianti. Fronti is among the young producers who are giving Chianti Classico an added kick of energy that is much needed.

Following several years of intense discussions, the producers’ Consorzio recently voted on several new initiatives. The first of these is the creation of the new UGA (Unità Geografica Aggiuntiva), the first step in dividing Chianti Classico into specific, defined subzones that producers will now be able to use on their bottles. This new regulation applies only to the Gran Seleziones. That is, to me, a huge missed opportunity. If the goal is to convey signatures of place, the Gran Seleziones aren’t the best wines with which to do that because they are often big, structured Chianti Classicos. Moreover, there are still wines that frankly don’t merit being recognized as Gran Selezione. The entry-level Chianti Classicos, on the other hand, often referred to as ‘Annata’ (vintage) are much more typical of place.

Some examples might be instructive. Isole e Olena’s Gran Selezione is not a wine of San Donato, but a singular expression of a vintage from one of Italy’s most inspired growers. The Chianti Classico, on the other hand, is much more typical of the elegant, mid-weight wines of this sector. Always one of the more outspoken producers in Chianti Classico, Isole e Olena’s Paolo De Marchi is among those who believe the new UGA should apply to all wines, not just the Gran Seleziones. “Compromise is rarely a good thing,” he told me. Felsina’s Gran Seleziones Rancia and Colonia emerge from adjacent hillside parcels. The wines speak eloquently to the micro-differences between those sites, but readers who want to taste the signatures of Castelnuovo Berardenga will find that in the Chianti Classico or Riserva. At Fontodi, the Vigna del Sorbo is an expression of a single vineyard, but it is the Chianti Classico, a blend from multiple parcels across the village, that conveys the essence of Panzano. 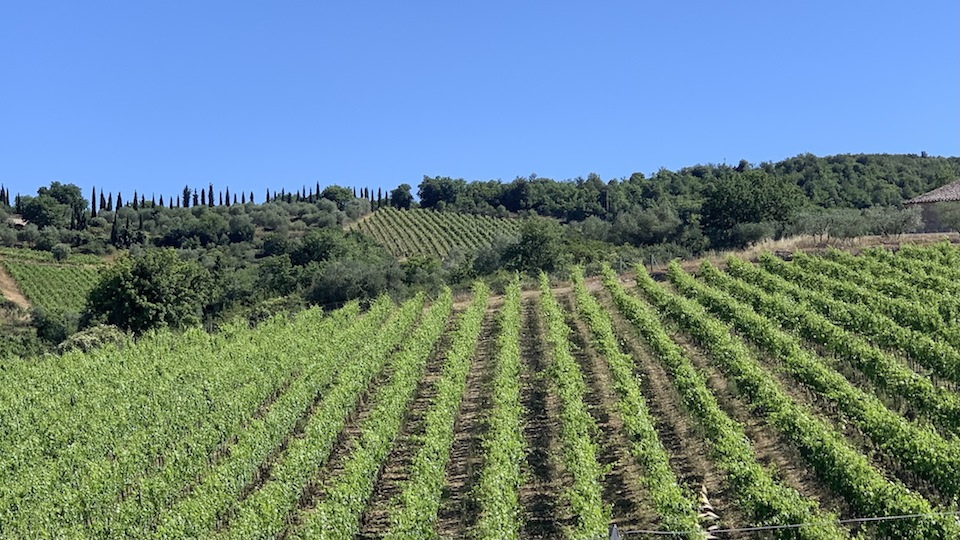 Stunning hillside vineyards at Rocca di Montegrossi, Gaiole in Chianti, where proprietor Marco Ricasoli Firidolfi made some of the most distinguished wines of his career.

The argument for limiting the UGAs to Gran Seleziones is a fear that industrial wineries will flood the market with insipid wines labeled with the new UGAs, and that that will ultimately harm the region. The reality is that there will always be undistinguished wines sold in supermarkets and big box retailers, be they from Champagne, Napa Valley, Barolo or any other prestigious appellation.The new UGAs are; Castellina, Castelnuovo Berardenga, Gaiole, Greve, Radda, San Donato in Poggio and San Casciano, followed by the new Vagliali (previously part of Castelnuovo Berardenga) and Lamole, Montefioralle and Panzano (all previously part of Greve). The eleven zones are immediately recognized as UGAs and can be used for labelling purposes once the UGAs are approved by the Region of Tuscany and Minister of Agriculture (a process that is expected to take approximately 12 months) and that is anticipated to coincide with the release of the 2019 Gran Seleziones. The exceptions are Lamole, Vagliali and Montefioralle, whose use is deferred for three years after approval. In other words, producers in Panzano can use the UGA as soon as the measure is approved while those in Lamole, Vagliali and Montefioralle have to wait. The Consorzio felt that Panzano was an already-established region with solid infrastructure supporting its territory, something the other new entries still need to work on. After three years, wineries in Lamole, Vagliali and Montefioralle have an option to choose if they wish to remain in their previous UGA or belong to their new UGA, and that will be a permanent decision going forward. 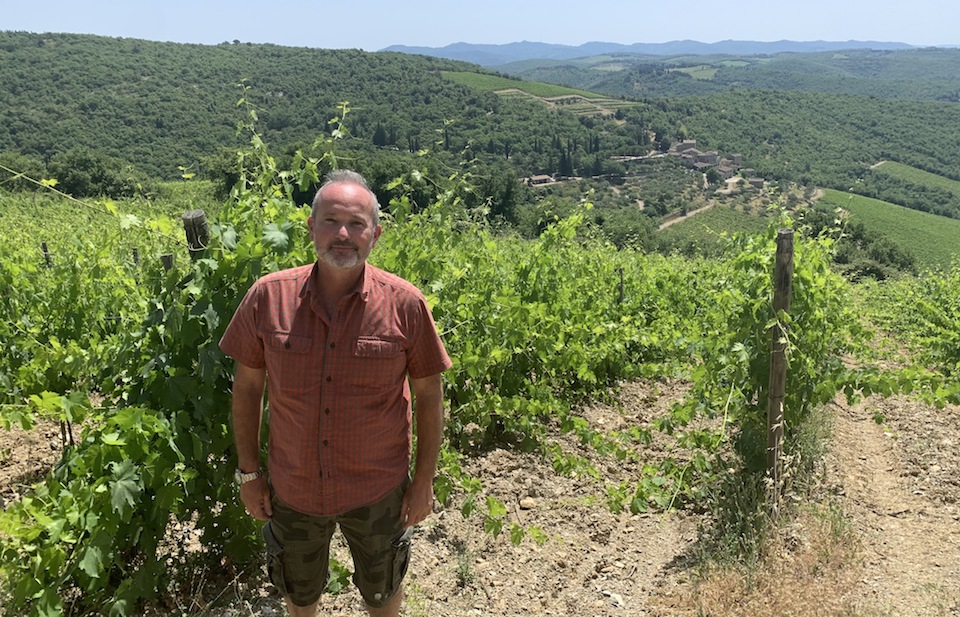 Michele Braganti as seen in his Baron'Ugo Vineyard, at 560 meters in altitude, with the Medieval hamlet of Monteraponi in the background. These wines have never been better.

Gran Selezione – The Next Chapter

Naturally, not all producers agree with this change. Some wanted the Gran Selezione to be 100% Sangiovese, others object to any changes. Lorenza Sebasti at Castello di Ama did not mince words: ”It’s absolutely ridiculous to think we have eliminated high quality international grapes like Merlot and Cabernet Sauvignon that have produced great results in Tuscany in favor of indigenous varieties, some of which, quite frankly are second-class grapes.” Ama’s Gran Selezione Bellavista, 80% Sangiovese and 20% Malvasia Nera, is one of the greatest wines of Chianti Classico, but the blend will need to be tweaked if it is to remain a Gran Selezione. La Casuccia, which includes 20% Merlot, presents an even greater dilemma for Ama. Isole e Olena’s Gran Selezione is another standard bearer for the appellation, but it includes dollops of Syrah, Cabernet Sauvignon and Cabernet Franc in support of Sangiovese. Paolo De Marchi is not one to waste time, though. He is already working on a new Canaiolo parcel to use for the newest incarnation of his Gran Selezione.

My own view is that the issue of permitted varieties in grapes changes over time to accommodate the thinking of specific points in time. I believe that in the not too distant future white grapes will once again be permitted in the production of Chianti Classico as an option for mitigating the effects of climate change. More on that below. This may seem like a radical change, but it’s really not, especially considering today’s whites are farmed with far more diligence than they were fifty years ago, when the movement to eliminate them began. 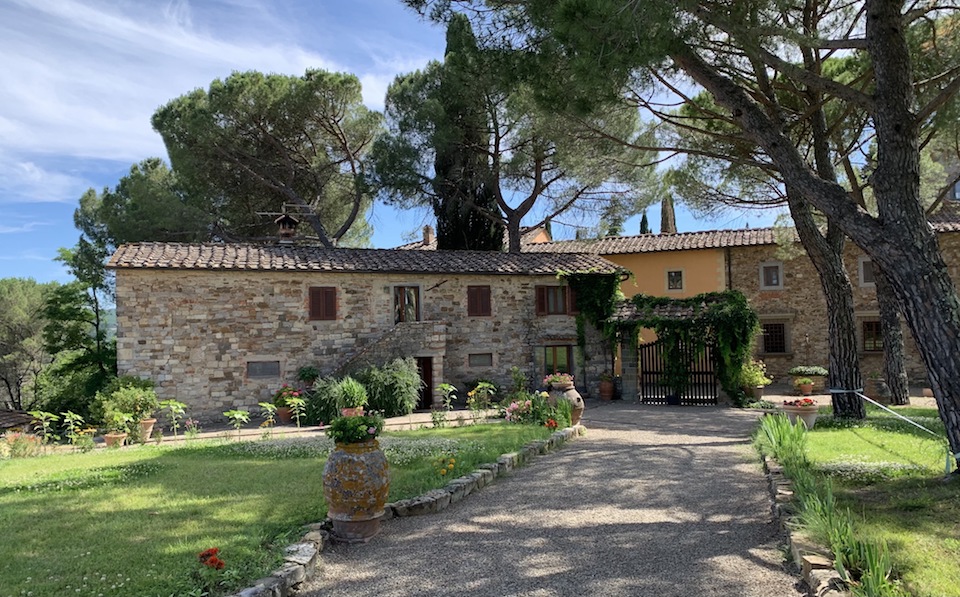 Castello dei Rampolla, one of the historic estates in Panzano's famed Conca d'Oro. The wines this year are magnificent.

There is no question climate change is playing an increasing role in Chianti Classico. “What would you like to drink, water or Coke?” Coralia Pignatelli della Leonessa asked me during a recent visit to her Castell’in Villa estate. “I can’t even think about drinking wine in this heat. You have to remember back in the 1970s we were ecstatic when wines reached 11.5%-12% in alcohol. Today, things are totally different,” she added. “Back in the 1990s we green harvested twice in order to achieve balance in the vines,” Luca Martini di Cigala explained during our tasting at San Giusto a Rentennano. “These days we barely drop crop and we don’t deleaf, yet we have wines that often approach 15% in alcohol. Something has fundamentally changed.” I heard much the same everywhere I visited.

Not surprisingly, these developments have created a surge in interest in vineyards at elevation and with northern exposures, sites where Sangiovese would have never ripened a generation ago. We are clearly in a time of tremendous change, a time when many of the conventional assumptions of what makes sites favorable are being turned upside down. Stay tuned….

I tasted all the wines in this article during a trip to Chianti Classico in June 2021, with follow up tastings in New York during July and August. 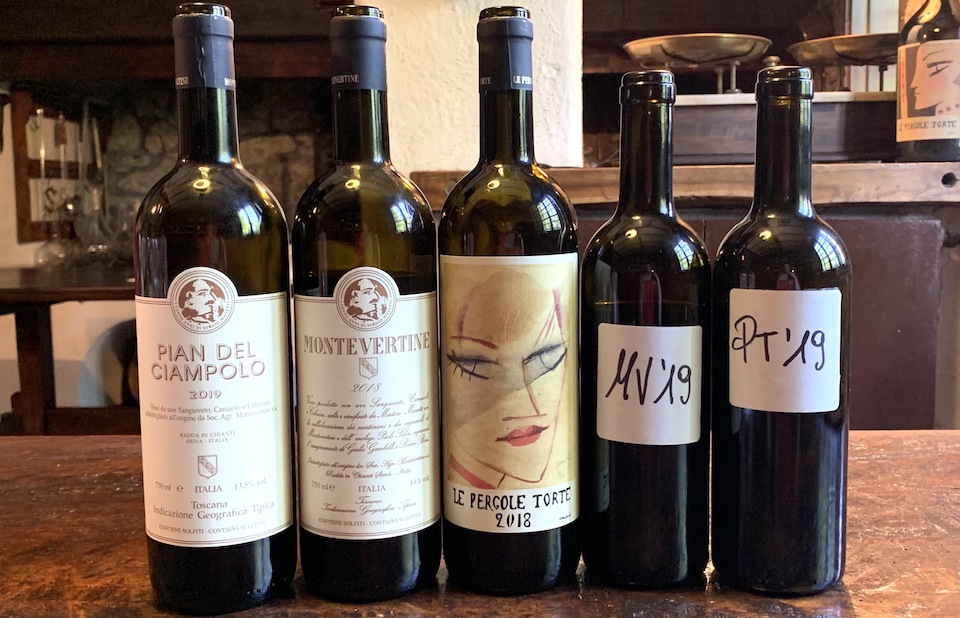 Montevertine remains a reference point for not just Tuscany, but all of Italy. The 2018s and 2019s are sure to delight fans of the estate.