The Other Side of Bordeaux

Let us turn away from those gilded towers of Grand Cru Classés and cult Right Bank wines that have become the preserve of the wealthy, and direct our attention toward what you might term “affordable” and/or “alternative” Bordeaux. There is no disguising the fact that this writer is fortunate to drink and write about Bordeaux at its higher echelons. But like most people, I can ill afford the equivalent of a family holiday for a case of wine at en primeur, and too many price tags defy rationality. I am just as interested in wines at the lower end of the pyramid that frequently offer the high end of the quality-to-price ratio. For that very reason I have reported on the new release of Cru Bourgeois over the last decade. This classification is undergoing a radical change, and so there is no formal tasting this year. It is something that I will miss, though I hope to report on some back vintages if time permits. So this article on “the other side of Bordeaux” is based on two tastings that I attended, organized by UK importer Vine Trail and Bordeaux consultant Olivier Dauga. 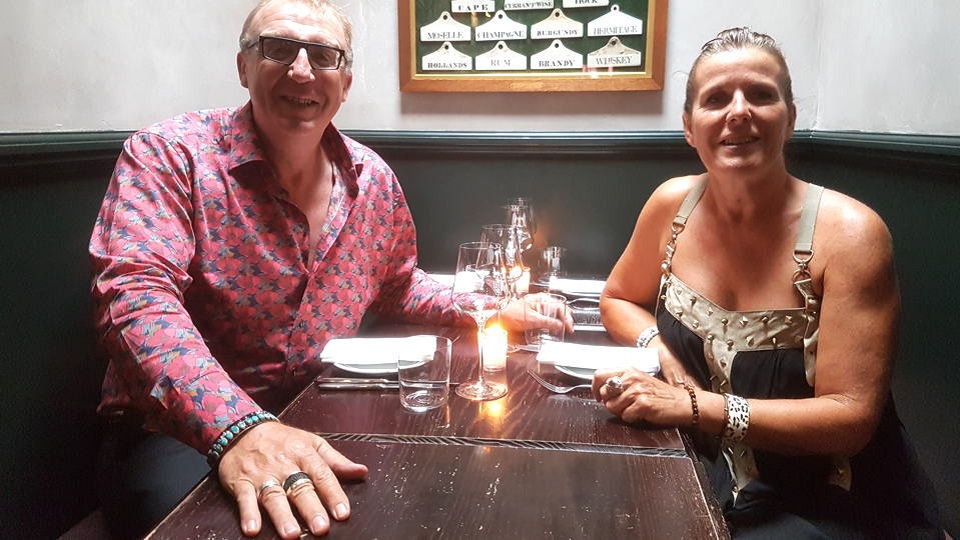 Olivier Dauga and his partner-in-crime Cathy Socasau following our tasting in July 2019.

My annual tasting with larger-than-life consultant Olivier Dauga is one that I always look forward to. His portfolio tends toward less fashionable appellations and less familiar properties. This time around, most of the wines focus upon the 2018 vintage, nearly all bottled after one year rather than the usual two. These are wines that are made ready for market, hence the generally shorter or more immediate drinking windows. They lie at the affordable and occasionally “bargain” end of the spectrum. Dauga told me that he is now using less SO2, and in some cases, none at all. I include several releases from his “Wild Selection” range (now in its second year of organic conversion), matured in 500-liter barrels that include Damy and Vicard in Cognac, with a special selection of fine wood grain to impart finer tannins that render them more approachable. These wines might be inexpensive, but they still receive care and attention.

One observation I made during this tasting is how well many of the pure Malbecs tasted, based on examples from Château Marzin and Relais de la Poste. It’s a small sample selection and yet I couldn’t help feeling that this grape variety was better suited to the season’s hot summer than the thin-skinned Merlots. Once upon a time, Malbec was much more widely planted in Bordeaux, and not looked down upon by the Bordelais, as it tends to be today. With global warming impacting ripeness levels, perhaps we will see a resurgence of Malbec in the same way that Cabernet Franc has become more popular over the last decade. (Global warming is not the only major challenge on the horizon, and I will broach that at the end of this article.)

In March this year I attended a fascinating and very welcome tasting organized by Vine Trail and entitled Bordeaux: The Risk-Takers. It included a dozen or so small artisan producers that furrow their own path. Among their number was Bel Air Marquis d’Aligré, a Margaux property that I profiled in detail last year. I would have rubbed my eyes in disbelief if octogenarian proprietor Jean-Pierre Boyer had been pouring his wines! Still, the three vintages vindicated my praise for his distinctive wines, and a 2001 Bel Air Marquis d’Aligré shared over dinner a couple of weeks earlier won over new converts. At the same time, I know that these wines can vary in quality from bottle to bottle because of the way they are made, though a majority of my personal experience has been sound and rewarding. 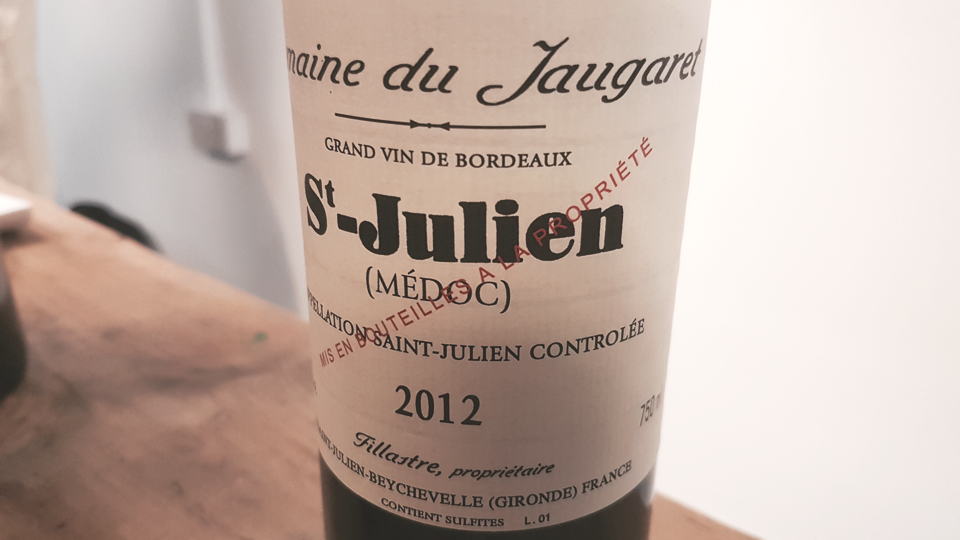 I am pleased to include what could be seen as a “kindred spirit”: Domaine du Jaugeret in Saint-Julien. It is often conflated with the similarly titled Clos du Jaugeyron in Margaux, and to make matters worse, readers will find both in this report. I first heard about this diminutive producer four or five years ago. Proprietor Jean-François Fillastre’s family has tended the land since 1654, their half-dozen plots occupying just 1.3 hectares propitiously located between no less than Ducru-Beaucaillou and Gruaud Larose and planted with 80% Cabernet Sauvignon plus Petit Verdot, Merlot and Malbec. The oldest vines are around 50 years old, but apparently some of the Malbec vines can call themselves centenarians. Fillastre has a vinification philosophy similar to Boyer’s, and the wines are aged in two- to 10-year-old barrels for three years with racking every four months. I have heard that the authorities have taken a dim view of Domaine du Jaugeret’s supposed lack of Saint-Julien typicity (a charge leveled at Olivier Dauga) and relegated some vintages to Vin de Table status. I don’t know which vintages they were, but I found that the 2009 and 2012 Domaine du Jaugeret both had much to offer those with a penchant for Claret stripped of the uglier facets of modernity.

From a family that has farmed Bordeaux for centuries, we move on to a small grower whose vintages you can count on one hand. Osamu Uchida is a Japanese winemaker who fell in love with Bordeaux. He farms a tiny 0.60 hectares of 30-year-old Cabernet Sauvignon, and élevage is conducted in his garage, which is apparently just 125 meters away from Mouton-Rothschild. This is haut couture winemaking, with fruit destemmed by hand, manual pigeage and a semi-carbonic maceration à la Beaujolais in used 500-liter barrels. One or two journalists perhaps got a bit carried away by the novelty of this wine, and at the end of the day it is a little simple. On the other hand, I do not think Uchida intends to create a profound Haut-Médoc for cellaring, and the wine is perfectly enjoyable.

To be honest, not everything at the Vine Trail tasting hit the right notes – not that I expected or even wanted it to. Risk-taking means that some of the wines were just not going to work out in bottle, and I have not shied away from pointing those out in my tasting notes. That is part and parcel of winemaking. I hope the Vine Trail event becomes an annual one, because tastings like this are all too rare these days, and they offer a welcome counterpoint to the famous châteaux that often lie next door. 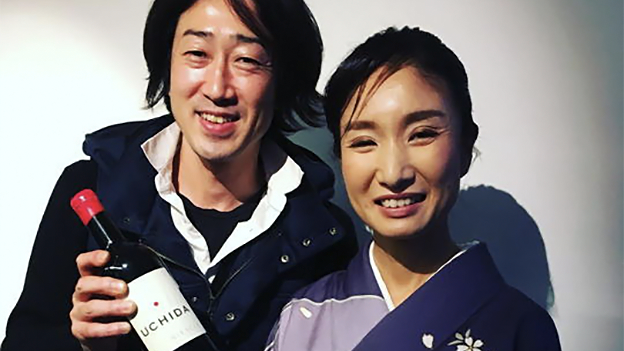 Japan meets Bordeaux with winemaker Osamu Uchida, pictured on the left with his kimono-attired translator. Photo courtesy of Alice Lascelles.

Preceding the tasting, Olivier Dauga opined upon the current state of Bordeaux and lamented its polarization. In a sense, there have always been the haves and have-nots, but never this yawning unbreachable gulf between the two. Over the next 10 years, Dauga believes that around 50% of Bordeaux vineyards will vanish because they are no longer economically viable, a long-term problem for which there is no immediate solution. Ironically, this comes at a time when at the lower end of the price spectrum, Bordeaux is producing better wines than ever. The regrettable but ineluctable truth is that beyond the glitterati of famous names, Bordeaux is unfashionable. Consumers are more attracted to exciting new wine regions with interesting backstories, innovative techniques and clever branding that all combine to leave Château Fuddy-Duddy in the dust. Who wants stuffy claret on the table when you can have the exciting new kid on the block? In fact, Dauga told me that he specifically designed the label of his “Wild Selection” range so that it does not mention Bordeaux because, to use his words, “If you write Bordeaux on the label then it is difficult to sell.” That is a damning indictment of Bordeaux, a region whose name once promoted sales.

As a region, Bordeaux can uphold traditions or be as innovative as anywhere else. I have little doubt that vineyard acreage will decrease over the next few years as the realities of global demand bite harder – and this will provide opportunities. As land prices fall, others can move in, try their luck, and sow seeds of a counterculture that might ignore the constrictions of appellation rules or even “Brand Bordeaux” to instead create delicious and interesting wines that just happen to be made in this region. Foraging around the margins of Bordeaux will be more and more interesting, and may attract a new generation of consumers. At the end of the day, Bordeaux has to change, if it is to survive as anything more than a gilded palace providing investment fodder.

A Century of Bordeaux: The Nines, Neal Martin, September 2019