Three bottles tasted and two separate, independent critical opinions, both in one place. Neal Martin and I offer our views on the 2018 Château d'Yquem.

The just-released 2018 Château d'Yquem is a pretty, gracious wine. In 2018 d'Yquem is decidedly airy and ethereal in feel. Light apricot, passion fruit, spice, tangerine oil, orange peel, jasmine and pear accents are layered throughout. Residual sugar is 145 grams per liter, which is not especially evident. I tasted the 2018 over the course of several days and saw how well it responded to aeration. Yquem has a track record for aging brilliantly, but given its mid-weight structure, I would prefer to enjoy the 2018 young, while the flavors remain fresh. It’s a fine effort in a difficult year.

Pierre Lurton describes 2018 as a challenging harvest marked by hail in July, higher than average temperatures and lower than average rainfall in the summer. Yields are down by 40%. Botrytis arrived only at the very end of the season. Harvest started on October 17th and wrapped up on the 27th, a narrow window of just ten days, much more compact than the norm here. The 2018 is 85% Sémillon and 15% Sauvignon Blanc aged 20-22 months in 100% new French oak. (Antonio Galloni) 92/Drink 2022-2042. 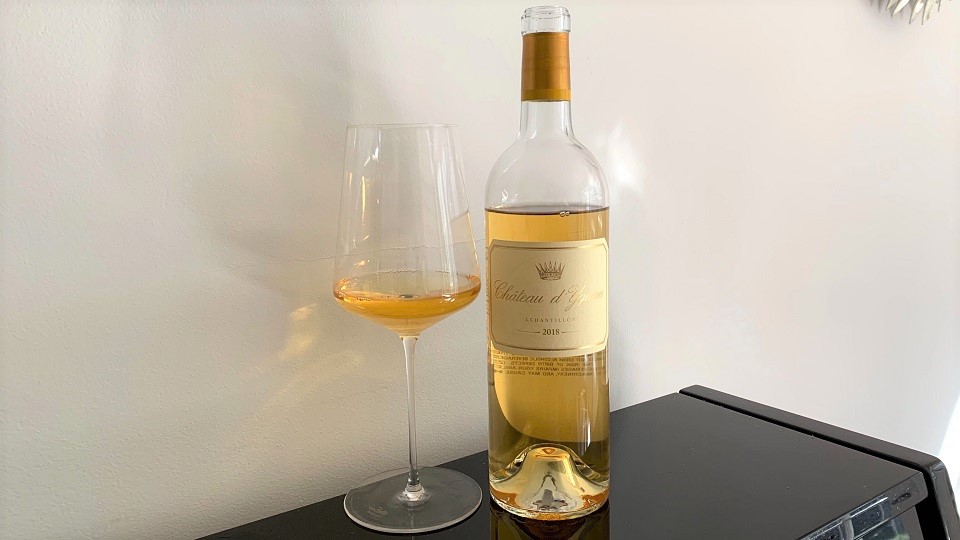 The 2018 Château d’Yquem “unfolded under tropical conditions” according to the château’s technical sheet, temperatures 2.7°C above average and this influences the style of the latest release. Noble rot spread after rainfall between 5 and 13 October, the picking commencing on 17 October with the heart of the harvest picked between 22 and 27 October. In total there was 17 days of picking. The final wine is a blend of 85% Sémillon and 15% Sauvignon Blanc, 13.50% alcohol (stated on the label) with 145g/L residual sugar and a pH of 3.95. I tasted the wine from two ex-château bottles on the same day. Firstly, in the morning, poured straight from bottle at room temperature into a regular Bordeaux glass. Lucid straw in colour, it is paler than recent vintages. The bouquet requires coaxing, certainly less intense than with pretty scents of dried honey, saffron and orange pith, a discrete Germanic tinge just off stage. The palate is understated on the entry. Modest in terms of complexity and certainly far from the most luscious Yquem that I have tasted in recent vintages, it offers appealing lemon curd, apricot and a dab of spiciness, stem ginger and lemongrass.

The second bottle was served in the evening at a lower temperature after a two hour decant in a smaller Zalto Sauternes glass. Now, this showed differently. The aromatics here felt more focused and energetic for a start - more drive. The palate revealed greater complexity thanks to decanting and certainly more tension, crucial to counterbalance that residual sugar. Overall, I do not believe that the 2018 Yquem belongs in the pantheon of great vintages of Yquem since it lacks requisite nuance, depth and complexity. It is a pretty and charming Yquem, maybe a sensitive one that needs to be served correctly, lest its shortcomings deriving from the growing season, not any winemaking decision, show through. (Neal Martin) 93/Drink 2024-2050.