In this second part of my look at the 2017 Burgundy vintage, after examining the whites back in August, I turn my attention to the reds. Travel restrictions eased in the interim, so we had a full complement of participants, and there was a much-needed sense of “back to normal” as we prepared to taste around 250 top-flight red Burgundies, all blind within their respective climats, over five days.

I will not go over the growing season; if you would like a refresher, feel free to read my summary included in the white Burgundy report. But I will return to my conclusion based on barrel tastings conducted in November 2019. In a vintage that I called a “modern classic”, I wrote: “Generally, while the 2017 reds might not be as concentrated as the previous two vintages, there is no way you can claim the wines are light. Not only are they imbued with real fruit intensity, but they also seem to be gaining density during their élevage, especially after their malolactic fermentation as they enter their final months in barrel. Who knows; the 2018s may well end up being less consistent and less dependable than the 2017s. Perhaps one disadvantage facing the 2017s is the scarcity of superstars or showstoppers like 2015 and 2016, and potentially 2018 also. It is not that kind of vintage. A benign season is not going to single out a particular soil type, vineyard, appellation or grower and elevate them to an ethereal plane that gets everyone excited. That lack of ‘headline action’ or ‘100-point stars’ ought not to devalue a growing season. Quality is evenly spread, and the winners are the consumers gifted more choice.”

Now that the wines are in bottle, there is inevitably going to be some discrepancy between barrel and bottle assessments, since every wine undergoes a different élevage, all wines have a proclivity to shapeshift during bottling, and, of course, this time, I am appraising them blind. But overall, most of the 2017 reds were consistent with my scores from barrel. Overall, they will appeal to those who appreciate leaner, more transparent Pinot Noir, those who suffer sleepless nights fretting that Burgundy will never be the same again after the hot summers of 2018 and 2019. The 2017s are generally fresh and vibrant, sometimes with crunchy textures, and certainly for the most part approachable, implying that this might not be the longest-lived vintage in recent years. 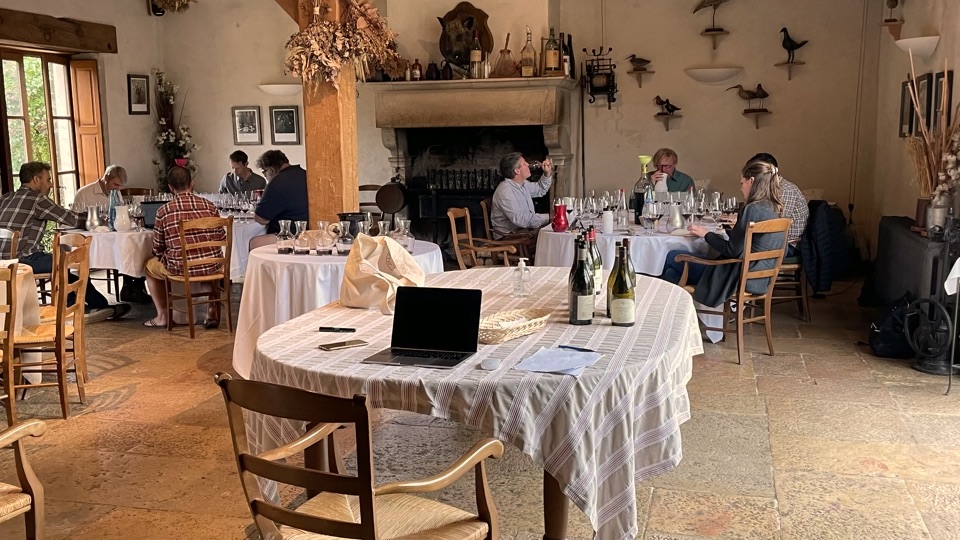 One of the aspects of this tasting that I like is the seclusion. Out in the middle of nowhere, you can really focus on the wines without distraction, apart from the scruffy old dog that occasionally wanders in to say bonjour.

There were a few growers who really impressed. I have followed the wines of former jet pilot Xavier Horiot at Domaine Launay-Horiot for a number of years. I am long overdue a return, not least because all three of his wines, two from Pommard and a stunning Latricières-Chambertin, trumped stiff competition. A trio from Jean-Pierre Guyon, based in Vosne-Romanée, also showed that this under-the-radar grower deserves attention, especially for his excellent Clos de Vougeot. Among the most established producers, there was a very consistent and strong showing from Domaine Bruno Clair, his Clos-Saint-Jacques beating the four others for the second consecutive year, while his Chambertin Clos-de-Bèze was one of my wines of the entire week. Chapeau, Bruno Clair and Philippe Brun! One useful aspect of Burgfest is that I can taste some domaines that are unavoidably omitted during my autumn marathon. For example, I was impressed by the consistency of Domaine François Buffet, now run by Buffet’s son Marc-Olivier from their Volnay-based winery. I would happily see all five of his 2005s on my dinner table. (I visited Buffet in October 2021, and a full complement of his 2020s will be included in my forthcoming report.)

Naturally, there were some upsets, as you would expect when reviewing 250 wines in a week. Bottles may simply not perform on the day; there were incidences of cork taint; and sometimes the bottled wine does not match the potential it suggested from barrel. What could explain the middling performances of Grivot’s Echézeaux and Clos de Vougeot given their excellent showings from barrel and their successful Richebourg counterparts? I was flummoxed by Domaine Armand Rousseau’s Gevrey-Chambertin Lavaux Saint-Jacques, which displayed an odd licorice scent on the nose, though the Clos Saint-Jacques is sublime. A misbehaving bottle? It happens.

Sometimes this blind tasting merely confirms why some domaines just do not appeal to my palate. In the past, I have criticized the wines from Domaine Christian Sérafin for being over-extracted and lavished with excessive new oak. It is always difficult because Frédérique and Karine Serafin are such amiable winemakers, yet the wines come across as a bit anachronistic, pursuing power and concentration instead of elegance and terroir expression. 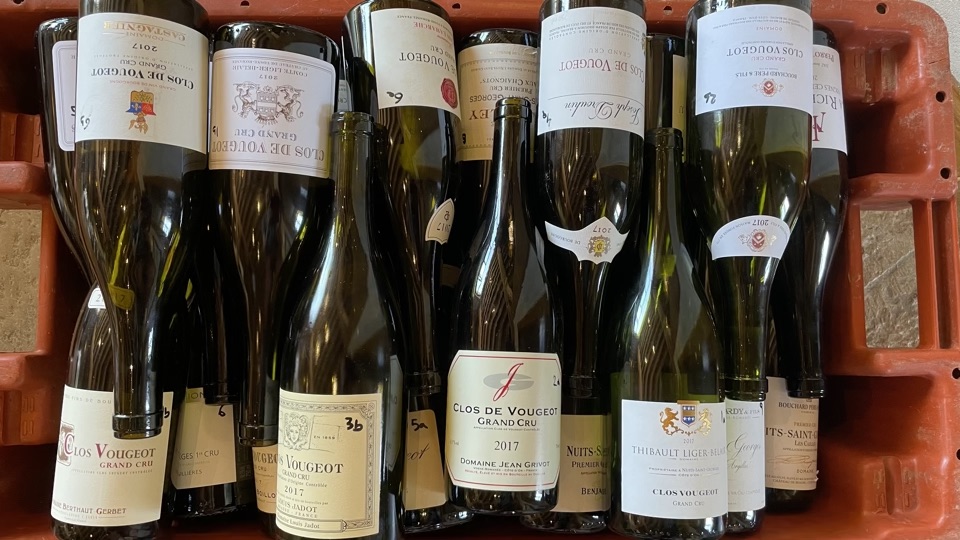 All the empties after a hard day at the coalface.

In terms of climats, as I wrote in my original report from 2018, it’s worth taking a look at Nuits Saint-Georges, too often given short shrift for lack of a Grand Cru. There was reassuring consistency here, whether we were looking at vineyards around Prémeaux-Prissey or more sumptuous wines from further north toward Vosne-Romanée. I was not the only Burgfest participant to commend the wines of Pommard, which is an appellation worth keeping an eye on at the moment; the growing dynamism is good to see. There was a trio of outstanding Les Rugiens from Domaine de Montille, Violot-Guillemard and the aforementioned François Buffet, not to mention a great Pezerolles courtesy of Domaine A-F Gros. The Corton Grand Crus were up and down, as expected, though I admired the 2017 Corton from Domaine Follin-Arbelet, which showed better than the Corton-Bressandes. Clos Vougeot perhaps surpassed my expectations; hats off to winemaker Jérôme Castagnier, especially since he sacrificed a career as a professional trumpeter to make wine.

I felt that 2017 was not the strongest year for Chambolle-Musigny, which provided fewer genuinely superlative wines than expected. In this respect, I found more excitement next door in Morey-Saint-Denis, with offerings such as Stéphane Magnien’s Les Faconnières or Dujac’s Morey-Saint-Denis 1er Cru, the latter proving that you do not need a specific vineyard name to make great Burgundy. Within Gevrey-Chambertin, Lavaux Saint-Jacques showed well, while Les Cazetiers was consistent. Moving up the ladder to the Grand Crus, both Ruchottes-Chambertin and Latricières-Chambertin shone brightly; kudos here to Henri Magnien’s stunning Ruchottes-Chambertin. Interestingly, when we totted up the average scores, not a single Chambertin approached Bruno Clair’s Clos-de-Bèze, which I will not apologize for mentioning twice because it was so good! Echézeaux was more consistent than other years, and here I will point to the 2017 from Domaine du Clos Frantin, or Albert Bichot, which equaled many more revered and – let’s face it – more expensive producers. 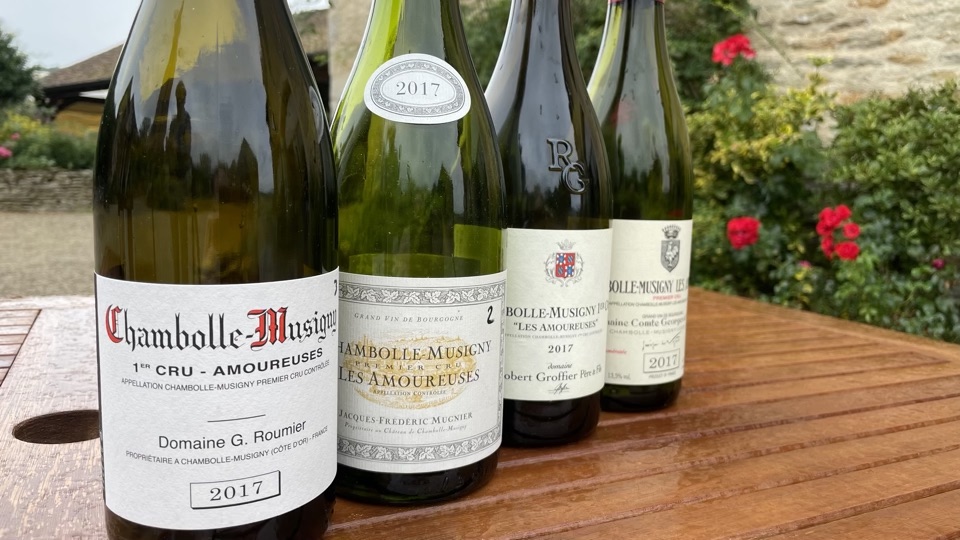 When it came to the Grand Crus in Vosne-Romanée, somewhat predictably, the 2017 La Romanée stole the show. For those whose wallet does not stretch that far, I was taken by the 2017 La Grande Rue. I also adored the 2017 Romanée-Saint-Vivant from Domaine de l’Arlot (readers can expect a examination of recent vintages in a future Vinous article).

This year we did not have too many corked wines. Since we record closures, I indicate within the tasting note those wines that do not use natural cork; most of these employ various types of Diam. I did find that occasionally the whole-bunch addition dominated the wine. I like the stems to be “there, but not there,” in the sense that the most skilled growers have the ability to blend high proportions of stems while maintaining a discreet, sometimes almost intangible, influence. There were perhaps occasions when the stems were not fully lignified, resulting in rather green elements that jarred with the fruit, which was not as plentiful as in 2015, 2016 or 2018. Generally, the 2017s are not wines that require long-term cellaring, though the most balanced will mature over 15 to 20 years, longer in some cases. It’s questionable whether we will see the likes of 2017 in the Côte de Nuits again if global warming continues. If you like red Burgundy with floral aromatics, lower alcohol, less obvious fruit and crisp tannins, this “modern classic” has much to offer. 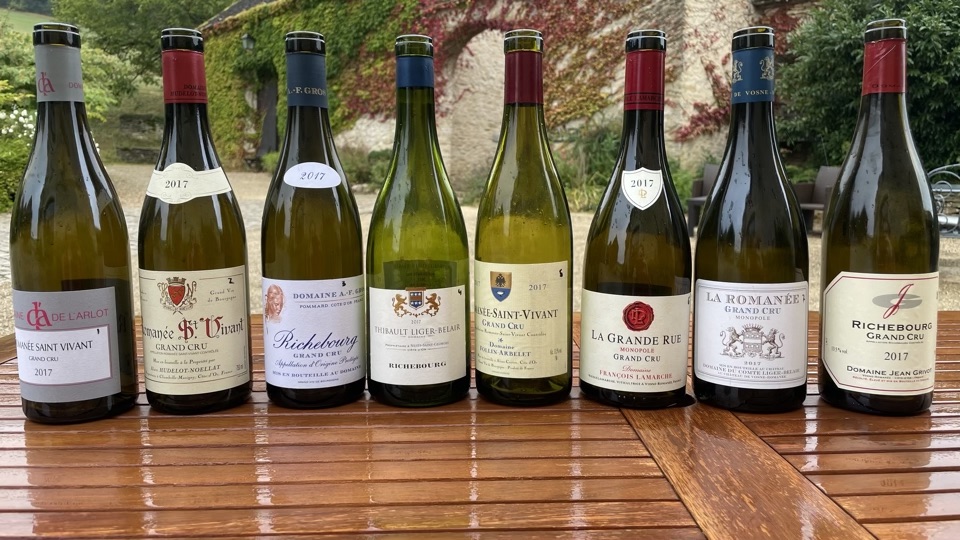 In 2021 I managed to attend both Burgfest tastings that had been postponed from 2020. I hope the 2018s can be examined in similar fashion in 2022, because this is a unique tasting, the only one where top Burgundy wines are appraised blind against their peers. Given the price tags attached, this exercise is more important now than ever before.

Through the Other Side: Burgundy 2016 in Bottle, Neal Martin, October 2019