The problem with today’s wines is that standards have risen.

Before fulminating on the forum that “Neal Martin has lost it again,” allow me to explain. You see, it can become a bit boring when wine writers are tasked with describing wines that run the gamut of quality from “very good” to “excellent.” In the same way that actors find baddie roles more fulfilling, you can feel a perverse kind of relief when sub-par wines oblige a different lexicon. Of course, if the subject is a new release, you must tell the truth while remaining mindful that we are talking about people’s livelihoods. It is not necessarily the winemaker’s fault. You cannot mitigate a sudden late spring frost, an outbreak of gray rot or a harvest downpour, and therefore I try to temper my language and land the punch respectfully and, if possible, constructively. When the subject is a mature vintage, the passing of time acts as a buffer between winemaker and wine. He or she becomes less emotionally attached, the vintage has long been sold, and consequently winemakers tend to be more honest and frank; wine writers do too.

The subject matter of one of Sarah Marsh MW’s extremely useful Burgundy retrospectives was the infamous 2003 and 2004 vintages. Readers should note that all the bottles at these tastings came directly from the respective domaines’ cellars. Last year I folded the tastings into my “Mature Burgundy” report; however, 2003 and 2004 are so intriguing that I decided to keep them separate. I remember tasting both on release and immediately placing them in my rogues’ gallery. Neither impressed me, for different reasons. The incessant heat in 2003 shaped a raft of rather glossy, buxom Pinot Noirs that translated the sunshine hours more than the nuances of each vineyard. Then the distasteful vegetal notes of 2004 made spitting them out the most enjoyable part of tasting some of those wines. But maybe my reservations toward both had been misplaced. Could the 2003s have turned out as fresh as a daisy and the 2004s somehow eradicated greenness with maturity? Here was a chance to find out. 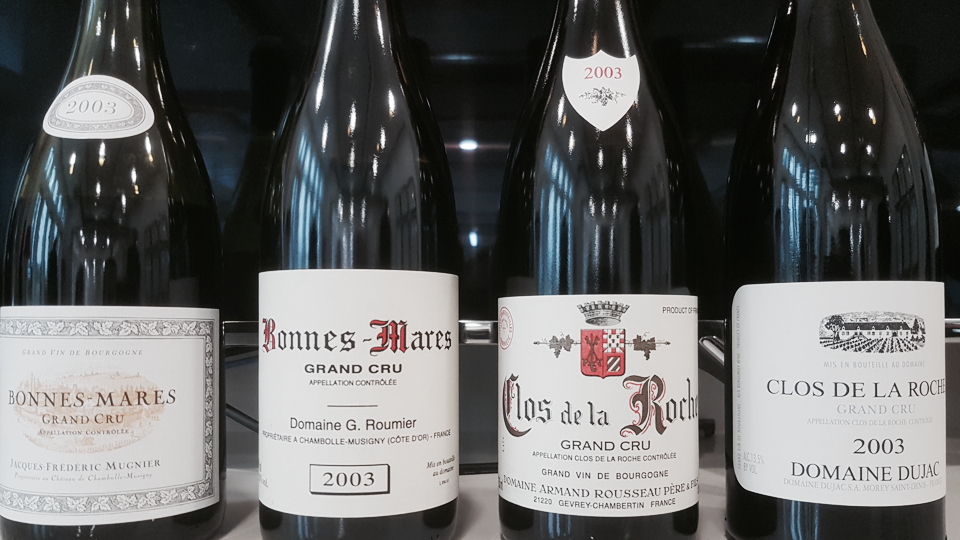 Two thousand and three was an infamously freaky growing season. The weather started heating up from June, and after a cooler beginning to the following month, the mercury began soaring again, to record levels. It should be remembered that it was not the heat spikes that made 2003 unique; it was the duration of the heat wave that defined the growing season. Between August 4 and 13, the thermometer topped 40°C, and unsurprisingly, the Ban de Vendanges was declared for August 18, just 80 days after flowering. The early harvest caused logistical problems in terms of recruiting harvesters, many of whom were sunning themselves on faraway beaches, not to mention the difficulty of choosing exactly when to pick as sugar levels rocketed and the sauna-like vat rooms risked spontaneous alcoholic fermentation and spoilage (this vintage predated the portable refrigerated cooling units that are now often parked outside wineries in warm harvests). The resulting wines predictably bore all the hallmarks of a hot vintage, with high alcohol levels and high pH levels, prompting many winemakers to acidify.

In parallel to an argument that I put forward in last year’s 2018 Burgundy report, where I posited that a hot growing season can advantage the ever-adaptable Chardonnay over sensitive Pinot Noir, surprisingly, the white 2003s have generally aged better than their red counterparts, recovered from the stürm und drang of the growing season and settled down in bottle. That said, over the years I’ve found that winemakers speak fondly of not just their 2003 whites, but also their reds. I suspect that is partly because some exceed their low expectations after bottling, exemplifying how terroir can overcome even the most challenging conditions. Fair enough. Personally, while I agree that some reds have indeed matured better than envisaged, when forming part of multi-vintage verticals, the 2003s rarely feature among my favorites. Frequently, I find that the imprimatur of that summer’s heat is too strong, rendering the wines enjoyable yet rarely intellectual or terroir-driven, a shortcoming that is highlighted when juxtaposed against other vintages.

This was borne out by the twenty-odd 2003 reds from various growers and vineyards. They weren’t bad; not at all. But neither did they compel me to revise my lukewarm view of 2003. It remains an intriguing vintage within the panoply of recent growing seasons, but not one I recommend buying in lieu of others. This tasting was a salient reminder that even the best terroirs and winemaking skill are not necessarily sufficient to create outstanding Pinot Noir. For example, I enjoyed the 2003 Bonnes-Mares Grand Cru from Domaine Georges Roumier and the 2003 Clos de la Roche Grand Cru from Domaine Armand Rousseau, though I might prefer to drink their respective 2002 Village Crus if given the choice. Moreover, I cannot see much advantage in continuing to cellar them long-term. Sure, they deserve applause for lasting longer in bottle than predicted, but I cannot foresee them going anywhere interesting; many are demonstrating vinous arrested development. You risk losing that youthful veneer of sweet fruit that can make the best 2003s quite sensual in a kind of “slutty” way.

Even though I have reservations toward the 2003 reds, the following vintage is one that I have never liked and often abhorred. That’s a strong sentiment. But I have lost count of vertical tastings where the 2004s not only represent the low point, but are so distasteful that I rinsed my mouth afterward in order to wash away their nasty vegetal streak. It’s as if the 2004 reds give you the middle finger before departing. 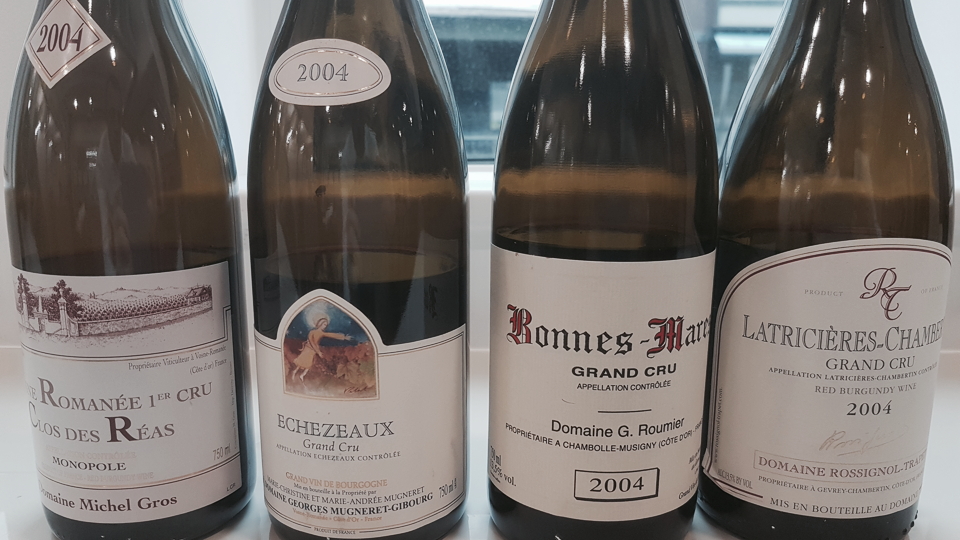 Theories abound as to where this vegetal element comes from. The growing season was marked by a rather indifferent summer with cool and cloudy spells interspersed with violent thunderstorms; the vintage was saved by clement, sunny conditions from late August into the first half of September. It was vital for growers to rigorously sort their incoming crop to weed out unripe fruit. Given these conditions, the aggressive greenness cannot surely be attributed to the climate, since similar growing seasons are not besmirched in the same manner, even if some claim the 2011s display similar traits. Another idea is that sulfur added at bottling combined with natural sulfur as a product of the growing season and caused a kind of herbaceous reduction. This does not hold water for me. Why has it not occurred in other growing seasons, notwithstanding that there are far too many experienced and talented winemakers who are meticulous about sulfur levels whose wines are plagued with the problem? Third is the “ladybird” (lady beetle) theory. The insects infiltrated the de-stemmers and infected the must with what writer Jasper Morris MW describes as “a ladybird version of formic acid.” Morris himself has always doubted the idea; however, it has always been the most logical in my mind, and Burgundy writer Bill Nanson maintains that he witnessed ladybirds crawling in places you wouldn’t want them crawling in the winery during fermentation. It would explain why the taint is so endemic across practically every producer’s 2004 that I encounter. I also disagree with some who argue that the taint is receding with bottle age. Not in my experience; in fact, almost the opposite seems apparent.

This was proved by the (thankfully) small sample of 2004s on display.

They were linked by the same herbaceous element and subsequent distasteful residue, and on this occasion only Rossignol-Trapet’s 2004 Latricières-Chambertin was spared. These wines reconfirmed that the taint cares not who you are or where your vines are planted. You may think that my score for Christophe Roumier’s 2004 Bonnes-Mares is horribly mean... until you actually taste it. In fact, I remember emailing Roumier after tasting this exact wine just after bottling and rather impudently asking whether there was anything wrong with the bottle. Roumier typically answered politely, although annoyingly, I have long since lost his reply. The 2004s in this tasting merely reinforced my dislike, and though I occasionally hear murmurings that time and bottle age are gradually remedying this affliction, let’s face facts: These wines should be approached with a long barge pole and all the pessimism you can muster. 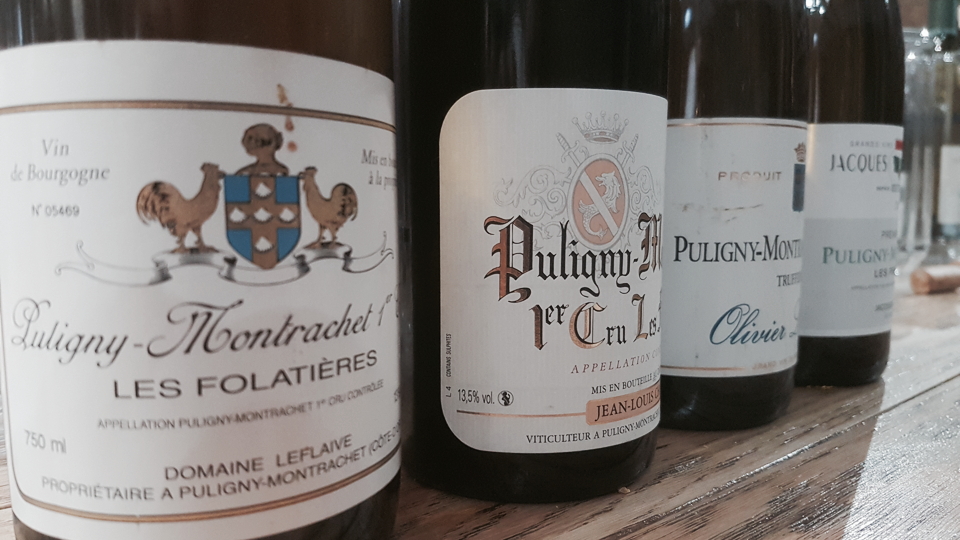 A few weeks later, Sarah Marsh organized another tasting that I have blended into this article, if only because I did not want to come over too negative. This focused on 2010 Burgundy wines, and I subsequently augmented the notes with a half-dozen additional wines from a 2010-themed dinner earlier this year. Both white and red 2010s evidence an exceptional vintage, though perhaps given consumers’ propensity to drink whites young, perhaps due to fear of premature oxidation, fewer bottles rest in cellars after a decade than might otherwise have been the case. That is a pity, if completely understandable, because this selection attests to a vintage that is repaying cellaring – and not just at the top end. 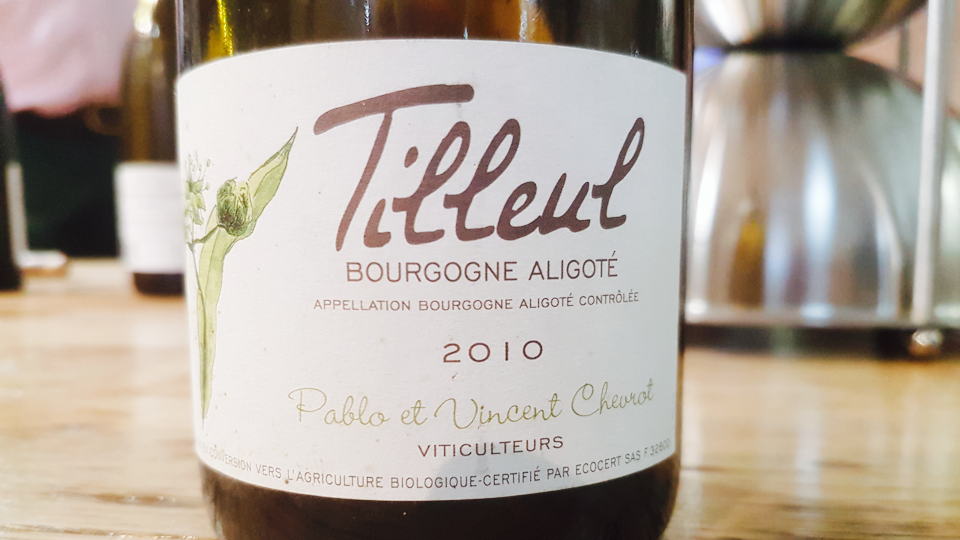 I have been banging on about how Aligoté is underestimated vis-à-vis Chardonnay, and indeed, Domaine Chevrot’s 2010 Bourgogne Aligoté continues to offer more pleasure at 10 years of age than all those 2004 reds combined. This little gem comes from a 0.35-hectare parcel of organically farmed vines worked by horse, which gives you an idea of the care that winemakers and “Les Aligoteurs” members Pablo and Vincent Chevrot invest into this cuvée. Generally, the 2010s have maintained their freshness, tension and salinity, the pick of the bunch being the 2010 Puligny-Montrachet Les Combettes 1er Cru from Domaine Leflaive. Our bottle showed no signs of premature oxidation, and I hope yours doesn’t either, since this really showed the greatness of this vineyard and, indeed, the skill of the late Anne-Claude Leflaive. On a tighter budget? Hunt down a bottle of 2010 Chassagne-Montrachet Les Vergers 1er Cru from Domaine Marc Morey or 2010 Chassagne-Montrachet Morgeot 1er Cru from Domaine Bernard Moreau. In my experience, the 2010 Burgundy vintage did not put a foot wrong, and it is fast becoming my favorite of the last 20 years.

So yes, returning to my opening line, of course I was playing devil’s advocate. Sure, the problem with today’s wines is that standards have risen.

Through the Other Side: Burgundy 2016 in Bottle, Neal Martin, October 2019