“Am I going too fast?” Lalou Bize-Leroy asks as she takes me through her bottled 2016s. Not a chance. One of the first things I observed when I started visiting the domaine years ago was Lalou’s intense pace, which remains pretty much the same today. “I like to taste quickly,” she adds. “With wines its either ‘yes’ or ‘no’. There is no middle ground. Just like people.” That insight is one of many that emerge over the course of this remarkable survey of the 2016s. 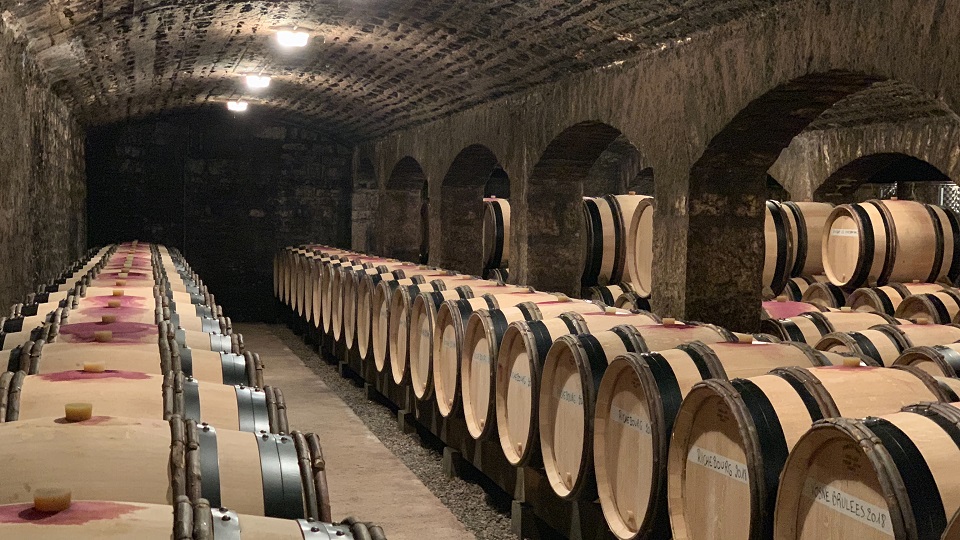 The cellar at Domaine Leroy, Vosne-Romanée

“It is a tiny, tiny crop, even smaller than 2012,” Lalou Bize-Leroy explained. “We had frost, and then some mildew in certain sites that required considerable work in the field.” As always, the 2016s were done with 100% whole clusters and aged in 100% new French oak. The wines were bottled between the end of 2017 and early 2018, which, is on the earlier side of things by present-day standards in Burgundy, especially at the Grand Cru level.

Given the tiny production, I expected the 2016s to be even richer than they typically are. Instead, I was completely blown away by the elegance and finesse of the wines. The Leroy 2016s are striking, transparent Burgundies that pulse with energy and the expression of site that Bize-Leroy cherishes above all else. 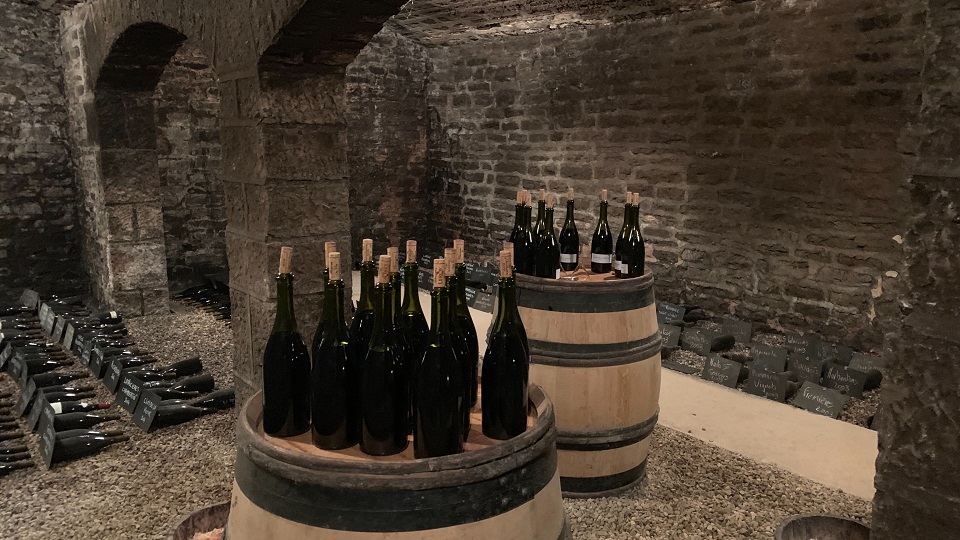 The complete lineup of bottled 2016s at Domaine Leroy

The village level wines are, frankly, magnificent. Leroy’s Pommard Les Vignots, the first wine in the tasting, shows the pedigree of 2016 to grand effect. The Vosne-Romanée Les Genaivrières is superb, while the Chambolle-Musigny Les Fremières is a Burgundy of pure and total seduction. Moving into the 1er Crus, the Savigny-lès-Beaune Les Narbantons is another wine that shows the extra dimension of finesse of the vintage. What a gorgeous wine it is. The pair of Nuits-Saint-Georges, Vignerondes and Boudots, make for a fascinating exploration of terroir. The same is true of the two Vosne 1er Crus, the Brulées and the Beaux Monts, which Chez Leroy emerge from adjacent parcels. Like the village Chambolle, the 1er Cru Les Charmes is magnificent. It is one of my favorite wines of the tasting. The Gevrey-Chambertin 1er Cru Aux Combottes is another wine that is especially finessed in 2016.

“Now we move to the serious things,” Lalou says with her characteristic mix of irony and wit as longtime colleague Frédéric Roemer prepares a mind-boggling array of Grand Crus. The wines are off the charts. I have a personal connection to the Corton-Renardes because it is the first Domaine Leroy wine I ever tasted. But the Grand Crus I find most compelling are the Romanée Saint-Vivant, Musigny, Latricières-Chambertin and Chambertin because to me they embody one of the most essential qualities of top-flight Burgundy, and that is a feeling that the wines have a certain dimension of mystery and complexity that is not fully comprehensible or easily captured with words - an attraction that is never ending, and that always invites another taste. 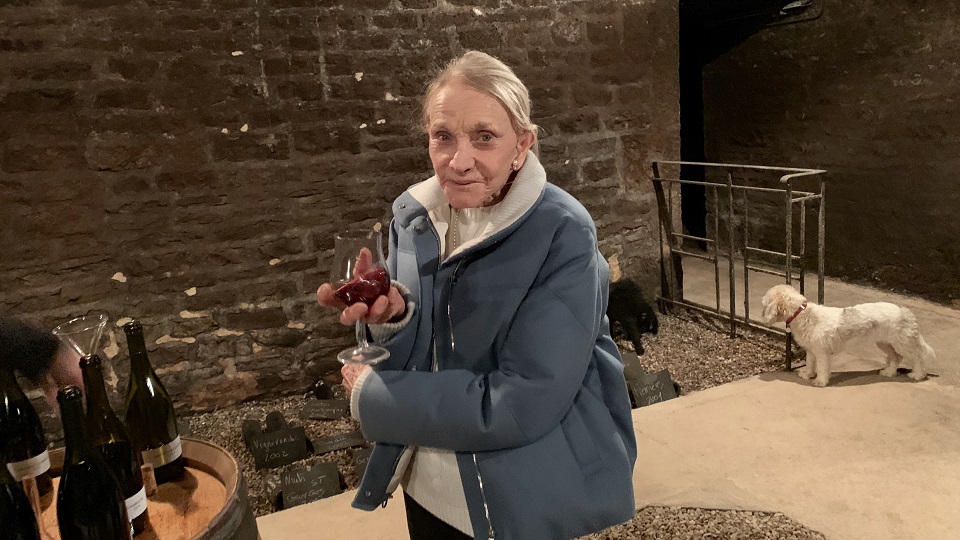 Yes, the photo is a bit blurry, but it is hard to keep up with Lalou Bize-Leroy

We return to the topic of tasting through wines at a brisk pace. “You have to trust your first impression,” Lalou continues. “When you waffle, when you go back and forth, that’s when you make mistakes.” Of the Romanée Saint-Vivant, Lalou adds “she is nothing next to what she will be…complex, just like a woman.” Of the Musigny she says, “well, it's certainly not  a Viennese waltz, that’s for sure. More like Bach,” an interesting comparison, to be sure. I see more of the dramatic sweep, scale and dramatic intensity of Mahler. No matter, the wine is tremendous. Lalou is probably the only producer in Burgundy who would refer to Clos de La Roche as “an easy wine,” but she is never one to mince words. 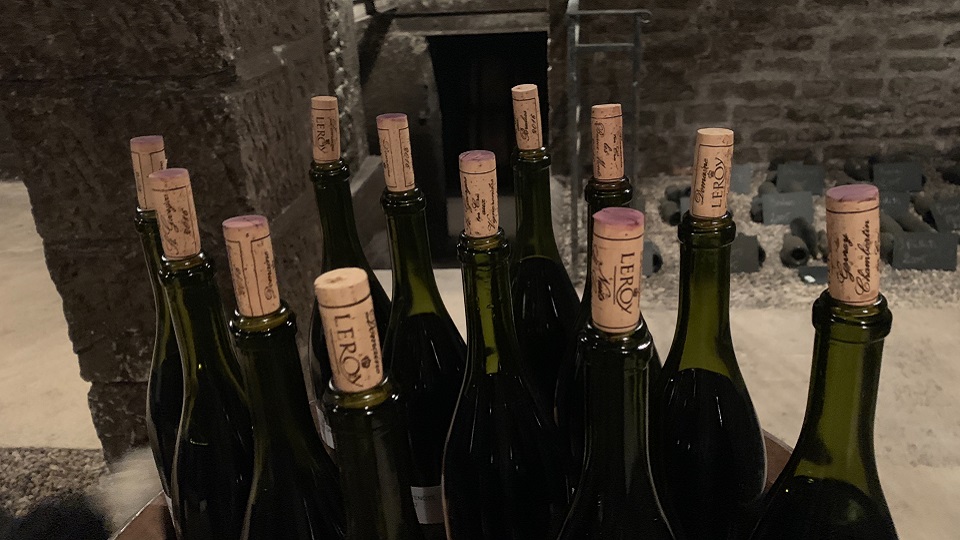 A stunning edition of the Corton-Charlemagne wraps up the tasting. “Low yields are absolutely essential for Pinot Noir in Burgundy,” Lalou opines. “It is not easy to do things the way we do. But I love my old vines and my countryside. It would be far simpler to just produce 50 hectoliters per hectare, but that is not work. People think Chardonnay can do well with higher yields. I disagree.” Well, it's hard to argue with a grower whose whites start to drink well at 15-20 years of age and typically develop graciously for decades beyond that. I think back to all of the older whites I have had a chance to taste here over the years, including a breathtaking 1964 Maison Leroy Meursault Genevrières Lalou showed me in 2014. “The 1964 is just starting to drink well now,” she commented matter of factly back then. The track records of both Domaine Leroy and Domaine d'Auvenay are shorter, but thus far just as impressive.

In recent years, the Leroy wines have become virtually impossible to find, while prices have rocketed into the stratosphere. There is no way to ignore that. As for the wines themselves, they represent the pinnacle of expression from some of the world’s greatest and most historic sites, as interpreted by Lalou Bize-Leroy, who remains very much at the top of her game.