Domaine de Cristia is located in Courthézon, east of the town of Châteauneuf-du-Pape, just a few steps away from Domaine de la Janasse. Etienne Grangeon established the estate in 1942 with just 2 hectares of Grenache vineyards. His son, Alain, joined the domaine in 1963 and expanded the family’s holdings. Baptiste and Dominique, the third generation, arrived in 1999 and began vinifying parcels separately, creating new cuvées. Since then, Dominique and Baptiste have been increasingly conscientious in working their vineyards with natural methods. In 2008, the Grangeons obtained an organic certification from ECOCERT. 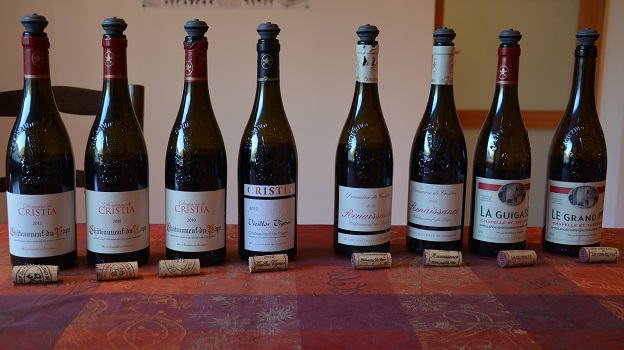 Today, Domaine de Cristia owns 20 hectares in Châteauneuf-du-Pape, all located in the eastern part of the appellation. The vast majority of these vineyards are within the Cristia lieu-dit, which has a northeastern exposure and is mainly composed of sand and clay. The domaine also owns a parcel within the La Roquette lieu-dit, where the terrain is mostly pebbles. The exposure and soil of Cristia gives wines a natural sense of finesse and freshness. Wines from the La Roquette, on the other hand, display ripeness and richness.

After harvest the grapes are sorted and then fully destemmed. Fermentation is carried out in concrete tanks for three weeks, and temperatures are intentionally kept low temperatures in order to preserve aromatics. Aging takes place in vats and barrels, with a percentage of new oak.

Stylistically, the wines of Domaine de Cristia are very elegant and tend to display a beautiful sense of freshness. This is largely attributable to the soil composition and exposure of the dominant parcel in the Cristia lieu-dit, and because of the moderate extraction during fermentation. The regular Châteauneuf-du-Pape is an ode to an almost feminine style, while the other cuvées are made in a more modern style, with some new oak influence.

In 2009, Domaine de Cristia partnered with importer Peter Weygandt to create the Chapelle Saint-Théodoric project. From three hectares of vines owned by Peter Weygandt in the Guiguasse and Pignan lieux-dits (both located in the eastern part of the appellation), Chapelle Saint-Théodoric produces two very traditional Châteauneufs: Les Grands Pins and La Guigasse. The Saint-Théodoric wines present stark contrast to the wines the Grangeons make at Domaine de Cristia. Dominique Grangeon, who is very excited by this new project, told me the process has been quite educational, and that she is learning a lot from working in both styles. 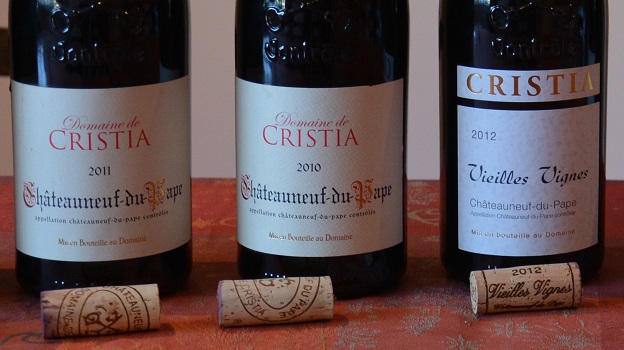 The Châteauneuf-du-Pape is a blend of 70% Grenache, 15% Syrah and 15% Mourvèdre coming from 50 year-old vines planted on soils made of sandy marl and clay. The Grenache is aged in concrete tanks for 16 months, and the Syrah and Mourvèdre are aged in 2-3 year old barrels. Alcohols come in between 14% and 15%.

The Châteauneuf-du-Pape Renaissance is a cuvée made of 60% 100 year-old Grenache vines and 40% Mourvèdre. The vines are planted in a soil composed of clay and sand with an eastern exposure. The Grenache is aged in 2-3 year old barrels and the Mourvèdre is aged in new oak vats for twelve months before being assembled, after which the blended wine is aged for an addition six months in vat. The wine reaches about 15% alcohol.

The Châteauneuf-du-Pape Vieilles Vignes is a cuvée made solely from 85 year-old Grenache coming from the same type of soil as the Renaissance - clay and sand. The wine is aged in 2-3 year-old barrels for 15 months, and then in concrete tanks for an additional month.

The 2012 Châteauneuf-du-Pape is a clean and balanced wine, with an expressive bouquet that features floral tones and some mara des bois. This elegant offering is intense but fully controlled, with gorgeous texture and a note of incense on the finish.

The 2011 Châteauneuf-du-Pape is an outstanding wine. It offers both terrific vintage expression and great overall balance. The palate is round and slightly glycerine in feel, with ample notes of cherry, blackcurrant and blackberry. A beautifully balanced wine with a slightly tannic backbone.

The 2010 Châteauneuf-du-Pape is a much more concentrated, rich and intense wine than its 2011 and 2012 siblings, but manages to remain elegant. The bouquet is rich in strawberry, licorice, star anise and blackcurrant. This beauty elegantly concludes with a precise and clean finale. A gorgeous effort with tremendous potential.

The 2012 Châteauneuf-du-Pape Vieilles Vignes is an outstanding effort. Made out of old-vine Grenache aged in 2-3 year old barrels, this cuvée is very modernist. The oak is present but very well integrated. The aromatics are laced with notes of incense, toasted exotic wood, and garrigue, grandly surrounding delicious notes of blackberry and Provençal herbs. A closing hint of iodine adds complexity.

The 2010 Châteauneuf-du-Pape Renaissance is a blend of 60% Grenache and 40% Mourvèdre, the latter aged in new oak for twelve months. Darker and definitely more introspective than its counterparts, the 2010 Renaissance offers intense notes of blueberry, dark berries, and smoked herbs. Regretfully, its ample mouth is marred by reductive notes that are not fully integrated. The 2010 offers solid potential but is held back by a slightly oxidative note.

The 2009 Châteauneuf-du-Pape Renaissance is quite marked by the heat of the vintage. Its nose and mouth are quite warm, offering ripe - but not candied - notes of dark fruits, while the finish is quite tannic.

The Châteauneuf-du-Pape La Guigasse is 100% Grenache coming from the Grand-Pin lieu-dit, which is composed of sand and clay. The wine is fermented using whole clusters and is aged in demi-muids.

The Châteauneuf-du-Pape Le Grand Pin is also Grenache, but coming from the Pignan lieu-dit, which is characterized by sandy soils. This wine is also fermented using whole clusters and is aged in demi-muids.

The 2011 Châteauneuf-du-Pape La Guigasse is 100% Grenache from the La Guigasse lieu-dit. The Grenache is fermented using whole clusters and aged in demi-muids. Light, fine, and elegant, this traditional Châteauneuf shows notes of pine wood, mara des bois and some incense. It is well-balanced in the mouth, yet today it lacks a bit of precision and cleanliness.

The 2011 Châteauneuf-du-Pape Chapelle Le Grand Pin is made only of Grenache from the Pignan lieu-dit, very close to the vineyards of Château Rayas. Slightly more extracted and concentrated, this austere wine shows riper aromatics and offer additional notes of Provençal herbs. Definitely too young or in the need of extended decanting, the 2011 concludes with beautiful notes of incense and firewood.