Northern Rhône: A First Look at the 2019s

While my late-winter visit to the northern Rhône focused primarily on tasting the 2017s and bottled 2018s, I also had a chance to try a good number of 2019s. Like 2018, 2019 was a hot and dry year, but the wines look extremely promising and show an uncanny blend of depth and vivacity.

I arrived in the northern Rhône at the end of February and worked for the first two weeks of March, then departed on Friday the 13th, just a day before COVID-19 travel restrictions began. It was good timing in many ways, not only because I was able to sample a good number of 2019s in producers’ cellars, all of which had finished their malolactic fermentations, but I also made it home safely and without any inconveniences. 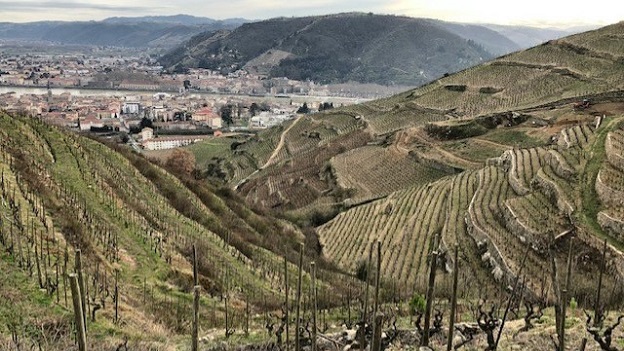 Some of the most complex and age-worthy wines in the world come from the granitic soils of the Hermitage hill.

What follows is my first look at the young 2019s. Readers should consider my scores for these wines highly provisional and subject to small – I hope only minor – revisions when I revisit them on my next trip, whenever that might happen. Still, 2019 is clearly a vintage of extremely high quality and marks the fifth straight stellar year for the region. A number of producers who aren’t prone to hyperbole told me they think 2019 and 2015 are the most impressive of this recent run of great years, but for different reasons. It’s rare to find real freshness and detail in wines from a year that was as hot and rain-bereft as 2019, but paradoxically, that’s indeed the case.

Two thousand nineteen endured an abnormally hot and dry growing season by historical standards (though fairly typical now, by current measures) that started off with pockets of spring hail and frost but nothing so major as to precipitate a short crop. The hot, dry summer that followed definitely induced some angst among the growers, who noted that it was critical to maintain healthy vine canopies to protect the grapes from the heat and sun. Fortunately, for those making such a viticultural move, there was basically no rain during the summer, meaning that mildew that might have formed under the canopies was a non-issue. Also, while it was definitely hot, temperatures were not excessive. Well-timed and beneficial rains in late August and early September helped freshen the vineyards and keep acidity levels sound.

There was a healthy crop load in most appellations except for the hail-ravaged southern sector of Crozes-Hermitage, which saw many of its vineyards (and apricot and peach trees) completely decimated on June 15. The storm only lasted about 20 minutes, but the hailstones were the size of tennis balls and winds were clocked at up to 60 kilometers per hour. The fruit loss in some spots was total, and most of the producers I visited who have vines in the area, especially at Chassis, said they lost at least 50% of their fruit. 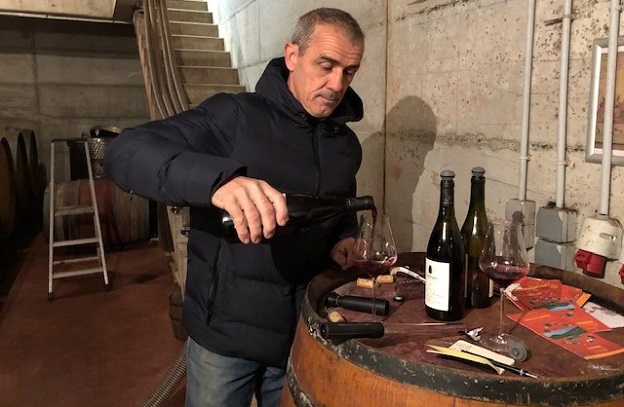 Franck Balthazar owns a number of choice parcels of in Cornas and makes some of the most elegant wines in the appellation.

A Lot of Grapes, but Not Always Much Juice

A major issue across the region was high skin-to-juice ratios because of the thicker-than-normal skins of the grapes (courtesy of the weather), which was the opposite of 2018, another hot year but one where the plump berries almost universally gave up a healthy amount of juice. That meant winemakers had to be careful with their pressing, many of them said, so as not to extract too much from those grapes and, as a consequence, give the juice too much skin tannin impact. Fortunately, almost every serious producer in the northern Rhône today, as elsewhere in the world, now possesses modern equipment that allows for gentle pressing. In 2019, that was a huge blessing. Another positive, in my opinion, is that the perfect ripeness that was achieved allowed many producers to increase their use of whole clusters, thanks to the fully lignified stems. That practice helps to add aromatic complexity to the wines and, while it can raise pH levels, no grower I visited told me they were fearful that higher stem inclusion would cause a negative effect (meaning diminished energy) on the fermenting juice.

As I noted earlier, the 2019s are still at quite an early stage of their development, but based on what I tasted, I’m confident enough to make what I hope is an educated guess as to how they’re going to turn out. It’ll be fun to see how right or wrong I was later this year (fingers crossed). 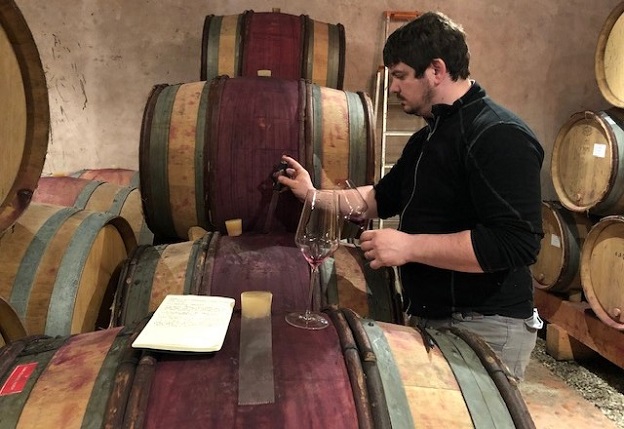 Guillaume Clusel pulls samples of his 2019s in his family's Clusel-Roch cellar.

My strong suspicion is that the 2019 vintage is going to be getting some serious hype, much of it well deserved, which will likely put its 2018 siblings in the shade, and 2017 as well. That could create some real buying opportunities, as the spotlight is trained hard on the shiny new (if excellent) thing that is 2019. 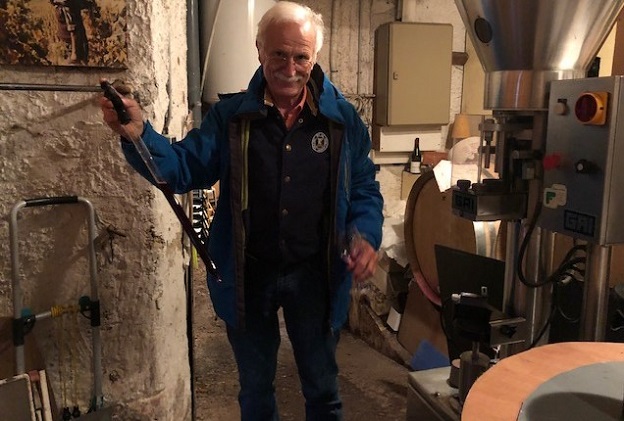 Sampling the 2019s with Bernard Faurie in his tiny cellar in Tournon.

In addition to the 2019s, I also had an opportunity to taste a number of 2018s that had not yet been bottled as of my February/March 2020 visit. For ease of reference, I have included my summary of the vintage, as published in my previous article, Power and Energy: The 2018 and 2017 Northern Rhônes.

Two thousand eighteen was an up-and-down vintage for growers in the northern Rhône. The year got off to good start, with a wet winter that replenished groundwater reserves, on-time flowering and cool weather that allowed for slow, steady maturation. Unfortunately, heavy June rains in the southern sector, particularly at Cornas, brought on mildew, which resulted in crop loss in some sites. At the end of June, the weather took a sharp turn to sunny, dry and hot conditions, which accelerated ripening.

Because of the kick-started ripening in July and the hot weather that followed, many producers opted, or were forced, to pick their fruit on the early side, at the beginning of September and in hot weather. A few of the producers I visited mentioned that in 2018 phenological ripeness in many cases wasn’t fully attained until the fruit reached about 14.5% potential alcohol, while in the past, it was generally achieved when the grapes hit anywhere from 12.5% to 13% potential alcohol. 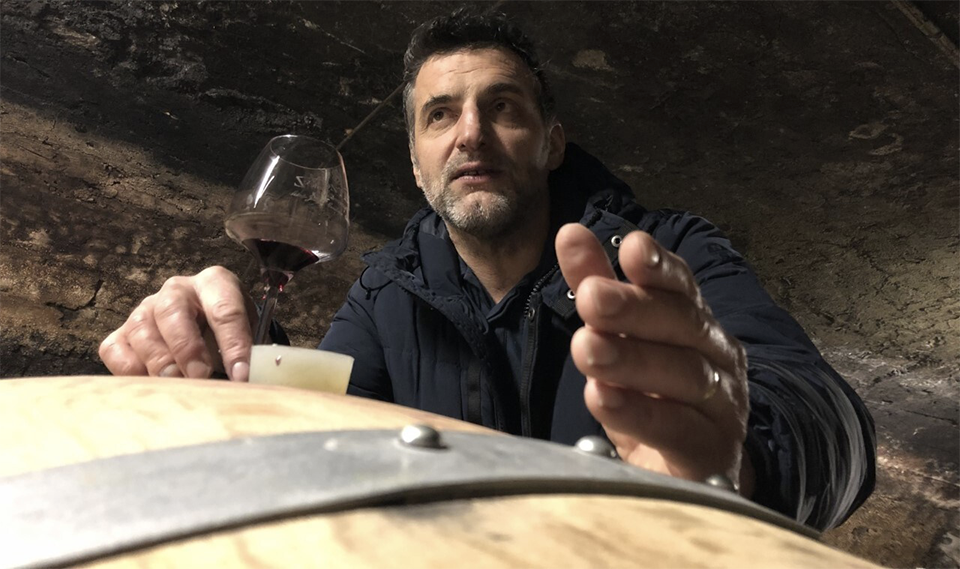 Stéphane Montez, who represents the tenth generation of his family in Saint Michel-sur-Rhône gives his thoughts on the 2019 and 2018 vintages.

There was the obvious danger of dropping acidity levels and rising pHs, and, as many vignerons pointed out, the fruit components of the wines’ aromatic and flavor profiles, while energetic in character, do lean toward more dark character than red, even in Côte-Rôtie. Yields were generally healthy across the region, especially in Côte-Rôtie and in the northern sector of Saint-Joseph, where quantities were robust and sometimes even on the high side, which also likely contributes to the wines’ energy. Still, based on what I saw during my extensive cellar visits during the first two weeks of March, roasted qualities and flabby textures were rarely to be found, which was a pleasant surprise.

Thick skins meant healthy tannins, possibly even excessive, if growers didn’t keep an eye on their vine canopies. Those tannins have given the wines good structure, which should help them age well, even if the wines’ juiciness will make them deceptively approachable, which is by no means a bad thing. I imagine that plenty of wine lovers will enjoy the 2018s pretty much right out of the gate, but in most cases, they are definitely worthy of patience, even just a little. I generally found more vibrancy to the 2018s compared to their 2017 siblings, and more weight than the 2016s (which, by the way, are starting to show their elegant side more and more lately). In 2018, a number of producers who use whole clusters upped the percentages, as the heat ensured ripe stems, thus mitigating the possibility of too much green character in the final wines. Those stems, numerous producers pointed out, help to maintain freshness, not to mention bringing greater aromatic complexity. I’m seeing more and more producers, especially the younger generation, making increased use of whole clusters, and it’s a trend that I can happily get behind.

I tasted all of these wines in the producers’ cellars during my late February and early March 2020 trip to the region.