The 2015 Northern Rhônes: Outstanding Wines for the Long Haul

For wine lovers who favor richness, weight and emphatic flamboyant fruit, 2015 will be a vintage to dive into, deeply. While I suspect that all but a few wines will be rather monochromatic on release, I’m confident that time will bring greater complexity and somewhere-ness to the ‘15s – and they definitely have the concentration to age. Patient wine lovers who heed what many producers and wine lovers call the “15-year rule” for northern Rhône Syrah and allow their 2015s to lose some baby fat for a decade and a half will be richly rewarded, but those hoping to find nuance and detail during the first few years after the wines hit the market may wonder what the fuss is about. 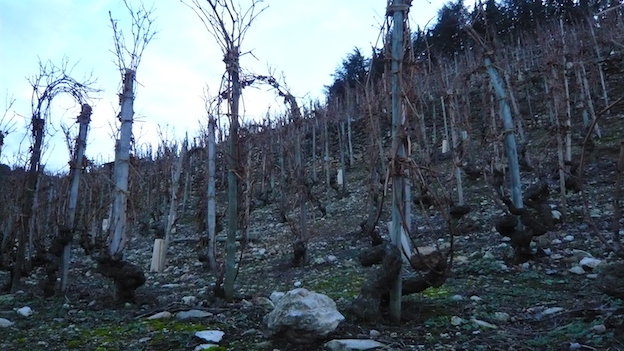 The tannins in the 2015s are definitely present but they’re not strict, as they often were in the 2010s and 2005s when I tasted those wines from barrel at a similar stage of development. In that regard the ‘15s show some resemblance to the often excellent and sometimes decadent 2009s, which as a group have yet to actually shut down. But the ‘15s, as a rule, are fresher than the ‘09s, which come across as broader and weightier. I believe that the ‘15s will always show better delineation and lift than their ’09 siblings because they possess the energy to buffer their ripeness. But I should emphasize that we’re speaking in relative terms here as few people will be able to call the ‘15s graceful or elegant wines unless they’re comparing them to the richest New World renditions of Syrah, or Shiraz.

The 2015 growing season was preceded by a rainy winter that replenished water tables that had suffered through drought-like conditions since 2011. The months that followed were warm to hot but not excessively so, and well-timed, beneficent rains and, even more important, cool nights allowed the fruit to mature steadily and to maintain healthy acidity levels. With no disease pressures in 2015, the vines rebounded from their weak performances of recent vintages and produced a healthy crop of clean, perfectly ripe fruit that was mostly harvested between September 1 and 20. The skins of the grapes were thick but not leathery, and sugar levels, although on the high side, were buffered by healthy acidity. These are perfect conditions for producing concentrated and ageworthy but vibrant wines.

A number of producers that I visited this winter told me that because the grapes were so healthy and concentrated, they were able to work gently with their fruit, performing fewer punchdowns and pumpovers than usual. Careful extraction has contributed to the delicacy of the ‘15s, and it also explains the round, harmonious tannins that mark so many wines, even those from appellations where one might expect serious structure, as at Hermitage and Cornas. Another interesting aspect to 2015 is that since vines across the region achieved full or almost complete stem ripeness, many producers opted to include more whole clusters than usual in their fermentations. That has added an exotic measure of spiciness and floral character that I find awfully intriguing in Syrah. 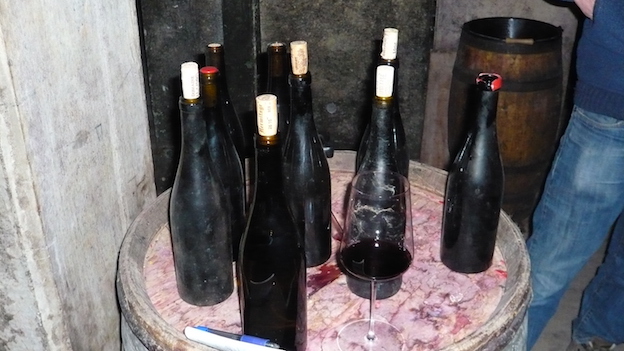 Tasting young and old wines in the cellars of J.L. Chave

This January’s four-day Marché aux Vins in Ampuis, an annual showcase for northern Rhône wineries and one of France’s most heavily attended public wine fairs, attracted the highest number of attendees in its 89-year history, with more than 25,000 tickets sold in total. I wasn’t surprised to hear this as in recent years more and more producers that I visit have been reporting a dramatic uptick in demand for their wines, both from the trade and from consumers who buy directly from the wineries. The short crops of 2014 and 2013 didn’t help matters but with 2015, which has received an enormous amount of often breathless coverage, demand for the best northern Rhône wines is currently at record levels.

More than a few producers told me that they’ve been surprised by how many of their customers have told them that they became more interested in their wines due to sharply rising prices for Burgundy and Bordeaux. In the case of Burgundy, recent vintages have witnessed often minuscule production and many long-time buyers have found themselves completely out in the cold. I’ve heard similar stories from Beaujolais producers about increased demand for their wines. What’s interesting, I think, is that when I asked if it wasn’t strange that a Burgundy aficionado would turn to Gamay or Syrah to satisfy a Burgundy craving, the explanation that I received was that many of these buyers had always indulged in northern Rhône wines (and Beaujolais) to some degree but that market circumstances now demanded that they increase their consumption of those wines.

In addition, many Burgundy aficionados are fixated on the minutiae surrounding small, closely defined vineyards and wines made by family producers in the Côte d’Or. They can find a strikingly similar culture in the northern Rhône valley and in Beaujolais, which gratifies their obsession with detail and – let’s be honest – scarcity, which drives much wine collecting. While it might not yet be quite as impressive to brag about your collection of Grandes Places or Viallière bottlings as it is to flaunt your stash of Bonnes-Mares or Chambertin-Clos de Bèze, that day may be upon us sooner than we think. 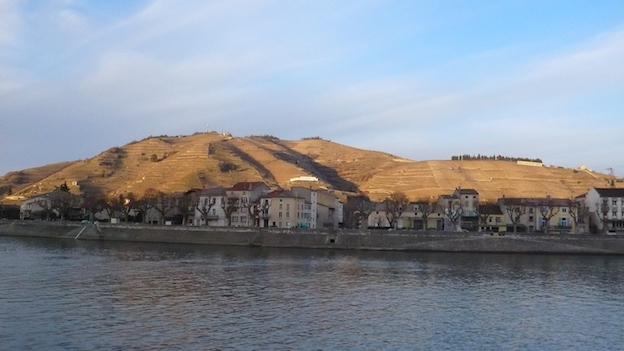 The famed Hermitage vineyards rise above Tain'l'Hermitage, as viewed from Tournon

I tasted all of the wines in this article during my annual trip to the northern Rhône region and its producers’ cellars in late January and early February of this year.